Arab journalists and members of Knesset protest for the release of Palestinian journalist Muhammad al-Qiq, who has been on hunger strike for 62 days and is close to death. 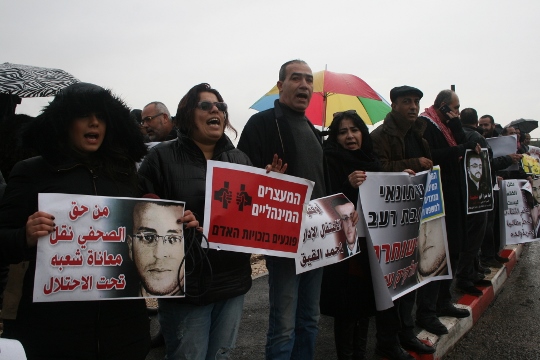 Approximately 40 journalists, activists, and members of Knesset demonstrated outside the Haemek Medical Center in northern Israel on Wednesday afternoon, calling for the immediate release of Palestinian journalist Muhammad al-Qiq. Al-Qiq has been on hunger strike for 62 days to protest against his administrative detention. His health has deteriorated significantly over the past few days, and his life is currently in danger.

The demonstration, organized by I’lam — Arab Center for Media Freedom Development and Research, included a number of Arab journalists from Radio A-Shams, Al-Itihad and news websites Al-Arab and Bokra, respectively. Members of Knesset Haneen Zoabi, Yousef Jabarin, Bassel Ghattas and Abdel Hakim Haj Yehiye, all from the Joint List, were also present. The protesters held signs in Arabic, Hebrew, and English against al-Qiq’s detention and in support of freedom of the press.

“Muhammad al-Qiq has become a symbol for journalists, as well as an example of a person who manages to be free in his thinking even when he is in detention,” Jabarin told +972. “His only sin was defending his people in his writing. In his hunger strike al-Qiq said he is challenging the powers of occupation and administrative detention, and that he is demanding to be either released or charged with a crime.”

Jabarin and Zoabi both say that they have been trying to visit al-Qiq for several weeks, and that the fact that they are members of Knesset gives them the right to visit any prisoner, but that the Israel Prison Service (IPS) has forbidden them from visiting him. The IPS has yet to respond to these claims.

Al-Qiq began his hunger strike four days after the beginning of his interrogation, when the latter understood that his interrogation was politically motivated. Sources close to Al-Qiq state that he was interrogated for “journalistic incitement,” and when he refused to cooperate, he was put in administrative detention for a period of six months, which can be renewed indefinitely. 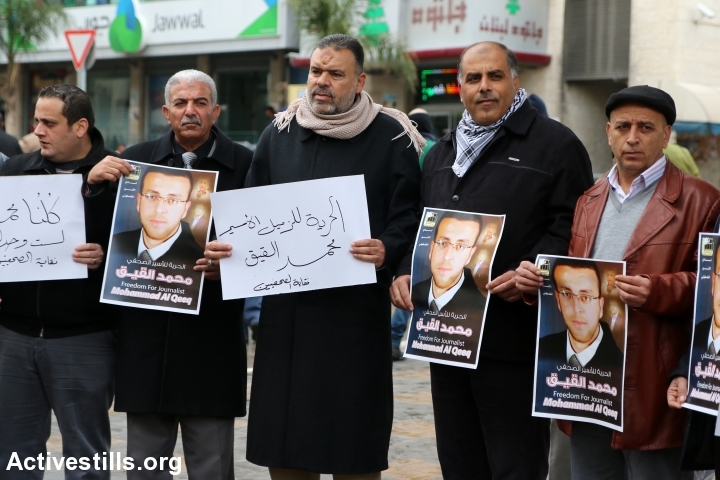 Palestinians demonstrate in solidarity with the journalist Muhammad Al-Qiq, 33, who has been on hunger strike for 62 days against his administration detention, Nablus, West Bank, December 31, 2015. (photo: Ahmad Al-Bazz)

Al-Qiq’s relatives claim that he is being persecuted for expressing his opinions as part of his job. The Shin Bet, however, claims he is a member of Hamas who was previously jailed several times due to his activities in the organization. His current arrest, according to the Shin Bet, came following “founded suspicions of involvement in terror activities with Hamas.”

“As part of our work, Arab journalists can meet with people who are classified as ‘enemies’ by the state, and if we speak to them out of our commitment to professionalism and journalism, this immediately makes us look suspicious,” says Khulood Masalha, who works for I’lam and helped organize the demonstration. “On the other hand, if an Israeli journalist travels to Syria or Iran, no one becomes suspicious.

Beyond the demonstration at Haemek Medical Center, more and more voices of dissent have been heard from the Palestinian Journalists Syndicate, as well as the Palestinian Authority’s minister of prisoners’ affairs. Israel’s High Court of Justice is set to hear al-Qiq’s case on Wednesday.

Most of the journalists at Tuesday’s demonstration found themselves in the unusual position of being both protesters and reporters. I was in the same position. It is important to report on the journalists’ campaign for al-Qiq’s release, but as a journalist it is clear that I, too, must join.

No, we do not know why al-Qiq is being detained. The Shin Bet claims it has nothing to do with his opinions, but due to the lack of charges or due process, it is impossible to accept these claims at face value. Furthermore, al-Qiq’s family members, along with his attorney, the Palestinian Journalists Syndicate, and I’lam say that Israel has been arresting Palestinians for expressing criticism of the Palestinian Authority, including members of the Palestinian Legislative Council.

“Muhammad al-Qiq has an Islamic agenda, and I may very well disagree with his agenda,” says Masalha. “But Israeli journalists also have agendas and interests that I do not always agree with, and I will stand with Israeli journalists who are arrested. This is the test of collegiality.”

emailemailemail
Before you go…
A lot of work goes into creating articles like the one you just read. +972 Magazine is nonprofit journalism, owned by many of our writers, editors, and journalists. In order to safeguard that independent voice, we are proud to count you, our readers, as our most important supporters. With your support, we can keep +972 Magazine a strong, independent, and sustainable force helping push the global discourse on Israel/Palestine.
DONATE
More About Muhammad al-Qiq 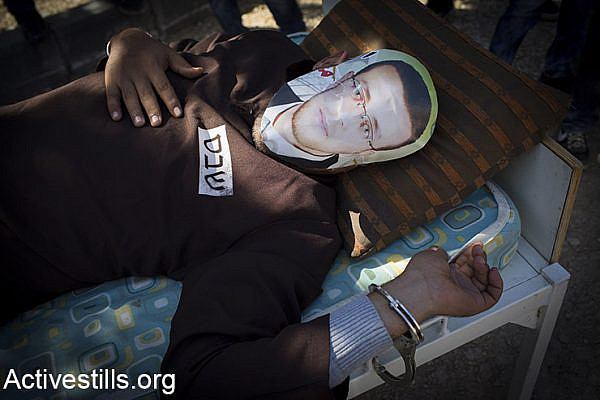 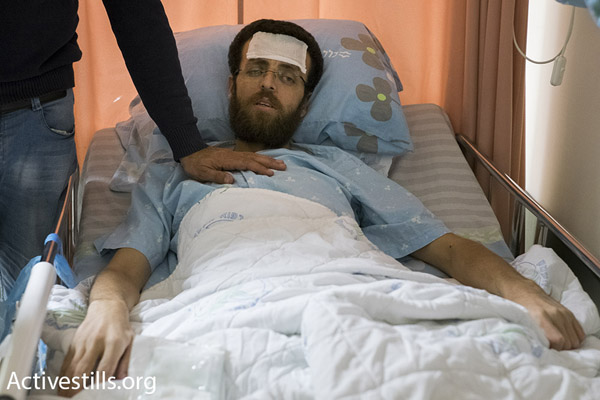 Palestinian journalist reaches deal to end 94-day hunger strike
Israeli authorities promise to shorten Muhammad al-Qiq’s administrative detention order, not renew it. Palestinian hunger striker Muhammad al-Qiq ended a 94-day hunger strike on Friday after his lawyers struck a deal with Israeli authorities. Al-Qiq, who has been in administrative detention since mid-December, will not be transferred to Al-Makassed hospital in East Jerusalem, as he had…
By Edo Konrad February 26, 2016 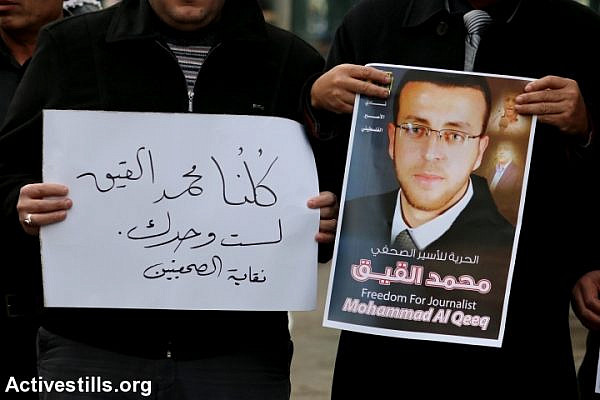