UPDATE: At the end of the Knesset hearing Tuesday, MK (Kadima) Yulia Shamalov Berkovtich said that “All human rights activists should be imprisoned and transported to camps we are building,” referring to a facility now being constructed in the south to hold African refugees.  She referred to those aiding refugees as “hypocrites” that incite against Jews.

After the controversy in which Likud MK Miri Regev denied (documented) footage of her calling Sudanese a “cancer,” National Union MK Michael Ben-Ari defends use of the term at Knesset special hearing.

On Tuesday morning, the Knesset Committee on Internal Affairs and the Environment held a special session to discuss the African “infiltrator problem.” MKs made comments calling on Africans to be moved to tent encampments, claimed most Africans carry diseases and demanded that they be deported immediately.

Six human rights NGOs, among them the Association for Civil Rights in Israel and the Hotline for Migrant Workers, announced their refusal to join the Knesset discussion in a letter to Knesset Speaker Reuven Rivlin, explaining that they see it as a platform for  “wild incitement” against asylum seekers and human rights organizations – and not as a practical means to a solution.

According to reports and tweets from the discussion, MK Danny Danon blamed leftists for the rape of a 15-year old girl committed by Africans. MK Michael Ben-Ari said that MKs Regev and Danon “did good work” (referring to their incendiary comments at last week’s rally that ended in violence), but added that this discussion does not count for anything if the “prime minister doesn’t wake up” (my translation from live broadcast).

Ben-Ari also made a point to defend Regev’s comment that Africans are a cancer, but didn’t actually say the word “cancer,” instead expressed that he would happily reiterate the sentiment were it not to draw outrage from some MKs.

In an interview with Israeli media following the race riots last Wednesday in south Tel Aviv, Likud MK Miri Regev denied calling Sudanese a “cancer,”  claiming she was merely comparing the “phenomenon” of cancer spreading in the body to the “phenomenon” of African asylum seekers entering the country.

A video of MK Regev – who used to serve as the IDF’s spokesperson –  denying her statement has gone viral on Facebook in Israel, cutting between her denial of the statement with her explicit assertion in front of a large crowd in south Tel Aviv last week that the Sudanese community here is indeed like a cancer that spreads.

I compared the phenomenon to the

phenomenon of cancer that spreads in the human body.

I did not for a moment say that the Sudanese are a “cancer.”

The Sudanese are a cancer in our body!

(Cut back to interview):

I did not for a moment say that the Sudanese are a cancer.

The Sudanese are a cancer in our body!

I did not for a moment say that the Sudanese are a cancer.

The Sudanese are a cancer in our body!
In addition to her hateful comments, MK Miri Regev must also not be informed about the fact that most Africans in Israel are from Eritrea, not Sudan.

Another video against Africans made headlines on Monday, depicting an Israeli youth throwing an egg directly at a Sudanese man and then laughing.

You would think that with all of Israel’s technological expertise and pioneering in the hi-tech industry – including the invention of USB flash drives and instant messaging – combined with its obsessive efforts at Hasbara (Israeli PR), that its public officials would be a little more conscious of the power of social media.

emailemail
Before you go…
A lot of work goes into creating articles like the one you just read. +972 Magazine is nonprofit journalism, owned by many of our writers, editors, and journalists. In order to safeguard that independent voice, we are proud to count you, our readers, as our most important supporters. With your support, we can keep +972 Magazine a strong, independent, and sustainable force helping push the global discourse on Israel/Palestine.
DONATE
More About Eritreans 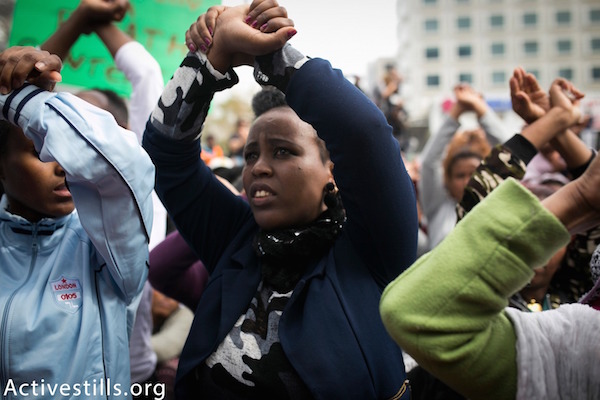 Live blog: Global protests against Israeli plans to deport refugees
Protests are expected outside Rwandan embassies around the world Wednesday as Israel moves forward with its plan to deport tens of thousands of asylum seekers, most of whom fled Eritrea and Sudan. By +972 Magazine Staff [This live blog has ended.] Activists hope Israel’s deportation plan can be stopped if Rwanda pulls out of its…
By +972 Magazine February 7, 2018 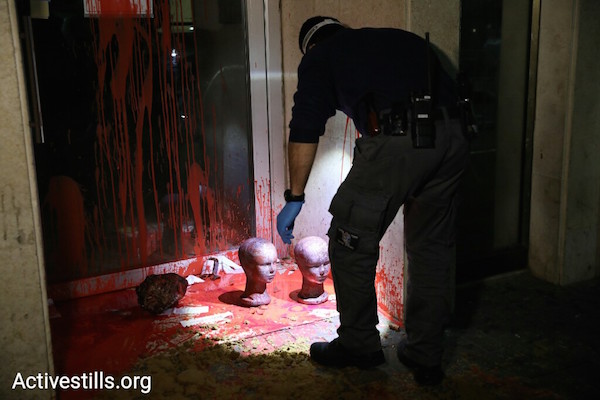 Following protest, Interior Ministry refuses to accept asylum requests
Activists splashed red paint and left mannequin heads at the entrance to the Population and Immigration Authority’s office in Tel Aviv. The Interior Ministry decided to collectively punish the asylum seekers in response. The Israeli Interior Ministry said it was refusing to process any asylum claims Sunday morning as a collective punishment of sorts in…
By Joshua Leifer January 28, 2018

Asylum seekers to Israel’s president: ‘Look us in the eyes’
Israel plans to begin deporting tens of thousands of Eritrean and Sudanese asylum seekers in the coming months. Hundreds gather outside the President’s Residence in Jerusalem, hoping to tell him their stories. By Yael Marom Several hundred asylum seekers from Eritrea and Sudan demonstrated in front of Israeli President Rivlin’s official residence in Jerusalem Monday…
By +972 Magazine January 23, 2018