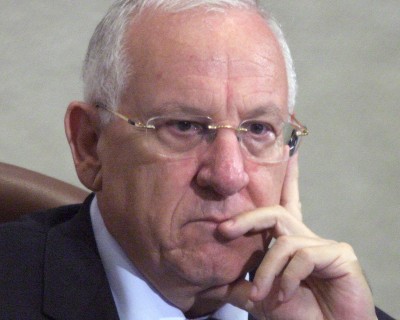 Haaretz reported yesterday  that Knesset Speaker Reuven Rivlin appears to have gone One State. Rivlin, a veteran and decidedly right-wing member of the Likud, told the Greek Ambassador:

“I would rather see Palestinians as citizens of this State than partition the land.”

This is quite a crack in the Israeli consensus on the two-state solution – but it’s only the last of many. Since last year, Likud firebrand MK Tzipi Hotovely has been campaigning for a solution to the conflict that doesn’t involve the evacuation of settlements – even if that means annexation of the OPT and citizenship rights for all Palestinians. On the Left, former deputy-mayor of Jerusalem, Meron Benvenisti, surmised in a landmark essay that the bi-national reality is already upon us, and sociologist Yehouda Shenhav  called out the Israeli leftists for using the issues of 1967 to avoid dealing with the much larger issues of 1948.

Meanwhile on the ground, in a development that confounds all local notions of Left and Right, a group of settlers have launched a movement calling to share power rather than divide the land – with many calling for a bi-national state from the Jordan to the Mediterranean and acknowledging the Palestinian Right of Return. Yesterday, the movement held a joint protest by settlers and Palestinians (!) against the construction of the separation wall, and they say there is more to come.

It should be noted that Rivlin (whose familiy, apropos nothing, had been in Palestine for over 200 years and whose father translated the Koran) already made a tentative foray toward bi-nationalism in  August 2009. At the time, Rivlin – highly unusually for a top Likudnik  – acknowledged the Palestinian trauma of 1948, and called for a “new partnership” between the Israeli Jews in Israeli Arabs:

“The establishment of Israel was accompanied by much pain and suffering and a real trauma for the Palestinians (in large part due to the shortsightedness of the Palestinian leadership). Many of Israel’s Arabs, which see themselves as part of the Palestinian population, feel the pain of their brothers across the green line – a pain they feel the state of Israel is responsible for.”

“Many of them encounter racism and arrogance from Israel’s Jews; the inequality in the allocation of state funds also does not contribute to any extra love.”

“It is a group with a highly defined shared national identity, and which will forever be, as a collective, an important and integral part of Israeli society…. We, the Jews, must send out a clear message that it is apparent to us that our homeland is their homeland, and that we intend to live together with them, and that we reject all the calls for forced immigration or even expulsion.”

Collective identity – the acknowledgement of which enables dialogue on collective rights – had been somewhat of a taboo for the centre-Liberal-Left in Israel, which forever hoped the Israeli-Palestinian conundrum within the Green Line can be resolved through upkeep of individual civil rights and economic opportunity.

It’s may or may not be coincidence within months, two important Israeli Palestinian parliamentarians voiced acknowledgement of the trauma of the Holocaust and its relevance to the conflict. Jewish-Arab socialist HADASH party chairman Mohammad Barakeh joined a delegation of MKs to  Auschwitz. MK Ahmed Tibi, the one Arab politician Israelis absolutely love to hate, swept the Knesset and Israeli Jews off their feet with a profoundly moving speech for the International Holocaust Memorial Day, in which he took care to hit out at Holocaust denial in the Middle East. To see for yourself what an impact the speech has had on the Israeli mainstream, watch this interview with ultra-centrist pundit Yair Lapid.

Looking for a Paisley or De Clerk

All this is happening against the backdrop of a rapidly radicalising mainstream, and the elder and the younger Likud parliamentarians remain very conservative on quite a few scales – Rivlin famously opposed the disengagement from Gaza, challenged the Supreme Court for intervening with legislation (the context being the Court slamming down unconstitutional and radical right laws), and recently announced that ‘Hitler lives in Tehran”; Hotovely’s vision includes retaining the Jewish character of the state and ofsetting the nearly 50-50 Jewish-Arab balance in the electorate such a move would imply by “bringing in 1,000,000 more Jews to Israel” (good luck with that).But between them, Rivlin (70) and Hotovely (30) represent two generations and significant trends in the now-ruling party, and their very voicing of such sentiments and ideas forces a tremendous wedge into mainstream discourse.

More importantly, they are taking on the challenge most public figures in the region are shrinking from: Imagining Israel-Palestine beyond the two-state solution. On Tuesday, I attended a talk at the Truman Institute by the elaborately titled United Nations Special Coordinator for the Middle East Peace Process and UN Secretary-General’s Personal Representative to the Palestine Liberation Organization and the Palestinian Authority, Robert Serry. The talk was titled “Is the Two-State Solution Fading? The View from Damascus, Cairo and Jerusalem.”

Serry barely mentioned Damascus and steered quite clear of Cairo; but most disappointngly, he didn’t utter a word about how a post-two-state-paradigm region would look like – a question in which I take a vital interest, since I don’t believe the entire eastern coast of the Meditarrenean will fall off into the sea; we’d still have to deal with each other in some framework or another. Finally, an exasperated member of the audience asked Serry if the UN at least had a Plan B for the eventuality the two-state solution is dead beyond resusication. Serry’s answer was: “Well, in a nutshell, no.”

I’d love to be proven wrong, but it seems to me this is the answer most officials and policy-makers in the region would give to that very question – and there’s nothing more dangerous than careering to such a tremendous, yet entirely plausible political transformation, without the slightest idea of what to do when we get there.

Now, some people on the Israeli right are rising to the task. Do they realise how many privileges they and their electorate will need to give up to get to a sustainable one-state scenario? Are they mere harbingers, or can they themselves deliver? This remains to be seen. But it  appears that having tired of the somewhat self-pitying, self-righteous and a-historic wait for a “Palestinian Mandela”, a tentative, hardly conscious search begins for an Israeli F.W. De Clerk or Ian Paisley; and as Gerry Adams recently quipped of the latter, you must never say “never, never, never.”