In an appeal that demonstrates the complete bankruptcy of the peace camp, the Israeli Labor Party is  calling on its British counterparts to oppose the motion on Palestinian statehood Monday, ‘in the name of peace.’ Netanyahu couldn’t have put it better. 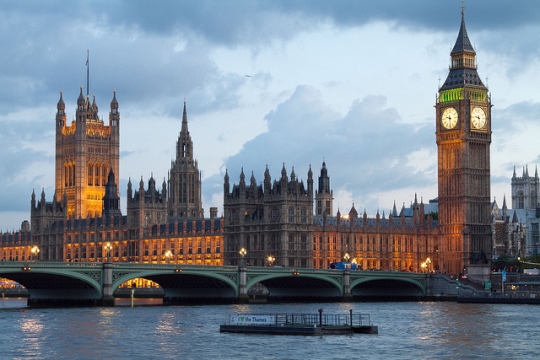 The British Parliament will vote Monday on a motion supporting the Palestinian Authority’s request to recognize it as a state. The vote is mostly symbolic, and the British government will still be able to take any form of action it wants. The big drama is taking place within the ranks of Labour. The opposition party is supporting the motion, but Israel is hoping to get as many MPs as possible to defy the party line and oppose. Apparently, a real controversy is taking place.

The call to recognize independent Palestine is just about the last card in Mahmoud Abbas’ hand, apart from dismantling the Palestinian Authority, which is a highly risky move that could lead to unknown consequences throughout the region. Abbas, like any sensible observer, finally realized that Israel has made up its mind to reject the two-state solution. Even if Abbas was to recognize Israel “as a Jewish State” – even if he was to join Likud – there is a consensus in the Israeli leadership against withdrawing from the Jordan Valley and East Jerusalem. This alone makes any two-state solution impossible, before even getting to issues like refugees or the fate of the settlements.

Netanyahu made his position on the Jordan Valley and Jerusalem clear to John Kerry, and has repeated it publicly since. The war in Gaza didn’t change Israel’s mind – in fact, it made it even more determined to maintain the status quo.

Abbas is therefore trying to get the international community’s help in creating diplomatic momentum that might make Israel reevaluate its policies. Recognizing Palestine won’t change a lot on the ground, but it will make it clear to Netanyahu’s government that the world doesn’t accept the status quo — like Israel does — as the preferred option for the foreseeable future.

It is surprising, therefore, to see who is leading the Israeli government’s effort to reject the motion in the British Parliament. Haaretz reported Sunday morning that the Israeli Labor party chairman (not to be confused with the party leader), member of Knesset Hilik Bar, sent a letter to members of the British Labour Party explaining that symbolic recognition of Palestinian statehood will make peace “less, rather than more likely.” Bar is calling UK’s Labour to oppose “unilateral moves” that would only make efforts towards peace less popular with Israelis.

It is only in the twisted world of Israeli-Palestinian politics that appealing to the international community and its most respected institutions is considered to be a “unilateral measure,” while actually changing the reality on the ground — as Israel has been doing for decades — isn’t. But let’s leave semantics aside and focus instead on the case the letter making.

MK Bar is not just the chairman of his party and the head of its foreign policy forum, he also leads the two-state caucus in Israel’s Knesset. Knowing his foreign audience all too well, he is using the only argument that still works for Israelis: that any move against the occupation will only play into the hands of the Right and prolong the occupation. But according to his logic, the international community should support Israel’s right-wing government in all its actions, teach Abbas a lesson that will prevent him from trying to challenge Jerusalem again, and wait for Israelis to change their minds about the occupation, of their own volition, at some undefined point.

For some reason, for a very long time most of the world thought that this was the best course of action. It took five years with Bibi, three wars in Gaza and record-setting settlement construction to make some reconsider. Not Bar and his friends, though. Even though Netanyahu failed to mention the notion of a Palestinian state during his speech at the UN, even though settlers invaded Palestinian neighborhoods in East Jerusalem, and after a bloody war in Gaza which was all about maintaining the status quo, they are still trying to convince us that the way to advance the cause of peace is by helping them promote right-wing policies, even as they sit in the opposition.

If Bar and his friends had minimal integrity, they would have dismantled the two-state caucus and declared it will only reconvene when there is an actual plan to discuss. If they were a bit more cunning, they would have realized that international pressure on Netanyahu would play into the opposition’s hands — that is, if the opposition has an alternative to offer regarding the Palestinian issue.

But Labor gave that up years ago. By now, the party has become accustomed to its role as the Likud’s spare tire. The only real debate you get in Labor is on the right timing to join the collation and the perfect moment to pretend being in the opposition — exactly as Tzipi Livni and her party function, by the way. Both Labor and Livni trade places from one Netanyahu government to the other – previously Labor was “promoting peace” within the coalition and Livni was talking about “the need to negotiate” from the opposition, and now it’s the other way around – Livni is in charge of negotiations inside the government and Labor is “promoting peace” from the opposition.

The only unbelievable aspect of this charade is the fact that there are still people who take it at face value. I kid you not: there are actually people convinced that the two-state caucus has something to do with the two-state solution. There are still people addicted to the Israeli Orwellian talk about the importance of negotiations. And when Labor or Livni stop talking about diplomacy and peace for a moment, those people become concerned that something might be wrong. The real problem is their failure to spot the lies that they have been fed for so many years by the heads of the Peace Camp.

When it comes to the occupation, there is not much difference between the Right and most of the Israeli Left. Both sides agree on the need to deal with the Palestinians through military force; both agree on the settlements (make no mistake – the disagreement is about their location, on what makes “a legitimate” settlement, and not on the principle of settling occupied land); both view Palestinian diplomacy as a threat. And most importantly — both see the diplomatic process as a constant attempt to form an Israeli consensus and then shove it down the Palestinians’ throat. This is exactly what MK Bar’s letter was all about.

Personally, I think that Abbas’ strategy probably reached a dead end. Right now, the necessary recalculation goes beyond a move at the UN or the identity of the next mediator. But before that, people should simply stop and listen to MK Bar and other heads of the so-called Israeli peace camp. On every major issue, they simply echo what Netanyahu and Liberman say, though with a different tone. So why not take it from the horse’s mouth?

Labour MPs, make no mistake: By opposing Palestinian statehood you won’t make negotiations resume, and even if they do, the Palestinian side will be weakened so much that nothing will come out of them – exactly as happened in previous rounds. Vote yes for Palestinian statehood. You will not make your Israeli counterparts at Labor any happier, but you’ll do the right and just thing. And by doing so, you might even help advance the cause of peace.