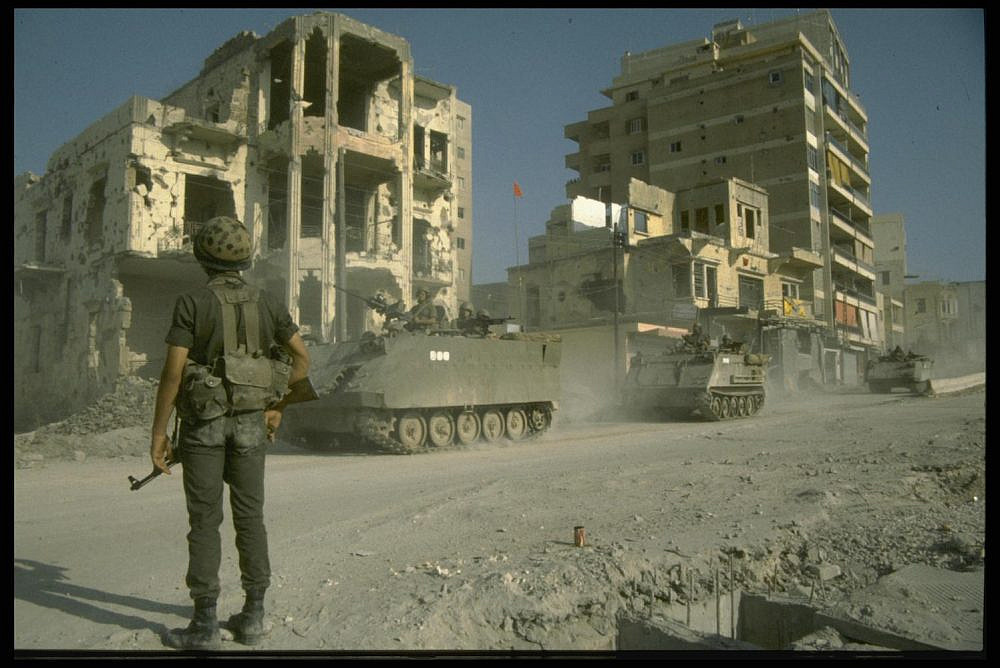 Israeli soldiers pass through the city of Sidon southward during the Lebanon War, April 9, 1983. (GPO)

“I’ll try and tell you what I feel about May 25th now that two decades have passed by,” says F., who, like me, will remain anonymous for his own safety.

F. is a friend from southern Lebanon, someone who has witnessed the occupation of his entire world by a foreign power, Israel. Given that I am from Mount Lebanon and therefore part of a community that has primarily experienced a foreign occupation by Syria, I wanted his voice to intersect with mine to provide a full picture for May 25th, when Lebanon officially commemorates Liberation Day.

Twenty years ago today, southern Lebanon was liberated. The resistance to the Israeli occupation, which began in 1982, was led, particularly in the 1990s, by Hezbollah. This understandably earned the group unprecedented popularity among Lebanon’s population.

But now a new generation of Lebanese has since grown up, and it is increasingly defined by the 2011 uprisings across the Arab world and their bloody, devastating aftermaths, in which Hezbollah played a significant role. 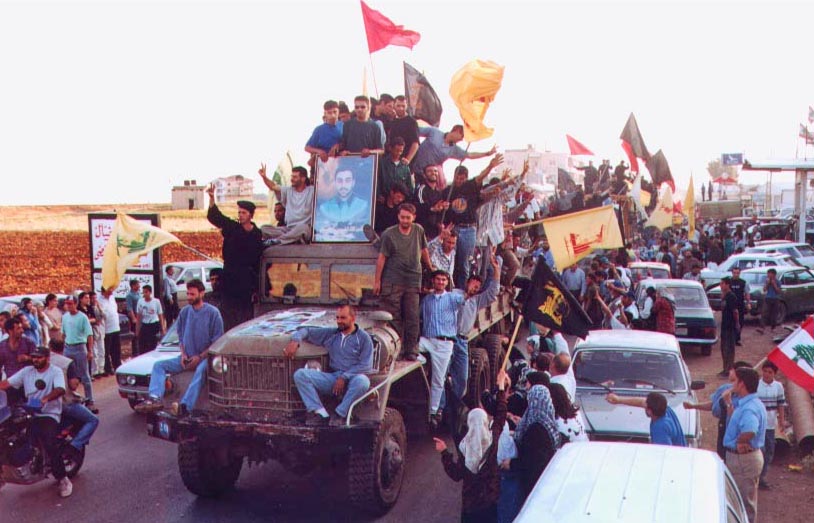 Hezbollah members and supporters hold a parade following the end of Israel’s occupation of southern Lebanon. (Khamenei/CC BY 4.0)

For that reason, the Syrian revolution holds particular significance for Lebanese anti-authoritarians who have grown disillusioned with grand narratives that previously swept entire generations of activists and militants into revolutionary fervor. Furthermore, it is for that reason that Hezbollah’s relationship with Bashar Assad’s regime in Syria has led F. to reconsider the very meaning of Liberation Day.

What is remembered, what is forgotten

Meanwhile, the country has also witnessed two separate military occupations, one by Israel and the other by Syria’s successive Assad regimes (1976 to 2005). For 18 years, both occupations co-existed, defining both our parents’ generation as well as ours.

Until the 2000s, Hezbollah mostly avoided targeting other Lebanese civilians openly, focusing instead on a broad front of resistance against Israeli soldiers and firing rockets at Israeli civilians in northern Israel. Founded in 1982 and declared in 1985, the Shia group was created as part of the Iranian government’s policy of wilayat al-faqih (“guardianship of the Islamic jurist”) in order to continue the Islamic revolution under the auspices of the Ayatollahs.

With Syrian help, Iran provided everything that a resistance movement needs: money, weaponry, an ideological top-down structure, and all the required religious justifications. Ever since, Hezbollah has been organically connected to the Iranian government’s foreign policy; Hassan Nasrallah, who has led the organization since 1992, never misses an opportunity in his speeches to remind everyone of just that. 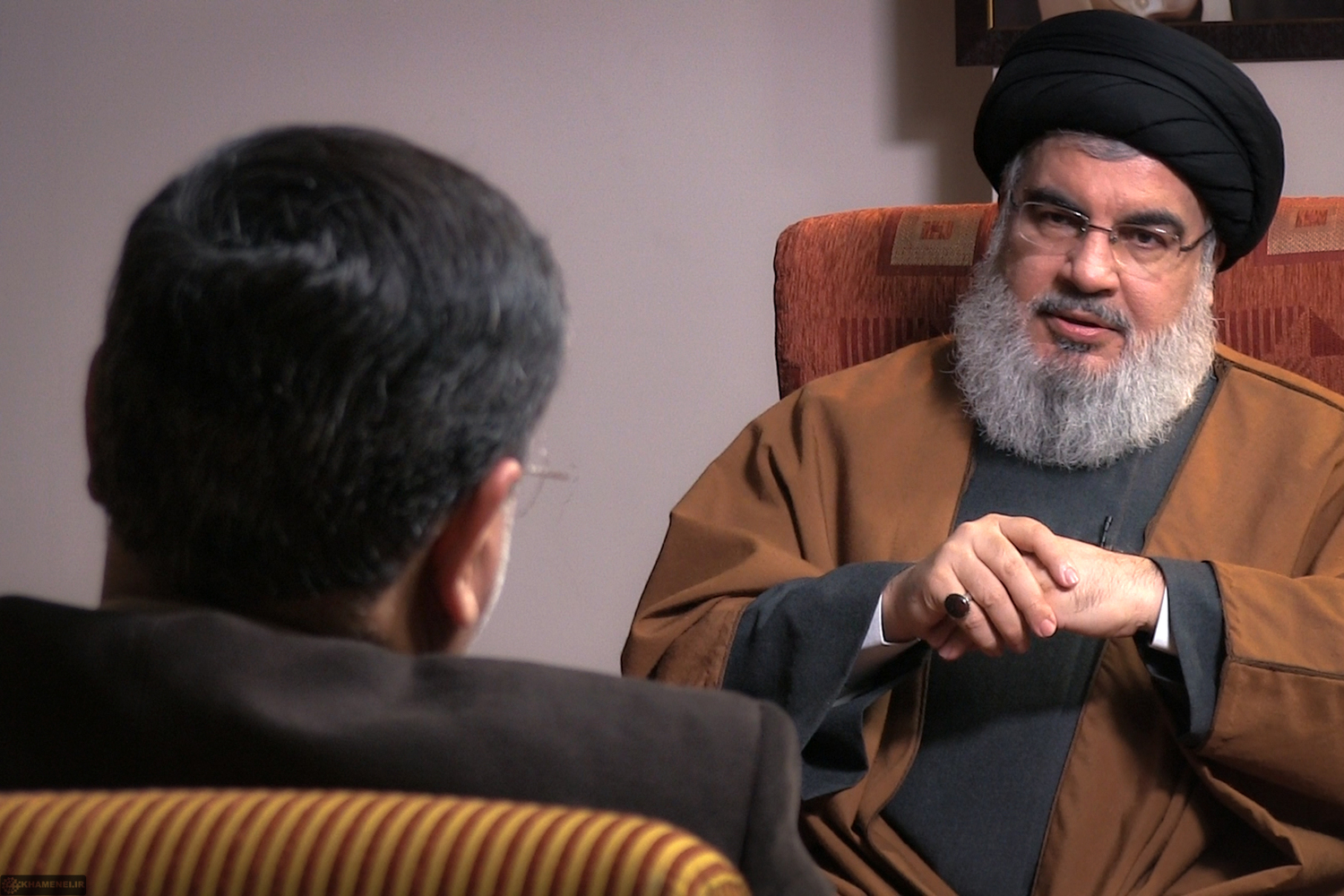 Hassan Nasrallah during a discussion with officials from the office Ayatollah Ali Khamenei. (Khamenei/CC BY 4.0)

But as a resistance group, its very existence would not be possible without Israel’s brutal occupation of southern Lebanon. It is in the fires of the occupation that Hezbollah was forged.

The notorious, Israeli-backed South Lebanon Army (SLA) regularly shelled civilian areas suspected of harboring resistance fighters against the occupation. The SLA-run Khiam Prison near the southern border held hundreds of prisoners and repeatedly denied access to the International Committee of the Red Cross, despite widespread allegations of torture. Like many people from south Lebanon, F. grew up accustomed to seeing Israeli bases all around him, and tales of SLA and Israeli torture molded the consciousness of many Lebanese.

The more Israel and the SLA brutalized the locals in southern Lebanon, the more Hezbollah’s popularity grew. Since then, Israel and Hezbollah formed a symbiotic relationship. For the Shia organization, Israel is the permanent source of all evil and, therefore, any action can be justified in the name of “the resistance,” including invading Syrian soil. To the Israeli establishment, Hezbollah is but the latest in a long list of Arab groups whose hatred of Jews knows no limits, and whose permanent threat can be used to justify its settler-colonial policies, its blockade on Gaza, and two wars in Lebanon. 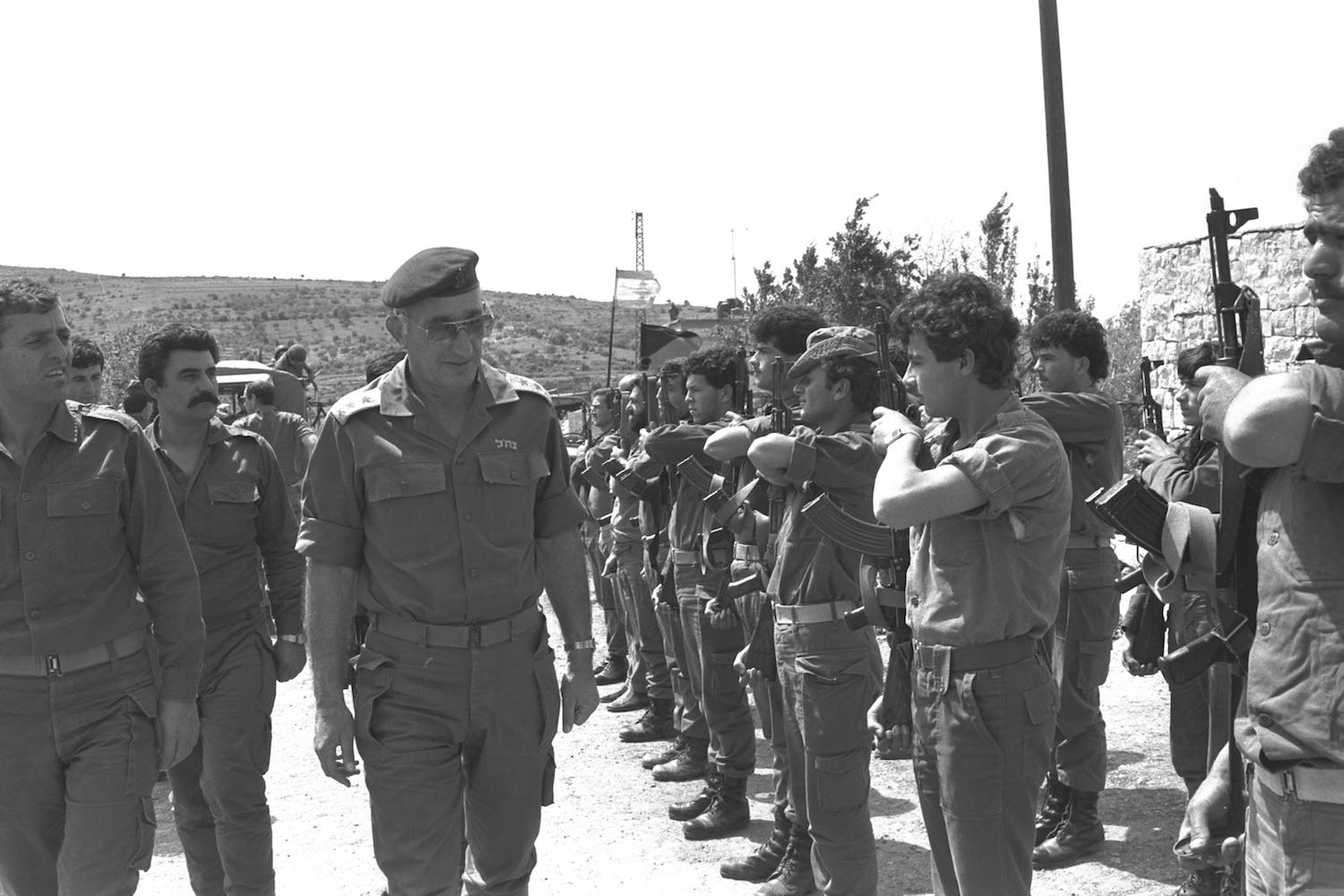 Today, many Lebanese can no longer speak favorably of Hezbollah, despite its success in kicking out the Israelis. “I’m not sure if [Liberation Day] is a big deal anymore,” F. says. “It was a big deal. I’m not sure if it still is, [ever] since 2013, when Hezbollah’s involvement in Syria began to be very explicit.”

On Liberation Day in 2013, Nasrallah announced that his troops were in Syria and were going to fight on the side of the Assad regime, Lebanon’s former occupier. Behind him read the words “an unbreakable will.”

On that day, Nasrallah confirmed what Syrians had known for at least a year. In an instant, he personally linked the liberation of southern Lebanon to support for Assad, thus cheapening the lives of those who died in the resistance against Israel. Hezbollah’s superior military experience would prove immensely valuable to the Assad regime, a regime so unpopular it needed both Iranian and Russian support even after Hezbollah intervened.

The cruel irony — that Hezbollah’s superior military experience, a result of fighting against Israeli forces, was now being used to aid the Assad regime — wasn’t lost on anyone.

And yet, today F. must constantly defend himself against accusations by Hezbollah supporters of harboring pro-Israel sympathies. After all, he knows firsthand where certain accusations can land him. F. has to make sure that whomever is listening knows that he opposes Israel. 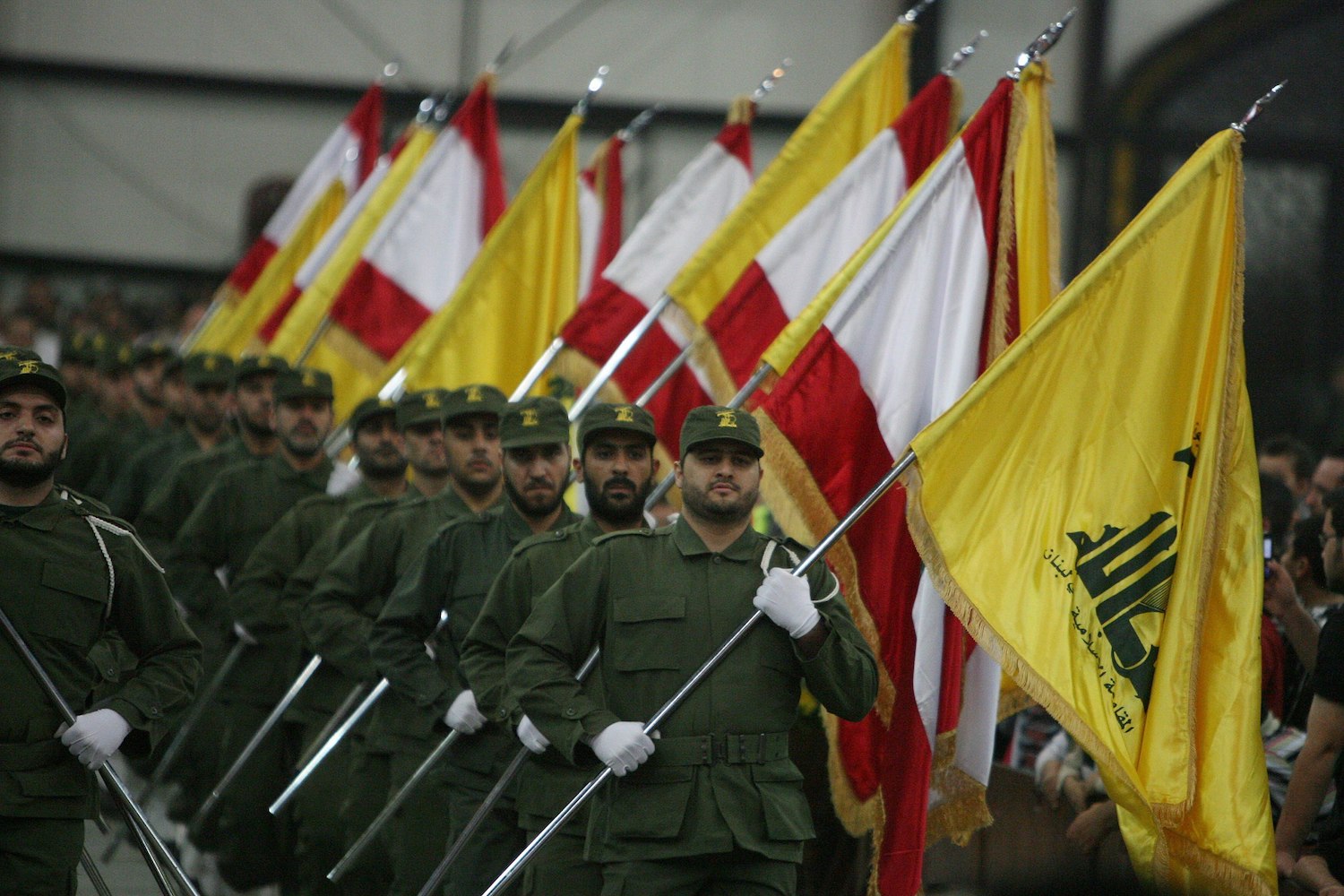 Hezbollah fighters march during a ceremony. (khamenei.ir/CC BY 4.0)

F. and I grew up in a country that has grown accustomed to military occupation. This created a habit among the Lebanese of being precise with our words, lest we be accused of foreign loyalties or sectarianism. It doesn’t matter that F. is from southern Lebanon anymore that it matters that the author of this piece is part-Palestinian. In fact, it is precisely our identities that have made us vulnerable in Lebanon ever since Hezbollah forced us to choose between Israel and Assad. But we are among those who refuse to choose between oppressors.

Syria was the final nail in the coffin of “the resistance,” but not of the act of resisting itself. In fact, before and ever since Nasrallah used Liberation Day 2013 to announce his group’s complicity in supporting one of the most brutal regimes in modern history, Syrians were resisting and continue to resist the multiple foreign occupations of their country, including that of Hezbollah.

It is for that reason that anti-authoritarian Syrians, not Hezbollah and its supporters, are most deserving of commemorating Liberation Day. What Hezbollah helped start it has since helped destroy; today Syrians are the ones embodying the spirit of resistance.

This is the reality of a self-declared anti-imperialist militia declaring solidarity with Palestinians while proudly standing over the bodies of Syrians and Syrian-Palestinians. This is the deeply rotten core of modern Lebanese politics, so rotten it would make Israeli politicians proud.

Joseph B. is a Lebanese-Palestinian writer.