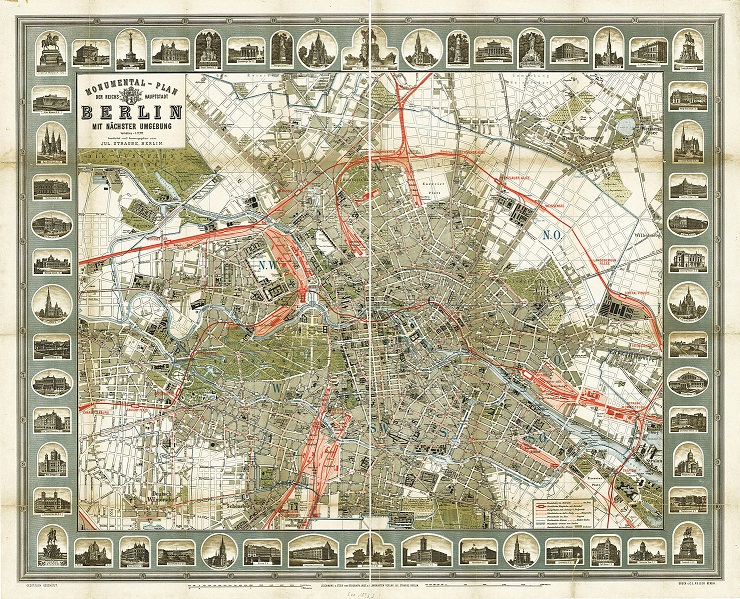 Berlin used to be split down the middle, though not as neatly as this white fold runs. (Julius Straube, 1896)

I walked in beauty. I walked in fire. Early morning matured into fully boiling day just as the trail led me from shady forest into pastures. Above me soared rocks in outlandish angles that seemed carefully measured so as not to shield me from the sun. Each village spring was a life saver. One farmhouse advertised cheese. I knocked, craving the cool of their cellar far more than the cheese itself.

Somehow I persisted, climbing to the town of Grindelwald, then beyond it. The mountains grew greater, nearer. Over the cliffs appeared the glaciers that worried Theo. They truly were melting, and water gushed down to the valley. The child of a land of few waterfalls, I couldn’t stop taking cellphone photos and posting them. Likes poured in by the hundreds.

Even at 1,500 meters I remained bare chested, cursing the straps of my backpack and guitar case. Oxygen was becoming scarcer and I rested more and more frequently, taking in the gradually expanding vistas of the valley below me. I had to push through. A lady at Grindelwald’s tourist information office booked me a bed at a hikers’s hut, directly above the tree line. I had to reach it before dark – and did. It was lost in a cloud, the first I had seen all week, and as I stepped in, rain began to pour outside.

Except once, in a sense.

Anna, a German journalist and a friend, smuggled me past the border fence in 2005. The IDF gave her permission to visit Ghajar, a village split between Israel and Lebanon, and to bring a translator along. My German and Arabic are both south of limited, but friendship gets you places. 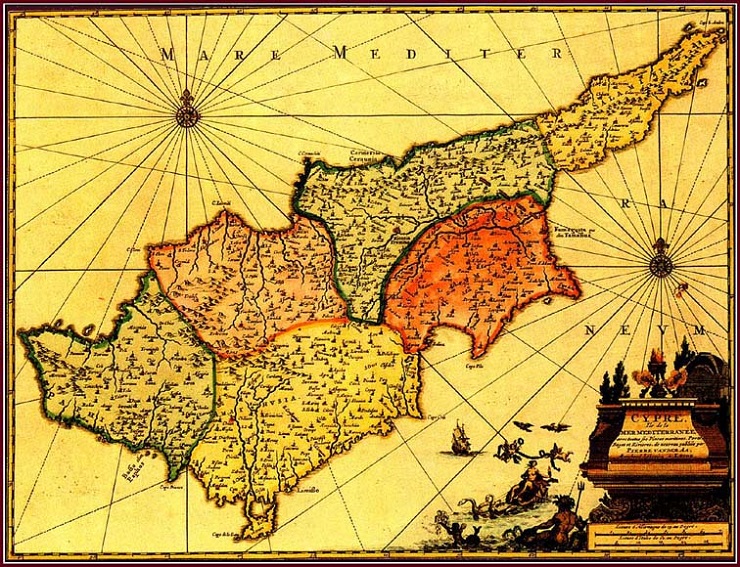 Nicosia/Lefkosia, the capital of Cyprus, is still a divided city, though far more mildly than before. (Pieter van der Aa, early 18th century)

Here’s how Ghajar got to be this way: It expanded into Lebanon while Israel occupied the country’s southern region, following the war of 1982. No Israeli citizens were allowed into the occupied land, Where the IDF and its allies were at constant war with Hezbollah, but Ghajar’s townsfolk are Alawite Arabs and their town is in Golan territory, so no one paid much mind when they did go there, and built.

Then, in the year 2000, after nearly two decades of futile war, Israel backed out of Lebanon, and the border became a border once more. Rather being split down the middle, Ghajar became its own planet. The ultra-secured border fence was planted south of it, separating it from Israel. The townsfolk normally commuted south, to the Jewish town of Qiryat shemona. None of them worked in Lebanon and they were not on good terms with Hezbollah.

Undeserved to begin with, and dismissed as a magic portal for drug smugglers, the town got kicked out of its respective country. Hardly any outsider could obtain a permit to visit it, and even the one I did obtain was limited to the south side. I was told the border is a street, and that I am not to cross that street.  The night before riding north with Anna, I dreamed that we did cross it, together. On the far side was a circus tent. That is all I recall.

She picked me up early with her rental car. We drove north past Tel Aviv’s high-rise suburbs, past orange groves and dunes and patches of eucalyptus, all studded with too much trash, too much commerce. Within two hours, the density of the coast gave way to the serenity of the far north. It was winter, the green season, and the valley that separates the Golan Heights and the Mountains of Naftali is the land’s greenest stretch. Its orchards and fields seem to extends hundreds of miles further north, and do, in fact, but not for us.

Soon we turned to a tiny road that wound through pastoral mine fields, then reached the fence. We had to curve around sixteen cubes of gray concrete to reach the checkpoint. A soldier took our IDs, called in with the authorities and then warned us: “Don’t cross into Lebanon.” He then let us drive on, across the fence.

We were on a pleasant street lined with miniature palm trees. Where was the border? Clearly to the north, but how far? A block? Two blocks? There was no parking to the south, the alleys were too slender and the fence of a school touched right down to the street. I looked north and saw a Hebrew sign: “Israeli Ministry of Health, clinic for mother and child.” “That’s Israel,” I told Anna. “Let’s park there.”

We did, then walked back to the palm lined street, to visit town hall. In the lobby hung two large satellite images of the town. The border was marked on both: a dotted blue line. It ran directly along “Palm Street.” Having properly driven on the right side of the road, we appear to have been in Lebanon ever since leaving the checkpoint. Our car was parked inside Lebanon. Town hall was in Lebanon.

The mayor was absent and we met with the town treasurer, who described life in his hometown as “impossible.” “You have a heart attack here, the ambulance can’t come in. It has to wait for you at the checkpoint. You could die three times on the way.” He apologized for what he regarded as flawed hospitality. “I would like so much to host you in my home, but cannot. My home is in Lebanon.”

We deducted that town hall was just near enough to Israel to count as neutral territory, but the streets north of the clinic were properly abroad. “No worries,” Anna calmed the treasurer, “We really appreciate you seeing us. We’ll just take a stroll around the old part of town and move on.”

We stepped out just as the school’s bell rang and children poured to Palm Street. Anna crouched and photographed them walking hand in hand across the dotted line that was also the blue dotted line. A few weeks earlier, Hezbollah and the IDF held a shoot-out over this precise stretch of asphalt. Four Hezbollah combatants were killed and the IDF’s position inside the village was abandoned. The children were kept in the school. None were hurt, not physically. 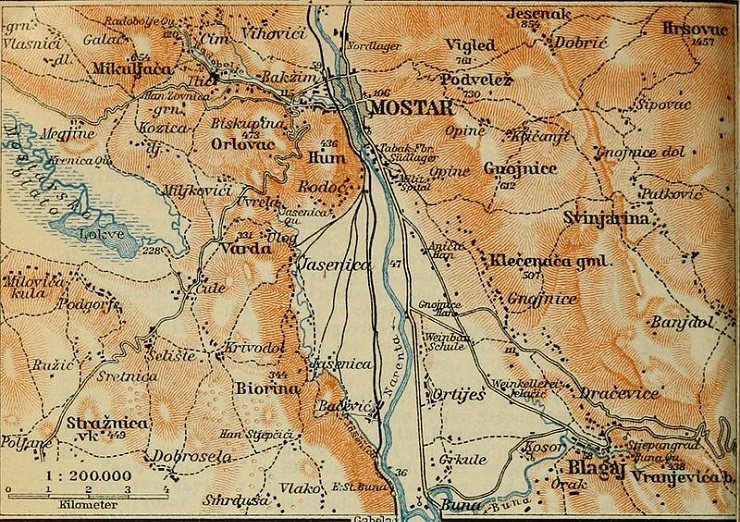 The river that runs through Mostar, in Bosnia Herzegovina, splits the town by religious affiliation. (Baedeker, Karl, 1911)

We had a falafel, then walked over to gray, vacant Israeli watchtower, and took in its melancholy. The Hasbani river gushed directly below us. Along it — a disused gravel path meandered north, to meet with a paved road on which cars buzzed.

“But we can’t have anyone see us from outside the town.” she pointed north, “See the little hill? I think it’s a position.”

I could make out not only the mound she referred to, but a gun’s barrel sticking out from it. “They would love to get hold of us,” she said, “particularly you.”

We ventured north, past the car, past the gym, strolling along the peripheral row of Ghajar’s houses, in hope that it screened us. This neighborhood was indeed newer and more spacious. It was peaceful, pleasant, full of women in colorful headscarves who eyed us with suspicious kindness or kind suspicion.

At one point, along the town’s northernmost rim, I stepped off the street to pick up a souvenir: a stone from the neighboring land. The one I picked was entirely black: basalt. Having chosen it, I raised my eyes and looked through the alley that separated two houses. The loving road was now so near I could almost read the license plates of the passing cars. On a hill beyond the road, the first boxy dwellings of Marjayoun, a proper sized town, scaled a cheerful wintery hill. Blocking part of the view was another mound, another bunker with another barrel. It was time to turn south.

As we did, we passed two men engaged in conversation. It paused as we passed by. One man waved for us to stop then asked, in Hebrew: “Who are you?”

“What?” he said, “and they just let you walk around here?”

“No no!” I quickly calmed him, “We got lost. We are making our way back to Israel. Worry not.”

We waved him farewell and rushed to the clinic and the car, started the engine and zoomed out of town. It was only days later that I realized my ears had betrayed me. He was not reprimanding us. He did not ask us if “they just let you walk around here” sourly, but with hope. He was asking: Is my neighborhood a normal place again, where strangers may simply stroll by?