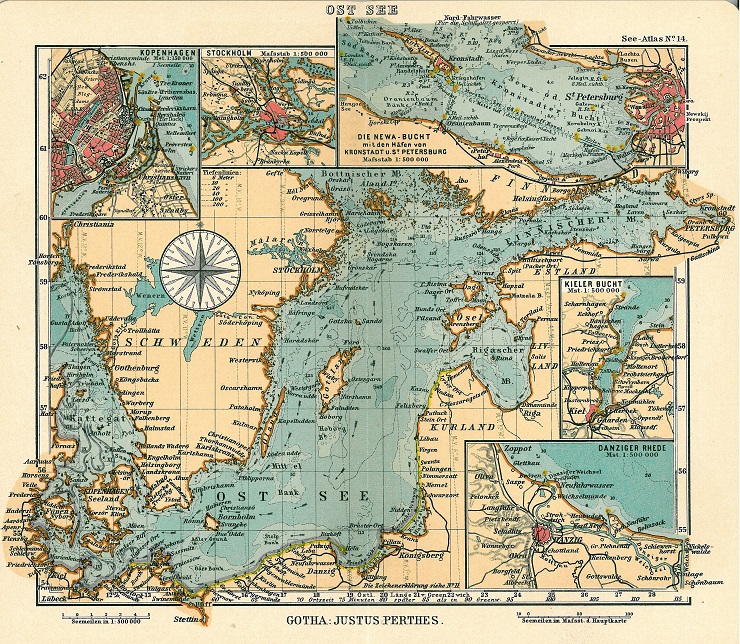 Abraham Ortelius map of Crete and ten other Greek islands, 1584

I made a bit of a headway. When the fog parted below me, the dark desert appeared at an exhilarating depth. Moreover: somewhere not far over my straining head, bits of grass stuck out, signaling the approaching end of the sheer cliff. I kept my eyes fixed on them while struggling up. The promised land of promised rest.

There really was grass up there, and a bit of flat soil. I was far from the fall now, engulfed in sacred silence. I sat down to catch my foggy breath and fell into great calm.

This was not, however, the very crest. The soil kept sloping up from here, grassy and more moderate, but still very steep. How far was it still to the hut? There was no telling, not by looking up. It was all fog-blank up there.

I followed the trail along the cliff’s edge and then up through the silent, stony meadow. It seemed promising, until the fog dispersed briefly, and the great cathedrals of creation appeared. The peaks! They were so dark, so silent, and so, so far above me still. These few steps of silent grass were a topographic prank. I was headed for more cliffs, more pegs and metal ropes, perhaps new waterfalls. How much strength was still in me and how much time before dark?

There was still some cheese in the bag, from the farm near Grindelwald. I sat down for another rest and had some. Yesterday’s heat caused it to sweat all its goodness out. Did I really walk in that heat? Was I really here now, a tiny man on a giant slope?

It was so giant, that slope, so truly deadly. I had to push through. No more rests. I climbed fast, strong and careful, rising out of the grass into a rocks colored yellow and blue by otherworldly moss. The peaks appeared again, tremendous pillars of danger, supreme and broad-chested, like the forbidding chord that ends a particularly pious Bach organ piece, then they disappeared again. The next time the fog let off, I saw the hut: a minuscule human abode, perched on a tooth of rock, still hundreds of meters further up. There was no sky above it.

At the top was snow, not fresh, but certainly decent. By the hut’s door were a few pairs of climbers’ boots and a bin full of ice axes. I took off my New Balance sneakers, now truly in need of replacement.

Inside was warm, but I needed hot: a cup of tea, a shower. The tea came first, served without my asking for it by a smiley woman who stepped out from behind a large steaming pot. She spoke no English, but “shower” is the same in German, and so I soon received that too. 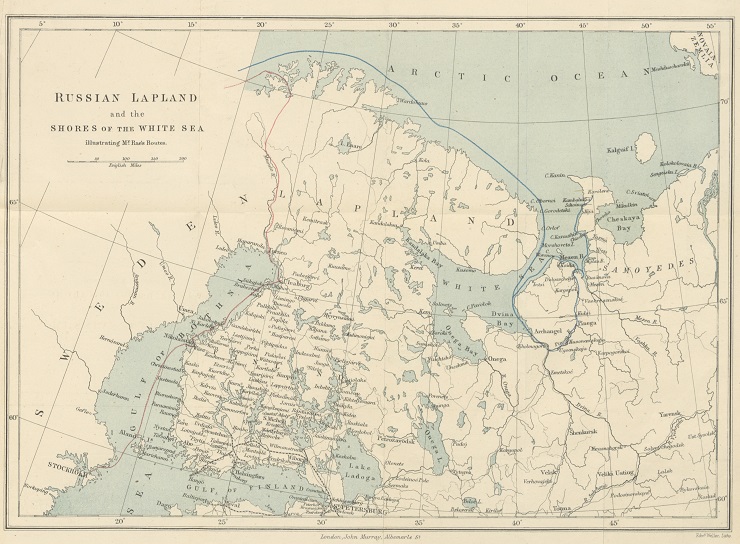 he Land of the North Wind; or, travels among the Laplanders and the Samoyedes, by RAE, Edward

The pot contained carrot soup. While consuming it at dinnertime, I stroked the hut’s resident large poodle and chatted with the owners of the ice axes: three Zurich men out for mountain air. They told me that both carrots, poodle and proprietor were helicoptered here. Food supplies were brought in twice weekly. The lady and her dog arrived early each spring and left by autumn. The hut would remain unlocked during winter, to be used by daredevil skiers.

The Zurichers had spent the day scaling Dussen, a nearby peak that exceeded 3000 meters (the hut was at 2660, so I learned). They complained of the fog in a polite Swiss manner bereft of curses, but theirs was clearly was a shitty day. Outside, black replaced white. I climbed to my bunk in the attic as soon as my bowl became emptied and passed out.

At four I woke, unable to sleep again, and stepped outside. Leaning against the stone railing that kept me safe from the deadly depths. I watched a new foggy day materialize. The climbers headed out for another peak. I remained and waited for the weather to turn. I was unskilled and this was a snowy mountaintop. Climbing down the other side in blindness would be imprudent. The way up had taught me so much.

The fog failed to disperse by lunchtime. Using my best German with the proprietor, Cyrille, I learned that the next hut was 12 hours away on foot. I had no choice but to pay her for one more night, plus an extravagant eight franks for a bottle of boiled water. The water in the tap was molten snow, and the climbers warned me not to consume it.

I went up to the bunk and tried reading in the book I had brought along, a heavy hardcover edition of Sarah Wildman’s “Paper Love,” picked for the road before I knew an Alpine climb was in store. I couldn’t focus, maybe for want of oxygen, went down to the parlor and played a few tunes on the guitar. There was fire in the hearth and the wooden walls were were cozy, but I was falling into gloom. So I put my shoes back on and went out to stare at the fog and think about Lebanon.

But I had no more thoughts about Lebanon, so I thought about Helsinki.

In May, 2006, I went to Helsimki for three days. The Finnish culture ministry invited me to interview two novelists: Arto Paasilinna and Monika Fagerholm, both of them great. Ask your local librarian.

A decade earlier, in my days of rambling Europe, I dated a Finn, a beautiful actress named Ullariikka. We stayed in touch over the decade that passed and made a rendezvous at a cafe downtown. Catching up was joy itself. Ulla seemed well. Her city welcomed a new spring, and the coffee was just great.

Six months later, I was back to the same land, this time as a guest of the Turku Book Fair. I took a train to the capital, and sat with the same ex at the same cafe. I was a wreck.

“It’s been a hard summer,” I tried to explain, “we’re all exhausted.”

How to convey war to a Finn? I myself relied on my imagination. I was not on the ground in Lebanon when the Israeli Air Force bombed ferociously, killing nearly a thousand civilians. Nor did I even venture to the north of my country, where 44 civilians died of rockets fired by Hezbollah. I remained in Tel Aviv. Exposed on one hand to Israeli media, and on the other to my Lebanese friends online.

Most of those friends I met at an online forum dedicated to urbanism and city planning. My favorite was a girl named Nadini, whose avatar showed the smiling face of Kermit the frog. The very virtue of knowing Nadini proved such an anomaly, that I was invited to speak on Israel’s Channel 2. I sat in the studio, prepared to tell of the anguish Nadini expressed when Israel bombed the tarmac of her country’s only international airport, when the interview was abruptly canceled.

Two more rockets fell in the Galilee. My face vanished from the monitor in favor of Nazareth’s skyline. A pillar of smoke rose from what I established to be the exact location of my friend Mimi’s apartment. In fact the rockets hit a nearby house, killing two Palestinian children.

Ulla walked me out into the drizzly streets of Kamppi, her preferred Helsinki nightlife district. There was little she could say.

“I can’t stand my country at time of war,” I confessed. “It’s not only the death toll that gets to me. It’s the numbness. Everybody aligns with the militant positions. The media spits fire. We caused them so much more damage than they did us, so much more death, but nobody would consider restraint, and that includes my dearest friends… Empathy turns nonexistent. It’s like the invasion of the body snatchers.”

We strolled down the city’s elegant central boulevard, with its pretty poplars and poet busts, and passed Cafe Esplanade, where our first date took place a decade earlier. I came to town then as a street musician. Ulla had a summer selling flowers by the railway station. She only sold red roses and I hit on her by bringing her a yellow one. The date went so well. We walked from Cafe Esplanade to a classical concert. By the second movement of Karl Nielsen’s Fifth Symphony, we were holding hands.

What would things have been like had I held on to that hand? I could have stayed on the safe soil of Finland, free from smoldering rooftops. Instead I answered the call of my native land. The five year journey that began on Crete led back to Tel Aviv. It’s all I deserved.

I left Helsinki the following day and sailed to Estonia, then took another ferry, to the Island of Saaremaa. It was a quiet place and I needed peace. Then I went back home.