Achieving genuine conflict resolution requires a dedicated approach that incorporates building trust and relationships between communities from opposing sides of a deeply divided society. Lessons for the Israeli-Palestinian peace process from Northern Ireland. 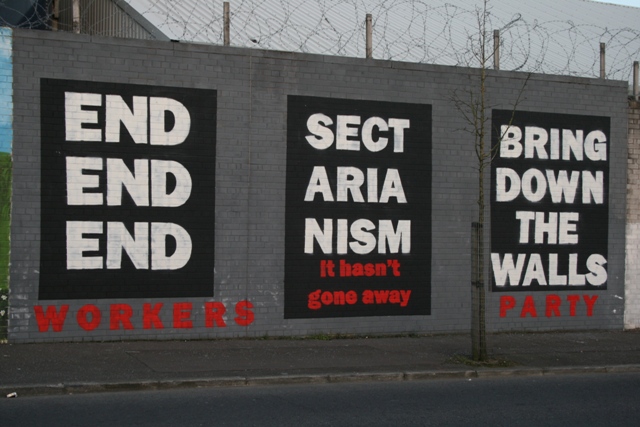 Israeli and Palestinian flags are frequently seen flying in Northern Ireland, often in Loyalist and Republican areas respectively. This is symbolic of how even in a place that is 15 years into its peace process, divisions still exist to the extent that some communities take sides in a different conflict as a continuation of their own.

Be wary when comparing “The Troubles” in Northern Ireland to the situation in Israel/Palestine, especially when it gives opportunity to public figures such as Israeli Ambassador to the United Nations Ron Prosor to disingenuously proclaim a desire to export lessons from the Northern Irish peace process (his loud exclamations that “We [Israel] can learn from Ulster” are just another form of propaganda to sooth the international community).

Building peace allows communities to reconcile differences and hold on to one’s own identity, while respecting the “other’s” opposing identity and ideas for the future.

The existence of defined structures for delivering equal justice is key, which is why a continuous discussion is necessary when it comes to finding a civil pathway to peace (as Haggai Matar noted in his recent piece on Northern Ireland).

Two important points stand out in Haggai’s piece: the first accepting that “no two conflicts are alike,” and the second is the emphasis on realizing that “a solution that fits one conflict could never be copied successfully to anywhere else.”

True peace and reconciliation comes from being valued, respected and dignified. If there is no genuine relationship or respect among the parties involved, then the situation isn’t going to get anywhere and achieving peace remains little more than fantasy.

Thus, in order to reach genuine peace, a set of basic rules and stages is required. A recent article from Quintin Oliver, a man who helped run a non-party ‘YES’ Campaign in the 1998 Referendum on the Good Friday Agreement, illustrates this in his 15 laws of peace processes.

While Oliver’s laws discuss Northern Ireland, I find some points give an inkling as to what may be lacking in Israel today:

1. Citizenship should be clarified and open to all. Those under Israel’s direct control are not afforded the right to citizenship, and therefore to democratic participation and other benefits that come with it. Palestinians and Israelis must be free to make and exercise their own choices with relation to citizenship and national self-determination within either Palestine, Israel or both.

2. Security must be guaranteed for all, without fear or partiality. Achieving a stable situation is desired in order to bring about an end to violence. Confidence among communities can only increase when Israel and Palestine reach a consensus on the primacy of evenhanded application of security, where both parties can be trusted with ensuring a commitment to one another’s safety and rights.

3. Interpretation and implementation of the law must be assured through an independent judiciary. There cannot be room for a politicized application of the law, as this will only deepen the sense of injustice towards those who are being or perceive themselves to be oppressed by structural discrimination.

4. Truth will always vie with justice as we try to understand what happened to us. A robust process of managing and dealing with the past is essential.

5. Armed groups must be subject to full disarmament, disbandment and reintegration. All armed groups must agree to an internationally observed decommissioning, an agreement to lift the siege on Gaza and an Israeli military withdrawal from the West Bank must follow.

6. International and external forces must be eased out of the day-to-day decision-making. Though important in order to kick start the first stages of a peace process, there must be space for standalone interaction. Over-dependence on international actors providing dishonest brokerage has given Israel ample opportunity to continue its occupation, even 20 years after the Oslo Accords were signed.

7. All legal voices must be included, so as to absorb their political views appropriately. A solution cannot simply involve the Palestinian Authority alone. There needs to be inclusivity, and the question one must always ask is whether the voiceless are being heard.

8. Societal infrastructure must be based on equality and sharing, or risk intensifying division. If the Israeli government and some Palestinian groups continue to institutionalize discrimination using the education system, public transport, housing, teacher training, arts and sports, then division will remain in both societies.

9. A free press which would hold the powerful to account without interference is self-evident. The need for a critical and proactive approach within Israel to push creative policy development is obvious. Israeli society seems dominated by nationalist discourse propagated by the government. Furthermore, there is a need for freedom to criticize the Palestinian Authority and Hamas on legitimate issues affecting the areas under their control.

10. Each party to the conflict must be afforded the right to argue for its own vision of the future with impunity. There are still political groups that advocate the destruction of Northern Ireland as an entity, and yet there has been an end to violence, discrimination, checkpoints etc. A strong desire to end conflict on all levels must be expressed by all sides. Israel requires a fundamental societal shift to achieve circumstances in which other visions are given space for peaceful expression. Of course, the advocation of hatred, murder and other crimes must not be ignored.

If civil society demands a peace process that adheres to the above groundrules, we can remain optimistic about achieving peace between Israel and Palestine.

Gary Spedding is a student at Queen’s University in Belfast and a member of his university’s Palestine Solidarity Society and QUB’s students’ union. Follow him on Twitter.