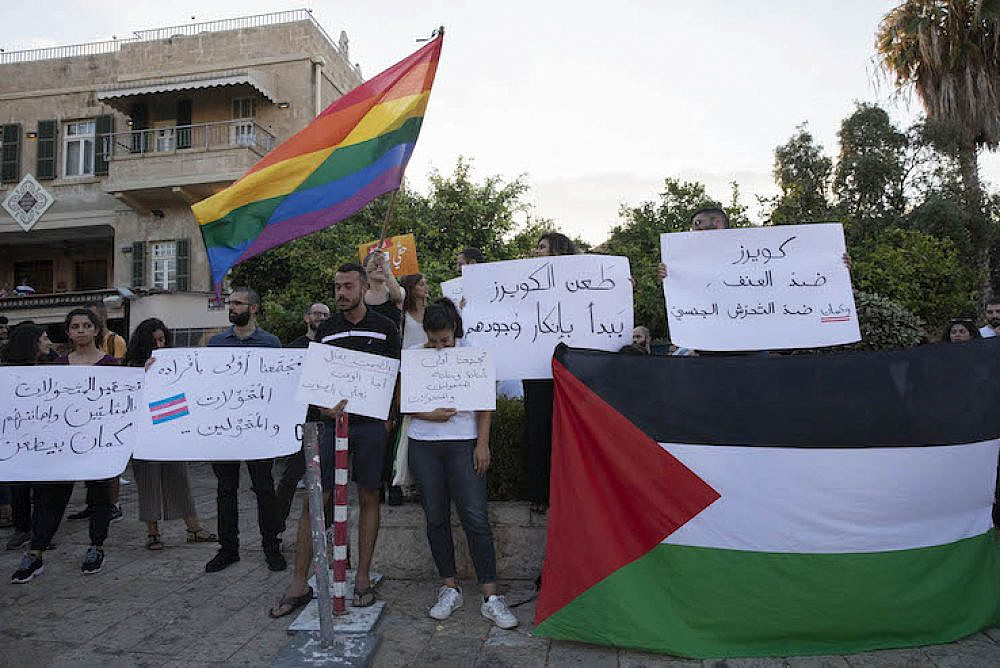 The last year has been transformational — historic, even — for the Palestinian LGBTQ community.

For a long time now, queer Palestinians have been living under two different and overlapping systems of identity erasures. One is by Israelis who have continuously denied our existence as Palestinians, claiming there is “no such thing as the Palestinian people.” The second is by Palestinians who have for the most part denied our existence as homosexuals, bisexuals, transgender, queers, and so on; when one of us stands up and insists on their existence, then we are labeled either as diseased, heretics, a deviation from nature or the products of western influences.

This denial has typically manifested in silence on LGBTQ rights. Furthermore, queer Palestinians were considered unworthy of political representation despite having led the charge for a long time now against pinkwashing, which is, as I argue elsewhere, a national Palestinian issue. For example, when journalists — usually Israeli — would ask MK Jamal Zahalka of the Balad Party about his position on LGBTQ rights, he would say the issue is “simply not on our agenda.” But what was once taboo has now turned into a topic of intense debate in Palestinian society, compelling even the political elites to break their protracted silence and take a stance.

I am neither being hyperbolic nor declaring victory. I am also not suggesting this is the best we can and should strive for. But, as difficult as it is to see at this stage, we are living through a moment of change, or better yet — progress.

In the last year alone, we have found ourselves at the center of multiple discussions that have allowed us to at least begin shedding our forced obscurity. A couple of these events entailed the recent tragic deaths of queer people: the talented gay Palestinian dancer, Ayman Safieh, who lost his life at sea, and whose funeral, featuring dancing and the rainbow flag, enraged some conservatives; and Sarah Hegazi, the Egyptian communist activist who was detained and tortured by Egyptian police after waving the rainbow flag at a Mashrou’ Leila concert in Cairo, who died by suicide after finding sanctuary in Canada. Both of these inspirational individuals became the topic of heated discussions on social media, with friends and allies mourning and celebrating them publicly in the face of conservatives who sought to sully their names.

These tragedies followed several others, like trans activist Maya Haddad who died by suicide a year after surviving an attempted murder, and a gay Palestinian teenager who survived a stabbing by his brother. In August 2019, the first historic Palestinian LGBTQ-led demonstration took place in Haifa, which was also attended by civil society representatives and MK Aida Touma-Sliman — one of the few Palestinian politicians to publicly express support for LGBTQ rights.

Then in July, two other incidents unfolded which seemed to catalyze this shift. Despite their complexity, they highlight the progressive change in attitude toward LGBTQ issues within Palestinian society. 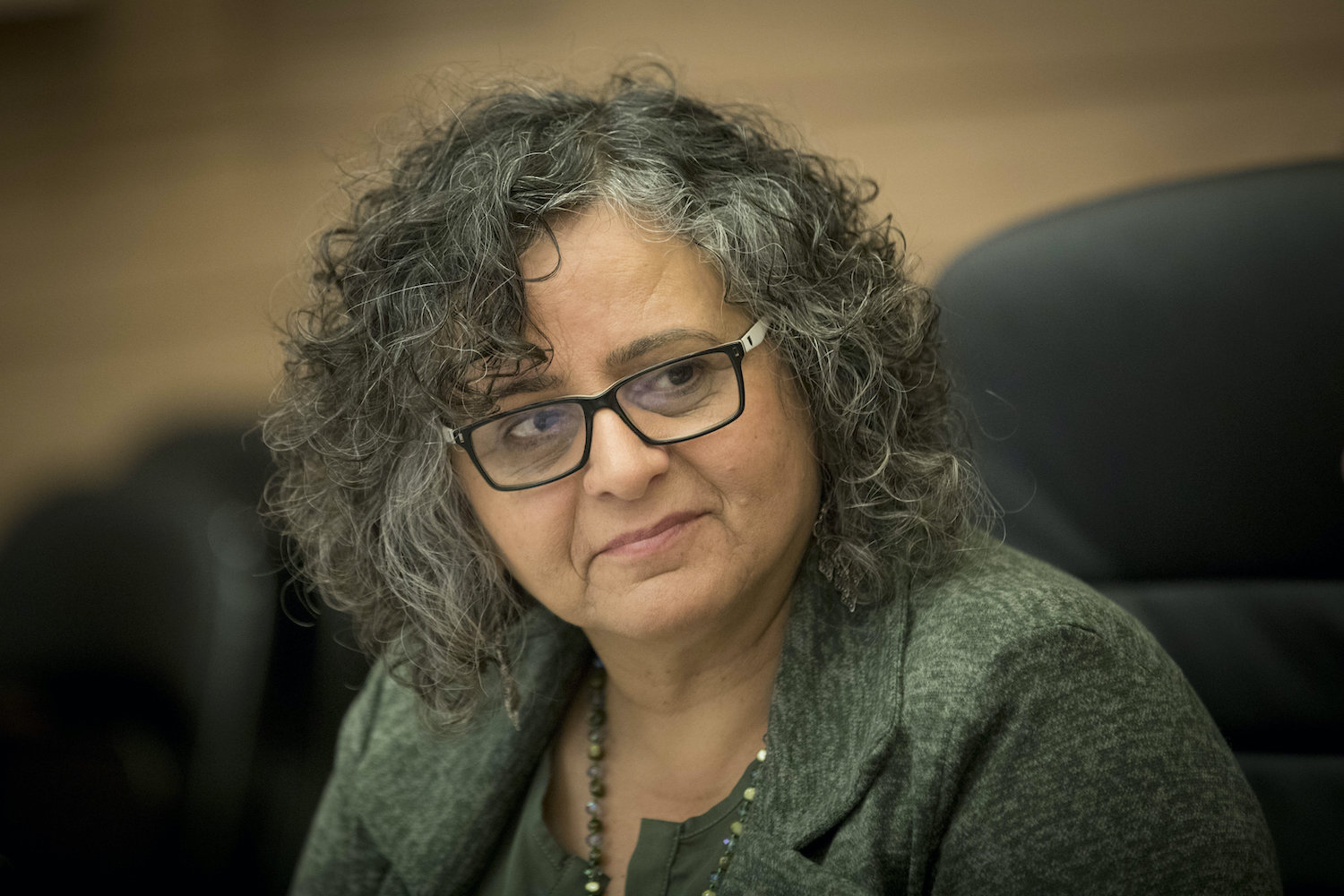 The first involved a modest donation by Julia Zaher, CEO of a local Palestinian tahini company al-Arz, to fund a hotline for Palestinian queers at an Israeli LGBTQ organization. The donation was criticized by some conservative and religious Palestinians, leading several grocery stores to remove the company’s tahini products off their shelves in protest. At the same time, some progressive Palestinians criticized the fact that, rather than support Palestinian LGBTQ groups, the donation was made to an NGO implicated in Israel’s pinkwashing propaganda efforts.

And yet, calls to boycott al-Arz were met with a counter-campaign encouraging people to buy the company’s products, with many social media users changing their profile pictures to the famous al-Arz tahini. Even some Palestinian politicians were pressed to give their two-cents and participate in the ongoing conversation on social media. Ayman Odeh, the head of the Joint List, for example, described the boycott campaign against the company as hypocritical — though he refrained from expressing direct support for the LGBTQ community. Touma-Sliman was the only Palestinian parliamentarian to openly back Zaher and speak about the need to accept difference.

And then came the Knesset bill seeking to criminalize “conversion therapy,” which deepened divisions among members of the Palestinian-led Joint List. Three voted in favor of the bill (MK Touma-Sliman, MK Odeh, and MK Ofer Cassif from the Palestinian-Jewish al-Jabha/Hadash Party), three voted against (MK Said al-Harumi, MK Walid Taha, and MK Mansour Abbas from the United Arab List Party, the political wing of the southern branch of the Islamic Movement). The rest were absent from the vote, which was especially disappointing and seen as hypocritical given their human rights discourse, as well as the emphasis on secular and universal values in their political platforms, academic scholarship and grassroots activism.

This was not the first bill seeking to promote LGBTQ rights to be brought before the Knesset, and historically some members of these parties have voted in favor of this type of legislation, such as the bill to institutionalize civil marriage back in 2018 that would have allowed for same sex marriages. While this law did not provoke much discussion among Palestinians, several Joint List MKs voted favorably. 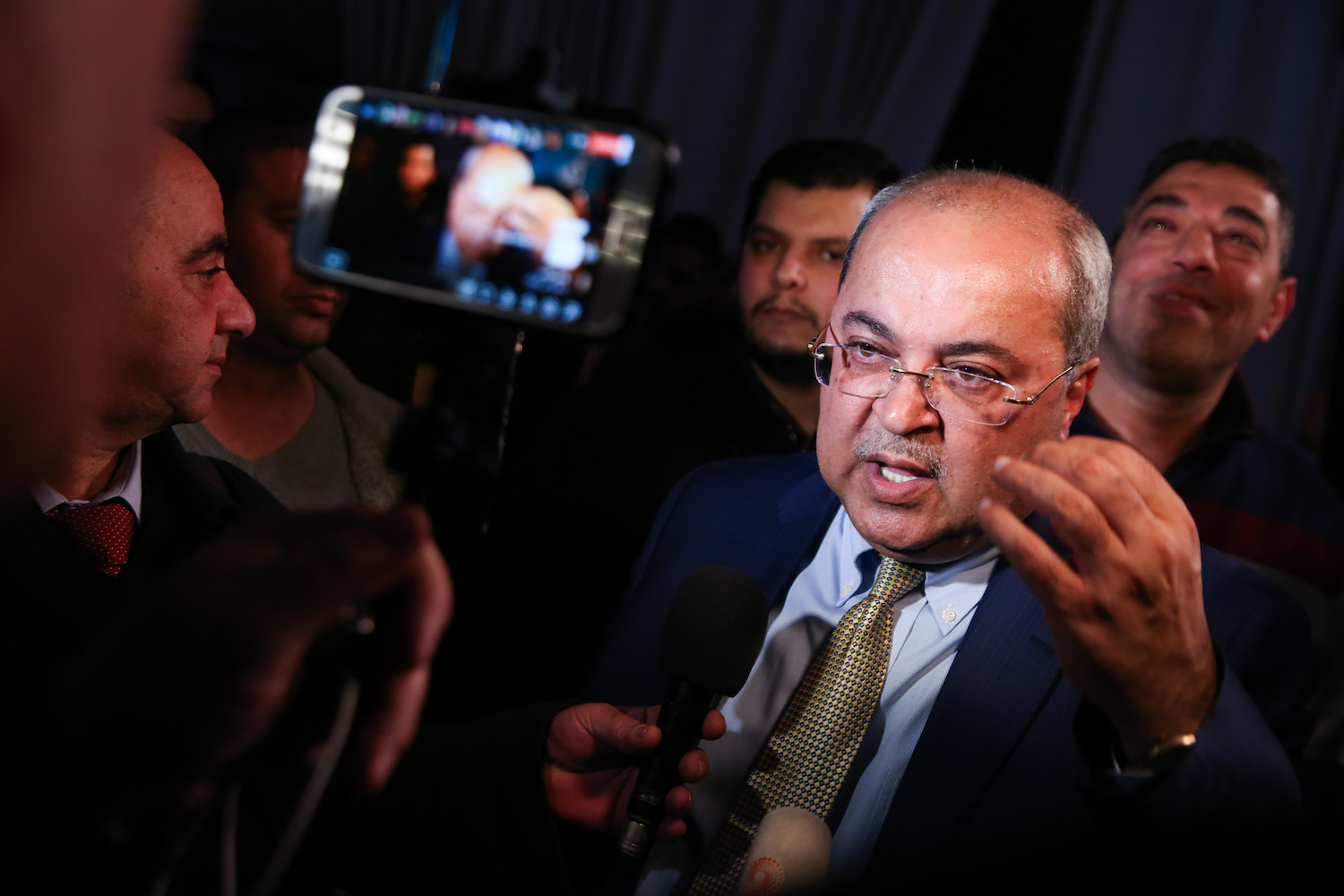 Aswat, the Palestinian Feminist Center for Sexual and Gender Freedoms, issued a statement, in which it reiterated its position against the so-called conversion therapy practice, describing it as a form of violence and torture targeting LGBTQ bodies, referencing both the Lebanese Psychiatric Society 2013 statement on the issue as well as the American Psychiatric Association’s 1973 decision to remove homosexuality from the DSM. Additionally, the organization called on the Joint List to state publicly and clearly its support for the bill, to protect the human rights and freedoms of all, and put an end to violent and harmful practices against “those with diverse sexual and gender-related experiences.” The same statement was shared by alQaws for Sexual and Gender Diversity in Palestinian Society on their Facebook Page.

The Arab Psychiatric Association also issued a statement elaborating on its professional position concerning the bill: “The Arab Psychiatric Association sees that the diversity in sexual and gender identities has become a social and psychological fact… all while the psychological literature clearly shows the failure of the so-called ‘conversion therapy’ and its negative destructive effects on the psychological and physical health of the individual,” they wrote. “Freedom equates to the responsibility toward the self and the protection of the authenticity of being, and stands in contradiction to imposition, torture and infringements on human dignity. Therefore, the act of therapy cannot employ symbolic and mental violence by imposing certain identities and lifestyles on individuals and groups,” the statement continued.

The bill became the subject of conversation also in local Palestinian media, with journalists questioning many MKs on the issue — an exceptional breakthrough. For example, on July 23, journalists Sanaa’ Hamoud and Mohammad Majadleh interviewed MK Ahmad Tibi of the Ta’al Party on Nas Radio, a Nazareth-based Palestinian radio station, and asked why he and his party were absent from the vote. Tibi’s answers were disappointing. He made clear that this law was merely about professional psychological standards and not about the legitimacy of homosexuality, stressing that, while he accepts the medical logic of the bill, his party does not support revoking the license of a therapist for performing conversion therapy, nor would it support homosexuality.

MK Mtanes Shehadeh of Balad was also interviewed on the same show. His party has traditionally identified with a secular agenda and strong human rights principles informed by international law standards. When asked why his party was absent from the vote on the bill, Shehadeh explained that the discussions unfolding in Palestinian society mirror the debates happening within Balad. “We have always said in the Joint List that the essential and basic issues that we go to the Knesset to address and to struggle for are the status of Palestinian society, discrimination, the Palestinian cause,” he continued, but LGBTQ rights are not “an essential political issue. We don’t politicize it.” The journalist then asked Shehadeh whether the decision to abstain from the vote is in itself a position, and whether this goes against their platform, to which Shehadeh said that the appropriate place for this kind of conversation should be within institutions like the High Follow-Up Committee, an umbrella organization that represents Israel’s Palestinian citizens. MK Mtanes Shehadeh who heads Balad, one of the parties that make up the Joint List, speaks at an election campaign event in Tel Aviv, August 20, 2019. (Gili Yaari/Flash90)

Shehadeh was harshly criticized for his comments, eventually leading him to publish a statement on Facebook admitting he had “made the wrong assessment” — though he still steered away from committing to defending LGBTQ rights. For Shehadeh, the issue is less about LGBTQ rights and more about how the four parties that form the Joint List should engage on contentious issues.

Many Palestinians commented on Shehadeh’s post, calling his apology cowardly, evasive, and problematic for failing to take a clear stance on an intrinsically human rights issue. But he wasn’t the only Palestinian parliamentarian who was caught unprepared — this ordeal has deeply embarrassed Palestinian parties. All of a sudden, progressive grassroots voices are loud enough to unapologetically challenge politicians on this issue.

This is no small feat. The back-and-forth on LGBTQ rights taking place within Palestinian society, and between voters and their representatives, is creating the kind of movement that is bound to bear fruit.

Several developments have made this transformational and historic moment possible, not the least of which is the unyielding and stubborn work of Palestinian LGBTQ organizations, such as al-Qaws and Aswat, and independent activists who have shown up and confronted the conservative forces who seek to deny our existence and legitimacy. These efforts have also been greatly aided by the ubiquity of social media, not only for bringing together those who would not have otherwise met, but also — and more importantly — for disrupting the political elites’ monopoly on certain types of speech and on access to politics-making, which had historically screened out subaltern and marginalized voices and rendered impossible their chances of being heard.

This, of course, does not mean that the issue of LGBTQ rights has been settled within Palestinian society. Our path toward acceptance is still full of challenges, and the struggle for equality is far from being won. But this recent episode, accompanied by others from recent years, marks a qualitative change that signals a paradigm shift in how we have been operating. Queer Palestinians are no longer taboo or “simply not on the agenda.” 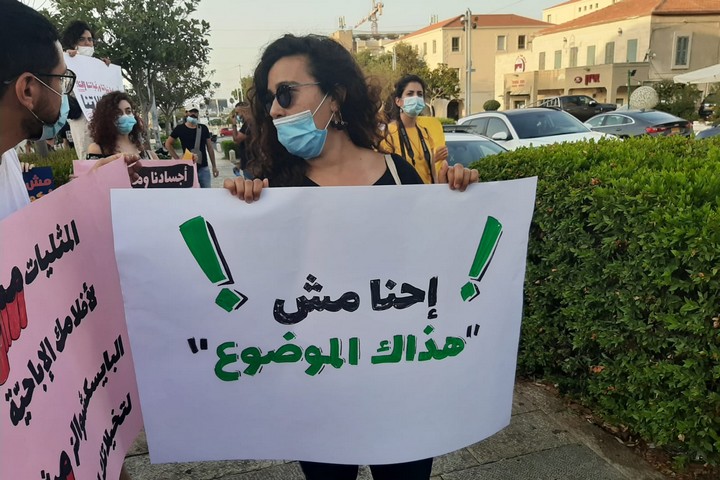 For those who live in countries that have made some strides on LGBTQ rights, it may seem odd to speak of this moment in terms of progress. But any successful struggle toward recognition and acceptance begins with breaking the silence about us and forcing society to address our existence. And while a lot of what we are hearing and seeing now is pushback from conservative forces, this means the needle has moved far enough on this issue to warrant such a robust response.

The Palestinian LGBTQ community and its allies are speaking out and holding both the Palestinian society and its political establishment accountable. “A queer cry for liberty” was what queer activists and their allies chanted at the latest demonstration in late July. They were animated by rage, grief, disappointment and frustration, yet motivated by hope and the strong belief in our capacity to achieve change. As I see it, this slogan, and the emotions it represents, perfectly encapsulate this transformative moment.