The occupying identity has become second nature — a state of being. Recognizing the Nakba and Palestinian right of return would go a long way toward liberation — of Israelis. 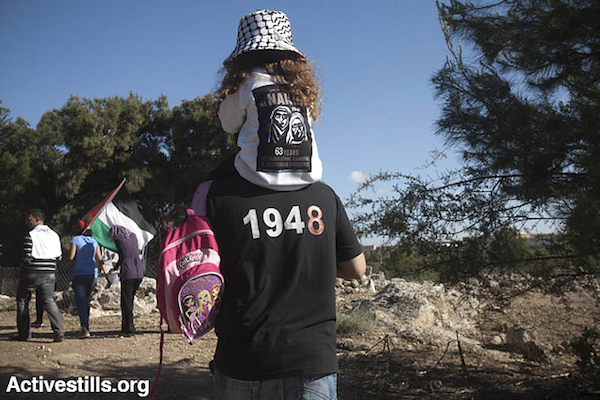 On the 67th Independence Day of the State of Israel, its citizens appear to be further than ever from the “liberation” promised on the day of its founding. A war that was intended to “liberate” us (‘us’ being Jews alone, of course) in 1948 ended in military occupation and the expulsion of most of the Palestinians from the country. Even more severe than that, the occupation turned the Israeli-Jewish collective identity into an occupier’s one, which since then has been, in its great majority, committed to continuing the enterprise of occupation.

The vast majority of Israelis do not question the sacrifice of their sons and daughters in this ongoing war, let alone that they are being turned into Spartan subjects whose goal is to kill the opponent in the name of the holy nation. There is a small but growing number alongside them who are taking civic responsibility and refusing to serve in the Israeli army.

The successful implementation of the occupying identity is reflected in the concealment of the occupation itself. Most of those in the peace camp and the Israeli left refer to the occupation as an undertaking that began in 1967. They have also succeeded in bestowing on the world the derogatory term “settlers,” thereby creating the illusion that the occupation of the West Bank and Gaza, and the continuing military control over them, are an anomaly or deviation from a supposedly pure original path.

The fact is that the occupation of 1967 is the obvious culmination of an enterprise that began in the dawning days of Zionist immigration. The segregation between settlers and natives in the name of “redeeming the land” was a guiding principle that reached its ultimate form in the establishment of a Jewish state, by way of expelling most of the Palestinians and turning them into refugees during the Nakba. 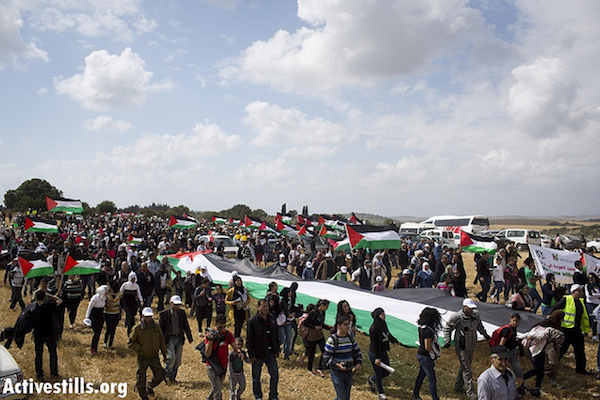 Approximately 10,000 people take part in the annual ‘March of Return’ to the demolished Palestinian village of Khubayza in northern Israel. Although Nakba Day is commemorated on May 15, the ‘March of Return’ occurs on the same day Israel celebrates its Independence Day, according to the Hebrew calendar. April 16, 2013. (Photo by Oren Ziv/Activestills.org)

That the ministers of education and culture define the Nakba as a day on which Palestinians mourn the founding of the State of Israel not only displays ignorance, it also bolsters Israelis’ sense that Palestinian identity is limited to hatred of Israel and Jews.

The first Zionist leaders in Europe used the term colonialism in order to describe what it was they wished to bring about in Eretz Israel. Colonization continues to this day in the limited but consistent expulsion of Palestinians, the intention to pass a nation-state law, the marginalization of the Arabic language and more. The time has come for a new word in Hebrew, to signify the process of de-colonization that can release us from our identity and reality of occupation. De-colonization must challenge the very origins of Israel and not just seek to address the later symptom of those roots – the occupation of 1967.

The occupying identity has become second nature — a state of being — to Israelis, to the point that any proposal in the direction of peace, which of course requires compromise with the occupied, is presented as an existential threat whose goal is the total destruction of Israel (which alludes to the ultimate destruction that occurred in Europe, without the need to reference it directly). Therefore, Israel’s nationalist right-wing leaders gave up long ago on such threatening talk of peace. Spaces for shared thoughts of the future that will come once the colonialist regime has fallen, have become extremely rare.

Many Israelis view the recognition of Palestinians’ rights, and the idea that they are equal as human beings to Israelis, as expressions of anti-Semitism and self-hatred to the point of posing a genuine existential threat.

On the contrary, we believe that recognition of the Nakba and the right of return for Palestinian refugees present an opportunity for Israelis to be truly free to live in prosperity and security in the long-term, and not just in the gaps between wars.