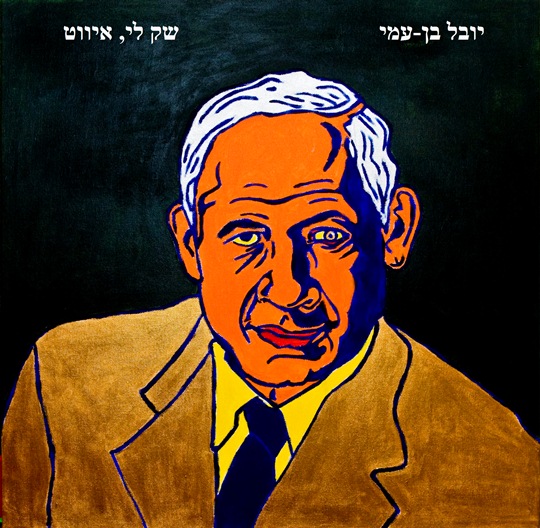 I’d be very surprised if any of you recall a post I published here last December. I was showing off my version of an Irish protest song from the 1980. The original refrain, penned by Irish songsmith John Maguire runs as such: “Hey Ronnie Reagan / I’m black and I’m pagan / I’m gay and I’m left and I’m free.” My girlfriend Ruthie and I applied the tune to a local politician, our staunchly anti-democratic, openly racist Foreign Minister Avigdor “Ivet” Lieberman, and were stunned to see it go viral on YouTube.

Since then, another protest tune recorded in our living room made waves. I put a particularly crass Facebook remark, addressed to “all leftists,” to music. Sung to a happy tune, its wishes of seeing us all raped by Palestinians, Sudanese refugees and elephants turned into a commentary on the common discourse in this country. The song has been viewed on YouTube 26,525 times so far.

Then the new elections were called, and Netanyahu and Lieberman merged their parties to form a right-wing bloc. Finally it seemed inevitable: an album had to be produced, and it had to be titled after its original hit tune: “Shak li, Ivet” – “Kiss My (Arse), Lieberman.”

The album was a bit of an experimental feat, since no such work has ever been produced here. Much greater talents then I have recorded Israeli protest songs, from Hava Alberstein to the Biluyim. The latter came closest to dedicating an entire album solely to the murky realities of Israeli politics and the occupation, but “Kiss My (Arse), Lieberman” demands to go a step further. Speaking on IDF Radio on Tuesday, critic Guy Tene was generous enough to credit it as being such an achievement. “It will undoubtedly prove a stepping stone in the history of Israeli music, “he said, adding that the album “is an unprecedented phenomenon in the Israeli discourse.” I was naturally thrilled.

The budget for the project was zero shekels. All musicians participated pro bono, as did Hadas Reshef who painted the iconic cover, and producer Yaron Fishman. Although the album features many translations, nearly all of the album’s tunes are sung in Hebrew. Only one, a cover of Bob Marley’s “Redemption Songs,” is performed in English alongside the brilliant Jerusalemite singer Shira Z. Carmel and J14 activist Stav Shaffir.

I am sharing the link here, in hope that those who do speak Hebrew or have Hebrew-speaking friends or contacts will enjoy this. Please send it to them as a gift in support of those voices here that promote peace and justice, human rights and democracy.

Hebrew or not, the album owes a lot to the English language protest song tradition. Besides the title song and its Irish roots, it features three other translations from English. My adaptation of Sinead O’Connor’s “Black Boys on Mopeds” (Track #10) refers to Palestinian children killed by Israeli forces, such as the late Abir Aramin. Ewan Maccol’s “The Moving on Song,” originally concerned with the fate of migrant workers and tinkers in the British Isles, is here dedicated to migrants workers and African refugees, who are regularly mistreated by our authorities (track #6). “In The Neighborhood” by Tom Waits opens the album. Strangely, when translated, it gives a precise image of a Jaffa neighborhood where I lived for three years. Lovers of French chansons will doubtlessly recognize Jacques Brel’s “Mon enfance,” (Track #9) sung by a campfire on an artists’ pilgrimage to Jerusalem last summer.

The third track, “Beautiful Corpse,” comes from a particularly interesting source: its author is Harel Segal, a strongly right-leaning journalist. Harel may hold the opposite view to my own on nearly all things, but his yarmulke, unlike those of many others, is meaningful. He is a spiritual man who is truly critical of materialism and the lack of values in contemporary Israeli society. I am grateful to Harel and to his fantastic band Naj Hammadi for supporting my cover of it (Naj’s guitar player, Or Heller, contributed to many of the recordings).

Words tend to chase music away, so I’ll hold my tongue from now on. Please enjoy and please share. This land needs protest songs, but more so it needs for people to listen to them and become motivated. Give it an audience – all those who were involved in making this album a reality will be grateful for it.