A recent surge in hate crimes against Palestinians in the West Bank has drawn the attention of both local and international media. But the violence is just one part of the settlement system that is pushing Palestinians to abandon their land. 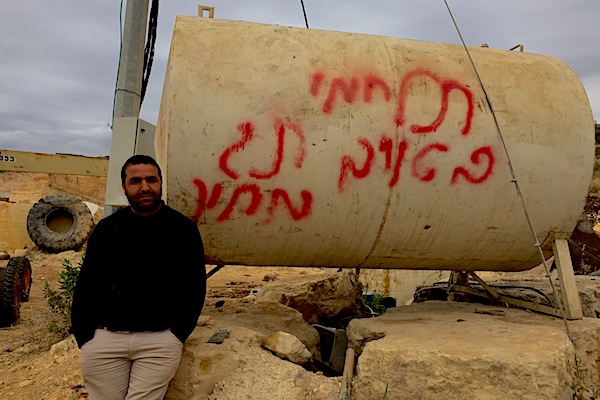 Jafar, who works in Urif’s quarry, stands next to a container that was graffitied by settler youth during a recent spate of hate crimes in the village. The graffiti reads: ‘Fight your enemy. Price tag.’ (Edo Konrad)

In the hills of the northern West Bank, nightfall brings back an old fear. For the past two months, Palestinians living in a group of villages near Nablus have woken up to slashed tires, burned out cars, a mosque set ablaze, and racist graffiti scrawled on their property.

The hate crimes, once commonly referred to as “price tag attacks,” are committed by extremist Jewish youth from nearby settlements. Their goal is retributive: to exact a price from Palestinian civilians (and in some cases left-wing Israeli Jews, Christians, and Israeli security forces) for actions Israeli authorities take against the settlers, usually building enforcement in illegally built settlements.

The attacks are sporadic and difficult to combat in real time. The extremists, faces covered, slip into the villages — often times located adjacent to their settlements or outposts — undetected.

In the village of Aqraba, the Sheikh Saadeh Mosque was set on fire before the assailants graffitied the words “price tag” and “revenge” on its walls.

In Urif, extremists spray painted “Death to Arabs” on shipping containers belonging to a local resident and the local quarry was tagged with the words “Fight the enemy.”

In Nabi Saleh, residents woke up to find that settlers had spray-painted “There is no room in the Land of Israel for the Tamimi family,” referring to the Palestinian family whose daughter, Ahed, became a global icon after she was videotaped slapping an Israeli soldier.

“The settler violence does not stop,” says Jafar, a Hebronite who has worked in Urif’s quarry for the past 15 years, as he points to the outposts of Yitzhar, one of the most notoriously radical settlements in the Nablus region, which have metastasized across the Salman al-Parsi mountain range that overlooks the village.

Walking through the valley, it’s clear just how easy and quickly the settlers can clamber down to the village. In an effort to deter such attacks, the quarry workers installed a camera that faces Yitzhar on a utility pole.

“Three years ago, the settlers set fire to one of our excavators,” Jafar continues, “and a month ago, they had laid spikes on the road,” he says, gesturing with his chin toward the sandy road that leads from to the quarry from the houses on the edge of the village.

According to the Shin Bet, there have been a total of 16 price tag attacks in the first four months of 2018 — twice as many as there were in all of 2017. Due to under-reporting to Israeli police, however, the real number is likely even higher.

“I don’t call the police when this kind of thing happens,” Jafar says. “I have gotten used to the violence. There are plenty of rocks here for them to spray paint. As long as they don’t harm me, I am fine.”

The spectacle of settler violence

Palestinian farmers from the West Bank village of Qaryut assess the damage done to their olive trees the day before by Israeli settlers, October 20, 2013. (photo: Ryan Rodrick Beiler/Activestills.org)

Jafar is not alone. According to Israeli human rights organization Yesh Din, between 2013 and 2015, over 30 percent of victims of settler violence said they were unwilling to go to the police. The reasons vary. Most victims say they mistrust the authorities, while others are concerned about exposing them or their families to more violence. Others are simply ideologically opposed to engaging with Israeli authorities for any reason.

Palestinians often feel that the police do very little to stop settler violence, which runs the gamut from physical assault, arson, cutting or burning down olive trees, stone throwing at random Palestinian cars, and property damage. Their suspicions are not unfounded.

Those figures do not take into account the hurdles Palestinians face when attempting to file a complaint, which often include needing an army permit just to enter the areas where Israeli police stations are located.

Price tag attacks have understandably become a spectacle since they began in the early 2000s. The burned out churches, racist graffiti, and charred vehicles have both a material as well as a psychological effect. Beyond the damage to property, the attacks are intended to frighten the local population — to let them know that they are always being watched, that the violence they encounter in the fields can, at any time, come home. 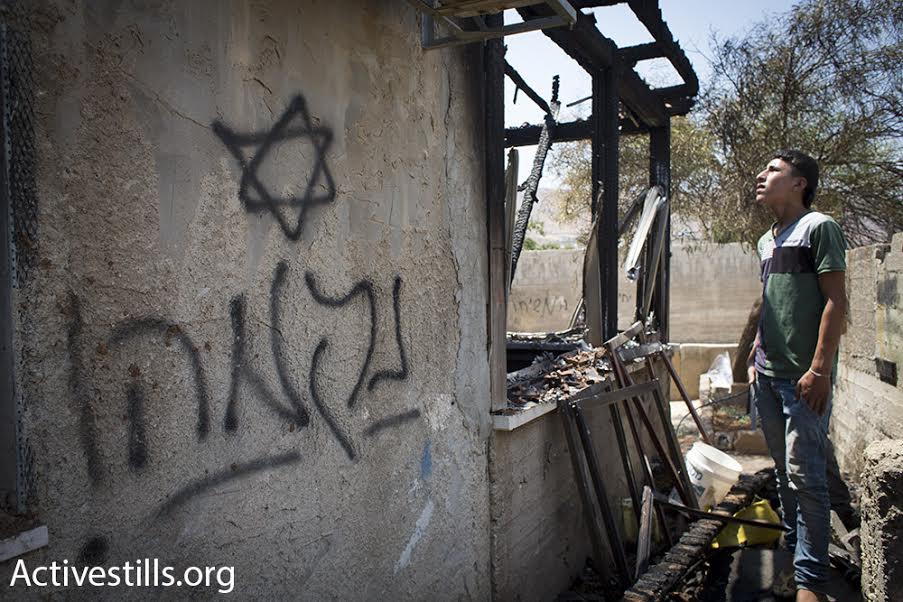 The word ‘revenge’ is seen spray-painted on the wall of the Dawabshe house, Duma, West Bank, July 31, 2015. (photo: Oren Ziv/Activestills.org)

They can also escalate into outright terrorism. In July 2015, settlers threw Molotov cocktails into the Dawabshe family home in the West Bank village of Duma, spray-painting the word “revenge” on the house’s outer walls. The attack took the lives of the mother, father, and one-year old Ali. Only five-year-old Ahmad survived.

Yet these kinds of high-profile attacks tend to overshadow the more mundane, daily violence Palestinians face at the hands of settlers, often buttressed by the Israeli army, which rarely goes reported in the press.

“Price tag attacks are merely a blip,” says Yesh Din Spokesperson Gilad Grossman. “The violence that farmers encounter in this area is a daily occurrence, and its purpose is to slowly drive Palestinians off of their land so that settlers can take over.”

“This process is constant,” Grossman continues, “and its effect on Palestinians is far more disastrous than price tag attacks.”

At the western most edge of Urif, just over the hill from one of Yitzhar’s outposts, stands Munir’s home. Munir, a portly, elderly man, has walked with a limp ever since he was attacked by settlers last March. A week after three settlers burned three of his vehicles, over 70 settlers returned, opened fire at his children who were playing outside, and threw stones at his home.

After being hit by a stone, Munir was caught by the settlers who beat him with a metal rod, breaking his leg. He filed a complaint with the police, yet nothing has come of it.

“The violence began in 2006, when Yitzhar’s outposts began to spread across the hill,” he says. “The soldiers do nothing to stop it. In fact, often times they just stand by as settlers throw stones and burn our property.” Munir’s land is still littered with tear gas and stun grenade canisters fired by Israeli soldiers at Palestinian youth who arrived at the scene, stones in hand, in an attempt to repel the settlers.

Earlier this year, Israeli soldiers killed a Palestinian man from Urif after settlers came down the hill from Yitzhar and clashes broke out. 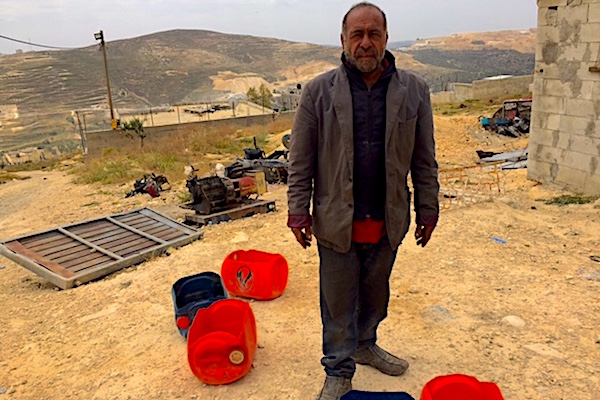 Munir, who lives on the outskirts of the West Bank village Urif, has been repeatedly attacked by Israeli settlers from the nearby settlement outposts. (Edo Konrad)

Yet the effect of settler violence — bolstered by both IDF and police inaction — cannot be minimized to a few Palestinians living on the outskirts of villages, vulnerable to attack by extremists laying in wait. In some cases, the violence is so relentless that the effect on entire communities can be cataclysmic.

Just a 15 minute drive from Urif, the small village of Jalud has seen its population drop by hundreds of residents. Built atop undated, ancient ruins, the village is encircled by six outposts: Ahiye, Adei Ad, Esh Kodesh, Hadaat, Kida, and Shvut Rachel, which have stolen nearly one-fifth of its agricultural land. Facing dire unemployment, many of the villagers have left to cities in the West Bank, and in some cases even to the United States, says Abdullah Haj Muhammad, the head of the local council. Those who leave typically do not return. 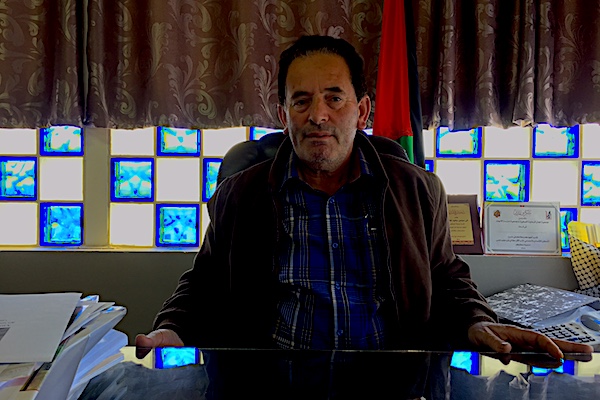 Abdullah Haj Muhammad, the head of Jalud’s local council. ‘We want to strengthen our village by opening up local businesses. But it may not be enough.’ (Edo Konrad)

Like dozens of other villages, Jalud was also hit by a price tag attack on April 25, in which settlers spray-painted the words “Let us take care of them” on a wall in the village. But the violence started long before. “We have never had good relations with the settlers,” says Muhammad, “but before the beginning of the Second Intifada in 2000, there was quiet.” That quiet was interrupted as outposts such as Esh Kodesh, notorious for its violence against Palestinian farmers, began choking off Jalud from its land, turning it into their own private vineyards and olive tree groves. Meanwhile, the village has seen its trees burned down and its cars set on fire.

“People are growing desperate,” Muhammad says from behind his large, wooden desk, his office walls covered in a collage of photos showing the aftermath of settler violence against his constituents, presumably to show visitors. “We want to strengthen our village by opening up local businesses. But it may not be enough, people keep leaving.”