In honor of Valentine’s Day, three tales from Gaza of the impossible conditions for families and couples created by Israel’s closure of the Strip. 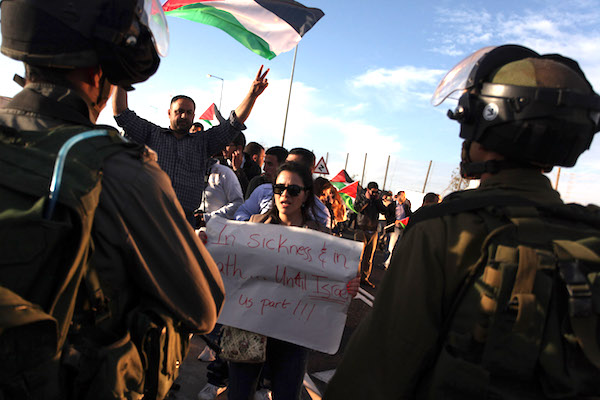 Israeli soldiers prevent the progress of a symbolic wedding party towards the separation wall near Hizme checkpoint in the occupied West Bank, March 9, 2013. (Issam Rimawi/Flash90)

To receive a permit to travel to and from Gaza via Erez Crossing, Israel must determine that your reason for travel is humanitarian in nature or that you meet a list of exceptional circumstances (like playing for the national football team or being a trader). Traveling to visit your mother you haven’t seen in 10 years isn’t considered to be humanitarian in nature, unless, God forbid, she’s ill with a fatal condition.

Traveling for the purpose of attending a wedding is possible, but only if the groom or bride is a first-degree relative. Traveling to your own wedding doesn’t count. Gaza, like all other places in the world, is full of people who love. Here are three stories from the Strip, not just of romantic love, but of all kinds of love under closure. The stories stand out for how ordinary they are, on the one hand, and how extraordinary the circumstances are in which they take place.

Shadi and Aya were married in the Gaza Strip just before the devastating military operation Protective Edge in the summer of 2014. Aya, an American citizen and newly pregnant, was evacuated from the Strip mere days after the operation ended, along with hundreds of other Palestinians holding foreign nationality. She thought it would be a matter of a few short months before Shadi joined her in the United States.

After getting all his paperwork together, Shadi submitted a request to travel to a U.S. immigration visa interview at the U.S. Consulate in Jerusalem. The consulate serves Palestinian residents of the occupied Palestinian territories. As part of standard screening procedures, visa applicants must attend an in-person interview in Jerusalem. Residents of the West Bank and Gaza require permits from the Israeli military to attend these interviews; for residents of Gaza it’s much harder and rarer for them to receive the permits due to the closure of the Strip.

From December 2014 to April 2016, Shadi missed three appointments at the consulate either because the Israeli authorities didn’t respond on time or didn’t respond at all to his application permits. Each time he missed an appointment, he’d schedule another one, submit a new application and start the waiting process all over again. 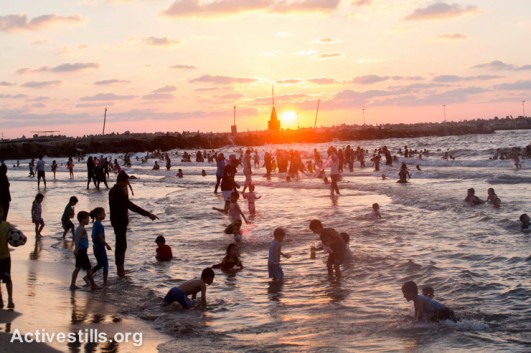 Palestinians gather at the beach at sunset in Al Meena, Gaza City, September 12, 2014. After seven weeks of Israeli offensive, during which most Palestinians were confined to their homes, many Palestinians went to the beach to enjoy some open space.

The fourth time, even though some of the previous requests had been answered favorably and he simply couldn’t travel because he had missed his appointment, in June 2016, he was told he had been denied exit for “security reasons.” Neither Shadi nor his legal representation at Israeli human rights organization Gisha know what “security reasons” make him ineligible to visit the U.S. Consulate, nor why it took so long for these security concerns to be raised given he had been approved for previous permits. Gisha filed a court petition to try to find out; a hearing was set for today, Valentine’s Day.

In the meantime, Aya gave birth to their son, Ahmed, a beautiful, healthy boy who has yet to meet his dad. This Valentine’s Day marks more than two years that the couple are apart.

A groom at the border checkpoint

Mohammed’s father is an Israeli citizen, so Mohammed was entitled to Israeli citizenship from birth. Anhar, a Palestinian resident of Gaza, only holds Palestinian residence. Several years ago, Mohammed chose to make his life in Israel; as a young man starting out, he figured his financial prospects would be better there. He kissed his mother goodbye and promised to visit — a common scene around the world.

Uncommon, however, is the fact that both Anhar and Mohammed would have to request permission from the Israeli authorities to visit one another, proving that their reason for doing so is humanitarian enough to warrant that permission, even though they live just a short drive away from one another. The wedding of a first-degree relative is just such a humanitarian reason, according to Israel’s criteria for travel of people through Erez.

Mohammed met and fell in love with his bride-to-be a few years after arriving in Israel and they decided to get married. Anhar wasn’t able to enter Israel for the sake of meeting her future daughter-in-law, nor to attend the engagement party. But she was eligible to attend the wedding itself, nothing more. Anhar needed assistance with the process of requesting a permit, pushing to get an answer on time so she’d make it to the wedding, and then when she got held up at Erez Crossing the day before the wedding so that the authorities would let the poor woman through. 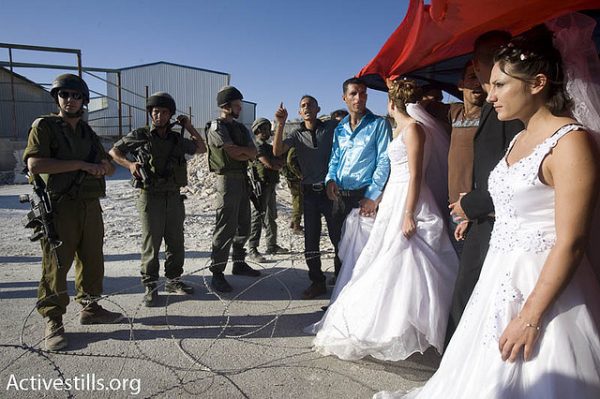 At 6pm, when the crossing had officially closed for exit, Mohammed sat in the parking lot waiting for his mother, while his bride and all their guests were waiting for him back in their hometown at the henna party (which takes place the evening prior to the wedding). Finally, Anhar emerged and the two were united for a brief few days of celebration and happiness.

Ignoring the facts of life

Mr. and Mrs. H. were married in Gaza in 2010. They both dreamed of having children and were looking forward to raising a family together. For several years, the couple tried unsuccessfully to get pregnant. They began fertility treatments, first in Gaza and then in the West Bank. The couple, who luckily had the means to afford it, were determined to keep trying and decided to try to take advantage of advanced treatments only available in the United States. But to get to the U.S. they would need visas, and to get visas, the two of them would need to first travel to the U.S. Consulate in Jerusalem for visa interviews.

They applied for permits via the Palestinian Civil Affairs Committee, while Gisha appealed to the Israeli authorities on their behalf, citing their determination to fulfill the most basic right of trying to have biological children of their own. A week later, the army responded that only the request of Mrs. H had been approved. The following day Gisha appealed, to the effect that when it comes to making children, if the army wasn’t aware, it takes two to tango. A few days later, the army caved and approved the request of Mr. H as well. The couple traveled to Jerusalem and their visa requests were approved — the first step to fulfilling their wish for a family.

Tania Hary is the executive director of Gisha – Legal Center for Freedom of Movement. A version of this post was originally published on Gisha’s blog, and is reprinted here with permission.