Nearly 1,000 African asylum seekers walked out of Israel’s ‘open’ detention facility last week, saying they were headed to a strip of UN-controlled territory along the Egyptian border. This is the story of their march — full of hopes, determination and desperation. 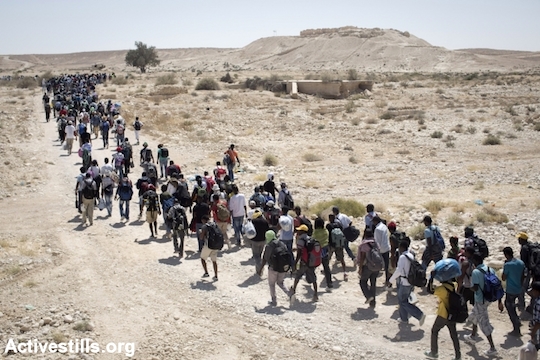 African asylum seekers march from the Holot detention center, where they were jailed, to the Israeli Egyptian border, June 27, 2014. (Photo by Oren Ziv/Activestills.org)

Encampment air hangs hot and still. Under a dry canopy of Eucalyptus it swaddles the crowds of Sudnese and Eritrean asylum seekers who make temporary beds here, some 300 meters from the Israeli-Egyptian border.

Hassan Abdaiiah Adam, a 30-year-old asylum seeker from Darfur, passes thick fingers over the yellow whistle that he wears around his neck. He has the worn aspect of someone who hasn’t been getting enough sleep, his brow permanently furrowed over dark eyes. He came here with almost a thousand others in a march from the Holot “open” detention center on June 27, protesting their indefinite detention by Israeli authorities. 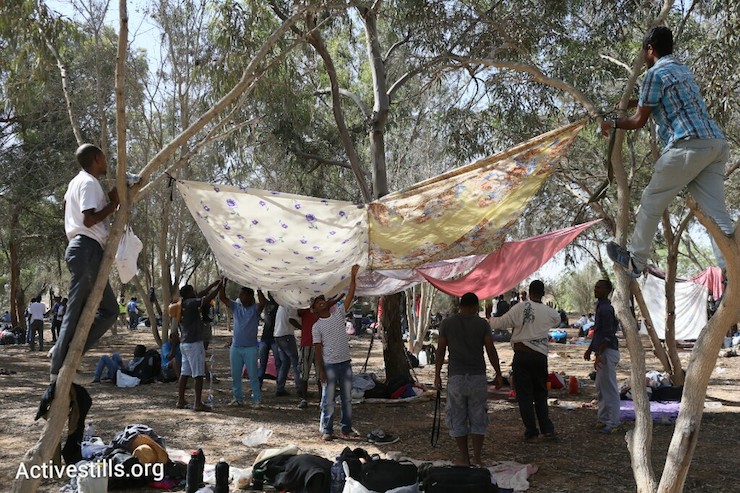 African asylum seekers build shelters from the sun at a small forest a few hundred meters from the Egyptian border where they slept the night, June 28, 2014. (Photo by Oren Ziv/Activestills.org)

The asylum seekers spent two days in a dusty outcropping near the Nitzana border crossing, languishing under hastily pitched fortresses of bright cloth, and stuffing tobacco into the white shafts of cigarette tubes. Here they stayed for 48 hours, until Israeli police arrested hundreds on Sunday evening, taking them to back to Saharonim, a “closed” prison where, according to a statement sent to journalists late Sunday night, they have launched a hunger strike.

The arrests came after nearly two weeks of protests within the Holot compound, during which thousands of the detainees refrained from signing mandatory roll-sheets and refused to take up work within the facility. Israeli authorities consequently transferred around 50 detainees, known leaders the asylum seeker community among them, to Saharonim on June 23.

“We are not fighting anymore,” Adam says. “We are tired. Enough. We are going back. We have no choice.” 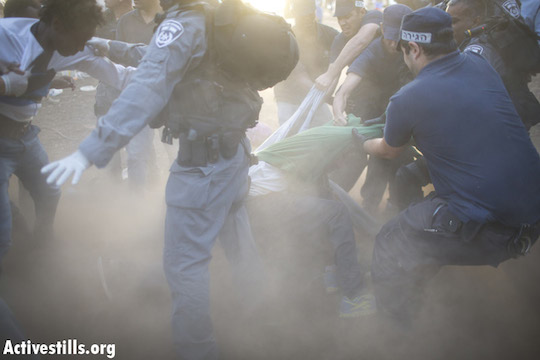 The refrain is common among the asylum seekers I meet at the camp: no option remains, nothing to lose, a brand of existentialism that appears to have become the very fabric of the asylum seekers’ recent protests. It rings through the language in the camp, occupies a tangible space between the trees.

The asylum seekers’ protests are not aimed at temporary changes to the Holot system — the release, for example, of a few jailed leaders — but at dismantling of the entire operation and the transfer of responsibility over their asylum requests to the UN Refugee Agency. The UN, they hope, will resettle them in third countries. They are done trying to change or overcome the neglectful and hostile treatment they have received in Israel; a second statement said they would again attempt to cross into Egypt if their calls are not met.

Sabine Hadad, spokeswoman for the Israeli immigration authority, confirmed to AFP that 779 people were arrested on Sunday.

Despite Holot being an “open” facility, if detainees are gone for more than 48 hours they can be arrested and imprisoned.

“Each one will be brought before a committee to explain why they violated the rules,” Hadad said. “They could face up to three months imprisonment for this offense.”

The asylum seekers were still being processed into the prison on Monday morning. Some, still left with their mobile phones, managed to send photos to the outside world. 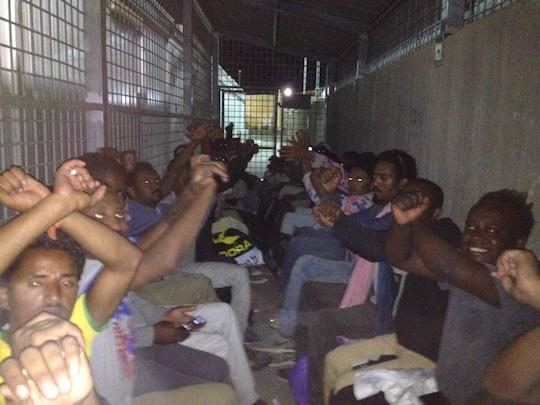 African asylum seekers waiting to be processed at Saharonim Prison, June 30, 2014. (Photo courtesy of Hotline for Refugees and Migrants)

To a land that doesn’t exist

On the second floor of 16 Levanda Street Sunday afternoon, Jack Zaidan, a refugee from Darfur, takes the microphone. He will speak in Hebrew, he says, so that Israelis can hear his story. Zaidan fled Darfur when he was 13, in the dead of night, and finished his high school education in Israel, where he studied Jewish history.

“We came here because you too were in a bad situation,” he says, “We came because you are our brothers — you understand what it means to flee from fire.”

In the light that bathes the room’s white walls, reporters jostle their microphones forward. They ask the panel — Zaidan and three other speakers from the asylum seeker community — what the protestors hope to achieve. Is the risk not greater in Egypt, where refugees are returned to their countries of origin, or in Sinai, where they are subject to the torture of traffickers? Where are you going? 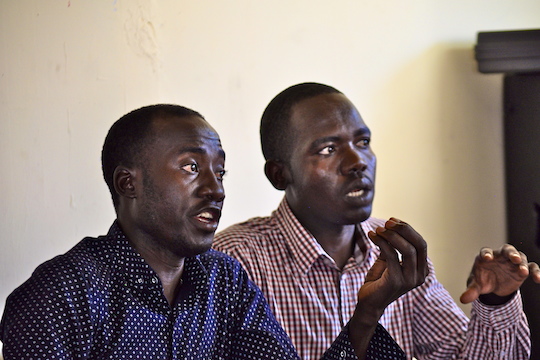 Their answers invariably concern a nominal belt of UN soil on the stretch between Israel and the Egyptian Sinai peninsula that they have chosen as their journey’s terminus. That this enclave materializes only in the asylum seekers’ internal conversations, that it fails to plot on any cartographic reality as such, does not appear to be a matter of grave consequence. On this point the asylum seekers are resolute: fictive or not, they will reach the UN zone, the same determinism that is the provenance of the protests itself.

“It doesn’t matter if you are at the border, or in Egypt or in Israel,” one of the speakers says. “We are going back. We have no choice,” a rendering of the same chorus. 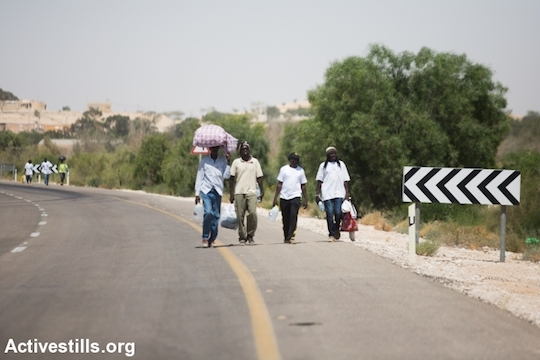 Walpurga Enlbrecht, the UNHCR representative in Israel throws cold water on this development in rhetoric through an echoing phone line.

“There is no UN land between Israel and the Egyptian Sinai peninsula,” she says, as if to explain to me the semantic unlikelihood, even impossibility, of a thousand very real bodies making exodus into fiction. “Their being stuck in a no-man’s land between the fences makes certain issues of access arise.”

It is perhaps best understood not as the land itself but as a reference made to the “idea” of land, a proposition to be offered as if the use of certain language will somehow change the physical or political makeup of their situation, a brand of magical realism known best, if not only, by the desperate.

Where hopes turn to dust

I board the third bus to leave Levinsky Park Saturday morning. We head down to the Israeli-Egyptian border, bringing with us a generator, 17 six-packs of bottled water and three cartons of cigarette tubes. We carry the precious cargo over the thick back roads that bracket South Tel Aviv, on past the place where drooping wires and corrugated tin give way to two-and-a-half hours of open desert.

Osman, a refugee from Eritrea who sits perched on the seat in front of me, speaks rarely. When he does it is in a language so sparse and non-comittal that it often fails to convey the central details of his situation. What’s more, he bears a propriety unique to life on the margins, a quality that gives itself to certain contradictions in terms.

He tells me he has lost the ability to work in Israel, then twice attempts to buy me coffee at a gas station on the way. He wears a striped sweater and collared shirt over his slender frame. The temperature is 102 degrees Fahrenheit.

His story contains few particulars, slipping often into narration in the collective first-person. He isn’t one much given to self-pity. They fled autocracy and forced labor in Eritrea, sojourned in baking desert camps and endured torture by traffickers in Sinai – where Taha lost two fingers – on their way here. They left their homes in Darfur, a region so restive that it has become virtually synonymous with genocide and ethnic conflict in the 21st century. They left with fire at their backs. 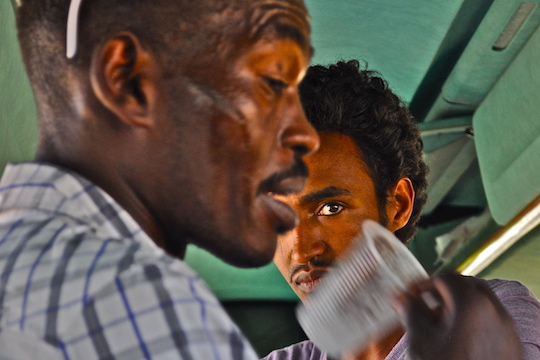 We approach the detention center, which lies flat and silent against the sand. Some passengers get off the bus here, joining a crowd of detainees standing outside the facility’s perimeters. As the bus pulls away, they begin disappear behind metal gates topped with coils of barbed wire.

They came with hopes of refuge, medical care and the freedom to work for a living wage. Ambitions, Taha tells me, that turn to dust in Holot, and his deep-set eyes convey something about shattered resolves that his words can’t carry, the central fact on which Israel’s refugee narrative has come to turn.

Get Our Weekly Newsletter
Before you go…
A lot of work goes into creating articles like the one you just read. +972 Magazine is nonprofit journalism, owned by many of our writers, editors, and journalists. In order to safeguard that independent voice, we are proud to count you, our readers, as our most important supporters. With your support, we can keep +972 Magazine a strong, independent, and sustainable force helping push the global discourse on Israel/Palestine.
DONATE
More About voluntary repatriation 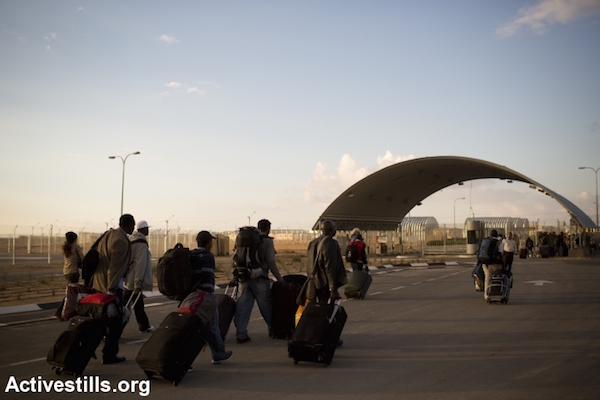 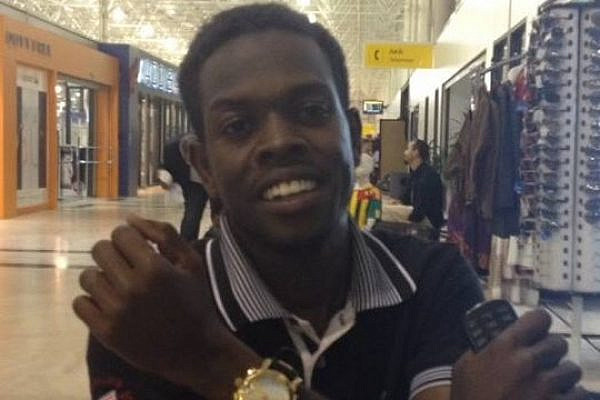 Sudanese asylum seeker returns to Israel following ‘deportation’
Sadiq al-Sadiq says he never agreed to return to his home country, where he fears persecution. Israeli authorities, however, say he signed a document agreeing to just that. Based on Avi Belcherman’s Hebrew article on +972’s sister site, “Local Call” Adapted by Michael Omer-Man A Darfurian asylum seeker who left the Israel last week under…
By +972 Magazine May 9, 2014