Ido Naveh says he will continue to stage non-violent protests outside Israel’s desert detention camp until all the asylum seekers held within it are freed. 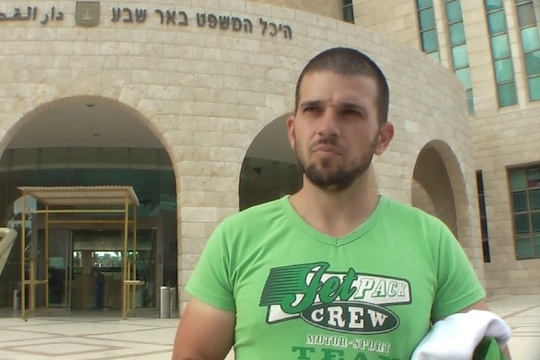 Many Israelis may support their government’s efforts to keep non-Jewish asylum seekers from Africa at bay and beyond the borders of the country. In recent weeks, however, one man has repeatedly provoked prison officials into detaining him, in order to protest the imprisonment of the Africans.

Ido Naveh of Jerusalem has been detained at least three times in the last month for maintaining a non-violent vigil outside of Saharonim, Israel’s desert detention center where it has jailed thousands of Africans since June 2012 without legal recourse. The Supreme Court last month struck down the January 2012 amendment authorizing their incarceration and instructed the state to release all asylum seekers within 90 days. The government, however, announced that it plans to introduce new legislation to bypass the court ruling and keep the Africans locked up. Naveh is vowing to keep returning to Saharonim, insisting that he too be arrested, until such time as all the asylum seekers have been freed.

The standoff between Naveh and the Israel Prison Service has followed the same script three times already. As he approaches the prison entrance, officials instruct Naveh to leave the area. He refuses to do so, and so the officers detain him and bring him for questioning to a police station in Dimona, an hour’s drive. Once police ascertain that he is unwilling to sign away his right to protest at the detention center in exchange for his immediate release, he is sent to Be’er Sheva to spend the night in a jail cell. The following morning, he is brought to court. Refusing the aid of a lawyer, Naveh then tells the presiding judge of his plans to return to Saharonim at the first opportunity and continue protesting. Each time, the judge has released him without any restrictions or conditions.

Naveh told +972 Magazine that he was inspired to sacrifice his own freedom in order to fight for the freedom of others after he read the writings of Henry David Thoreau and Mahatma Gandhi. He fights his fear of being sent to jail for longer periods of time – a very real possibility – by listening to the recorded speeches of Martin Luther King Junior. Naveh told +972 that he hopes other people of conscience will be moved by his gesture and become motivated to join him in the struggle. Already, three other Israeli women accompanied him to Saharonim on October 3 were also detained and taken to Dimona for questioning. Naveh plans to return to the detention center on October 23.

Ido Naveh on why he decided to begin protesting:

Naveh on his protests, arrests, interrogations and release:

The detainees are brought to the Dimona police station: