Dareen Tatour has spent over a year and a half under house arrest for publishing a poem on her Facebook page. Since then, she has lost the ability to support herself, and cannot leave the house without a ‘chaperone.’ Orly Noy spoke to Tatour about the difficulty of living under constant surveillance, her love for Hebrew and Arabic poetry, and the need for Jews and Arabs to learn each other’s language. 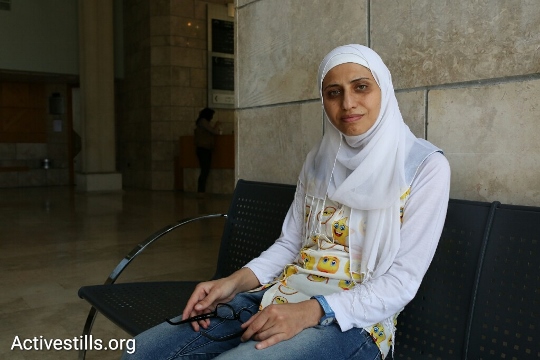 One day in the future, when they write the book on the belligerence and aggression of the State of Israel toward its Arab citizens, the story of Dareen Tatour — who has been under house arrest for nearly two years, including three months of jail time — will have its own special chapter dedicated to it.

Tatour was arrested in October 2015 for both a poem and Facebook post she published. Since then, the state has been waging a legal battle, which has included bringing in a series of experts on both Arabic and Arabic poetry, in order to dissect the words of a young poet who was nearly anonymous until her arrest. Her trial, and the state’s attempts to turn a poem into an existential threat, has been nothing short of Kafkaesque.

I spoke to Tatour by telephone, from her home in the village of Reineh, near Nazareth. As part of the conditions of her house arrest, Tatour is not allowed to use the Internet or smart phones. “So I started using dumb phones,” she laughs. Soft spoken, Tatour maintains a reserved matter-of-factness even as she recalls those first knocks on her door and the moment everything changed.

“It was on October 11, 2015. It was 3:30 a.m. when they suddenly they knocked on the door. I was sleeping, and I heard my mother and father coming to wake me up. There were many police officers, more than 10. They said nothing except that I had to come with them. My mother and father tried to ask what happened, what I did, but the officers only responded with ‘she knows.’ I know I did nothing wrong, so I didn’t understand what was happening. It was very frightening, I thought maybe it was a case of mistaken identity.” 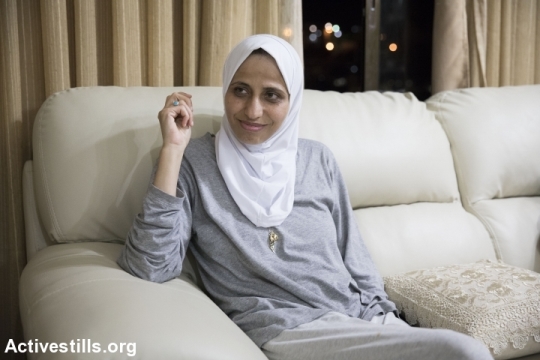 Daren Tatour is seen in her home in the village of Reineh, near Nazareth, August 23, 2017. (Oren Ziv/Activestills.org)

“They took me to the police station in Nazareth, where I waited in the yard until 6 a.m. As I waited, every officer who passed by said something hurtful. ‘You look like a terrorist,’ I got a lot of that. That word was repeated often. Afterwards they let me into the building where I was interrogated. I wasn’t shown a thing, I was only told that I was accused of incitement to violence, terrorism, and threatening to kill Jews on Facebook. I remember it was freezing, that I had walked into a morgue. At 9 a.m. I was taken to another interrogation, before I was taken to the court house at around 9 p.m., where they extended my detention.

“Later they asked to extend my detention until the end of the investigation, transferring me to Jalame Prison, and then to Damon Prison. I suffered greatly, since they allowed smoking in the rooms, and the place was not clean. After the third interrogation, when they brought the poem for the first time, it was like watching myself in a movie. I am going to sit in prison because of a poem.”

Since then, Tatour’s poem has kept the Israeli legal system busy. After spending three months in prison and six months under house arrest in Kiryat Ono, near Tel Aviv, she is now under house arrest in her parents’ home in Reineh. After more a year and a half, she was finally allowed to leave the home for a few hours a day, although she must be accompanied by one of eight court-approved “chaperones.” “My eight prison guards,” she says, laughing again. 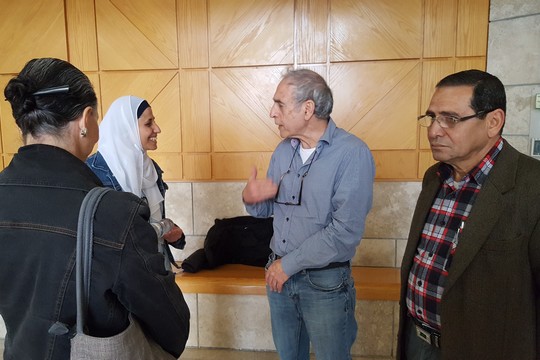 “The hardest part is that I can no longer support myself,” she says. Until her arrest, Tatour worked for five years as the manager at a beauty salon in Nazareth, in charge of marketing. “I tried to find work from home, but it is very hard because everything is internet-related. The condition from the beginning was that internet or smart phones were forbidden anywhere I lived under house arrest.” Tatour’s parents and two brothers also live at home, which means they too cannot use a computer with internet.

What are you doing at home these days?

Not much. I write and read a lot — poetry, literature, in Arabic and Hebrew. I read Amira Hess’ book of poetry, as well as poems by Alma Katz. In Arabic I love Nazik Al-Malaika, Mahmoud Darwish, Samih Al-Qasim, Khalil Gibran, as well as classic poetry such as Al-Mutanabbi.

At what age did you start writing poetry?

“More or less since I was seven. I remember my first grade teacher asking me what I wanted to be when I grew up, and I responded ‘I want to write.’ I don’t know where I got that answer from, but I do not forget it. My love for writing is not new. After learning the alphabet, I began doodling and writing — I’ve been journaling since I was very small. 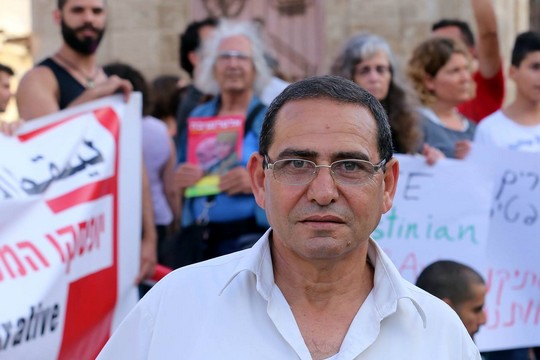 “As a child, words were something that kept me busy. I would drive my teacher crazy because I would ask her for the definition of all kinds of words. She would always tell me to go look it up in the dictionary. So that’s exactly what I did. I read the Arabic dictionary like a novel, from the beginning to the end. Then I did the same with the Hebrew dictionary.

“I always worked alongside Jews. I think it is important that both sides — Arabs and Jews — learn each others’ language.”

Tatour’s first collection of poems, titled The Last Invasion, in 2010. “When I arrested, the second book was almost done — even the cover was ready. I was getting ready to send the book to print. Let’s just say that a few new poems have been added to the book since,” she says.

Aside from issues of national identity, what other topics do you touch on in your poetry?

“I write about the status of women in Arab society. Women are at the center of my poetry — their hardships, the abuse they face. And children war. The weakest, most difficult aspects of life. These are things we cannot ignore. Even if they are difficult issues in Arab society.”

Was it strange sitting in the court room and listening to people interpret your poem?

“Yes, it was difficult to digest. The serious problem was that they mistranslated it. It isn’t even an issue of interpretation — the translation was wrong, and thus the police’s interpretation was completely off.”

What kind of responses have you received?

“I have received incredible support from my friends, including from Jewish Israelis — support that has really surprised me. It has given me a lot of strength. They tried to put me in a place I didn’t want to be in; the first time they told me I was a terrorist, I felt a great deal of pain. This is a very harsh word. They tried to stigmatize me, but I am glad to say they were unsuccessful. There are people who know the truth and I am happy that they understand my words correctly. I want to thank all those who have supported me.

She laughs again. “So-so. I am trying to remain optimistic. There is a poem in my book about handcuffs, which terrifyingly enough came true. They say that every poet is a prophet, and I feel that. In this country we cannot be too optimistic, but I am trying my best.”

email
Before you go…
A lot of work goes into creating articles like the one you just read. +972 Magazine is nonprofit journalism, owned by many of our writers, editors, and journalists. In order to safeguard that independent voice, we are proud to count you, our readers, as our most important supporters. With your support, we can keep +972 Magazine a strong, independent, and sustainable force helping push the global discourse on Israel/Palestine.
DONATE
More About Palestinian Citizens of Israel