The police and the army have yet to provide an explanation for the deployment of  a military surveillance vehicle – nicknamed the Raccoon – that followed the social justice protesters in Tel Aviv last week. It was not clear who the vehicle belonged to: it looks like an army vehicle but was operated by Border Police officers last week – or at least that is what the IDF claimed.

Last night (Saturday) the vehicle made another appearance in Tel Aviv, this time escorting the counter protest to the one organized by the establishment against “draft dodgers.” It made its way past the protesters as they gathered at the meeting point on Kaplan Street, and then parked not too far away from where the protest took place at Habima Square –  in a spot designated strictly for employee parking. 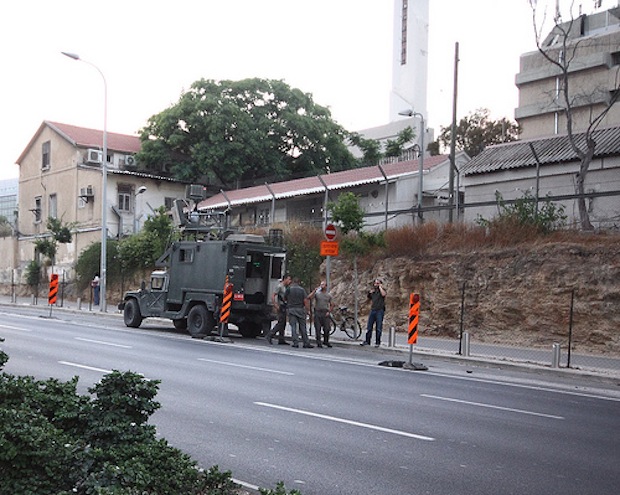 I tried to get close to the vehicle in order to figure out – by identifying its license plate – who it actually belongs to: the IDF or the Border Police. The former uses military numerals, while the latter uses police numerals. The Raccoon had no number on it at all. Shortly thereafter, a semi-undercover cop approached me (he was wearing civilian clothing but was overtly carrying a radio device on this left shoulder) and removed me from the area.

MK (Hadash) Dov Khenin submitted a query questioning the government’s use of a military surveillance vehicle against peaceful protesters. He has yet to receive an answer. The police also deployed undercover cops – or more accurately, semi-undercover – who videotaped the protest and broadcast it in real time to their headquarters.

It was easy to identify them as a result of the antenna protruding from their backs. The only democracy in the Middle East looks much more Middle East than democratic recently. Whoever thought the occupation would stop at the Green Line should think again.

Translated from Hebrew by Mairav Zonszein.

Related:
Solidarity vs. militarism: The Zionist contract and the struggle to define J14
Occupation comes home: What was an military surveillance vehicle doing at a protest in Tel Aviv last night?

email
Before you go…
A lot of work goes into creating articles like the one you just read. +972 Magazine is nonprofit journalism, owned by many of our writers, editors, and journalists. In order to safeguard that independent voice, we are proud to count you, our readers, as our most important supporters. With your support, we can keep +972 Magazine a strong, independent, and sustainable force helping push the global discourse on Israel/Palestine.
DONATE
More About Israeli Army