Nine years on, Yasser Arafat’s death brings up more questions than answers. Speculation runs rampant as to the nature of his death, while the potential for a scientifically conclusive cause of death, let alone the identity of a possible perpetrator, fades away. 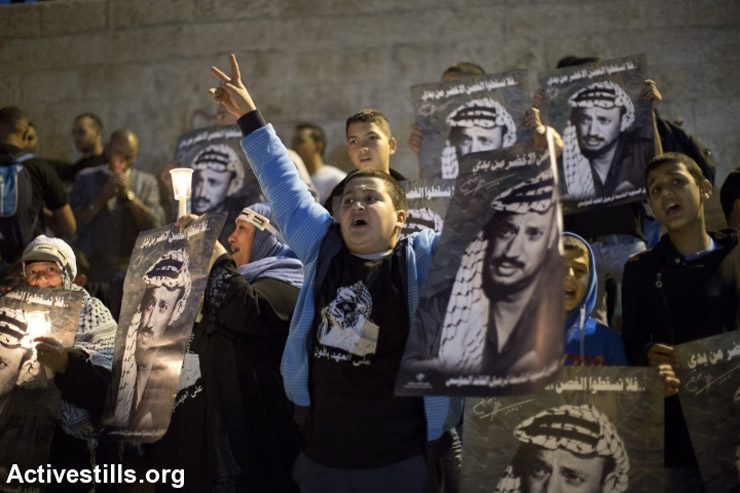 In “Killing Arafat,” a recent Al-Jazeera documentary on the mysterious death of Palestinian leader Yasser Arafat, former Palestinian Foreign Minister (and Arafat’s nephew) Nasser al-Qidwa says that there is a reason why no autopsy had been conducted on the venerated PLO chairman. According to al-Qidwa, the Palestinians “would have seen with their own eyes a huge betrayal, and a big crime committed against them – the crime of killing their own leader.”

Al-Qidwa says he believed his uncle had been poisoned from the very beginning. “There was clear evidence that this was a case of assassination, that Yasser Arafat was actually killed by poison,” he says in the documentary.

To those who saw him at the Muqata’a in Ramallah in October 2004, it quickly became clear that Arafat had more than just a bad case of the flu. Perennial Palestinian chief negotiator Saeb Erekat told Al-Jazeera that during his final days at Percy Military Hospital outside Paris Arafat he received a phone call from al-Qidwa. According to Erekat, Al-Qidwa asked him “to tell the Americans to ask the Israelis for the antidote.”

Al-Jazeera gave no further information about what the Americans may have said or done. But no antidote seems to have been produced, and Arafat died on November 11, 2004.

In July 2012, Clayton Swisher’s Al-Jazeera documentary, “What Killed Arafat?” reported stunning findings from a Swiss lab that indicated that Arafat was potentially poisoned by the radioactive polonium-210. The news was a jolt to the Palestinian leadership in Ramallah, which had already survived Al-Jazeera’s January 2011 special series on the “Palestine Papers” (in which Swisher was also involved).

Swisher later wrote that “following our 2011 scoop…a mutual friend of Suha Arafat suggested I might want to meet the former first lady.” He then worked on the two polonium investigations in close collaboration with Arafat’s widow, who has lived abroad with her daughter for years.

Some among the Palestinian leadership believed Al-Jazeera was out to get them. By contrast, Abbas was said to have opposed an autopsy at the time of Arafat’s death, allegedly “to avoid any problem with the French authorities.”

Although poisoning was suspected, there was apparently no effort (even at the time of Arafat’s burial in Ramallah) to take samples from his hair or fingernails for later testing.

Meanwhile, Swisher was subjected to conspicuous surveillance during his work visits to Ramallah, and was treated with disdain by Palestinian security personnel as well as by Mahmoud Abbas. Swisher recently tweeted that during a show on Al-Jazeera Arabic show that discussed his findings, viewers were asked whether they thought the PA “wants to find who killed Arafat”? The result: “of 10,438 polled, 93% answer NO.”

Arafat’s remains were exhumed between November 26-27, 2012. Samples were distributed to Swiss experts and French judicial investigators, as well as to Russia, at the explicit request of Abbas.

In a November 11 interview, the head of the Palestinian committee investigating Arafat’s death, Tawfik Tirawi, told Voice of Russia: “We trust the Russians and that’s why we asked them to launch an independent inquiry.”

Swisher reported, however, that he was contacted by and later met with an informant in Yerevan, Armenia who claimed that Russia’s Foreign Ministry had instructed the Russian lab to say its tests were “inconclusive.” So far, the only part of the Russian report made public is a 15-page conclusion, posted on Al-Jazeera’s website.

During a press conference in the Ramallah Muqata’a on November 8, Dr. Abdullah Bashir (head of the medical committee which is part of the Tirawi-lead investigatory team) revealed that Russian experts had made a second visit to Ramallah in mid-March 2013.

While in Ramallah, they took some of Arafat’s remaining personal effects (left behind in the Muqata’a after his medical evacuation to France) for testing. According to Bashir, these items were found to be “free of toxic or radioactive substances.”

Tirawi, who also spoke at the press conference claimed that Swiss and Russian testing had found “other substances” in the forensic samples, and that “new facts” are now being studied. At one point during his speech, Tirawi waved a document that he claimed was a compilation of Israeli “and even American” statements that said that Arafat should be killed. His claim that “Israel is the first and only suspect” grabbed the media’s attention.

Tirawi, the former head of Palestinian General Intelligence in the West Bank who now heads the Palestinian Police Academy, told me in an interview in his Jericho office last year that the current stage of the investigation began on October 18, 2010. The investigation, he said, was done in cooperation with the Yasser Arafat Foundation in Ramallah, which was founded by Nasser al-Qidwa.

Not long after Al-Jazeera first reported on the polonium-210 found in Arafat’s personal belongings, the Yasser Arafat Foundation published what it claims was the deceased leader’s entire medical file on its website.

The file shows that Dr. Fouad Sabatin, a Palestinian oncologist and hematologist, was called in to the Muqata’a for a consultation on October 20, 2004 – the date on which, according to Al-Jazeera, Arafat’s blood platelet count suddenly nosedived “putting Arafat at a high risk of death from internal bleeding.” [A Palestinian medical report in the file shows a volatile platelet count that day, and a precipitous fall just days later, which explains the decision for medical evacuation from Ramallah early on October 29]. Dr. Sabatin, a former head of oncology at the Augusta Victoria Hospital on the Mount of Olives in Jerusalem, told me that although he did go to the Muqata’a that day, he “didn’t have the chance to see Arafat in person.” He was never told why.

Sabatin said that he had been asked by Arafat’s physician to consult about the low platelet count that had shown up in blood tests. There are hundreds of reasons why the low count may occur, he said, and that various causes have to be excluded before a diagnosis can be reached. Poisoning is usually the last on the list, he indicated. Sabatin also recalled that the medical focus at that time seemed to be on Arafat’s immune system.

But poisoning quickly moved higher on the list of hypotheses. According to a Palestinian medical report from October 22, 2004, “Blood samples were taken and sent to Madame Arafat to be sent to France for viral and toxicological screening.” However, none of the results from any of these screenings appear in the file. This was not the only time that Arafat’s medical samples had disappeared.

In December 2010, Dr. Abdullah Bashir wrote to the French authorities, asking for Arafat’s biological samples as well as the results of toxicological testing which, he noted, were conspicuously absent from the hospital report. The French reply, in January 2011, stated that Suha had already been given the medical report, which was then archived.

Suha contacted Swisher within a few weeks. According to Swisher, Suha gave him access to the entirety of her late husband’s medical file, including x-rays, personal possessions, and even his kuffiyeh, as part of the first Al-Jazeera investigation. But, as shown in the documentary, the French military police informed Suha in writing that Arafat’s biological samples “had been destroyed in 2008” (according to Suha, this happened because “nobody asked”).

Now, in “Killing Arafat,” Al-Jazeera has revealed that over 100 of Arafat’s biological samples have been found by detectives sent by French judicial authorities as part of their murder investigation. Swisher reports, however, that there were “not enough cells” left in these re-discovered biological samples for radiological testing.

The Palestinian committee has called on the French authorities to present their much-awaited findings on the testing of Arafat’s remains. There was no mention of this during French President Hollande’s visit to Ramallah on Monday, nor was there any public mention of Abbas’ earlier request for Hollande’s help in setting up an international inquiry into Arafat’s death.

Furthermore, French authorities diplomatically suggested that the French may be withholding their findings due to the internal requirements of the French judicial processes (initiated at Suha’s request). But Tirawi contends that the French know the “complete truth, they know all the details about the martyrdom of Yasser Arafat.”

“Killing Arafat” leaves out as much of the science as possible – but questions have been raised.

In 2012, the majority of samples from Arafat’s toothbrushes and underwear were found to contain “unsupported” polonium-210 (meaning there was no lead-210 present, as there would have been had it been found in nature).  Swisher explained that this is the kind of the polonium-210 that is produced in a nuclear reactor.

However, a newly-released 108-page Swiss lab report states that Arafat’s bones contained “supported” polonium (lead-210 was present), a discrepancy that remains unaddressed by Al-Jazeera. However, the Swiss lab report also contains the intriguing suggestion that an unusual ratio/distribution of the two substances might be “compatible with an intake of lead-210 that occurred at the onset of the first symptoms [October 2004].”

The lab further hypothesizes that the lead-210 found in Arafat’s remains may be masking the presence of “unsupported” polonium-210 – the kind that would be used as a poison. In its review of the Swiss lab results, Nature.com stated that it is possible that Arafat was given a dose of polonium-210 “contaminated with lead-210.”

On his Twitter account, chemical weapons expert Dan Kaszeta stated that “the 108 page Swiss report is interesting as much for what it doesn’t say as in what it does.” One thing the Swiss report didn’t do, according to Kaszeta, is reference the “huge problems with Polonium-210 cross contamination that Britain faced in the Litvinenko investigation.”

Kaszeta, who previously worked on the Alexander Litvinenko case, told me in an email exchange that polonium can be found, for example, in cigarette smoke. Thus, a heavy smoker may have inadvertently contaminated the exhumation site. “The clothing of a chain-smoker is going to have polonium in it from tobacco residue,” he wrote, “if you handle a few cigarette butts then handle the shovel and then the remains of Mr. Arafat, that’s plenty of cross-contamination potential as one hypothetical example.”

In a piece published by Kaszeta on November 11, he writes:

“Could Mr. Arafat have been poisoned by polonium? Certainly. Is it possible that the evidence could have been tampered with? Yes. Is it possible that much of the polonium detected is from natural sources? Yes. But the passage of time and an eroded chain of custody mean that forensic science done in 2012 faces serious limitations, and we may never be in a position to know for sure.”

The mystery has not been solved by science. Thus, Tirawi’s investigation into who did it may be the only way forward.

Marian Houk is a journalist covering developments in Israel and Palestine.