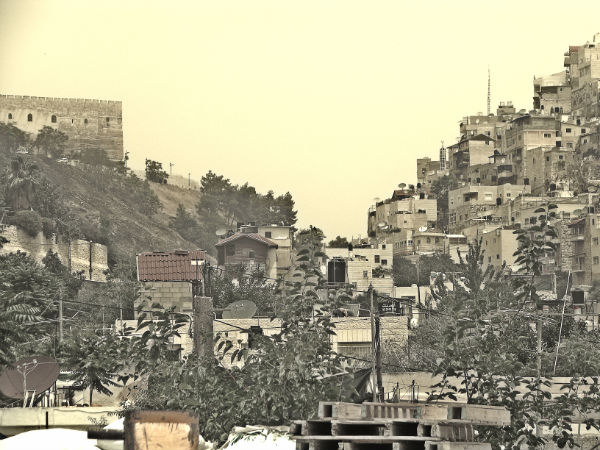 To get to  know the world, one must get out of bed. To get to know it deeply, it’s best to get into another bed and then out of that one. This morning I woke up on a mattress placed on a floor in Silwan, having stayed over with the most lovely friends. Stepping out into the new day, I got to walk into the heart of my native Jerusalem from a direction henceforth unfamiliar.

The Palestinian neighborhood of Silwan, a struggling borough to begin with, is currently facing a takeover attempt by Israeli nationalists. It is supported by the Jerusalem municipality under the leadership of reactionary mayor Nir Barkat and by the Netanyahu-led Israeli government. Extremist settlers are moving in daily, while scores of Palestinian houses face demolition for alleged “illegal construction” (in reality, Palestinians can never construct legally in East Jerusalem. Building permits are not issued to them).

Silwan is a treasure chest of archeological treasures. The heart of the city lay there for centuries before being moved to the northeast during Hellenist times. These treasures, including a striking subterranean irrigation system dating back to the 8th century BC, are under the exclusive control of a racist, politically driven Israeli organization known as the Ir David foundation. Tourists visiting the “City of David” archeological compound, are enriching the foundation and thus helping it wreak havoc over the lives of the quarter’s Palestinian residents, in preparation for a much dreamt-of and slowly materializing mass expulsion.

Silwan is made up of two dense clusters of houses, each built on a steep slope of the narrow valley of Kidron. The “lobe” of the neighborhood in which I stayed is the one directly below the Dung Gate, the most humble opening in Old Jerusalem’s grand wall. On my way up to a first cup of coffee in the Old City, I passed several Jewish men wearing kippas.

There’s nothing more wonderful about Jerusalem than its diversity. The mix of different attires and attitudes found on the city’s streets is the source of its magic. The spell is broken, however, when one recalls why these people move to Silwan (and to Sheikh Jarrah and other predominantly Palestinian East Jerusalem neighborhoods coveted by the Israeli right). They are not there in order to be good neighbors. They support house demolition initiatives that would leave their neighbors homeless. I believe strongly that Jews should be free to live wherever they desire. I equally believe that people with harmful intentions should be controlled, not encouraged.

Here they are encouraged, supported and protected. Armed soldiers are everyewhere, making sure no harm comes their way. I walked past an armored vehicle at the top of the hill and passed through the Dung Gate. Inside the Old City, a big party was taking place. Religious Jews wearing white were leading massive groups of secular Jews into the plaza of the wailing wall, beating drums and blowing the shofar.

I had no idea what that was about and didn’t ask. A Silwan native coming up the hill and into the city would most likely not have asked. He would simply sense the mix of religious fervor and nationalism. He or she would have ascended from a neglected slum into a city controlled by crazed messianic drummers. From this perspective Israelis are simply scary. Here they are, enjoying an orgy of bugle blows and dancing all through the affluent Jewish quarter and militaristic plaza of the Wailing Wall. The ruling class, full of disdain for the Silwan’s residents, is having a grand time only a few steps from an endangered home.

For Palestinians, the friction, cruelty and pure absurdity of the conflict are sevenfold closer to home then they are for most Israelis. When we as Israelis, complain that the Palestinians won’t make more of an effort “to accept us” or “to make peace with us”, they often neglect to picture the environment in which these people life. We, if put in their place, would likely find “us” far too sinister to accept.