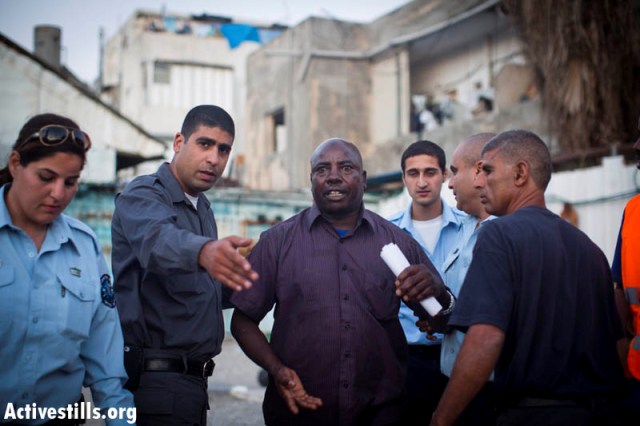 A group of municipal officials led an operation to close African asylum seekers’ illegal businesses in the south Tel Aviv neighborhoods of Neve Sha’anan and Shapira at around 7 p.m. Sunday night. The municipal officers were accompanied by Border Police officers, a photographer and several large moving trucks complete with African workers.

Splitting into groups, the law enforcers went to several bars, restaurants and grocery stores owned by asylum seekers. As their legal status in Israel forbids them from either working or owning a business, most Sudanese and Eritrean asylum seekers are forced to make a living illegally, which leads authorities to chase them down and either punish their employers or close down their shops. 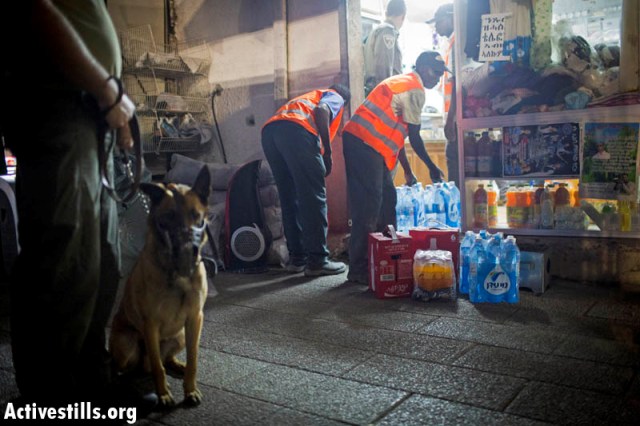 Such was the case Sunday evening. All the goods, furniture and other equipment in all the businesses were inventoried and confiscated, and the doors were welded shut. In none of the locations photographer Oren Ziv and I visited was there any resistance by the shop owners and the armed policemen (and one police attack dog) were left without much to do. Several Israeli bystanders cheered the officials for helping pushing foreigners out, while other muttered insults at them for enforcing racist policies. 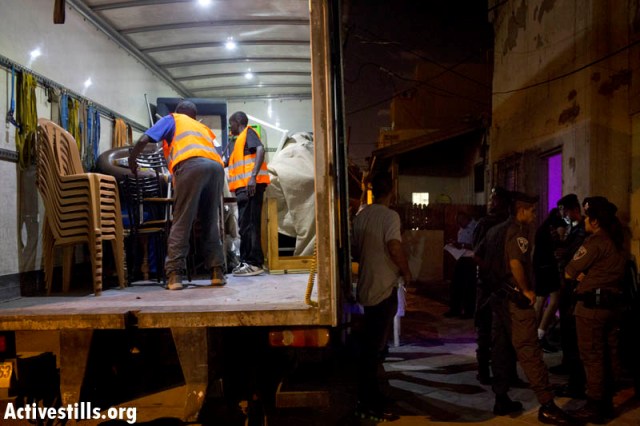 Estimates have it that asylum seekers are running hundreds of small businesses in south Tel Aviv, mostly serving their own communities and naturally, authorities cannot possibly close them all down. However, owners often complain about police brutality, as Border Police patrols force people out of bars at midnight, at times using batons and even pepper spray. The municipality, too, is working hard at combating this small world of business and leisure, but operations on today’s scale are not a common sight. 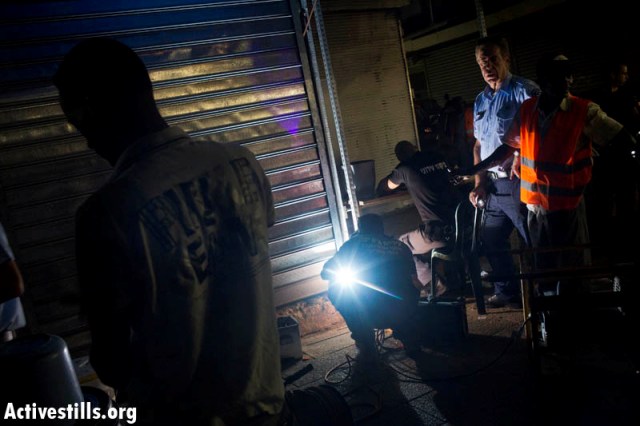 It is possible that Mayor Ron Huldai’s administration pushed the operation forward as part of preparations for the upcoming October municipal elections. Many Israeli residents of south Tel Aviv are likely to be supportive of such actions, as the feeling is that asylum seekers are burdening the already weak physical and social infrastructure and poor services provided to the mostly working or lower-middle class population in the neighborhoods. This feeling is strengthened as some asylum seekers are pushed into criminal activities and the press gives extensive coverage to the criminality. Tensions between the communities has already led to several individual and mob attacks on asylum seekers by Israelis. 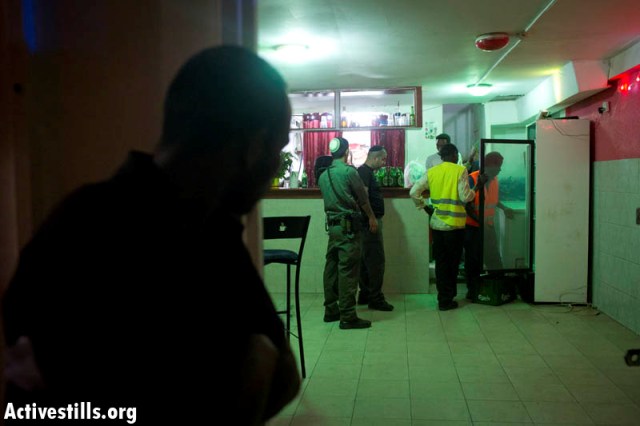 Aladin Abaker, a Sudanese refugee, published pictures from Sunday night’s raid showing Ministry of Health inspectors pouring bleach into pots of food in a restaurant, allegedly because the establishment is “a danger to public health.” He writes the following:

Friends meet in this place, the most delicious restaurant with a smell of home, to eat and remember our families in Darfur. Suddenly health inspectors and police forces swarmed in and destroyed the food we had ordered and the food in the pots, with no sensitivity to the people whose culture sees food as a sacred thing to be treated with respect. We tried to tell them that this place has been open for four years now, it’s where we eat all our meals, and not once has anyone gone ill. Even whites come to eat here…

Everybody present was in tears. The waitress told us: “I’ve seen some horrible things in my life, including torture in Sinai, but this has humiliated me more than torture.” I told her they were doing it to make our lives miserable and try to encourage us to return to Africa “willingly.” 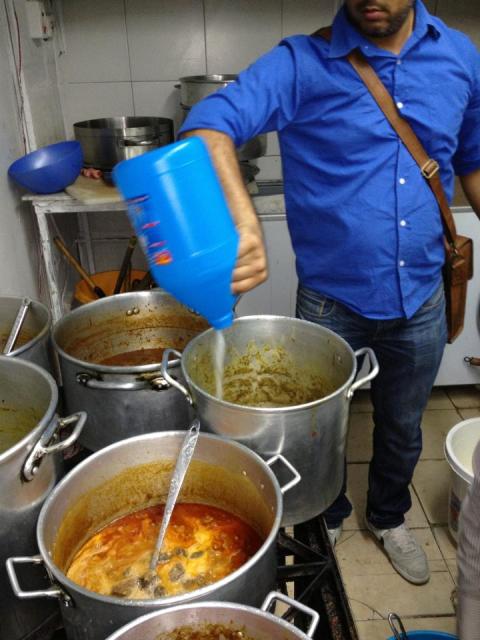 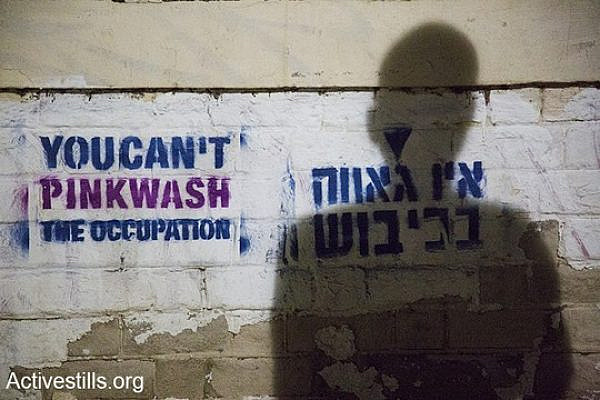 Ahead of Tel Aviv Pride, queer activists bring the occupation home
LGBTQ activists hang banners and graffiti anti-occupation slogans across Tel Aviv in the run-up to the city’s annual pride parade. 180,000 people are expected to take part in the festivities, at least half of them tourists. By Yael Marom In the run up to Friday’s Tel Aviv Pride festivities, Israeli LGBTQ activists hung banners and spray-painted…
By +972 Magazine June 3, 2016 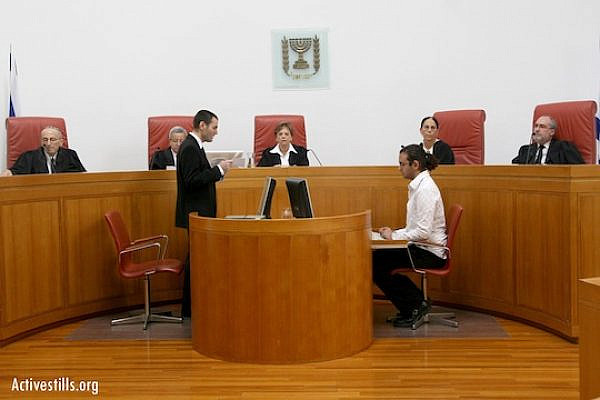 Shuttering shops on Shabbat: Hypocrisy and the rule of law
The Supreme Court recently ordered that the rule of law be enforced when it comes to Tel Aviv shuttering businesses on the Sabbath. But the court is inconsistent with its own demands, only ordering that ‘the law is the law’ when it’s convenient. These are confusing times. Our friends don’t know what to think, and…
By Laissez Passer July 1, 2013