My friend Anes Khatibi is 19 years old. We met at ‘peace school.’ If he were Jewish he would not have been arrested for a Facebook status. Alas, he is Palestinian. 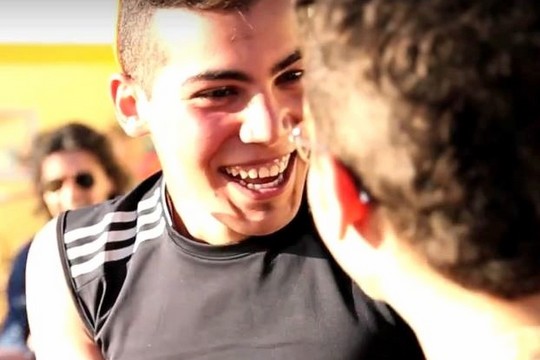 Two police officers arrested Anes Khatib, 19, from his home in Shefa-‘Amr on a Friday evening last month, and took him to the police station in the city. The original reason for the arrest was “a clarification.” Anes has yet to be returned home.

It later became clear that Anes was arrested for publishing a status on Facebook, in which he wrote, among other things, that kind words should be written about the Palestinians who died, and included slogans such as “long life the intifada,” “Jerusalem is Arab,” and “and eye for an eye.”

I had read about chilling arrests like these during “Operation Protective Edge” on “leftist” websites. This time it was personal; I know Anes and love him like a brother.

Early in the summer of 2014 Anes and I participated in a storytelling workshop as part of the “International Peace School.” Our group was made up of Arab and Jewish teens who shared a common goal of dialogue and coexistence. The workshop took place in the Netherlands, and Anes was one of the first people I connected with, already at our first meeting at the airport. He was especially friendly and full of positive energy. Throughout the workshop I was exposed to difficult stories of his life. The more we spoke, the more I was impressed by his politics and activism.

A film by Anes Khatib, Ariel Schendar and their friends in the International School for Storytelling and Peace:

The workshop, as I mentioned, took place in the summer of 2014, at the start of Operation Protective Edge — the war in Gaza. We got into a lot of discussions about the situation and I discovered Anes’s enthused and impassioned side: he was critical of the occupation and its consequences, the same way the Israeli-Palestinian conflict stirs an emotional storm among so many others.

Everyone in the workshop was critical of the political situation in some way or another, but we all held onto the belief that the solution would come from dialogue, patience, and coexistence. More than anybody, it was clear that Anes wanted to bring us all together in a friendly, loving atmosphere nourished by the joy that he brought to our social interactions.

Anes and I spoke a few times since the workshop, and recently a mutual friend told me about his arrest. I was shocked and taken aback. Like most of the Arabs I know in Israel, Agnes has experienced oppression and racial discrimination in his life.In our current reality I am glad there are people like him walking among us, people who have a strong commitment to fighting for a more just future. I’m glad that I heard his life story and his opinions and that we ended up being friends, despite the fact that I am a Jewish Israeli who could easily be associated with all of the atrociousness he experienced from a young age. I am glad that I made a Palestinian friend. I know Anes is proud to be a Palestinian.

But since I heard about his disturbing arrest, and his court hearing which resulted only in another hearing being scheduled a month later, and the fact that he has been jailed this whole time without being allowed any contact with his family — I’m most sorry that he’s not a racist Israeli soldier.

Why, you ask? Because if he were a racist Israeli soldier he could have posted a photo of himself with inciting and threatening messages, get thousands of shares — and not get arrested.

Or I wish he were a Jewish Israeli racist like Yoav Eliassi, known as “The Shadow.” Then he could have published statements with actual influence and potential deadly impact, gain an impressive following and the public support of thousands of people — and not be arrested.

If he were a Jewish Israeli racist, the brother of an assassin who himself sat in prison for his part in murdering a prime minister, he too would be arrested when his Facebook statuses became a little to extreme — but he would at least be released to house arrest. That would at least be a small comfort; then he would be able to see his family.

And if he were just any regular Israeli racist he could have written anything he wanted on Facebook without being arrested, and even if he were arrested, people would notice and the media would pay attention, and surely he would be rescued from this situation.

But because he is Palestinian, things happened differently. When I contacted people I know in the media to get publicity on Anes’s case, they suggested I write an oped for a “leftist” website, because that’s the only chance this story had of being published. I hope what I’ve written here has some impact. I can’t imagine Anes harming a single soul, not in my wildest dreams.

Ariel Schendar is a refugee and asylum seeker coordinator at Kav LaOved — Worker’s Hotline. This article was first published in Hebrew on Local Call. Read it here.