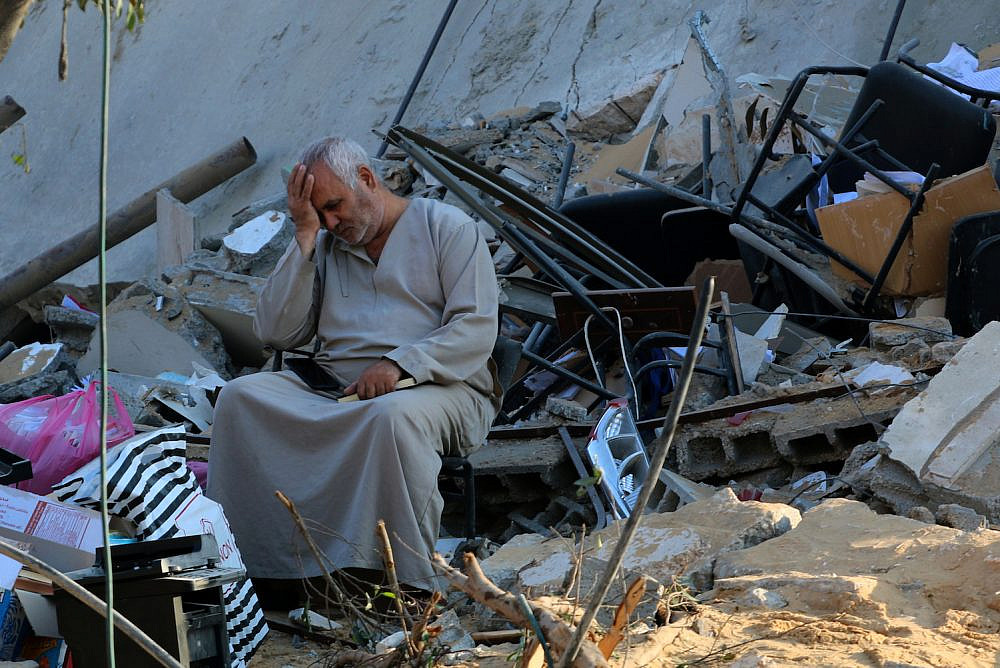 Palestinians check the damage caused after a 15-floor building was destroyed in an Israeli airstrike in Gaza City, on May 13, 2021. (Atia Mohammed/Flash90)

My body is full of rage, shaking. The anger is not only due to the latest lynching of Palestinian citizens of Israel, or the assaults on Palestinians in Gaza, Jerusalem’s Sheikh Jarrah neighborhood, and our sacred Al-Aqsa Mosque. This type of rage is rooted in the intergenerational trauma that every Palestinian has inherited, and that we carry with us everywhere.

In a video going viral on social media, a Palestinian family in Gaza is seen panicking as the sound of Israeli bombs grows nearer. The father, who is filming off camera, is heard telling his children to get up from the mattresses laid out tightly on the floor to take shelter downstairs.

I am thousands of miles away from Gaza, but watching this video resurfaced the trauma of my own childhood, as a Palestinian who grew up in the occupied West Bank during the Second Intifada. The 10-year-old me laid down in a fetal position in our bathtub in Beit Jala, fully dressed, with a pillow under my head. My younger brother laid next to me, also in a fetal position, asking my mom for a blanket. She handed it over and said: “What chapter of Harry Potter are we on today?”

As my mother read the book to us, I remember very clearly thinking, “This doesn’t feel normal.” There was a spatial dissonance between my life at the time, and the rest of the world. This fracture was unbearable for a child. I understood that the world was oblivious to what was happening to us; I felt other. The pain of being unheard was more piercing than the knowledge of potential death. I imagined children elsewhere in the world waking up, going to school with a packed lunch, walking their dogs in the evenings, and going to music classes on the weekends. That vision of their right to live in banality was painful.

During those years, we tuned in closely to the radio and TV to keep track of Israel’s target of the day, and it was usually our neighborhood. When the sounds of the machine guns, tanks, and bombs were faint, we slept in our beds; but if they were slightly louder, we slept on mattresses on the floor to stay clear of the windows, in case a bullet flew in. If they were any louder, we slept in the bathroom, where the thickness of the tub kept us safe.

This was our routine for three years. But when we heard Israeli fighter jets and helicopters in the distance, we knew it was time to move from the bathroom to the basement, to hide under the staircase, where the walls and architecture were thick enough to save us if the jets dropped bombs on our house. There was always a chance we would be next. 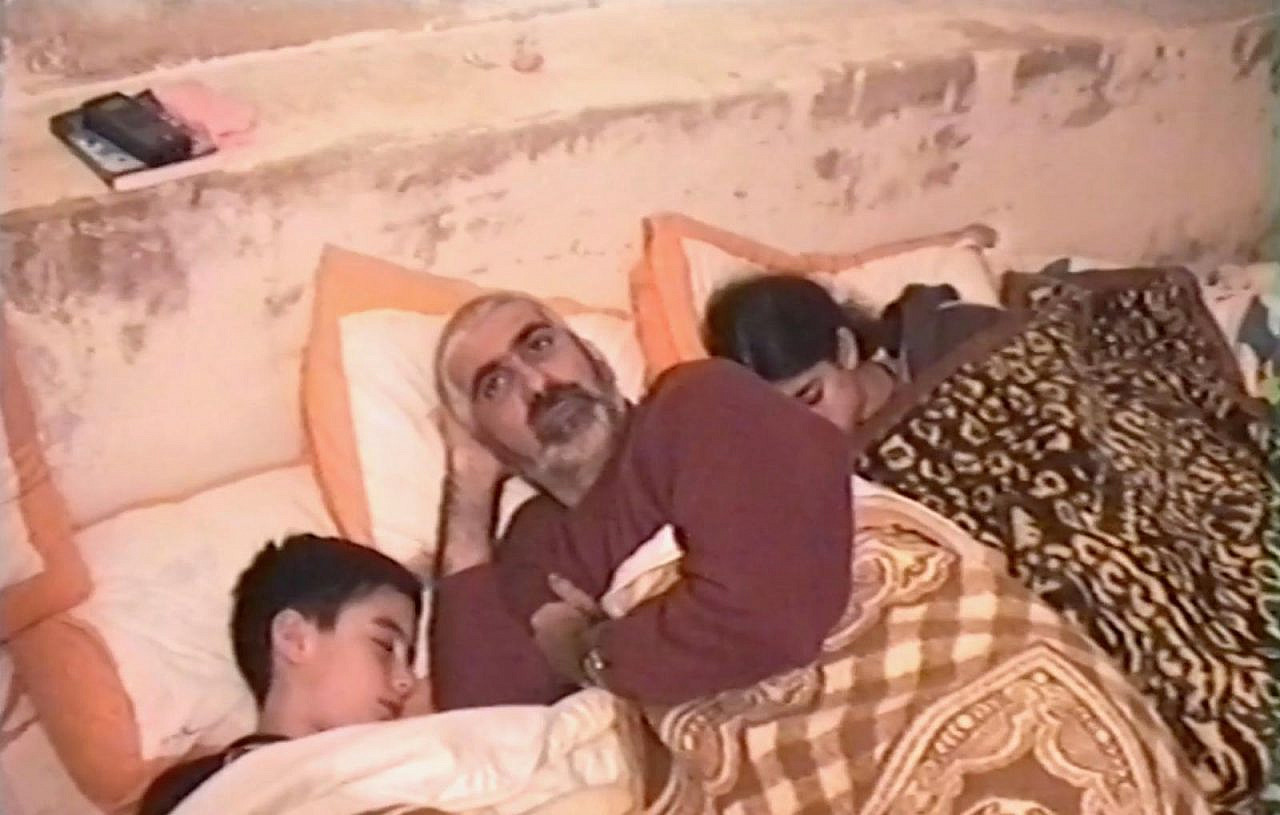 Dima Srouji, her brother, and her father sleep in the basement of their home in Beit Jala, the occupied West Bank, to protect themselves from Israeli bombs during the Second Intifada. (Courtesy of Dima Srouji)

I watched Mohammad al-Durrah get murdered by Israeli soldiers on TV as his dad did his best to protect him. The boy was on his way to buy a bike for school. When we slept under the staircase in the basement, which smelled like rust and dust from the rubble and old metal garage doors, my mom would put her arms around us every time a bomb dropped nearby.

“How dare you try to protect us like Mohammad’s dad tried to protect him?” I yelled at her one night. “Don’t pretend like you can do anything! These are bombs! We’re going to die, just like he did.”

With our privilege, we were able to get out and move away. I carried that guilt with me then as I still do now. There are significant gaps of my childhood that I don’t recall at all. The mind protects itself from traumatic events, and if you learn to live with it, trauma can be transformed in productive ways, through art, music, films, and culture.

On calmer days, this multigenerational oppression gives me purpose. It gives me strength to go through life knowing right from wrong, without any doubt. Over the years, it does not break us, but thickens our skin. Despite 73 years of Israel’s brutal force and systemic oppression, the sound of resistance grows louder and stronger within each of us. 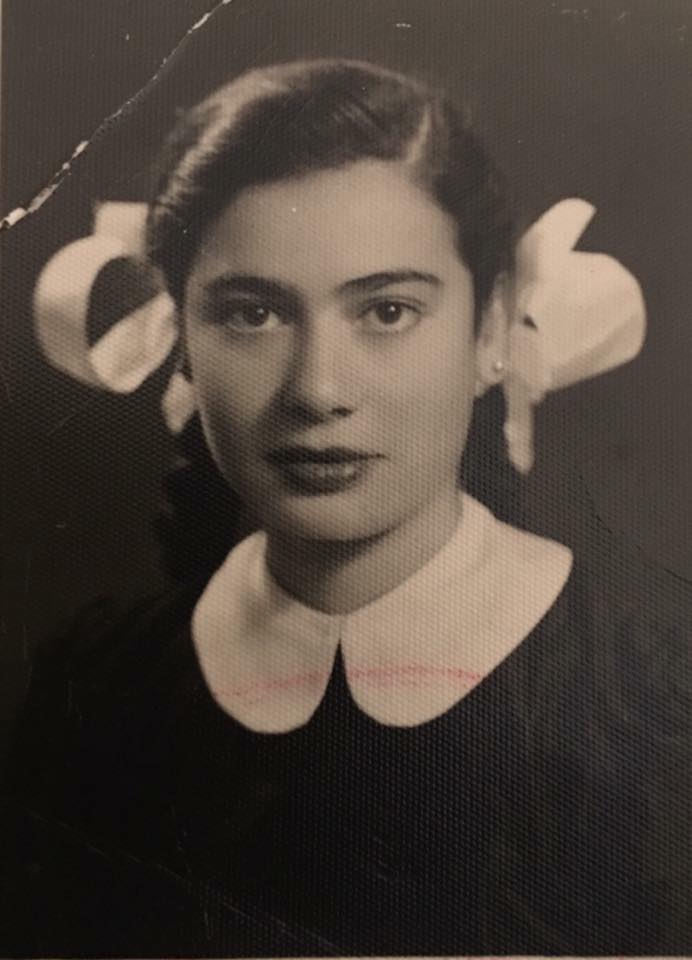 Dima Srouji’s grandmother, Layla, was forcibly dispossessed from her home in Ramleh at 10 years old. She ended up in Gaza for two years before staying in Amman, Jordan until she married Dima’s grandfather, who brought her back to Palestine in the late 50s. (Courtesy of Dima Srouji)

I feel stronger than my mother, who rebelled against the Israeli army during the First Intifada. And she was stronger than my grandmother, who was forced out of the city of Ramleh at the age of 12 during the Nakba in 1948, leaving her family and belongings behind. Her brothers were imprisoned by Israel for fighting to keep their own home. Her father, my great-grandfather, died after famously hitting his head against the wall every night from the sadness he carried, after losing his family, his home, his farms, and, eventually, his spirit.

As I watch Israel’s assaults on Palestinians in Jerusalem, Gaza, and throughout occupied Palestine now, I can’t help but think of the children who will carry this trauma for the rest of their lives. These events are not momentary, they stay with you. Palestinian resistance is not a fight against a singular event, it is a constant state of being.

The Second Intifada never ended, just as the First Intifada never ended, just as the Nakba never ended. These events live through every Palestinian. We all feel a continuous incompleteness, but we continue to endure despite Israel’s apartheid. In the face of constant oppression and destruction, we practice love — love for ourselves and love for each other. The violence across Palestine today may be resurfacing our collective trauma, but it is also making our story stronger, and our bond as a people tighter.

Dima Srouji is a Palestinian architect and artist working on projects that deal with politics and place, especially concerning Palestine. She's a graduate of the Yale School of Architecture and is currently teaching at Birzeit University. 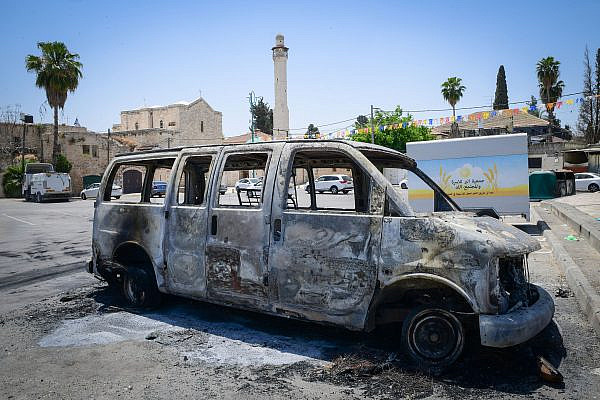 Don’t mourn a coexistence that never existed
After weeks of racist incitement, the Israeli media is suddenly talking about 'bringing back coexistence' — a paradise that was never even here.
By Rami Younis May 31, 2021 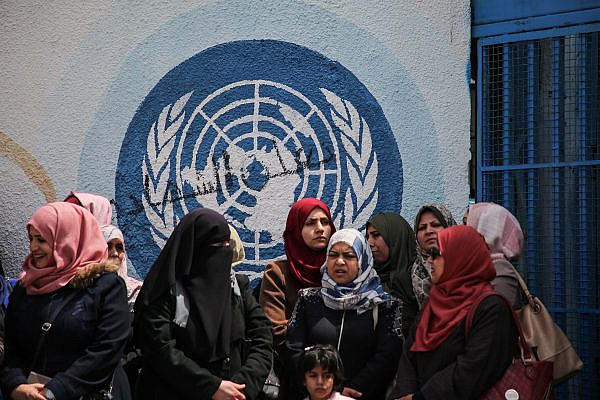 International law sides with Palestinian refugees. But can it solve their plight?
A new book dives into the myriad laws that protect Palestinian refugees and their right of return. Its proposed solution, though, may be hard to swallow.
By Sam Bahour May 2, 2021