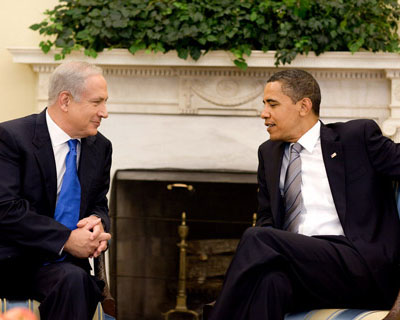 A year and a half into Benjamin Netanyahu’s second term, it’s clear that no matter what the Palestinians do or say, this Israeli PM will not sign a final agreement. I don’t think that even the US administration can change that. At most, it could ignite a process that the next government can carry on; much in the way President Bush forced PM Yitzhak Shamir into the Madrid conference.

Every Israeli leader is more likely to prefer the statues quo to concessions on the Palestinian issue (I explained why here). But in Netanyahu’s case, stalling the process doesn’t seem to be a tactical decision, but a strategic one.

As Akiva Eldar points in Haaretz today, in recent weeks, the Palestinians have agreed to everything Israel always asked them. They are ready for border changes that will leave the big settlements on the Israeli side; they agree to international forces in the West Bank that would monitor the situation and help protect the border; they are ready to give up the right of return into the state of Israel; and it seems that they are ready for a reasonable compromise in Jerusalem.

The Palestinian leadership explained its positions on all the core issues in details, both to the American envoy and in public – something that surly didn’t help them in their political battle against the Hamas hardliners – yet they got no response from Israel. Netanyahu refused to reveal Israel’s positions, in public or in private.

Every step Netanyahu took, from the partial settlement moratorium to allowing more goods into Gaza, was done under tremendous international pressure, and only after any other alternative failed. When felt cornered, he preferred to take the political battle to Washington, where, with the help of AIPAC, he repeatedly embarrassed the US president. By doing so, he made the support of Israel a partisan issue, divided the Jewish community and used much of the Israeli lobby’s political credit. All of this didn’t matter as long as he got what he wanted: for now, it seems that the administration is finally off his back.

Netanyahu is no fool. He knows what price this sort of maneuvering carries. Yet he prefers it to every alternative. I guess he estimates that the maximum he is willing to give is not even close to the minimum the Palestinians can settle with. So why do anything that would start a political fight with the right?

I don’t know the roots of Netanayhu’s positions: is it his upbringing, his reading of the political map in Israel or his view of the country’s long-term interests. Yet the bottom line couldn’t have been clearer: Netanyahu simply prefers the statues quo.

The Israeli PM is known for his inability to make tough decisions. It’s not only on the Palestinian issue, or the peace offer from Syria Natanyahu is ignoring. He refused the Gilad Shalit deal with Hamas, he didn’t change the Gaza policy until it was too late, and he avoids taking sides in controversies that divide the Israeli society, such as the forming of the national biometric database or the policy regarding the African refugees crossing the southern border.

But if this is not enough, in order to make sure he is not forced to make a move he doesn’t want, Netanyahu has surrounded himself with rightwing stuff and hawkish advisors, and moved decisions-making from the cabinet to a seven-minister forum in which the extreme right has an automatic majority. Out of the seven ministers – Leiberman, Yishy, Begin, Yaalon, Barak, Meridor and Netanyahu himself – the first four oppose all concessions, so even if Netanyahu joins Meridor and Barak – which are not too dovish themselves – he can always claim he lost the vote.

The Palestinians are right in opposing negotiations on these terms. Netanyahu would drag the talks forever, insisting as he did so far to discuss minor issues as incitement, environment and water arrangements, and avoiding the core issues. Even if the US is able to force the Palestinians into talking with Netanyahu, nothing will come out of it. The Israeli PM enjoyed a very stable coalition in the last year, yet he chose to do nothing. It’s very unlikely that he will put himself in danger as time goes on, and we will get closer to the next elections. Let’s face reality: The man simply doesn’t want it.

emailemail
Before you go…
A lot of work goes into creating articles like the one you just read. +972 Magazine is nonprofit journalism, owned by many of our writers, editors, and journalists. In order to safeguard that independent voice, we are proud to count you, our readers, as our most important supporters. With your support, we can keep +972 Magazine a strong, independent, and sustainable force helping push the global discourse on Israel/Palestine.
DONATE
More About right of return