Sometimes all it takes is a single visual to drive home the point. For Israel’s most read newspaper, visuals have become a way to race-bait and incite against Muslims, specifically against Israel’s Arab population. 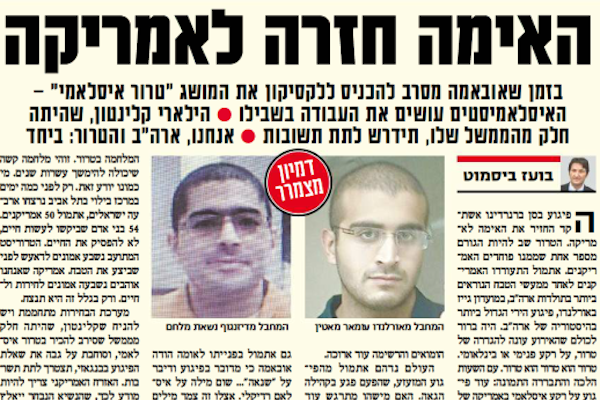 A photo comparison of Omar Mateen, who murdered 50 people in an Orlando gay club, and Neshat Melhem, a Palestinian citizen of Israel who shot three Israelis to death earlier this year in ‘Israel Hayom.’ The paper called the two ‘chillingly similar.’ (photo: Israel Hayom)

On Monday morning, pro-Netanyahu daily Israel Hayom published a photo montage comparing Omar Mateen, the American citizen who murdered 50 people at an Orlando gay club on Sunday, and Neshat Melhem, who murdered three Israelis in a shooting spree in Tel Aviv on New Year’s day. Above the side-by-side mugshots of the two killers, the editors of the paper decided to print the words: “A chilling similarity.”

The background: Israel Hayom is owned by far-right American casino mogul and Republican bankroller Sheldon Adelson. The paper, which is handed out for free, was created by Adelson as a platform for Netanyahu’s politics, all while circumventing Israel’s extremely strict campaign finance laws. He finances the paper reportedly at a considerable loss, selling ad space significantly below market value to put his competitors at a disadvantage. The paper, now the country’s most widely read, has dramatically upended Israel’s media landscape, and is considered just one of the ways Netanyahu, who also serves as the country’s communications minister, is able to maintain control over the public discourse.

The reason: Mateen and Melhem both wear glasses, and their heads are shaved. Oh, and they are both Muslims who have committed acts of terrorism and murdered innocents. And because it is not convenient to mention the more obvious parallel — between Mateen and Yishai Schlissel, who attacked the Jerusalem Pride Parade in June 2015 and murdered a teenage girl with a knife. Their crimes are far more similar; the only significant difference being that Schlissel was not able to use an assault rifle to inflict mass damage in the crowded parade. Mateen, on the other had, had little difficulty purchasing his weapons in Florida.

The context: The photos were used to illustrate an article by Israel Hayom columnist Boaz Bismuth — known for his ties to Sheldon Adelson and support for Donald Trump — who writes about the Orlando attack as proof that Obama cannot contend with Islamic terrorism let alone recognize it. The schadenfreude is hard to miss:

Another Islamist terrorist attack in Barack Obama’s America — the same America that decided to wipe the term “Islamist terrorism” from its lexicon. Alas, the terrorists are doing Obama’s job for him. How embarrassing.

Bismuth refers to Israel only in passing when he writes about last week’s attack by Palestinian gunmen, which left four Israelis dead in a central Tel Aviv restaurant:

This is a toilsome war that could last decades. Who knows this better than Israelis? Just a few days ago, in the middle of a popular city market in Tel Aviv, four Israelis were murdered. Yesterday it was 50 Americans. That’s 54 people who wanted to go out and live life, not have their lives cut short.

According to Bismuth, Israel and the United States are fighting a common enemy. The only difference is that unlike “Obama’s America,” Israel is not bogged down by nuisances such as political correctness. Unlike our liberal friends in the United States, we have no issues speaking openly about the problem, and know exactly what it takes to deal with it.

And finally, the image: The decision to publish Melhem’s photo alongside Mateen’s amounts to race-baiting and incitement of the worst kind against a fifth of Israel’s population. As The Seventh Eye’s Shuki Taussig put it, the subtext of the photo isn’t difficult to parse: “The Arabs are murderers, and they live among us.” Apparently the author of the article missed that message, though, because the text never actually mentions Melhem’s Tel Aviv attack at all.

And there’s a reason Bismuth didn’t make the comparison himself. Nearly 100 percent of terrorist attacks in Israel are not carried out by Palestinian citizens, Muslim or otherwise. Over the course of 68 years, terror attacks by Palestinian citizens, or even cases in which they were an accomplice, have been exceedingly rare. Melhem, from the northern village Ar’ara, was known to have a troubled mental history and has sparked no copycat attacks among Israeli citizens. His actions were horrific and deadly, but were shocking mainly as an exception to overwhelming majority of Israel’s Arab citizens.

The photo montage is an accurate depiction of Israel Hayom‘s patron’s worldview. If Netanyahu believes that Israel is besieged by predatory beasts from both within and outside, then there is certainly no reason his newspaper to take a different editorial line. Unfortunately the decision won’t likely cause a ripple outside limited media and political circles, while many Israel Hayom readers, and perhaps even most Israelis, will simply view it as ordinary, normal — and self-evident. The lack of desire to think critically and embrace immutable, almost divine truths is on full display, courtesy of Israel’s prime minister and his foreign backer.

emailemail
Before you go…
A lot of work goes into creating articles like the one you just read. +972 Magazine is nonprofit journalism, owned by many of our writers, editors, and journalists. In order to safeguard that independent voice, we are proud to count you, our readers, as our most important supporters. With your support, we can keep +972 Magazine a strong, independent, and sustainable force helping push the global discourse on Israel/Palestine.
DONATE
More About terrorism