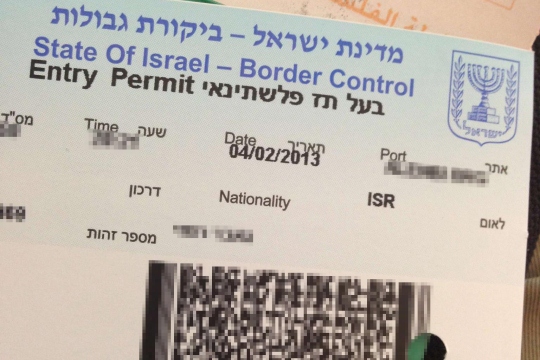 On February 4, 2013, a Palestinian resident of the West Bank received this entry permit when he crossed the Allenby Bridge from Jordan. The big blue letters at the top inform the holder that the State of Israel’s Border Patrol has granted him entry, making it look as though the territory he was entering — Palestine — was actually Israel. Under the blue letters at the top, next to the words “Entry Permit,” the Hebrew words say, “Owner of Palestinian ID card.” But at the lower right, where it says in Hebrew “le’um,” or nationality, the border control typed ISR, for Israeli.

He is not, by the way, an Israeli citizen.

With very rare exceptions, Israeli citizens are not allowed to use Allenby Bridge; they are supposed to use Sheikh Hussein Bridge in northern Israel when they cross between Jordan and Israel, so that they do not traverse the West Bank.

Perhaps the border guard made an error when s/he typed ISR. It’s possible. But if so, it is a very telling mistake. As more and more people talk about Israel and the West Bank becoming a de facto single state, with liberty for some and unequal rights for all, the State of Israel suddenly, without any announcement, changed its procedure for Palestinians crossing Allenby Bridge. Until February 4, Palestinians entering the West Bank from Jordan used a permit issued by the Israeli army. The army also issues these permits to Palestinian applicants wishing to cross one of the checkpoints along the separation barrier. Now Allenby Bridge has become an entry point into what the State of Israel seems to regard as its territory — and its residents, like the man who received this document, are labeled “Israeli,” although they do not have any of the rights of an Israeli citizen. He cannot even visit his family in East Jerusalem; the army will not grant him a permit.

The procedure apparently changed overnight, with no prior announcement.  The person who received the document in the photo crosses the bridge frequently but was given this piece of paper for the first time on Monday crossing. A cousin who crossed on the day before (February 3) said that he did not receive this entry permit, nor did he see any of his fellow travelers receive it that day.