A Swedish tourist trying to enter Israel was made to sign a “contract” promising she won’t get in touch with “pro-Palestinian” organisations, and acknowledging she’ll get deported if she “gets caught doing even one of these things.” Meanwhile, Prime Minister’s Office released a letter that will be handed to deported Flytilla activists: Go to Syria.

Check this out. This is a “contract” that a Swedish citizen was required to sign upon entering Israel via the Eilat land crossing: 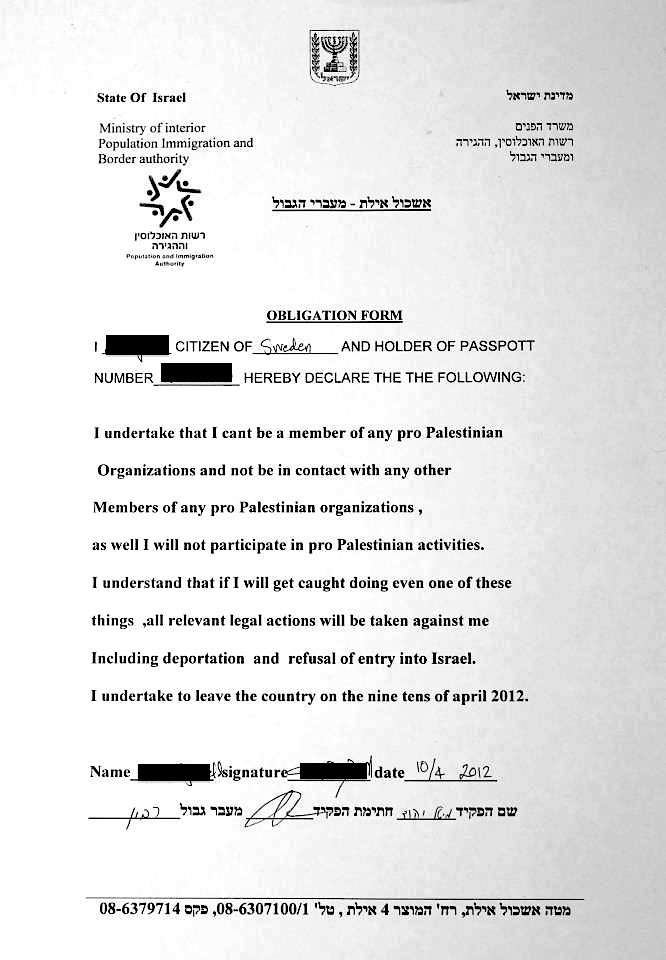 Please, stop snickering at the “nine-tens,” the “passpot,” and the bizarre grammatical construct in the first sentence. This is quite serious. The person in question told +972:

I’ve been in East Jerusalem on and off for six months now, visiting friends. Since I am here on a tourist visa, I have to leave the country every three months and renew my visa at the border. No problem, until this time when me and a friend made an Easter trip to Jordan and planned to get a new visa stamp in my passport on our way back. I’ll go back to Sweden next week again, so I just need a visa for my last days here.

When we got to the Israeli section of the border crossing – that one between Aqaba and Eilat – we were asked to sit down and wait a moment while they kept my passport. Then I was invited into an office and was questioned about my religion, if I had contact with any religious organizations here, what I do during the day, how much money I have got to spend and where I got it, what I do in Sweden and so on. Then we had to wait again, not knowing what would happen. After 4 hours and 20 minutes, I was asked to sign this contract and got back my passport with visa stamp in which the expiration date (normally three months later) was corrected to April 19, which is when I have my plane ticket home. Then we could finally enter Israel again.

They retained the original “contract” at the border control, and mine is only a copy. I don’t know what consequences I could expect if I would break it. Personally, I am pleased that I was let in and can spend one last week in Jerusalem. I am five months pregnant and hardly look like any security risk. As far as I know, I haven’t done anything illegal during my stay here.

When reached for comment by my colleague Haggai Matar, Population and Immigration Authority spokeswoman Sabine Haddad said : “The purpose behind the document was to make sure the lady doesn’t visit friction areas. Nevertheless, we intend to check the issue and the document itself.”

Considering the inane phrasing, spelling errors and the fact the entire letter was custom-printed for the woman personally (as opposed to a form where her departure date would have been written in), I’ll go on to venture a highly charitable guess this is the local initiative of staff at this particular crossing, rather than a policy. The initiative might actually belong to the very same “Meital Yahud”, who appears as the other signatory to the contract and might be anxious to have an alibi (a rather weak one, mind you) in case the person she let in goes on to do something as dangerous, as, um, speak the word “Palestine”, or something. It’s still morbidly fascinating to see the Flytilla getting our authorities to make themselves look like complete buffoons even before a single activist actually boarded a plane.

Update 18:30 And as if to vindicate that last sentence, Netanyahu’s spokesman Ofir Gendelman tweeted the official letter Flytilla activists will be handed on arrival.  The grammar is a little better. The content – judge for yourselves. 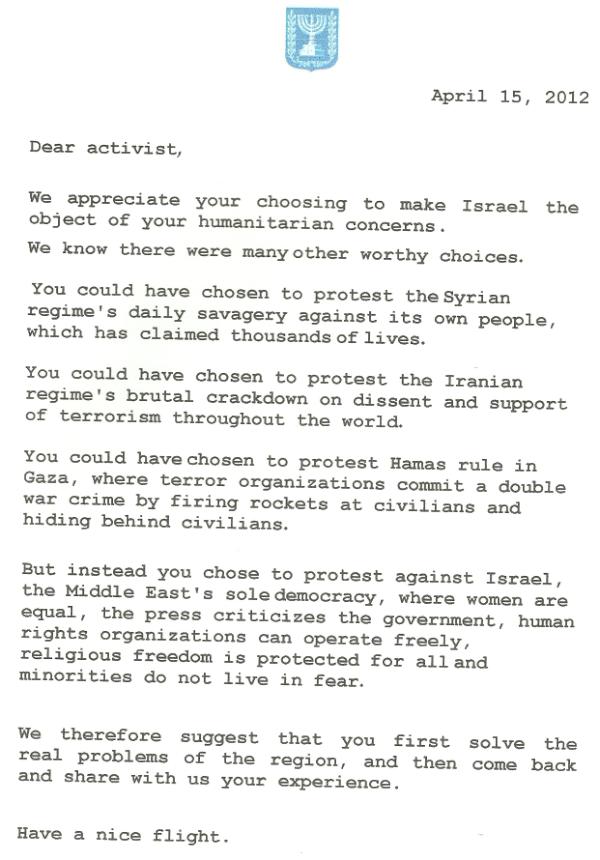 “This is the first time I have seen such a form but as someone who deals with the Ministry Of Interior on a daily basis, nothing can surprise me anymore. Legally, she is very fortunate that it is written so badly. If she “cannot” be a member of a pro-Palestinian organization then I guess she is not…”

As for the question of responsibility, Elam suggests:

Anyway, at least they didn’t summarily execute the visitor’s laptop this time. Things are looking up.