Israel is about to begin issuing its citizens with “smart” ID cards – plastic cards with a chip containing various biometric information, as opposed to the laminated paper cards we carried until now. The debate over the biometric database on which these cards will draw is long and ferocious, but it turns out this is only one controversial thing about the cards. Yedioth Ahronoth reported today (h/t 7th Eye) that the serial numbers of the cards (as opposed to the actual ID numbers, which will remain the same), will begin “at six million up, to commemorate the six million Jews murdered in the Holocaust… the new cards will be embedded with six Stars of David, also to commemorate Holocaust victims.”

Three thoughts that come to mind:

1. Not only do we appoint ourselves to representing all living Jews of the world (and then are shocked when non-Israeli Jews are targeted by opponents of the Israeli state), but we now have appointed ourselves to represent the dead ones – not as a group but each and every one, individually. What’s next? Serial Interior Ministry numbers on Jewish headstones in cemeteries around the world?

2. It’s profoundly disrespectful to the Holocaust victims themselves, many if not most of whom weren’t Zionist and saw themselves as Jews and as nationals of their own country.

3. The same ID cards will be given to Jews and Arabs in Israel, which makes the entire shennanigan appear as if the state officially says that the 6 million murdered Jews who never set foot in Israel (certainly never acquired residency or citizenship) were here /before/ the Arab citizens who were born here.

Commemoration of the Holocaust and learning form it is tremendously important. But is the long-term plan here to turn the entire country into Yad Vashem and all citizens into walking exhibits?

Update: Here’s a scan of the original report, courtesy of Yo Gonen. 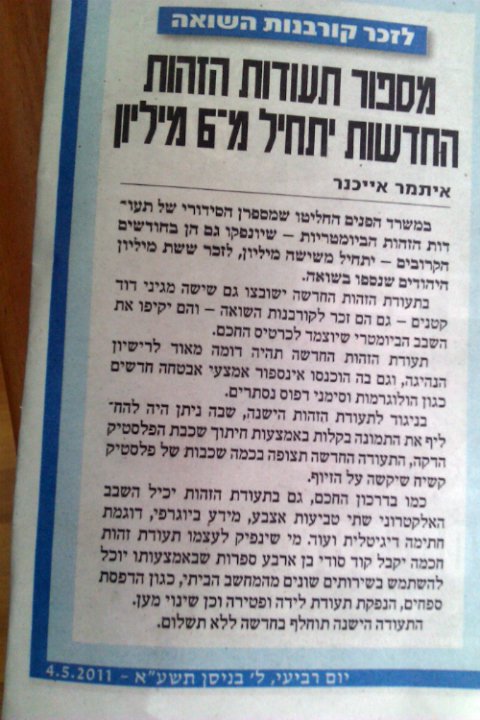