Ten Palestinians were killed today (Thursday) – nine of which were children – and dozens more injured when a bus crashed into a truck on the road between Qalandiya and the Adam settlement, near the northern border between Jerusalem and the West Bank.

The bus – which was carrying kids from the “Nour Al-Huda” kindergarten in the Shuafat refugee camp (East Jerusalem) on their way for a day of fun in Ramallah – collided with a truck, rolled over and burst into flames. The reasons for the collision have not been determined yet.

While no one can deny that this is truly a tragedy, some found their inner-racist and it guided them through this impossible task.

The tragic story was covered by a lot of Israeli news websites, which all have comment pages (called talkbacks in Hebrew) open for readers to comment on articles. Most of these websites also have a Facebook page where they share their news and readers – who are identified by their profiles – are able to openly comment on them.

One of these websites is “Walla News” which posted a report about the accident on its Facebook page. Most of the readers were shocked and horrified by the fact that children were killed, but a bunch of them were not as horrified when they found out who the victims were. Take a look: 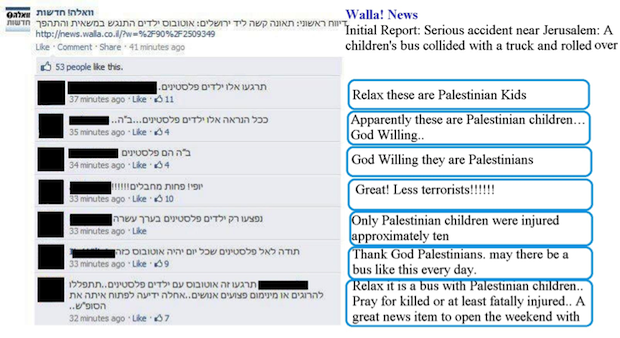 It is important to point out that there were a lot of readers who condemned these and other racist comments.

This is not an attempt to bash any individual. My only intention is to show an example of the consequences of continuous occupation, which is affecting Israeli society as well as Palestinian society.

Moreover, there cannot be any doubt that these individuals feel comfortable openly expressing their hateful and racist opinions in a public domain mainly because discriminatory political discourse has legitimized this type of expression.

In my view, these comments should cause concern to Israelis more than Palestinians. Once hateful speech becomes legitimate, even if not explicitly, it tend to seep inwards, and in a divided and fragmented society – which is clearly the case in Israel – the risk is even greater.

Fady Khoury is a legal intern at Adalah: The Legal Center for Arab Minority Rights in Israel. The views expressed in this article are those of the author and not Adalah.