+972’s daily media roundup:  Jerusalem police believes that a Jewish gang is responsible for the attacks on Arabs that occurred in Jerusalem recently; Mutiny within Labor against Defense Minister Ehud Barak continues; F-16 crashes during a training mission, two pilots are dead. 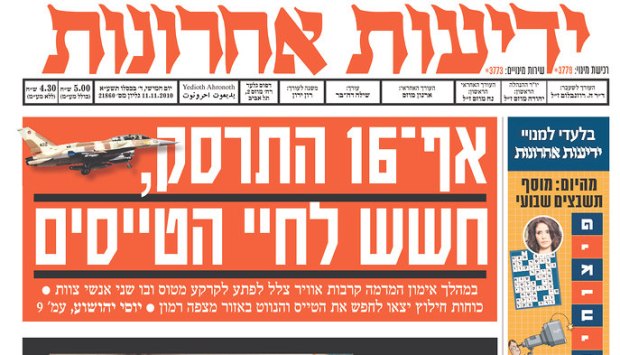 All three tabloids have the same couple of stories on their front pages: the crash of an Israeli F-16 jet fighter during a training mission in the south; and the murder of two girls by their mother in a Tel Aviv suburb. The F-16 crash occurred very late and at the time it wasn’t known if the pilot survived. Their bodies were found today.

Haaretz opens with an investigative piece about retired army officer Boaz Harpaz, suspect of forging a document and leaking it to the press in an unsuccessful attempt to prevent the appointment of Yoav Galant as the IDF’s new chief of staff. Harpaz is a proxy to the current chief of staff Gabi Ashkenazi, who became a bitter rival of Defense Minister Ehud Barak.

Haartez has a story about a gang of racist Jews suspected of assaulting Arabs in downtown Jerusalem. According to the police, the group is relate to a couple of attacks on Arabs and one more on a Chilean tourist, who was mistaken for an Arab. Haaretz mentions another attack that could be related to the same case, in which an Arab was stabbed.

The real nugget of the item comes at the end: it is a comment by Israel’s ambassador to Santiago, David Dadon, regarding the attack on the Chileans tourist and the publicity it got:

“The incident has been blown up here out of all proportion also by members of parliament of Palestinian extraction who took advantage of it to accuse Israel of racism after it was reported that he might have been attacked because of his Arab appearance,” Dadon told Haaretz yesterday. “Following our swift and tough response, the matter was immediately removed from the media’s agenda.”

Attacks on Palestinians in Israeli cities are becoming more and more frequent. In this post you can see a security camera video of a group assault on an Arab by-passer by Jewish soccer fans.

> Yisrael Hayom declares that PM Netanyahu’s meeting with Secretary of State Clinton today will show “whether the crisis with Washington is real or made-up”.

> Hostile administration? The US is refilling Israel’s emergency military supply.

> An op-ed on Israel Hayom by Avenr Cohen, the Israeli-American nuclear historian, calls Israel to rethink its policy of nuclear opacity. Dan Margalit, the paper’s reporter who last week encouraged Israel’s security services “to deal with Cohen” answers in an article that any policy change would hurt Israel’s strategic interests.

> Labor officials going after Ehud Barak: Minister Avishay Braverman (Labor) calls for his party “to challenge the government,” Another minister, Yitzhak Herzog, initiated a party process that can lead to new primaries for the party’s leadership.

The Hebrew newspaper roundup is written by +972 contributers and posted six days a week . For previous roundups, click here.