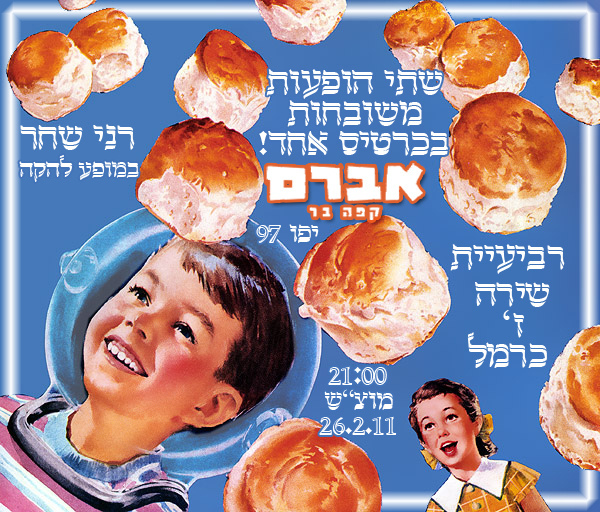 Wednesday began with a meeting. I came down to one of Tel-Aviv’s steel and glass towers to meet one of Ethel Merman’s favourite people, the show people who are in show business. More specifically, I stopped by the office of a talented music promoter to see what could be done to promote my music.

“I’m performing a lot these days” I told her. “tonight, for example, I’ll be opening for Shira Z. Carmel in Jerusalem. I’ve only heard her play once before, but she’s really great.”

“I think I’ve heard of her,” said the promoter, in a tone that left no room for doubt, she’s never heard of her.

“You really ought to hear her stuff,” I said, “Come to Jerusalem!” It’s funny, the things we say in conversations, knowing we are saying nothing. “Let’s have lunch sometime”, one suit would say to another at a boring function, both of them knowing the lunch will forever remain pressed within a never unfolded menu.

“Ahh, to much stuff to do around here,” said the promoter. 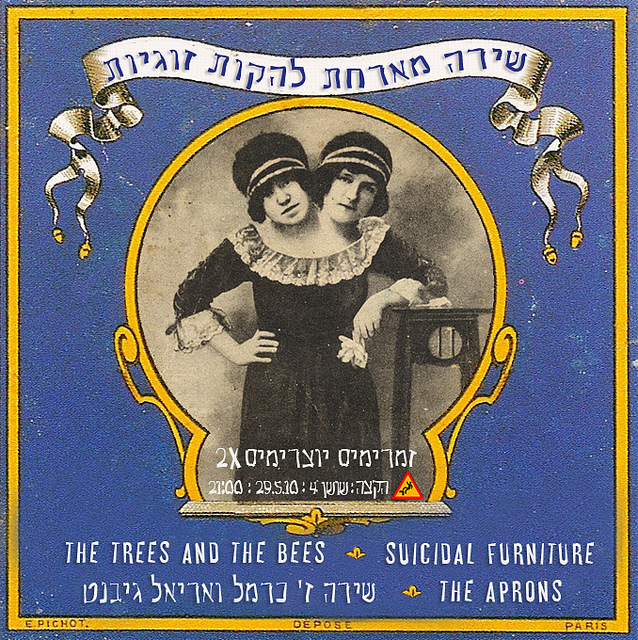 And that was that, there is simply no way to draw anyone in the Tel-Aviv music business across the 38-mile-wide-invisible-ravine that separates the two cities, even when the act awaiting them on the other side is likely the best musical act in Israel today.

I’m not writing such words about the Shira Z. Carmel Quartet because Shira is a friend of mine. She can’t really be called one. I know hardly anything about her and only ever met her thrice in my entire life. The first time was when I came to be hosted on one of her singer-songwriter nights at “Hakatze” (previously Jerusalem’s wonderful gay club and drag paradise “The Shooshan”). She played an acoustic guitar there, producing soulful, intelligent, edgy folk which I loved.

The second time we met, she walked past my cafe table in Tel-Aviv, recognized me and asked if I would open for her act. The third was Wednesday’s performance, which happened to be the best performance I’ve witnessed on this soil. The previous record belonged to breathtaking Marina Maximilian Blumin‘s tour de force performance at the Eilat Jazz festival, two years ago. Wednesday, Shira beat Marina to the ground.

There’s a lot to say about what went on onstage. Michael Glucksman played a fantastic red guitar. Ariel Givant played the double bass, an increasingly popular instrument with pop and rock artists in Israel. Marco Milevsky was the Jazzy drummer. The evening’s poster betrays nothing of what they really look like, but does say something about them. 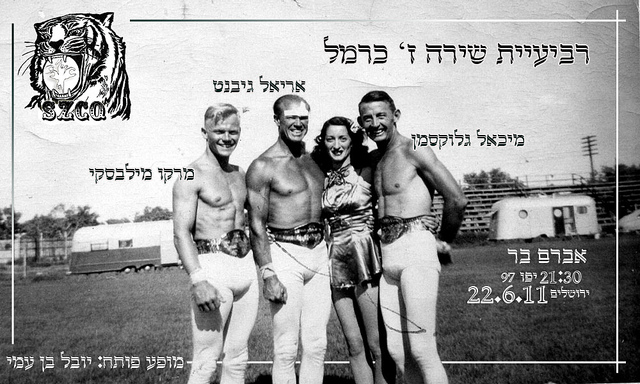 Carmel herself, in a daring yet old fashioned black dress befitting a naughty widow, sporting what would be her staple dark curls had she been famous enough to have her curls be a staple, sang and played the guitar and the triangle. Next to me, at the bar, stood Jeruslemite graphic artist and web designer Gilli Stern. He was awed: “I’ve never seen anyone play the triangle other than as a joke,” he said.

This was no joke. Music is difficult to describe in words, even if one resorts to references and comparisons. one could theoretically say that Carmel’s quartet hovers somewhere in the middle of a dodecahedron, whose faces include Tom Waits (in terms of presentation) Hava Alberstein (in terms of vocal intensity and folkish nuances) Frederick Chopin (in terms of musical mystery) Kurt Weill (in terms of elegant grit) the Soft Machine (in terms of Jazzy texture) Jolie Holland (in terms of folk-meeting-jazz and of hauntingness) Regina Spector (in terms of playfulness) and, say, the Pixies (in terms of rock-age liberty), but that would be to say nothing about it.

It must be listened to, and while the band does travel – to festivals and to choice venues on the coast, it really must be listened to in Jerusalem. My girlfriend Ruthie was taken by the sight of city buses past the Avram’s window, right behind the stage where this wonder was taking place, close enough to seemingly be brushing Carmel’s shoulders. “I just love that,” she said, “city buses, all lit up on the inside. Look, Here’s another one.”

Please don’t think her weird. Had you been there, you’d know exactly what she meant. Another captivating sight visible through the cafe’s window was that of yeshiva students by the score, who for some reason walked up and down the street in their white shirts, carrying cases of large wind instruments. The urbanity and surrealism of the music we heard came alive in the background, unsolicited. 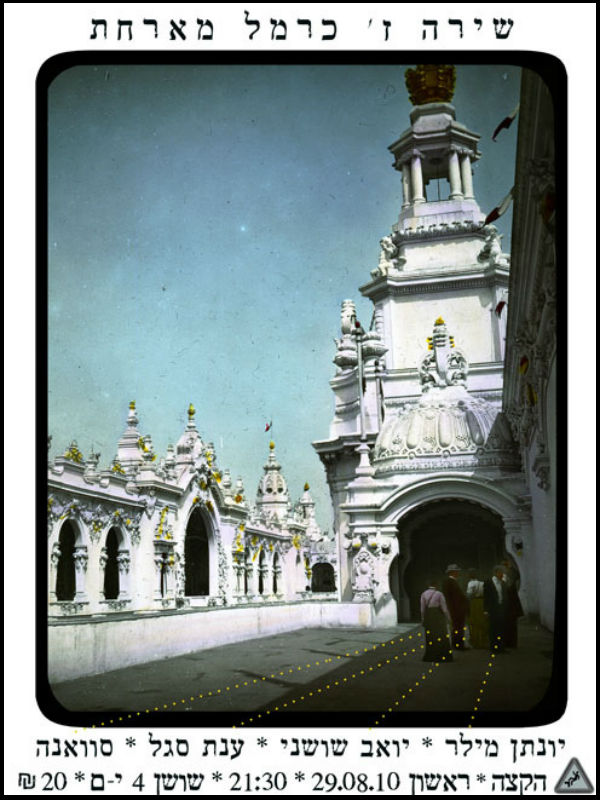 “I can’t believe this show is for real,” said Stern, “I’m sitting here with goosbumps for for an hour already.” 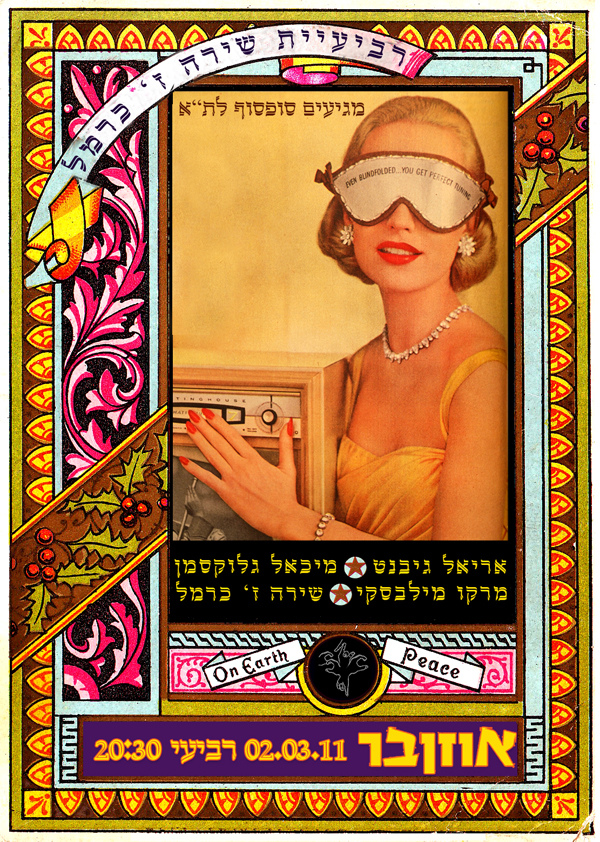 As for myself, I thought of the line concluding the first canto of the Tao Te Ching: “Darkness within darkness, the gateway to all mystery.” With the exception of Israeli cinema, which is going strong worldwide, much of the truly incredible culture being produced here is a secret from the wrold, even when, as in the case of many of Carmel’s songs, it makes use of the English language.

West Jerusalem’s creative scene is a secret within a secret. Many of the major art schools are situated in the city, making it a breeding ground of young talent. Carmel herself, for one, rears from the Rubin musical academy, part of the Hebrew University.

This is where it’s at. Jerusalem is the true home of Israel’s punk scene (The Top Hat Carriers, by far the most groundbreaking Israeli rock band to have emerged since the early eighties, emerged here). It’s the home of fine Hebrew Hip Hop (recall Hadag Nahash, who are responsible for this ditty contrasting Jerusalem and Tel-Aviv), yet even an authenticly driven indie agent would rarely take the trouble to come and listen. Over-hyped Tel-Aviv is simply too much into itself. 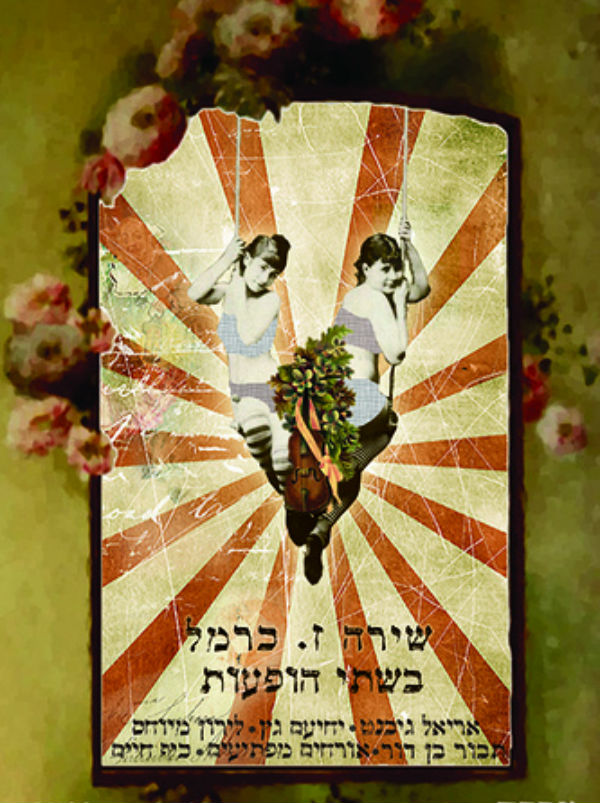 Consequently, the Shira Z. Carmel Quartet has to resort to online busking in order to save up for making an album. The following clip provides only a narrow sample of what they’ve got, but it’s fun and it’s about as weird as their posters, with which this post is decorated, and which were all designed by Carmel herself. Most importantly, it provides an opportunity to support this striking, emerging act, albeit without the pleasure of witnessing buses passing in the background.
.
[youtube]http://www.youtube.com/watch?v=bn7jCojc80M[/youtube]