If anything, satire in our society runs the risk of being too safe, of making its targets appear less dangerous than they really are. In cutting them down to size, satire sometimes humanizes as much as it disparages. 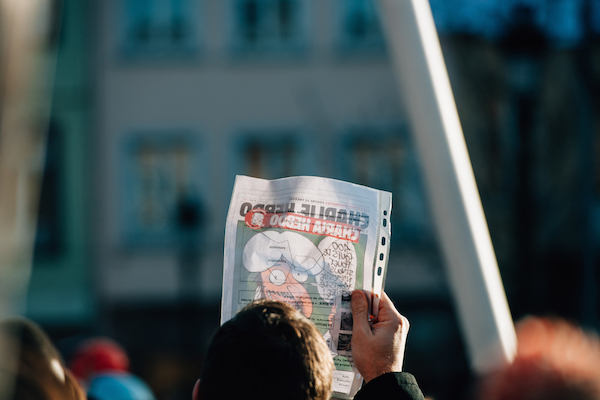 This week 17 French citizens were murdered because some people literally can’t take a joke. Artists were martyred for mocking Islam and Islamic extremists, police lost their lives because they were charged with protecting those artists’ right to free speech, and Jews were slain because they were Jews.

A joke, for or an instant, inverts the way we look at the world and defies our expectation. Satire is by definition subversive, making us aware of the inherent contradictions in any social system or in our own conflicted personalities. Humor is the individual’s ultimate weapon to resist social conformity, which is why tyrants and rigid ideologues always find it so threatening. It cannot be controlled.

All these people lost their lives because their murderers do not believe that human beings are capable of of holding two possibly contradictory ideas in their mind at once – which is the essence of all humor.

These killers are the vile vanguard of fanatics not spiritually sophisticated enough to understand that the sacred and the profane are inextricably intertwined, or that anything that is genuinely holy is resilient enough to survive derision, even of the most profane kind. They are not able to understand the West, where a person may laugh at his own belief system, recognize its inconsistencies and still embrace it.

The Kouachi brothers and their accomplices were simpleminded butchers who wanted the rest of us to become simpleminded lackeys. They could not tolerate the complexity of life, of the real world, of people who do not submit as they did to an unforgiving and inhuman credo.

Satire is used to diminish and belittle the objects of its mockery, to expose their lies and hypocrisy and reveal their flaws. Islamic extremists are hardly the first to find mockery a sufficient justification for a death sentence. The most criminal regimes in human history, Nazi Germany, Stalinist Russia and Maoist China, were notoriously humorless and did not suffer public satire. Nor did the church or most monarchies for much of history. Kim Jong Un and Vladimir Putin are only the latest in a long list of dictators and tyrants to punish those who lampoon their follies.

Satire is deployed to sting, to attack, to infuriate. Or to survive; a Jew at a café in 1930s Berlin tears hair out as he reads the Jewish paper, when he spies his friend reading the Nazi paper, Der Sturmer. Outraged he asks him, “How can you read that hateful rag?” And his friend answers, “In your newspaper, Jews are losing their jobs, getting arrested and beaten up in the streets. In my newspaper, we are wealthy and powerful and control the world.”

When we enjoy satire, we feel momentary power over political or religious leaders, social institutions or commercial culture, and feel slightly more independent of their ability to impact or control our lives.

For those of us weaned on Mad Magazine, George Carlin, National Lampoon, Saturday Night Live, Doonesbury, Seinfeld and the Simpsons, mocking sacred cows is mother’s milk, part of our essential being. The parodic or self-mocking worldview, is as deeply rooted in our psyche as the value systems and institutions we jeer at.

Comedy in our culture is mainstream, not marginal; we expect our YouTube and sitcoms to make us laugh on demand in a way that is unprecedented in human history. When we are exposed to satire that is genuinely angry, unsafe, that is willing to provoke disgust to make it’s point, we don’t digest it with our usual facility.

We reward the megastar comedians of our global culture, even if they are animated characters painted yellow with purple hair.

The subversive essence of humor is hardly a basis for creating a stable society or building a strong community. But that is exactly our challenge; to embrace human contradiction and keep perspective on our own limited significance in the cosmic scheme of things, to poke holes in our social order while acknowledging our human need to belong to a social order.

If I have to choose between the Simpsons or the religious order of thugs, I will champion Bart and Lisa knowing that they are infinitely more human, profound and true. If the 20th century taught us nothing else, it proved time and again that those who seek purity in human affairs are choosing death over life.

If anything, satire in our society runs the risk of being too safe, of making its targets appear less dangerous than they really are. In cutting them down to size, satire sometimes humanizes as much as it disparages. If I can laugh at something or someone then it feels like it or they can’t hurt me; at least not directly, at least, not physically, which in an open and free society, is usually the case. I may be motivated to scoff rather than take action.

Charlie Hebdo are guerilla cartoonists specializing in unsafe satire; they use comics to make their readers laugh but also to provoke, to disgust, to insult, to incite strange thoughts, to jar us from our comfort zone.

But if another ridicules your beliefs, you have the choice to challenge them in the marketplace of ideas, to turn away or turn the channel, to refute their claims, or if the offense is considered intolerable, to seek recourse in a court of law.

Contemporary western culture, with all its confusion and self absorption, has the wisdom to accord humor a central place in our pantheon. The murderers of artists, police officers and Jews in France aspired to impose a humorless regime on as many people as they can. And while we should mock them, it is time for everyone in the West to stop treating them like a joke.

Don Futterman is the Program Director for Israel of the Moriah Fund, a private foundation which works to strengthen Israel’s civil society. (The Moriah Fund supports +972.) He can be heard every week on the Promised Podcast, a discussion of new Israeli politics and society.