The Israeli justice system – from its inaccessible police stations to its lenient prosecutors, from its negligent investigators to its judges who won’t convict – makes it clear to the Palestinians that there is simply no point in lodging complaints. 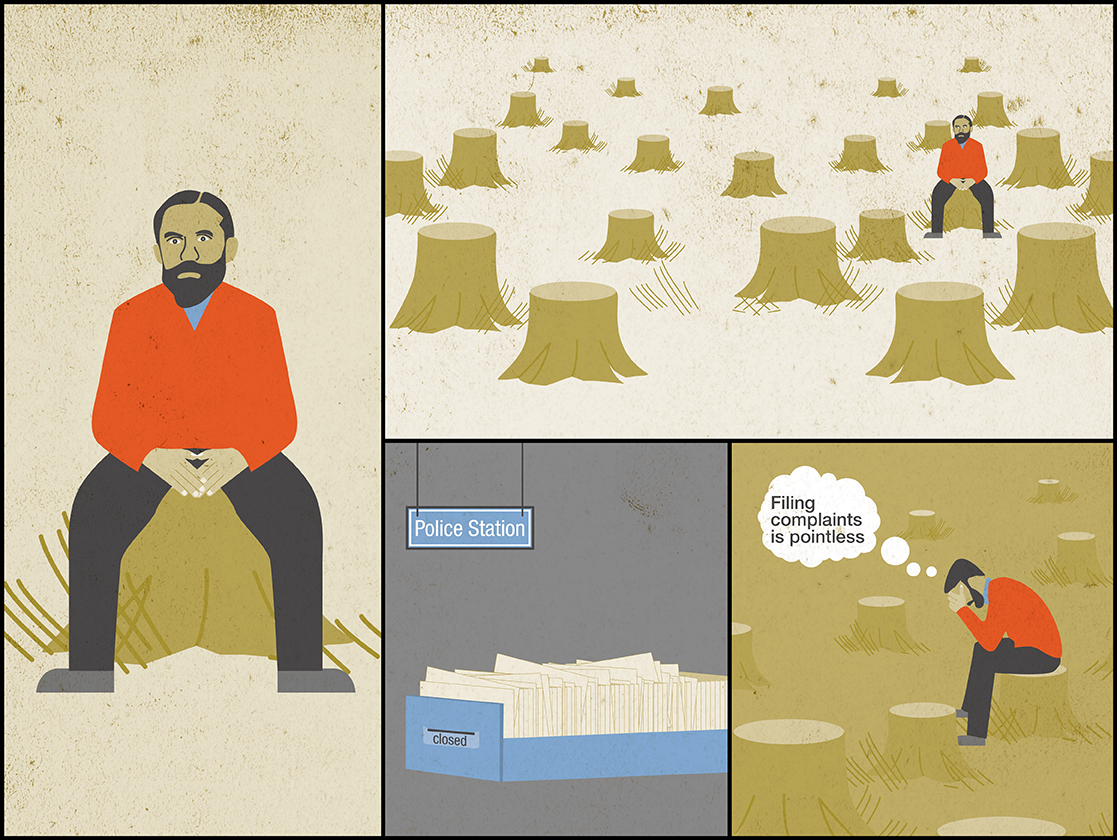 “The spectrum of possible reasons for the lack of complaints may range from acceptance of the fact and a natural inclination not to complain, to disinclination to come in contact with the authorities, to fear resulting from a threat or concern of retribution, to reaching the conclusions from the lack of results in earlier complaints to the police, or the refusal of the police to deal with complaints”.

These words were spot-on when they were written in the Karp Report, presented to the Attorney General in May 1982. Back then the report broke new ground on the issue of the lack of law enforcement in the West Bank, and are even truer today, after 30 years of distrust in the Israeli law enforcement system.

Yesh Din recently published a new report, Mock Enforcement, which describes the state of law enforcement in the West Bank based on the data collected over the 10 years of the organization’s activity. The increasing refusal by Palestinians to complain to Israel Police about offenses against them should be one of the phenomena that Israeli decision-makers.

Yesh Din began focusing on documenting this phenomenon in 2013, so as to get a better understanding of the circumstances surrounding victims’ refusal to complain to the police. The organization decided to do so after a long series of meetings with victims, who made it clear to that they would not complain. The victims kept repeating was an Arab proverb: “When the judge is your enemy, to whom shall you complain?”

Between January 2013 and November 2014, Yesh Din documented 282 violations against Palestinians. In 66 cases (23 percent) members of Yesh Din were expressly told by the victims that they did not wish to lodge a complaint with the police.

There are several reasons for this. The first is that the victims are right: filing a complaint is a waste of their time. According to Yesh Din’s latest data, the chances of the police getting someone indicted as a result of a complaint by a Palestinian stands at a mere 7.4 percent. But even if the police succeeded in doing its job and a suspect was indicted, the chances of a conviction would be slim. Ultimately, the chance that a complaint by a Palestinian victim to the police will result in a conviction is only 1.8 percent.

In order to even shake the dice and bet on this trifling chance, the complainant has to come to a police station and lodge a complaint. This is always time-consuming, and sometimes the complainant requires a police escort when the police station is located inside a settlement. Even if he/she makes it to the station, in many cases the Palestinian would find out that his/her testimony could not be taken, as there was no Arabic-speaking policeman present. This would require repeating the entire process.

Secondly, in a series of documented cases, the police investigators humiliated the complainants, mocked them, made it clear to them there was no point in the process (“Do you think a complaint will restore your rights?“), or even hinted that they themselves were in fact responsible for the violations they complained about.

And if this weren’t enough, about a quarter of victims who refused to lodge complaints pointed to a more serious problem: they had already been victimized before, lodged complaints and felt that nothing had changed. At least one person, Farrah Abad of Jaloud, told Yesh Din that following the complaints he made, violence against him only intensified. “Now our little children live under mental duress, I have no faith in the Israeli system. I reached this conclusion after many complaints that yielded no results.”

The feeling that there is no point in complaining is very prevalent, and the Israeli authorities do not do enough to combat it. It should be noted that according to our latest data, despite all the talk of an uncompromising fight against ideological crime, at the end of the day 25 percent of the ideological criminals – of the minority that is brought to court in the first place – are not convicted. The court finds them guilty without conviction; that is, it refrains from placing them under the onus of a criminal conviction. This is a relatively rare procedure, intended to prevent a person who made a misstep from paying the full price.

In the Israeli magistrate courts the rate of finding a person guilty without conviction is 5.3 percent; in the district courts, it is just 1.2 percent. That is, when it comes to ideological criminals, the justice system is not exactly Justitia, the goddess of justice  armed with the sword, as it would like us to imagine. It is more like an angel of mercy from 19th century art.

The Israeli justice system – from its inaccessible police stations to its lenient prosecutors, from its negligent investigators to its judges who won’t convict – makes it clear to the Palestinians that there is simply no point. That all the efforts and the risks they take leave them with nothing but a laughable chance at justice.

The result of Palestinian lack of trust in the justice system is a whole wave of ideological criminality, which the system is unaware of. If it cared about its duty, one would assume that the justice system would be concerned about the 23 percent of unreported attacks. However, more than 30 years after the Karp Report, it is very hard to believe it actually cares.