In the northern city of Haifa, Israeli police are arresting activists who are organizing demonstrations against the violence in Gaza. 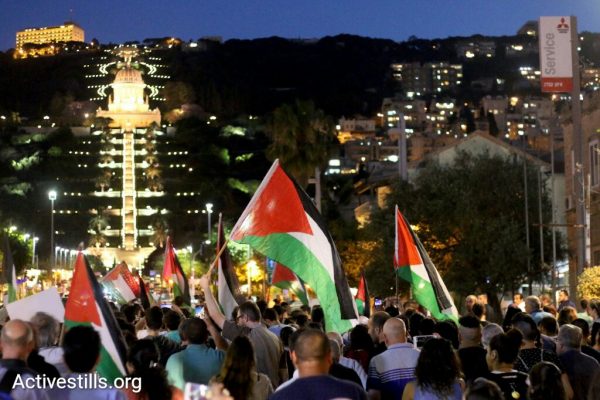 Israeli police arrested and interrogated a number of Palestinian and Jewish political activists from the northern city of Haifa over the past several days, due to their participation in demonstrations following the killing of over 60 protesters in Gaza this past week. Among those arrested were General Secretary of Hadash’s Haifa chapter, Raja Zaatry, and Yoav Bar, an activist with the Abnaa al-Balad movement, who was arrested twice.

“On Monday evening, we held a protest. The harassment began the following day. I believe it has to do with the upcoming local elections. There is a Facebook group for Haifa’s residents, which has both Arab and Jewish members, and which is run by a right winger. Often you will see absurd conversations taking place there — Jews sending Arabs to Gaza, Arabs sending Jews to Europe. But it may be the only space in the country that is shared by Jews and Arabs of all political stripes. After Monday’s demonstration, some group members began putting pressure on the mayor. Someone wrote: ‘Why are you letting them protest?’ They probably felt that they had to do something.”

On Tuesday morning, the police began arriving at people’s homes. Most people were at work, so they caught only Yoav, who has more flexible work hours. I know of five activists who were paid a visit, both Jews and Arabs. The police came to their homes, some family members received frightening phone calls. I assume that there were others whom I don’t know about.”

On Tuesday we had another protest, and the police jumped on anyone who did not stand on the sidewalk, specifically on photographers who were documenting the demonstration. The police yelled ‘get on the sidewalk!’ hysterically at them, even though they were neither on the road nor blocking traffic.”

Majd Kayyal, a journalist and political activist who was also at the protest says that in the eyes of the police, the fact that an Arab stepped onto the road for five minutes is “the most catastrophic thing that can happen.”

“I think it is legitimate and legal, and shouldn’t worry the police,” Kayyal adds, “but they cannot understand and accept that there are people who protest without their permission, without taking orders of where to stand or not stand.” 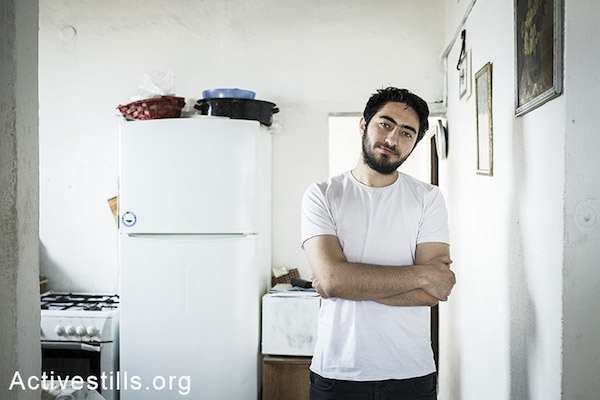 “The fact that the protests took place in downtown Haifa is no coincidence. This is the same place where Arab residents were kicked out of so it could be turned into a recreational area with bars. Since 2013, there has been an increase in the mistreatment of political activists – in terms of numbers arrested, release conditions, preventative arrests, etc.”

“Ultimately, this is foolish behavior. They do not have the tools to influence us. They still believe that arresting three or four organizers will stop people from going into the streets, as if they are puppets. They are unable to understand that we have a political demand. They won’t be able to stop that.”

‘Open up or we’ll tase you’

Yoav Bar himself described both his arrests on his blog [Hebrew]:

I was harassed twice this week, both times with false arrests – and all in violation of the law. The reason: the police’s efforts to prevent the protests that took place in Haifa against the massacre of protesters in Gaza.

How does one make an arrest without a warrant?

On Monday morning I heard loud knocks on the iron gate outside my house, along with yelling: ‘Yoav! Yoav!’

I was still in my pajamas, reading in bed. For a second I thought someone was drowning at the entrance of my home and calling for my help. I weighed getting dressed before helping him? On second thought, I remembered that I live in the Halisa neighborhood, and that the road is covered in asphalt, and that it rained not too long ago. And anyway, anyone who is drowning right now wouldn’t be able to strike the iron gate. I relaxed and continued reading.

The iron gate, two meters high, was locked. The yelling and knocking were suddenly at my front door, and from there the doors to the rooms inside the house, as well as the windows. The person yelling did not suffice calling out my name, he created some kind of background music with an improvised instrument that he put together from things he found in the yard.

After the commotion died down and the guests left, I calmly got up and began going about my day. However, immediately after I opened the gate and walked out into the street, I saw four figures running toward me. I was able to go back into the yard and lock the gate before they stood before the gate and yelled at me to open up. Now, face to face, I could see that they were police officers, two men and two women, with uniforms and name tags.

“Yes!” they responded. I asked to see the warrant, but they did not show me a thing. Instead they yelled: “Open immediately or we will tase you.”

Because they had already pointed the taser at me, I did not want to test their patience. I opened the gate and went with them.

At the station, I was told that I am not under arrest but detained for the purposes of investigation. When I complained that they lied to me and detained me without a warrant, they continued lying: ‘We did not say you were under arrest, nor did we say we had a warrant.’

After the long wait, the interrogation itself was short, and ended when they told me that I would be released as long as I agree to three days in house arrest. I tried to refuse, but then was told I would be sent to Jalma prison and then would be brought before a judge who would determine the conditions of my release. I agreed to house arrest.

On Wednesday evening, while under house arrest, a police officer in uniform appeared at the iron gate and announced that I was under arrest. I went with him.

When I exited the police car outside the station, the officer told me that since I was under arrest, he would have to handcuff me, including my legs. I slowly walked through the station’s long hallways, the cuffs hurting my legs with every movement. The officer tried to convince me to walk faster – yet I refused.

I was led to a room where the officer began filling out arrest forms. There was a problem. He called a number of other officers and explained that he needs to fill out the forms, but he does not know the reason for the arrest. He explains to one of his superiors that he arrested me because he was alone on shift, and that his partner was keeping an eye on another person under arrest. Eventually, one of the officers came up with a cause for arrest: ‘Write that he behaved in a way that could disrupt the public order.’

When that was complete, we set out for another long journey in the hallways, toward the intelligence branch. Now, in order to speed up the process, it turned out that I could march without the cuffs.

The officer at police intelligence read me a short text that he prepared ahead of time, according to which Israel Police received a tip about an illegal protest that is being planned for Friday. He warned me that if I would be interrogated again should I take part.

It turns out that between Thursday night and Friday, the police prepared a long list of political activists who may protest on Friday, and arrested or summoned many of them for similar conversations.

One of those activists, Raja Zaatry, described how the police officers came to his home after midnight, arrested him, took him to the police station, and claimed that he was organizing an “illegal demonstration on Sunday. If he goes to the protest, they said, he would be arrested immediately. Zaatry says that the response to the scaremongering is to make sure that the protest on Sunday is as big as possible. We cannot let fascism pass, the protest must be against what is happening in Gaza, as well as against the attempts to frighten and silence us.” 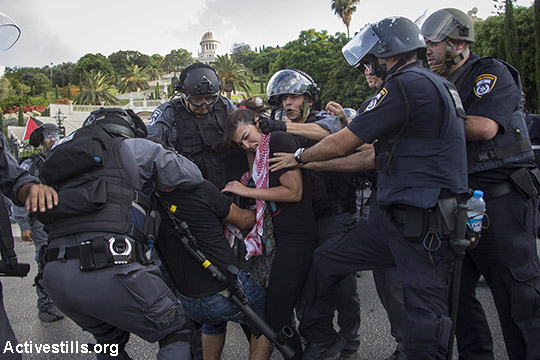 The police issued the following response:

Israel Police acts in accordance with the law in order to protect public safety and security, and whenever there is a suspicion that extremist elements intend to organize illegal and violent protests, the police acts accordingly to prevent it, including by locating the organizers who are hiding from the law.

The police will continue to allow the public to exercise the right to protest and freedom of expression, but will prevent any attempt to disrupt public order and endanger public peace and security.

Furthermore, we do not disclose details from ongoing investigations and emphasize that the stated arrest is unknown and did not take place in our district.

email
Before you go…
A lot of work goes into creating articles like the one you just read. +972 Magazine is nonprofit journalism, owned by many of our writers, editors, and journalists. In order to safeguard that independent voice, we are proud to count you, our readers, as our most important supporters. With your support, we can keep +972 Magazine a strong, independent, and sustainable force helping push the global discourse on Israel/Palestine.
DONATE
More About Haifa 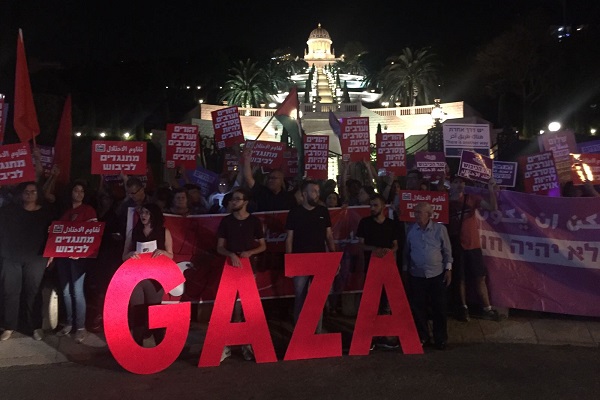 In Haifa, a display of Palestinian grassroots power
The combined efforts of Palestinians in using their bodies, cameras, and voices to support detained protesters made it impossible for the police to hide the severity of their actions. The release of 19 Palestinian citizens of Israel on Monday, who had been arrested since Friday, after police violently dispersed a demonstration in Haifa against last…
By Amjad Iraqi May 21, 2018 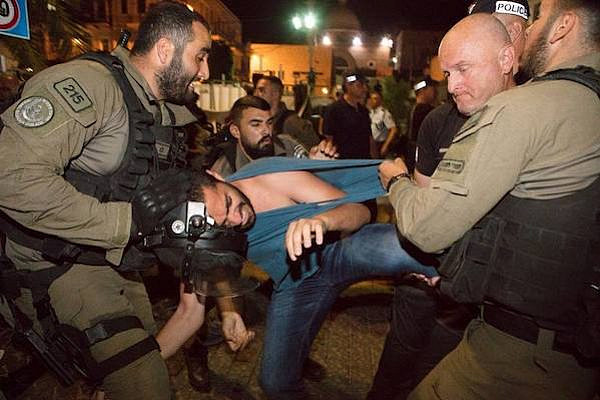 ‘Police broke my knee, threatened my doctors,’ Arab civil society leader tells court
Seven require medical treatment for injuries sustained during their arrests or while in custody, including Jafar Farah, who says an officer broke his knee inside the police station. Police file criminal complaint against Arab MK Ayman Odeh for calling the officers who refused to let him visit a hospitalized protester ‘losers’. By Oren Ziv, Yael…
By Oren Ziv May 21, 2018