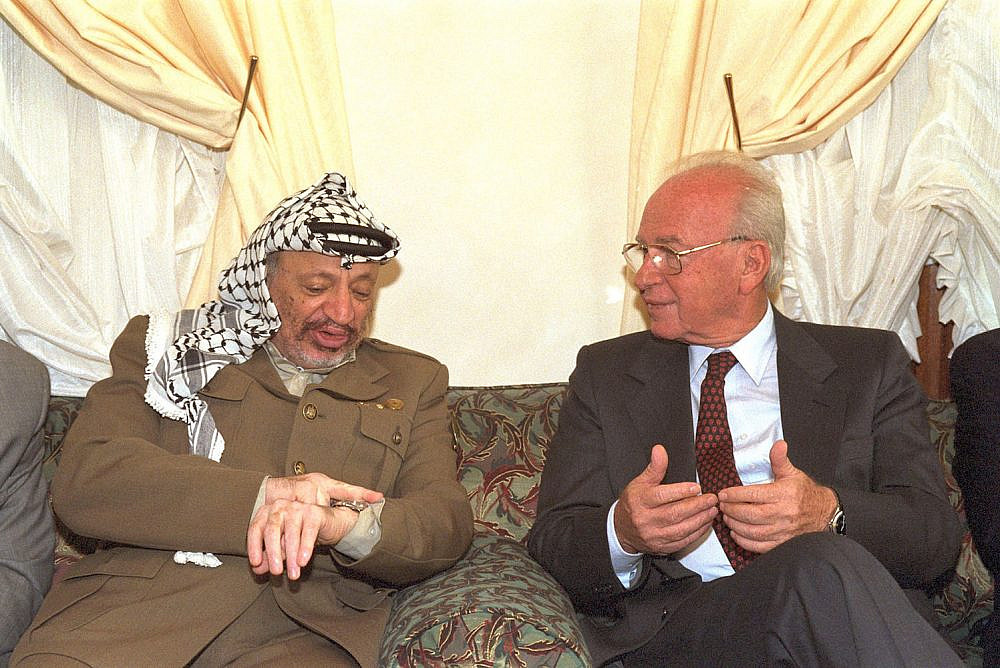 Parts of the American left have been reassessing the legacy of Israeli Prime Minister Yitzhak Rabin in the past week, following Congresswoman Alexandria Ocasio-Cortez’s decision to withdraw from a ceremony commemorating the assassinated leader. Rabin’s role in the Oslo Accords and the Israeli-Palestinian peace process have come under particular scrutiny — but there are some important neglected facts in the left’s views of Oslo and of Rabin as “peacemaker.”

Twenty-five years after its signing, Oslo is often portrayed by the left as the process that created and enabled the current conditions in the occupied territories: the complete disconnect between the occupied West Bank and the besieged Gaza Strip; Palestinian enclaves in the West Bank that are semi-controlled by the Palestinian Authority and separated by a matrix of checkpoints; endless settlement expansion; and so on. For some, the present situation is seen as the success of rather than a deviation from the Oslo process, as was intended by Rabin and the Israeli government.

This belief has become prevalent among the progressive left. Writing in Jacobin, Hadas Thier argues: “Instead of a Palestinian state, the Oslo Accords offered a limited autonomy, under the direction of a newly created Palestinian Authority. Israel maintained its control over borders, airspace, and waters […] The Oslo Accords were never about reaching a compromise, let alone a just peace.” In a similar vein, days after AOC’s decision, +972 editor Amjad Iraqi wrote: “Oslo was never derailed by Rabin’s death — it achieved exactly what Rabin had set out to do.”

On the one hand, the claim that today’s occupation is based on Oslo is true: after all, the post-Oslo phase of the occupation, at least in the West Bank, relies on the so-called security arrangements between Israel and the Palestinian Authority, which were a direct outcome of the accords. On the other hand, there is an aspect of the current situation all too easily overlooked: that the continuation of the occupation is in fact the failure of Oslo, rather than its success, because Israel has turned its back on and abandoned the agreement.

Oslo had two main components: first, a framework based on mutual recognition and a commitment to reach a negotiated agreement; and second, a series of interim steps that were intended to lead to final status talks.

The interim steps are the essence of the Oslo agreement. At the heart of these measures was, for example, the establishment of the Palestinian Authority and the first withdrawal from Area A, which today is meant to be under full PA control. Just as important was a measure labeled the “third withdrawal,” under which Israel was supposed to turn over to the PA all of Area C of the West Bank (which is under full Israeli military and administrative control, and the subject of the recent annexation debate), while holding on to Jerusalem, the settlements, and IDF military bases. In other words, under Oslo, Israel had agreed to withdraw from more territory than what is required today by Trump’s so-called “peace plan” as a prelude to the negotiations about the final agreement — not as their conclusion. 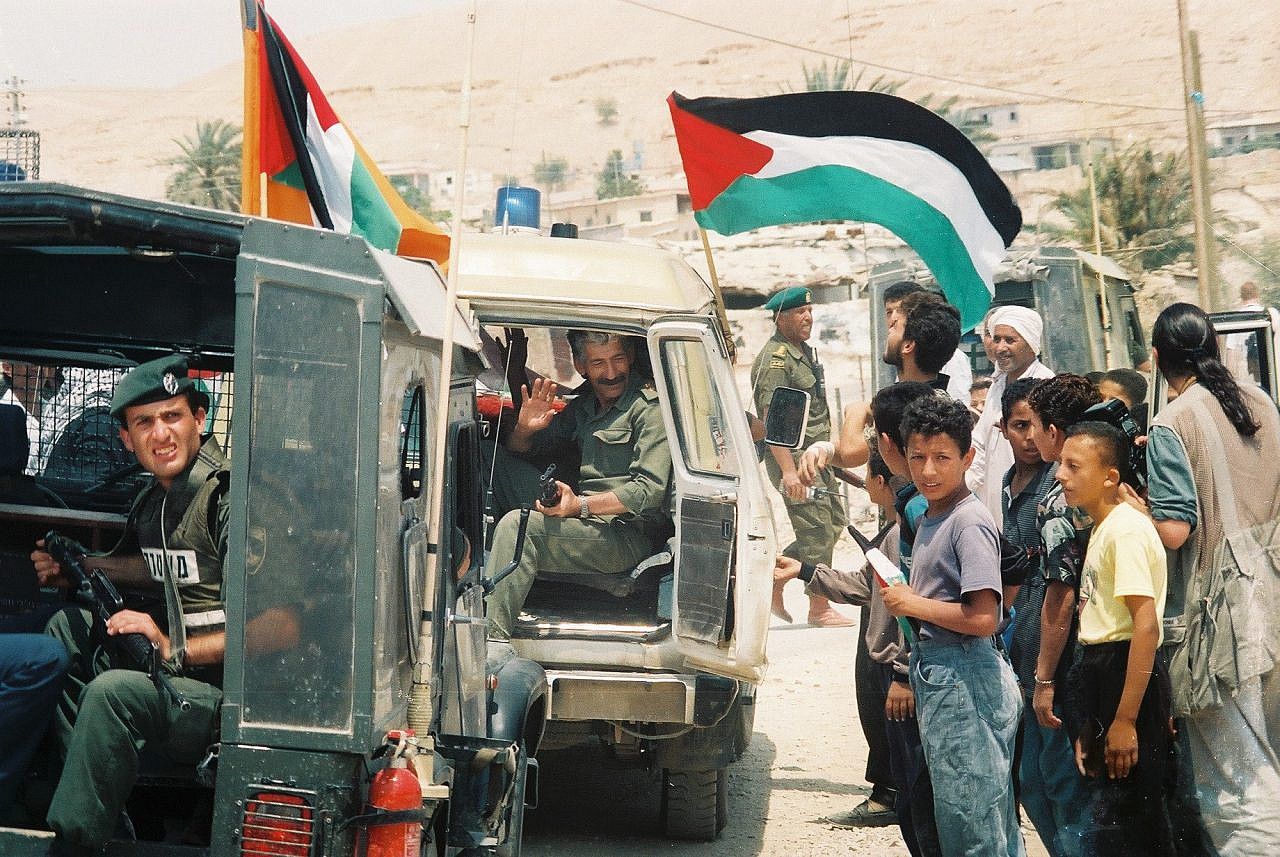 Palestinians celebrate the entrance of Palestinian police officers into Jericho, May 13, 1994. Jericho was one of the first cities in the occupied West Bank handed over to the Palestinian Authority in accordance with the Oslo Accords. (Yossi Zamir/Flash 90)

It is this part of the Oslo Accords that then-opposition leader, Benjamin Netanyahu, vehemently opposed. Crucially, his misgivings were shared by Ehud Barak, who abstained from the government’s vote on the accords, thus incurring Rabin’s wrath. The objection, at least for Barak, was strategic: Israel should not withdraw from most of the territory before final status talks, since doing so would relinquish valuable bargaining chips and weaken its negotiating position vis-à-vis the Palestinian leadership.

Netanyahu and Barak did not abandon their objections after the accords were signed. On the contrary: following Rabin’s assassination in 1995, the third withdrawal never took place. Shimon Peres, who took over after Rabin was gunned down, stalled the move, perhaps intending to wait until after the elections (which he lost), while Netanyahu, who succeeded him, spent three years in office dragging his feet to avoid it. By the time Barak became prime minister in 1999, the third withdrawal was off the table; even the liberal Zionist Meretz party, which was officially committed to Oslo, joined Barak’s coalition without so much as mentioning it.

Barak finally put Oslo’s interim steps to rest by convening peace talks at Camp David in 2000 and adopting an “all-or-nothing” approach for final status negotiations, thus skipping over the third withdrawal altogether. Camp David was not a continuation of Oslo — it was the anti-Oslo. Put simply, the reality in the occupied territories today is the product of a process that was never completed.

These facts neither redeem the Oslo Accords nor do they prove conclusively that Rabin intended and would have gone through with the third withdrawal, or that he accepted a viable Palestinian state. But they cannot be ignored, either. The isolated Palestinian enclaves across the West Bank are indeed a product of Oslo, but they are not a realization of it. This holds even if one believes that the present situation was a foreseeable potential consequence of the accords.

The reading of the present as a realization of Oslo is perhaps best manifested by a natural misunderstanding of Rabin’s programmatic speech to the Knesset in 1995. Iraqi writes:

A month before his assassination, Rabin told the Knesset that his vision was to give Palestinians “an entity which is less than a state” — a precedent to the “state-minus” advocated today by Netanyahu and outlined in Trump’s “Deal of the Century.” Rabin also insisted that the Jordan Valley would remain Israel’s “security border” — the very plan that drew international outcry this year, when Netanyahu pledged to formally annex the area.

As was typical of Rabin, the speech is a very carefully worded. Two terms stand out: “entity which is less than a state” and “security border.” But what can we take them to mean? The first, one can assume, is based on the longstanding demand that the Palestinian state be demilitarized. Think of this condition what you will, but it is a far cry from the “state minus” found in Trump’s offer, which is a state in name only, lacking any semblance of geographical continuity and, more than anything, resembling the Bantustans of apartheid South Africa. 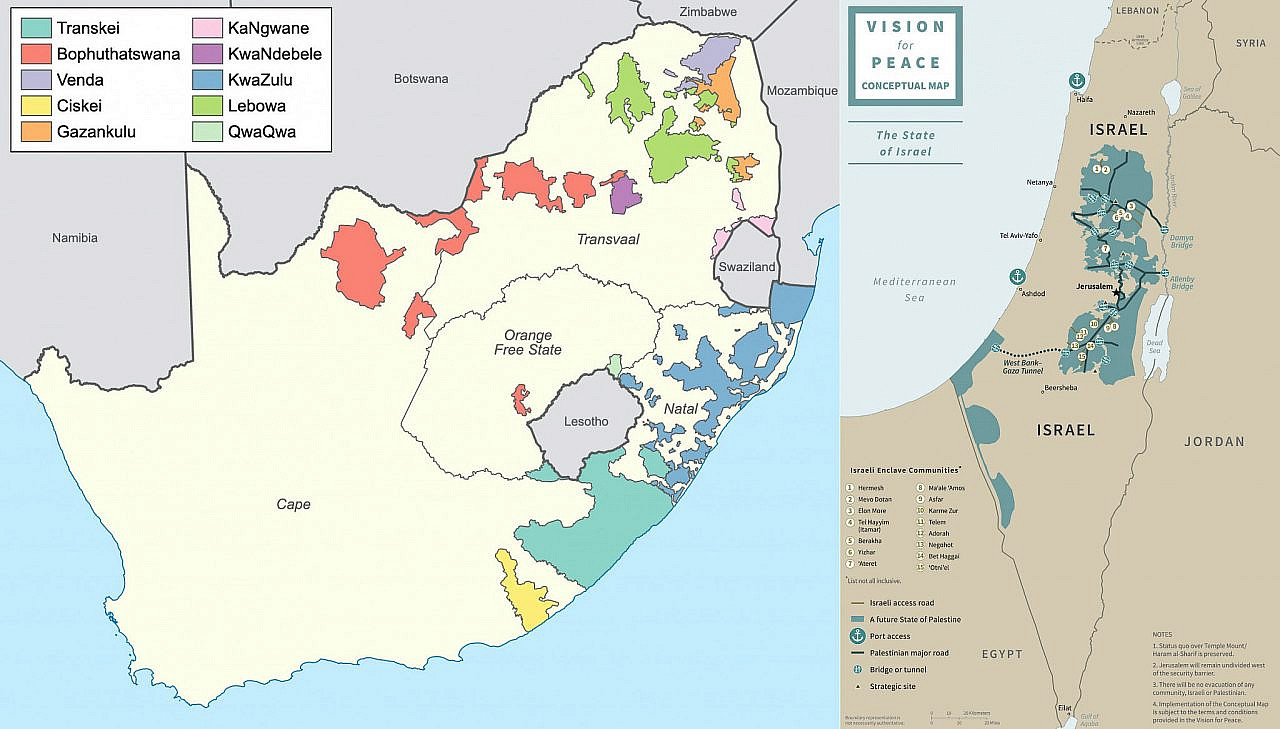 Left: A map of South Africa’s Bantustans at the end of apartheid in 1994. Right: Map of proposed Israeli-Palestinian borders as part of U.S. President Donald Trump’s “Deal of the Century.”

The second term is more telling. What is a “security border”? What Rabin may have been arguing for was to have an Israeli military presence of some kind on the border with Jordan, in addition to a commitment that there would be no other military force east of the Jordan River. Again, think of these requirements what you will, but they too are a far cry from annexation and as close as possible to conceding that the Jordan Valley would be part of a Palestinian state without actually saying so. The valley would have been part of a viable state under Palestinian sovereignty with all that entails, and at least some of the military restrictions would presumably have had an expiration date.

So did Rabin aim for peace and the establishment of a viable Palestinian state? As Iraqi points put, there are too many counterfactuals involved here, certainly for those who wish to redeem the reputation of the Oslo Accords. But it is clear that Israeli policy — from the days following Rabin’s murder to the present — involves a rejection of Oslo, even though the situation on the ground was indeed shaped by it.

Yuval Eylon is a senior lecturer in philosophy. He has written on politics and Israeli policy in various publications.