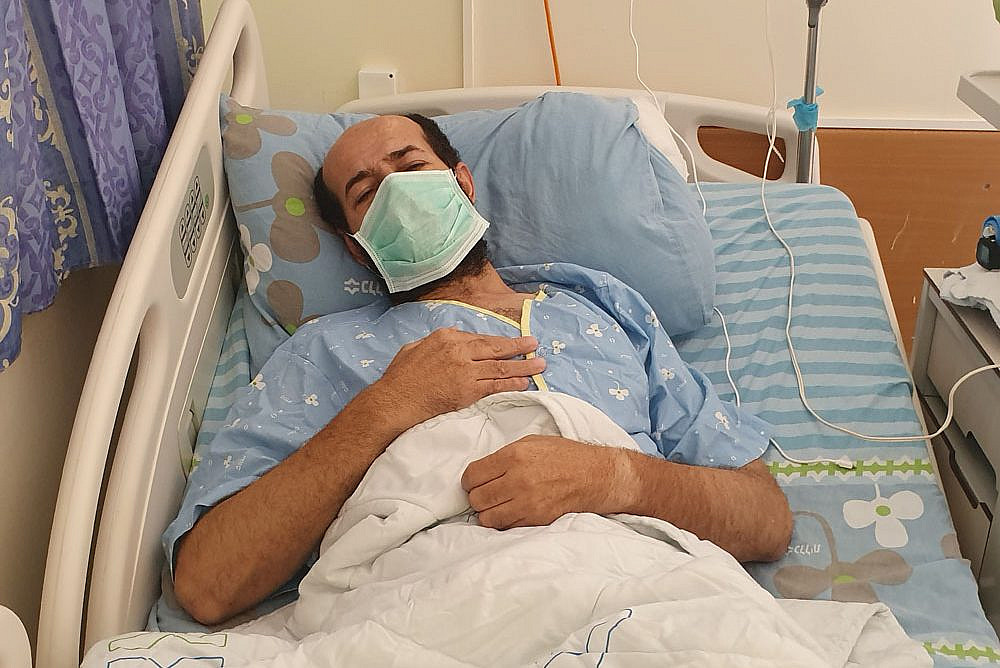 Palestinian administrative detainee Maher al-Akhras, 49, in Kaplan Medical Center, Rehovot, where is on day 73 of a hunger strike. (Oren Ziv/Activestills)

A Palestinian administrative detainee is facing mortal danger as he entered his 73rd day of a hunger strike in an Israeli hospital on Wednesday.

Maher al-Akhras, 49, is currently hospitalized in Kaplan Medical Center in Rehovot, south of Tel Aviv in the center of the country, where he has refused all medical treatment and is only accepting water.

Two weeks ago, the Israeli High Court of Justice “froze” al-Akhras’ detention pending an improvement in his condition, yet refused to cancel it or allow him to leave the hospital. Al-Akhras is worried that he will be re-arrested after he resumes eating and is demanding assurances that this will not be the case.

Al-Akhras, a father of six from the village of Silat al-Dahr in the northern occupied West Bank, was arrested on July 28, allegedly on charges of belonging to Islamic Jihad. On Aug. 7, he was put in administrative detention for four months. He has been on hunger strike since the day of his arrest. Al-Akhras was brought to Kaplan Medical Center on Sept. 6 after his condition worsened.

On Wednesday, Lt. Col. Ophira Alkabetz Rothstein informed al-Akhras’ lawyer, Ahlam Haddad, that the Israeli military was willing to consider not extending al-Akhras’ administrative detention beyond its expiration date on Nov. 26, on the condition that he put an end to his hunger strike.

Al-Akhras, who is in Kaplan Medical Center’s inpatient ward, looks exhausted and pale. In a weak voice, he told reporters on Tuesday that he would continue his hunger strike until his release, and thanked those who stood by him. He further expressed hope that his case and the injustice done to him “would be spread here and all over the world.”

Haddad told Local Call that al-Akhras’ condition was deteriorating, and that a doctor said he is suffering from “muscular atrophy in his hands and feet, as well as degeneration in the brain.”

Haddad asked the doctor to write down the symptoms in al-Akhras’ medical record in order to bring them before the court, after previous reports stated the detainee was in “stable condition.” According to Physicians for Human Rights – Israel, two medical opinions from the hospital stated that al-Akhras is in life-threatening condition. The opinions further stated that despite approval from the hospital’s ethics committee, the staff did not force treatment onto al-Akhras.

On Tuesday, al-Akhras’ wife, Taghrid, received permission to cross into Israel and visit her husband. This is the second time she has visited him since he was arrested and began his hunger strike. “He is very weak and tired when he speaks,” Taghrid told Local Call outside the hospital. “He has heart problems and [is in] severe pain. We fear for his life. Maher is a Palestinian man who loves his homeland and his people. He is striking for his own honor and that of the Palestinian people. 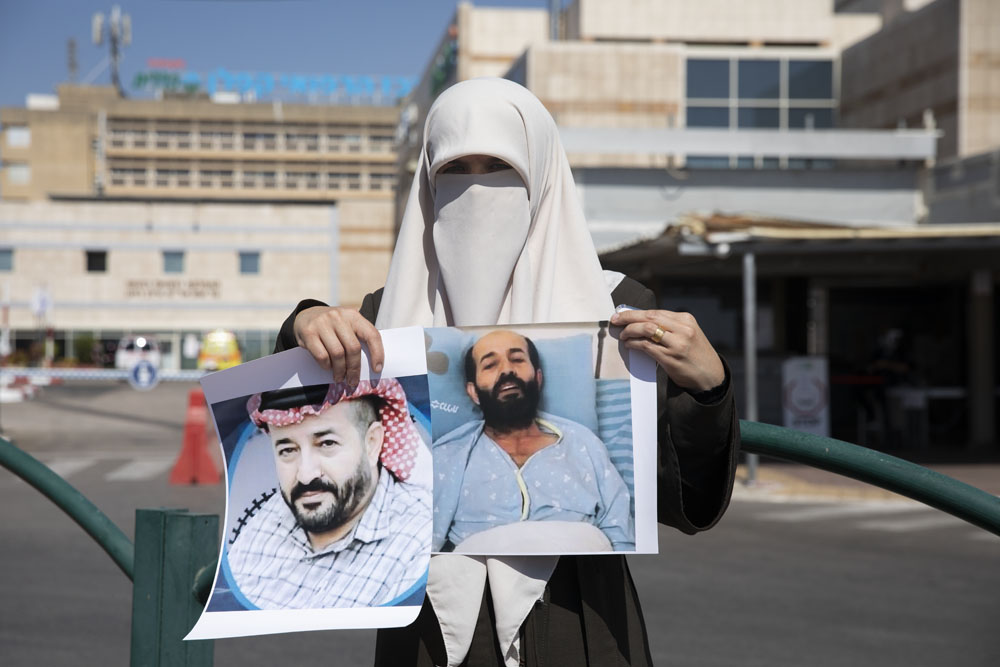 Taghrid al-Akhras, wife of Palestinian administrative detainee Maher al-Akhras, holds up photographs of her husband outside Kaplan Medical Center in Rehovot, where he is on day 73 of a hunger strike. (Oren Ziv/Activestills)

“My husband is under arrest for no reason,” she continued. “In the past, he was threatened with arrest and told his life would be destroyed. The purpose of the strike is liberation.” Taghrid said that her children had not received a permit to enter Israel and that they were “ready to hear news about his condition and are just waiting for him to return home.” On Wednesday, Taghrid announced she was joining her husband in his hunger strike.

On Tuesday, a number of left-wing activists and members of Knesset from the Joint List visited al-Akhras at the hospital. Upon arriving, MKs Ofer Cassif, Ahmad Tibi, and Osama Saadi were detained for nearly 20 minutes at the hospital entrance, even though al-Akhras is not currently defined as a detainee and is allowed visits like any other patient. Tibi and Saadi were allowed to enter only following intervention by the hospital’s deputy director.

“I visited al-Akhras two weeks ago, but his condition has deteriorated since, he is suffering and being tormented,” Cassif told Local Call. “If Israel lets him die, it will be the fault of the Israeli government.” Cassif said he had demanded Defense Minister Benny Gantz release al-Akhras but was rebuffed by defense officials.

“Administrative detention is the ugliest of tools,” said Tibi at the entrance to the hospital. “There are no charges, only a secret case. He’s facing death, so we came here to demand his release.”

During a closed-door session at the High Court of Justice last week, the state claimed that al-Akhras had been recorded boasting about being a member of Islamic Jihad, according to Hagar Shezaf in Haaretz. That day, at the request of al-Akhras’ lawyer, the State Attorney’s Office submitted a transcript of the video, which made no mention of his statements about Islamic Jihad. It included only statements referring to his intention to continue the hunger strike until he is either released or becomes a martyr, along with a call to defend al-Aqsa Mosque.

Amnesty’s statement stressed that al-Akhras is just one of hundreds of administrative detainees being held by Israel. “Israel must immediately release all administrative detainees or give them a fair and transparent trial according to international standards,” the statement said. “Israeli authorities are using this destructive practice in violation of international law as a tool for the social and political oppression of the Palestinian people, while committing serious violations of human rights.”