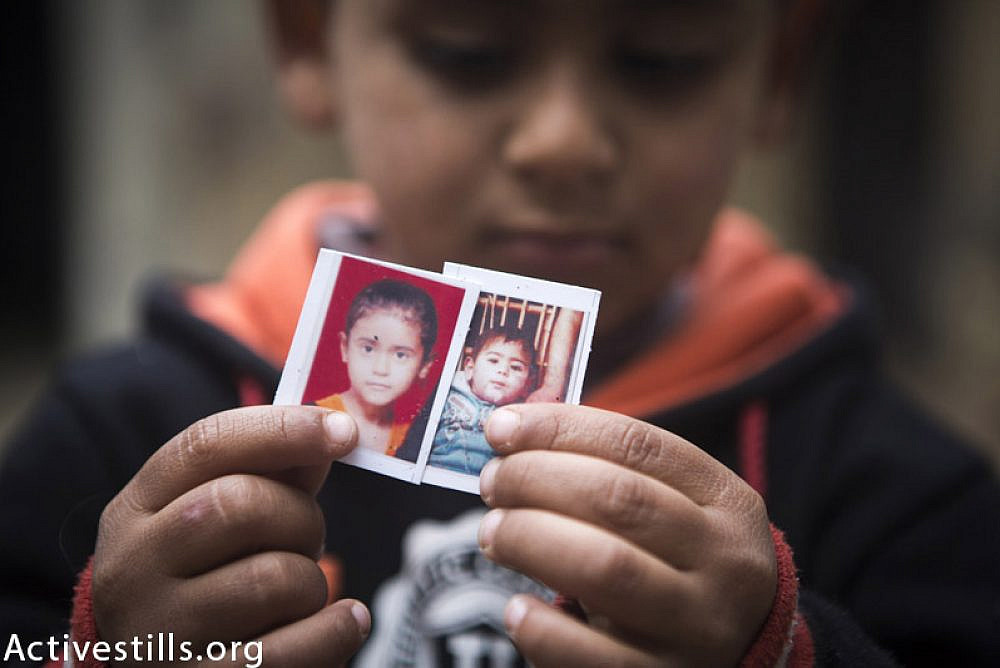 Fadi Ibrahim Abu Khusa (4) holds the photo of his two killed siblings, Shahed (9) and Mohammed (2), in their home in Zawaida village, central Gaza Strip, February 24, 2015. The two children were killed with their parents, Ibrahim and Sabreen, and 4 other members of their family by an Israeli attack on their home which occured on July, 30, 2014. Ibrahim and Sabreen went to the home of Sabreen's father one week before the attack thinking they would be safer. (Anne Paq / Activestills.org)

Last week, the government of Belgium caved in to intense Israeli government pressure and effectively disinvited me from briefing the UN Security Council in New York today.

Ironically, the decision to exclude my voice as a representative of Defense for Children International – Palestine (DCIP), a Palestinian human rights organization, exemplifies and reinforces the message I had prepared to deliver before the Council.

I was invited by Belgium’s Permanent Mission to the UN in late January to brief members of the Security Council on violations of children’s rights in Israel and the occupied Palestinian territories.

Belgium, which holds the rotating Security Council presidency for this month, is a leader of the UN’s global agenda on children and armed conflict, and as such wanted to highlight these specific themes during the Council’s monthly meeting on the Middle East and Palestine Question. The Belgians wrote in their invitation that this focused discussion would help “to enrich the debate” on the Palestinian issue.

I gladly accepted. The fact that Belgium was willing to invite a local Palestinian human rights organization like DCIP to brief the Council was commendable, as civil society space at the UN has been shrinking for years. While they urged me to be “balanced” in my statement (which I had shared with them for feedback), they understood that Palestinian children overwhelmingly and disproportionately bear the brunt of the kinds of violations they sought to highlight.

Then the troubles began. 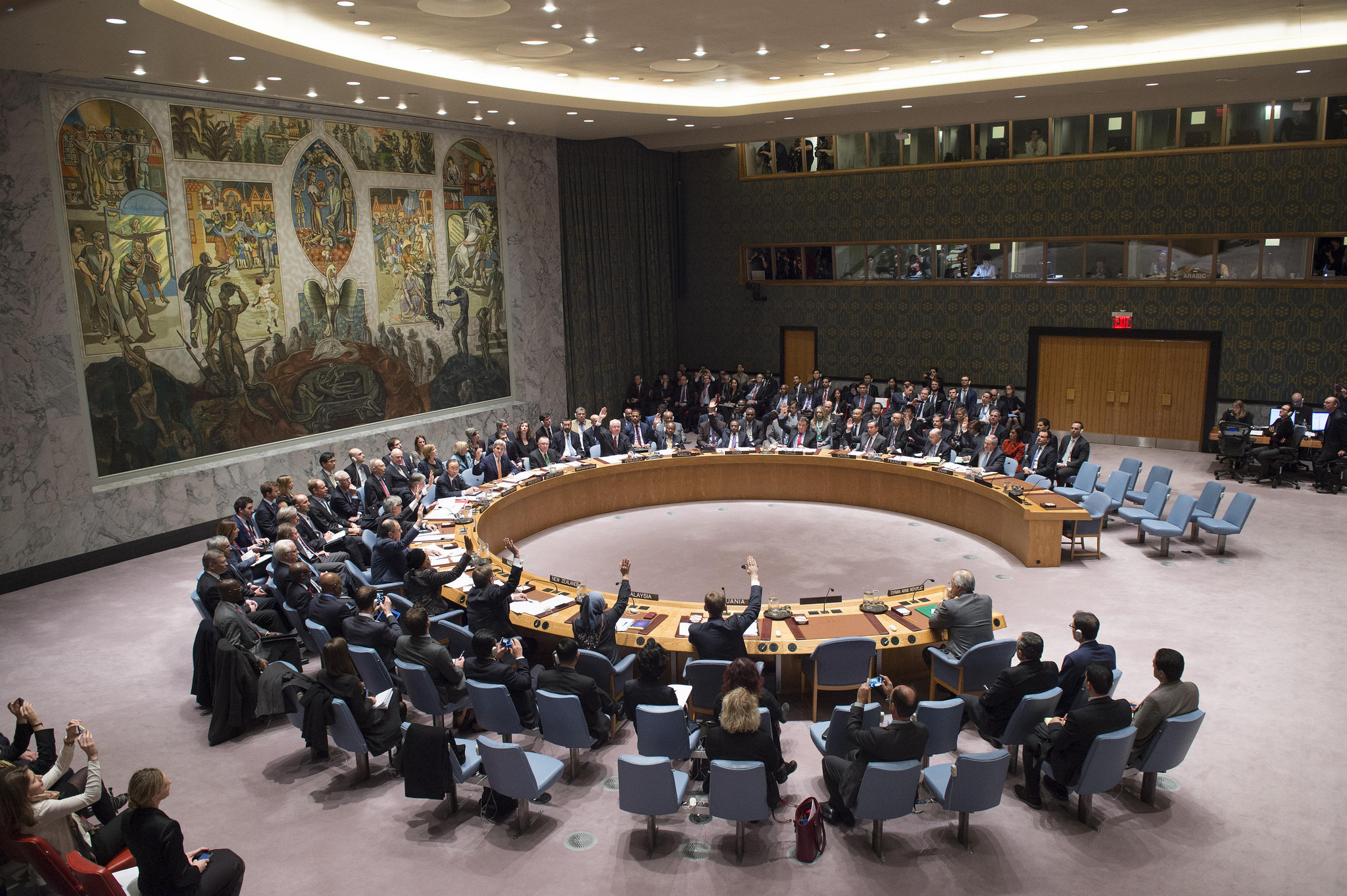 As soon as Israeli diplomats were informed of my attendance, Emmanuel Nahshon, the Israeli Ambassador to Belgium and Luxembourg, reportedly asked the Belgian government in early February to cancel the invitation. The Israeli Foreign Affairs Ministry summoned Belgium’s Deputy Ambassador to Israel, Pascal Buffin, on two separate occasions to formally object to the invitation. These requests were initially rejected.

Israeli officials and right-wing organizations, like NGO Monitor, and their affiliates subsequently mounted a well-orchestrated political and media disinformation campaign to press the Belgians to capitulate.

Then, four days ago, I received an early morning phone call informing me that Brussels had decided to change the Security Council event from an open meeting to a closed meeting — meaning that I was no longer a participant.

Belgium’s acquiescence to Israel’s demands is a frustrating and devastating blow. Not only is it a shameful act of censorship, but it also boosts longstanding efforts to delegitimize human rights work and basic tenets of international law when it comes to Palestinians.

Over the past two weeks, I have falsely been called everything from an “extreme anti-Israel activist” and “minor American propogandist,” to a “terror supporter” and “diplomatic terrorist.”

Israel’s Ambassador to the UN, Danny Danon, even wrote a letter to UN Secretary-General Antonio Gutteres calling DCIP “an arm of the PFLP (Popular Front for the Liberation of Palestine) in order to enact diplomatic terror against Israel,” adding, “A place that promotes peace and security in the world has no room for people like Parker.” 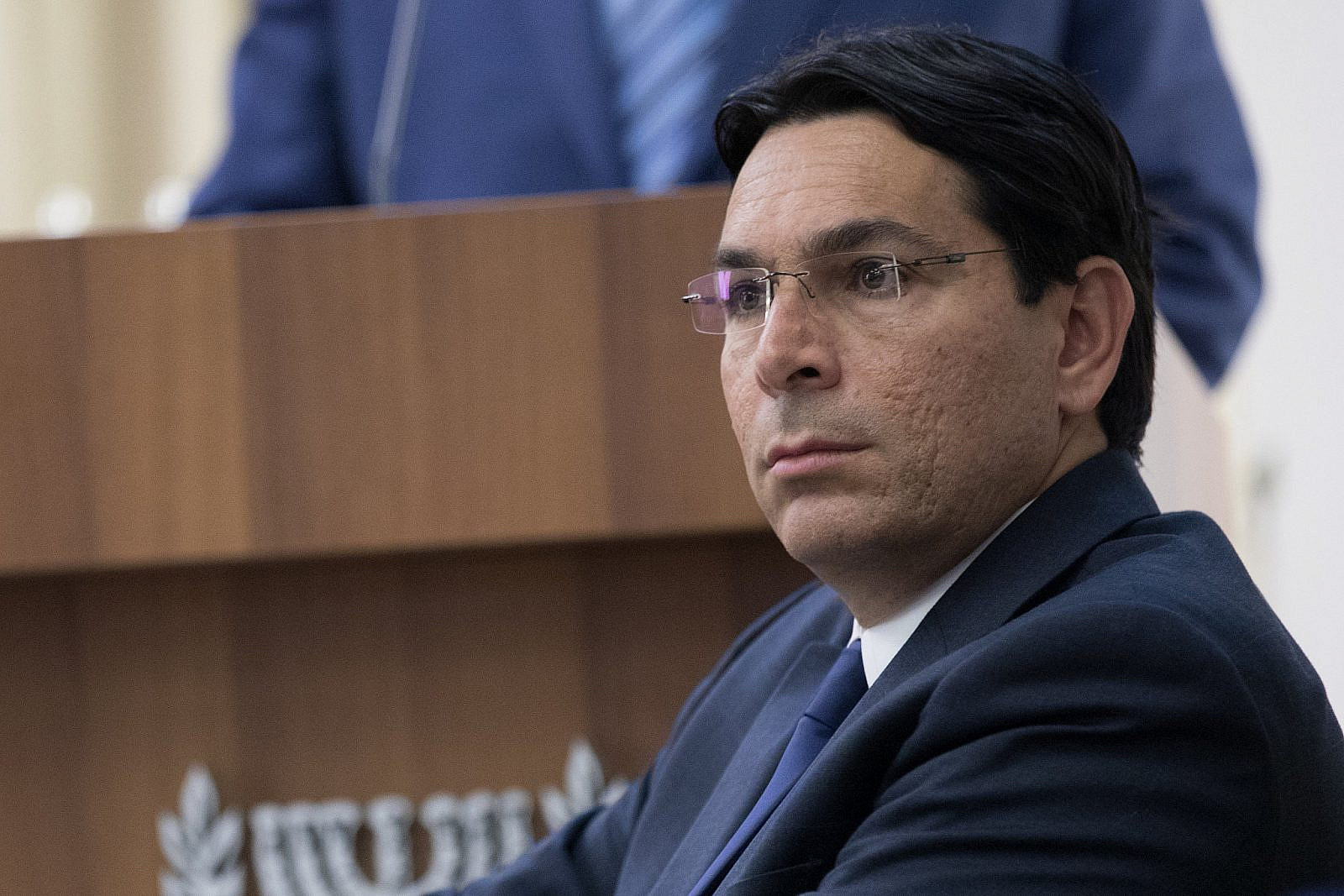 DCIP and other civil society organizations in Palestine and Israel have been increasingly targeted and attacked by Israeli officials, government ministries, and a rising network of right-wing and nationalist social forces in Israel, the U.S., the U.K., and across Europe. A key strategy of these forces is to launch targeted and organized defamation campaigns, based on a range of allegations that try to link us to national counter-terrorism legislation in order to undercut our work.

For DCIP specifically, officials like Ambassador Danny Danon, the Israeli Strategic Affairs Ministry, NGO Monitor, and UK Lawyers for Israel (UKLFI) are alleging that we support and further terrorist acts. They amorphously claim that DCIP board and staff members are “affiliated,” “linked,” or have “alleged ties” to the PFLP.

Yet, no evidence is presented on how DCIP’s work — our field research, documentation, legal services, and advocacy — is in any way involved in supporting terrorist acts. Moreover, no trials or indictments have been initiated by Israeli authorities against DCIP board or staff members on such accusations during their time with the organization.

Rather than demand Israeli authorities stop unlawfully killing Palestinian child protesters in Gaza with live ammunition, or end ill-treatment and torture of Palestinian child detainees, or hold perpetrators accountable, these actors are disseminating misinformation aimed at silencing, defunding, and eliminating legitimate human rights work and criticism of illegal Israeli policies toward Palestinians. And unfortunately — wittingly or unwittingly — governments like Belgium are helping them.

So, if Belgium had not crumbled to the pressure, what did the Israeli government not want me to tell the UN Security Council today? 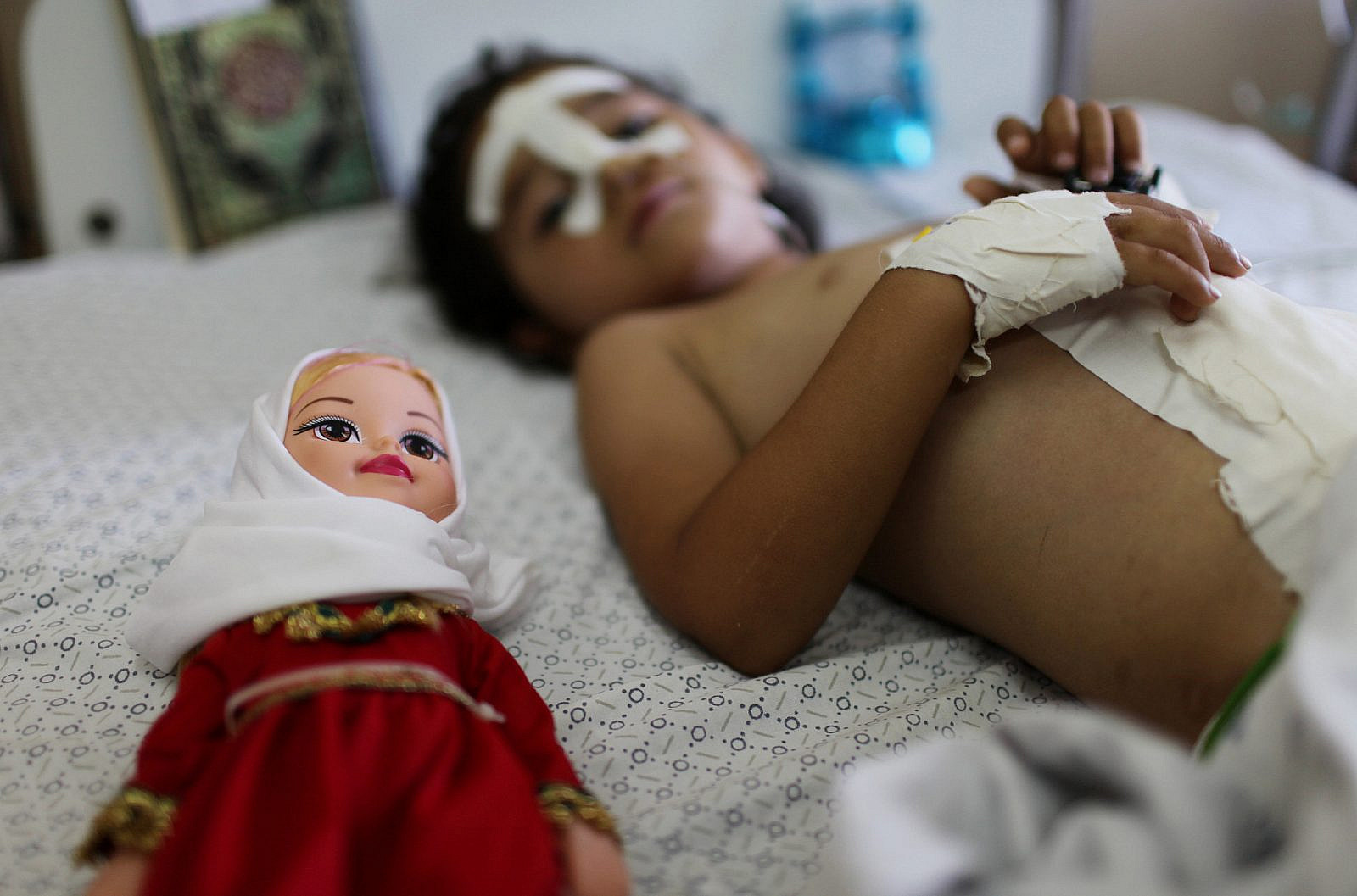 Four-year-old Palestinian girl Shayma Al-Masri, who was wounded in an Israeli air strike that killed her mother and two of her siblings, lies next to her doll as she receives hospital treatment in Gaza City, July 14, 2014. (Emad Nassar/Flash90)

First, using largely UN-verified information, I would have explained how Palestinian children are disproportionately affected by armed conflict at the hands of Israeli forces. Second, I would have highlighted how the persistent failure of the UN Secretary-General to hold Israel accountable has fostered impunity for such grave violations against children.

My planned statement offered a solution. Each year the UN Secretary-General submits a report to the Security Council detailing the situation of children’s rights in specific situations of armed conflict, including Israel and the State of Palestine.

Security Council Resolution 1612, adopted in 2005, formally established a UN-led, evidence-based monitoring and reporting mechanism on grave violations against children during armed conflict. The six violations include killing and maiming; child recruitment; sexual violence; attacks on schools or hospitals; denial of humanitarian access for children; and abduction.

Where armed forces or groups are found to commit such violations against children, the Secretary-General is obligated to list them in the annex of his annual report. This list has become known as the UN’s child rights “blacklist” or “list of shame.”

The mechanism has proven to be a strong tool to bolster protections for children during armed conflict over the past decade. But despite persistent reports by UN agencies like UNICEF and local groups like DCIP, both Guterres and his predecessor Ban Ki-moon refused to include Israeli armed forces on the blacklist. 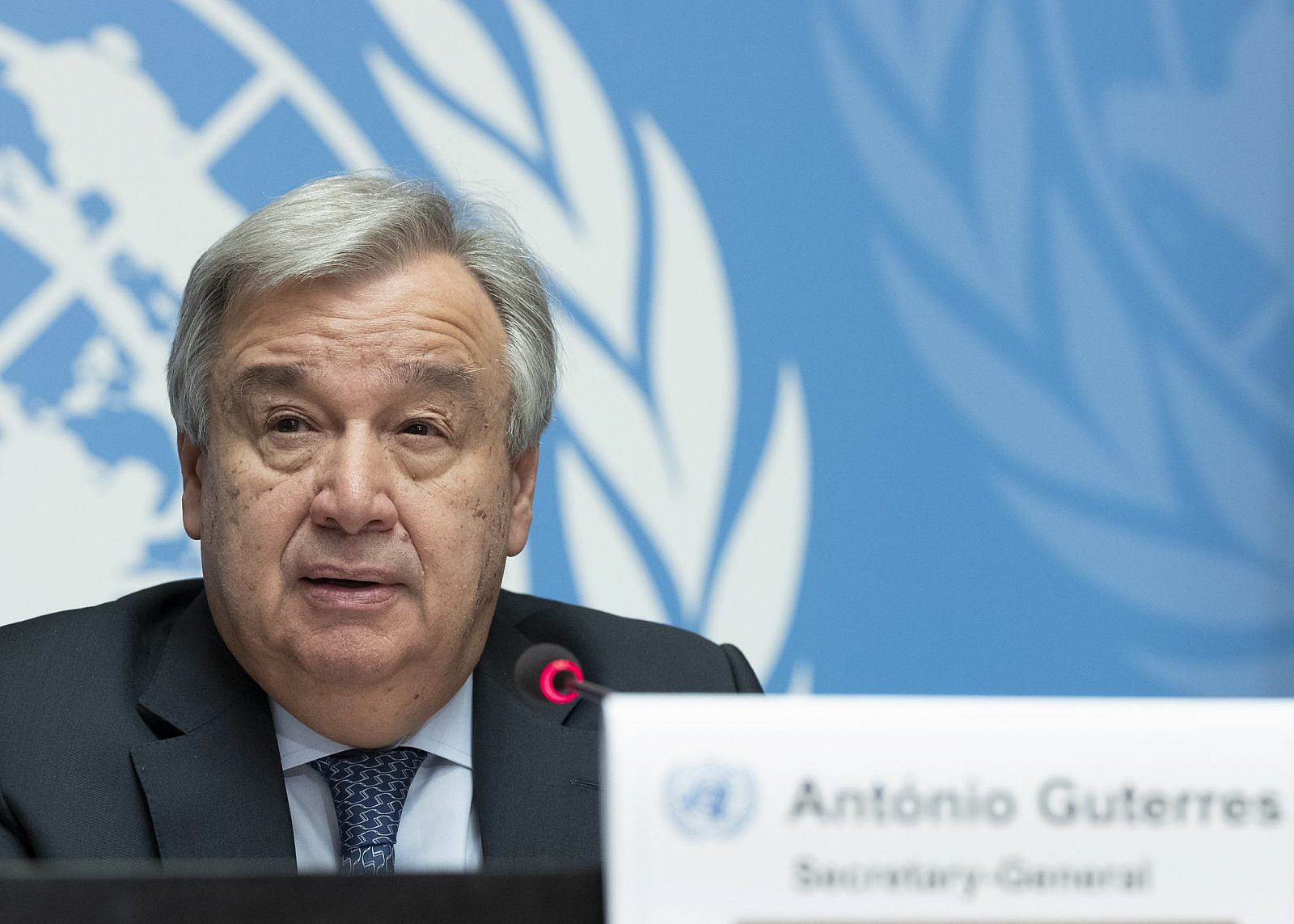 Secretary-General António Guterres during press conference on the theme on violence against women in conflict. 25 February 2019. (UN Photo/Jean Marc Ferré)

While he expressed alarm at the “unprecedented and unacceptable scale” of destruction and harm caused by Israel’s military operation that year, he still omitted Israel’s forces from the annex. Reportedly, he caved in to significant pressure from the U.S. and Israel.

Ban Ki-moon’s decision, and Guterres’ continuation of that decision, has effectively transformed a strong accountability mechanism into a politicized process where powerful governments can exempt themselves from scrutiny and the rules of international law.

As I wrote in my planned statement to the Security Council, Israel’s absence from the blacklist essentially gives it “tacit approval to continue committing grave breaches of international law with impunity. We are still, today, dealing with the impact of this decision.” 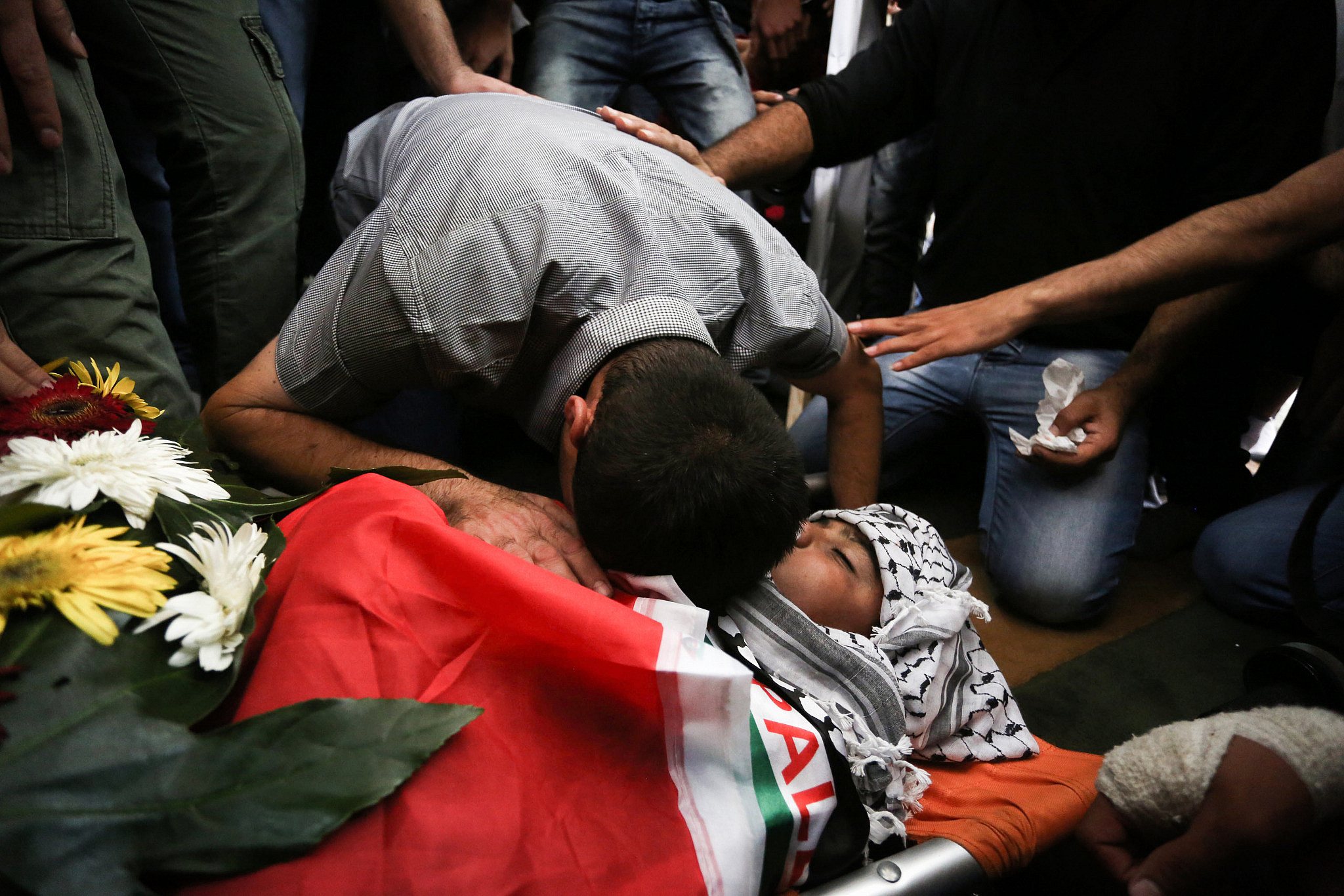 Mourners carry the body of 13-year-old Palestinian boy Ahmed Sharaka, who was killed by Israeli troops after being hit in the head by a plastic-coated metal bullet, in Jalazoun refugee camp near Ramallah, October 12, 2015. (Flash90)

Today, I had hoped to reaffirm a message that Hagai El-Ad, Executive Director of the human rights organization B’Tselem, had brought to the Council in 2018: a rules-based international order will not defend itself.

If the UN’s children and armed conflict agenda is to remain relevant and credible, it is imperative that the listing process does not give an exception to Israel for its grave violations. Year after year, Palestinian children must deal with the compounded failures of these policymakers, and without accountability, these violations will continue bleeding from one year to the next.

Given the attacks and campaigns against Palestinian human rights defenders and civil society, Belgium’s actions are entirely irresponsible. When a supposed champion of these values lifts you up, knowing full well that it may place a target on you, it is disheartening to seem them give in to such pressure. This lack of political will all but ensures systemic impunity will remain the norm for Palestinian children.