I am Nasser Nawaj’ah. I am 30 years old. My mother gave birth to me in a cave in Susya El-Kadis. You know of Susya as a Jewish settlement in the South Hebron Hills, but Susya is first of all a Palestinian village that existed before the establishment of the State of Israel.

I was named after my grandfather, who was still alive at the time. In 1948, he was displaced from his village near Arad, now in southern Israel. When they were expelled, my father was just a little boy and my grandfather carried him in his arms until they reached their family in Susya El Kadis. They hoped one day to return to their village, but my grandfather died without ever seeing it again. 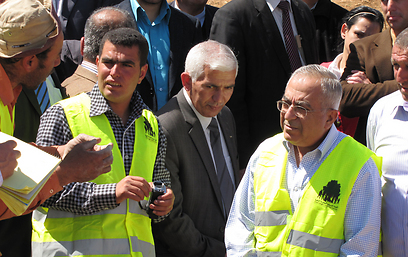 A year after I was born, in 1983, the settlement of Susya was established. In 1986, after Israeli archaeologists found remnants of a synagogue in our village, we were expelled again. I was 4 years old. My father took me in his arms while bulldozers destroyed our homes and blocked the caves that we lived in. We scattered in our agricultural lands around the village. The grown-ups hoped that we would one day return to our caves, but a fence was built around the village and it was turned into an archaeological site. Today we still live on our agricultural land and I can see the place where I was born, but cannot go there. Israelis and foreigners from all over the world enter the site, but I cannot.

After 1990, the expulsion attempts started up again. Despite the fact that we have documents proving that the land belong to us, the caves we lived in and our water wells were destroyed. But each time, we returned and built anew. At the same time, the Israeli settlement of Susya continued to flourish and grow. In 2001, after the murder of Yair Har Sinai, settlers arrived with the army and again destroyed the caves and the wells and uprooted our trees. It was only after 10 days and an interim decision by the Israeli High Court that we were able to return to our homes.

Today we live in tents – and even these were threatened with demolition orders forcing us to obtain permits for them. This is the life of a Palestinian in Area C of the West Bank. We are denied building permits, and are disinherited and banished from our land. Each time we request permits from the Israeli army, we are denied. The water pipes of Israel’s Mekorot water company pass several meters away from our village – they bring water to illegal outposts around us but we can’t get water from them. We don’t have access to the water that flows in those pipes, even though this is our water, water that Israel pumps from the West Bank.

We are forced to live off of rain water that we collect in our wells. The water situation in the South Hebron Hills is dire, and we are always forced to supplement by buying water brought in tankers to sustain ourselves through the summer. We pay NIS 35 for a cubic meter of water – about four times as much as you pay for water inside Israel.

Four months ago, the Regavim organization filed a petition to the High Court demanding that our village, Susya, be destroyed. They refer to it as an “illegal outpost” and claim that our village presents a security threat. Last week there was a hearing in the Israeli High Court. They call my village an illegal Palestinian outpost. But these have been our lands since before the establishment of the State of Israel. My father is older than your state and I am not legal on my own land? I ask you: where is the justice in that? In your court there is a difference between a Palestinian and a settler. You call it illegal construction but what we’re talking about is an underground cave that is hundreds of years old.

Illegal Israeli settlement outposts are all around us in the Susya area, and there are many buildings inside settlements with pending demolition orders – but they have everything. The government provides them with infrastructure for water and electricity despite the fact that according to Israeli law they are illegal, and nothing happens to them. And now you want to displace the old man from his home? To expel us from land that belongs to us, that we have lived on generation after generation, that is all that we know.

Nasser Nawaj’ah is a field researcher for B’Tselem and a resident of Susya in the South Hebron Hills in the West Bank. This post originally appeared in Ynet in Hebrew, and was translated by Libby Lenkinski. 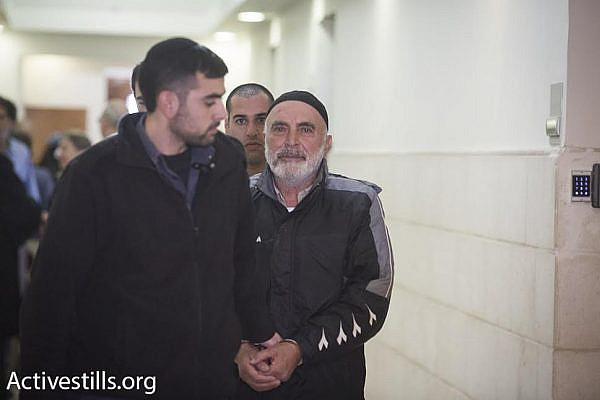 These are the anti-occupation activists jailed under gag order
Israeli authorities arrest prominent activists Ezra Nawi, Guy Butavia, and Nasser Nawajah. At least one of them was barred from meeting with his attorney for days. In court, one activist says his interrogators used materials taken directly from a right-wing organization. Photos and video by Oren Ziv/Activestills.org The three anti-occupation activists in Israeli custody whose identities…
By Edo Konrad January 21, 2016