The Arab League has called on Palestinian citizens of Israel to vote in Tuesday’s parliamentary elections. The unprecedented move by the multi-national Arab group, which in the past supported the Saudi Peace Initiative with Israel, comes as a voter turnout among the Palestinian citizens of Israel – roughly 20% of the Israeli population – is expected to drop yet again. 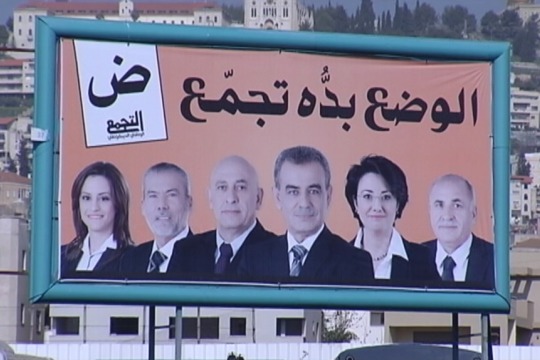 A billboard for the Israeli-Arab party, Balad, in Nazareth, January 2013. Zoabi is a familiar face, though not the party’s head. (photo: GS) 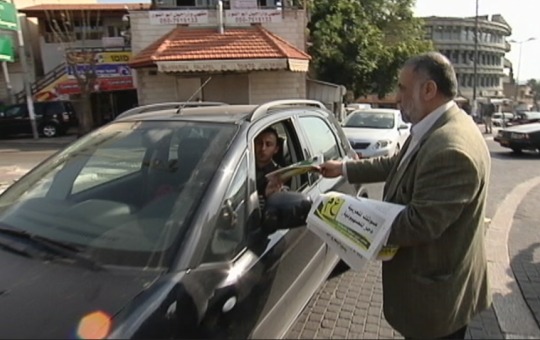 Volunteer from one of the Arab parties canvasing potential voters in Nazareth, Israel, January 2013. Israel’s Arab who do vote usually split their votes among three parties. (photo: GS)

A decade ago three-quarters of Arab-Israelis voted. In the last election, only half did. The majority voted for Arab parties, which are historically excluded – and their voices with it – from coalition-formed governments. Some Arabs end up voting for the Jewish parties, and a few Arabs secure seats on their lists. (Several of the Zionist parties include Arab candidates.)

But the Arab parties themselves are split, most notably into Islamist, communist and nationalist camps. Parliamentarian Hanin Zoabi (Balad) comes from the last group. On Saturday, I caught up with Zoabi as she addressed supporters in Kufar Manda, near Nazareth. 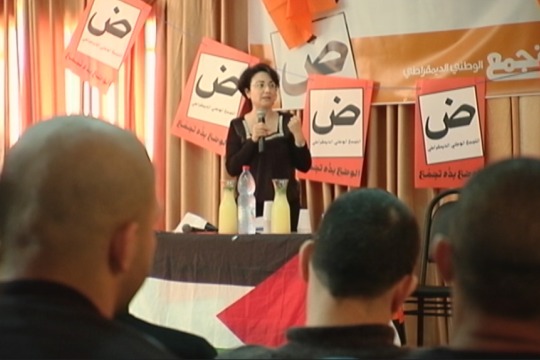 MK Hanin Zoabi addressing supporters in Kufar Manda, Israel, standing behind a Palestinian flag, January 2013. Many Jewish-Israelis question the loyalty that Palestinian citizens of Israel have to the Jewish State. (photo: GS)

Speaking to young Arab voters from a stage draped in a Palestinian flag, I could not help but think of the accusation often made by Israel’s Jewish nationalist camps that these citizens aren’t loyal to the State. For a number of reasons, including most notably her participation in the deadly Gaza-bound flotilla in 2010 – Zoabi is considered to be among the leaders of the “disloyal pack.” But Israel’s Arabs are twice as likely to be unemployed as its Jews, and two-thirds of their children are deemed poor. That’s triple  the rate compared to the country’s Jewish population. So I wondered: how loyal has the State been to them? 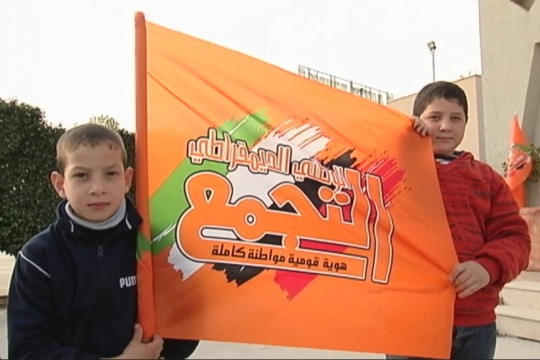 To the dismay of some of my Israeli friends, I will admit that I have developed a certain respect for Zoabi. It’s not because I agree with everything she says – I don’t. But I admire someone who challenges the system. All too often, successful politicians are those who use their position of power to impose their will on the weak. That’s cheap and easy. Zoabi is the type of person who speaks out for the silenced in the face of those who silence her. And that, in my opinion, is commendable. And she is perhaps as unpopular among Jewish-Israelis as she is popular among Arab-Israelis (one possibly being a direct consequence of the other).

The following is my interview with MK Zoabi in Kufar Manda, shortly after she addressed her supporters. 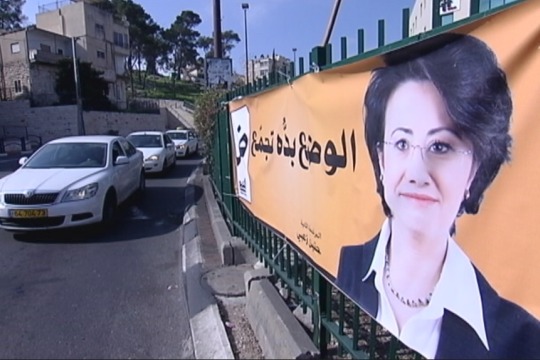 MK Hanin Zoabi featured on a campaign post in a busy Nazareth street, January 2013. Though unpopular among many Jewish-Israelis, Zoabi has become an equally popular figure for Arab-Israelis. (photo: GS)

Ruttenberg: Ms. Zoabi, why is it important for Palestinian-Israelis, Arab-Israelis, Palestinian citizens of Israel – whatever the terminology may be – to vote on election day?

MK Zoabi: First of all, just 50 percent of the Palestinians in Israel vote. For me, it’s important to vote because it’s our voice, it’s our struggle. I know that the Knesset (the Israeli parliament) is not the tool of struggle; we have also other tools which we must use. For example, demonstrations, to raise awareness, are even more important that being in the Knesset. But in the Knesset, I must first of all struggle against racism, I must represent my people, I must represent the rights of my people. I must say to the Jewish system – to the Israeli system – that I am here, I am a native, this is my homeland, I have rights, I don’t agree with racist policies, I don’t agree with racist laws, I don’t agree to turn[ing] me into a second-class or third-class citizen, or even to treat me as a stranger in my homeland. Because I know that I have only two ways: either to give up my rights or to struggle. I believe that every person that has his will and is well-organized, and who [has] empowered himself, he must just represent his rights and represent his position, and we must do that as natives here.

Ruttenberg: You’ve seen in recent years the number of Palestinian-Israeli voters dropping in their percentages. So you are sort of fighting an uphill battle in encouraging people to go out and vote. Why is that? Why are the numbers falling?

Ruttenberg: The Arab parties themselves are split. You have three popular parties presenting the Arab vote, which are actually splitting the Arab vote. Is that a problem for you, that there’s not a united Arab front?

MK Zoabi: Yes, for my party, the National Democratic Assembly, we also try to unify between the parties. We know that we lose at least five seats when we run as three separate parties than one unified party. We can be 16 seats according to polls and public opinion. And as a national party, we believe that we must be unified, also in our work – both inside and outside the Knesset. But the communist party – which doesn’t define itself as an Arab party but rather as a Jewish-Arab party, even though 87% of its voters are Arabs – says, yes, I can give up five seats, I can give up 150,000 voters, because this is part of my ideology – to be a Jewish and Arab party.

Ruttenberg: How do you personally feel when Palestinian-Israelis vote for the Zionist parties, or the Jewish parties, or when some of them even run on their lists?

MK Zoabi: I think this is a natural phenomenon. I think every oppressed people sometimes lacks also the confidence… the oppressor succeeded to have the impression and feeling that we are disempowered, that we cannot represent ourselves, that we need strong parties in order to make some changes from [the] inside, and I think this is natural in any society. And this is the strategy which Israel uses in order to re-define our identiy, to adapt us to say that ‘you don’t have the power and ability or power to make any change, because you are a minority, you will still be a minority.’ So maybe, by just agreeing with the Zionist system, maybe by not changing the basic lines of the State, you can reach some benefits here and there and you can make some changes. Of course, we don’t agree with this and we are sure that the only way to have our rights is to struggle for our rights, not to be a part of the system but to challenge the system. If you are a racist, I cannot just agree with your racism and hope that sometime, maybe somehow, you will just give up some of your privileges to me. But now I think the percentage of those who will vote for the Zionist parties will be 20-22 percent. This is also part of our struggle to convince the people that you cannot make changes by adopting the racism, by admiring even those who are racist against you. Again, this is part of the strategy of empowering the people.

Ruttenberg: You’ve become quite a well-known figure, but you are also quite divisive, not just to Jewish-Israelis, but even some Palestinian-Israelis who say that the elected Arab officials often prioritize the national interests of Palestinians in the West Bank and Gaza before worrying about the domestic concerns of the Arab population in Israel. How do you respond to that sort of concern?

MK Zoabi: This is not a concern of the people, I think. This is not an independent thinking of the people themselves. This is Israeli propaganda, [which] these weakened people have adopted. This is lack of political awareness because the Israeli media doesn’t cover, for example, my daily work in the parliament. They don’t cover, for example, that I succeeded in a program which guarantees 3,000 Palestinian women loans to develop businesses. I worked very hard to raise the percentage of Palestinian working women, and one my small successes was to make the Labor Ministry agree to this program. No one… the Israeli media didn’t talk about that. So the Palestinians don’t know about that. Also, there was (a report put out) about the most active MKs (Members of Knesset) who raise issues (regarding) women. And who was the most active MK who raised the issues of women regarding employment, regarding education, regarding violence against women? It was Hanin Zoabi.

Ruttenberg: Of all women?

MK Zoabi: It was (a poll) about all women in general, but of course I concentrated more on Palestinian women. But it was me among the 120 (Knesset members). The Israeli media didn’t say anything, the Israeli media (didn’t) cover it, except for one article in Haaretz’s The Marker. So it’s lack of awareness, lack of information. And again, it is the claims of the Israeli MKs, it’s the claims of the Zionist parties, which some of our people just repeat without thinking or without really following what we are doing in the Knesset. And part of our work is also to raise awareness about how we work inside the Knesset and what we do.

Ruttenberg: Like it or not, you are a citizen of the State of Israel, and you are a member of the Israeli parliament, the Knesset. Are you proud of that?

email
Before you go…
A lot of work goes into creating articles like the one you just read. +972 Magazine is nonprofit journalism, owned by many of our writers, editors, and journalists. In order to safeguard that independent voice, we are proud to count you, our readers, as our most important supporters. With your support, we can keep +972 Magazine a strong, independent, and sustainable force helping push the global discourse on Israel/Palestine.
DONATE
More About Israeli elections 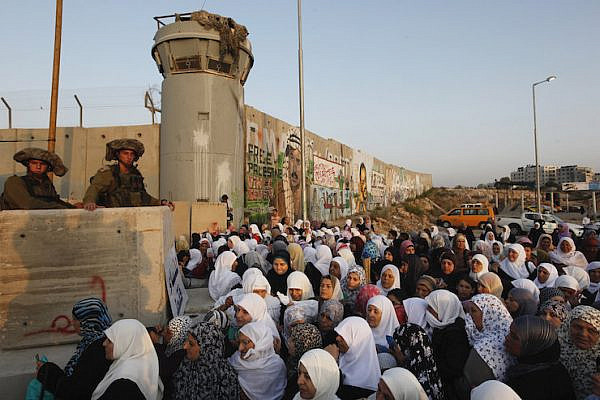