Following the United Nations vote to recognize Palestine as a non-member observer state, Israel quickly announced it would reignite construction in the E1 area of the West Bank, long considered by the U.S. as the last nail in the coffin of the two-state solution. The move is not only Israel’s affront to the two-state solution, but to its existence as a Jewish state.

In his speech at the United Nations General Assembly on Thursday, Palestinian Authority President Mahmoud Abbas made his commitment to a two-state solution explicitly clear:

Palestine comes today to this prestigious international forum, representative and protector of international legitimacy, reaffirming our conviction that the international community now stands before the last chance to save the two-state solution. (emphasis mine)

Just moments later, Israel’s UN envoy Ron Prosor went up to the podium in the General Assembly, and what he said indicates that he either didn’t bother to listen to what Abbas said, or preferred to lie through his teeth:

But Abbas did say it. Not verbatim “two states for two peoples,” but he said “two-state solution,” which is exactly the same thing. So Prosor’s words are baseless. Furthermore, amid Abbas’ criticism of Israel’s destructive conduct – which includes “unprecedented intensification of military assaults, the blockade, settlement activities and ethnic cleansing” (all undeniable facts) – he also made a point to emphasize that the UN bid for non-member observer status is not aimed at delegitimizing Israel, as in fact, it has nothing to do with Israel.

We did not come here seeking to delegitimize a state established years ago, and that is Israel; rather we came to affirm the legitimacy of the state that must now achieve its independence, and that is Palestine.

But Israel refuses to listen. Israel insists on being recognized as a Jewish state. Prosor said the words “Jewish state” 11 times during his speech. He did not say “Palestine” once, which accurately represents Israel’s obstinate refusal, still, after 64 years of wrestling with this entity, of recognizing it for what it so obviously is: Palestine. Palestine is of course not yet a state and has no independence. So all it was asking is to be recognized symbolically. And yet Israel – a state with the largest financial aid package from U.S. in the world, the strongest military in the region, and a system that blatantly privileges Jews and claims to have a monopoly over what is Jewish – is crying for its own recognition while refusing it to Palestinians?

This is outrageous. Israel doesn’t need recognition, because everyone already recognized it as such, whether it likes it or not.  Prime Minister Netanyahu has used the “recognition of a Jewish state” card from the start of his term as a precondition for (read: way to avoid) negotiations. This is the reason in fact, why there has been no advancement of talks between the Israeli government and Palestinian Authority in the last four years.<

But Abbas’ emphatic call for a two-state solution, and warning that “the window of opportunity is narrowing” (an optimistic, if unrealistic, assessment) along with his assurance the move does not aim to delegitimize Israel, all constitutes de facto recognition of Israel as a Jewish state. That is his way of saying it. And both his words and action have indicated it, without actually saying it the way Israel demands.  As it is, Abbas has diminishing legitimacy among Palestinians, and has been consistently criticized for running PA forces as a puppet regime serving Israel’s interest or perpetuating the occupation – so forgive him for not following Israel’s demands to a tee.

As Palestinian official Saeb Erekat plainly put it:  “At a moment where the Palestinian leadership is doing every single effort to save the two-state solution, the Israeli government does everything possible to destroy it.”

The next day, after Palestine was recognized by an overwhelming majority of the world, Israel wasted no time and announced that it was going to build 3,000 new housing units in East Jerusalem and the West Bank, as well as defrosting the freeze on an area called E1, east of the settlement of Ma’ale Adumim, deep in the West Bank. This piece of land, 4.6 square miles long, is for the United States, the biggest settlement taboo, the last geographical nail in the coffin of the two-state solution, because it is the last remaining corridor connecting the West Bank to Jerusalem. If this piece of land is settled by Israel, any notion of a contiguous Palestinian state will become a thing of the past. It is why even George W. Bush insisted during his presidency that any building in this area be indefinitely frozen. Then Prime Minister Sharon heeded the demand. 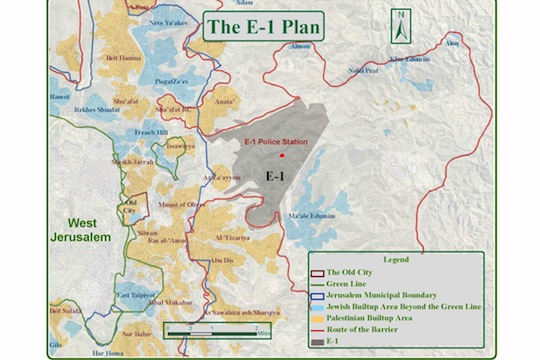 As Ir Amim, an NGO focusing on the implications of the Israeli-Palestinian conflict in Jerusalem, has reported:

At the beginning of 2005, the Ma’aleh Adummim municipality approved two detailed urban plans for the development of the E1 area: one for approximately 3,500 housing units (apartment buildings and villas), and the second for the transfer of the police headquarters. The plan generated harsh criticism from the American government and the European Union.  Both demanded that the plan be frozen, on the grounds that it violated Israel’s commitments according to the ‘Road Map.’ Instead, they maintained that the future of this territory be decided upon by a final status agreement between Israel and the Palestinians. Following this pressure, the Israeli government froze the project in 2004. However, building of the police headquarters was continued on the grounds that, like army bases, the police station would not be seen as creating facts on the ground, but rather as a building that could be removed.

The announcement is a pathetically immature and vengeful reaction by the Israeli government – and couldn’t be more self-defeating. It is a direct affront to a two-state solution, the same solution it consistently claims disingenuously that it so earnestly seeks.  The Palestinian Authority  leader calls for a two-state solution and the Israeli government, by announcing settlement construction, essentially barked back: “No, we want one (apartheid) state!”

What is even more outrageous, is that Israel is doing exactly what it called the Palestinians out for doing when they went to the UN: Unilateralism.  What could be more unilateral than announcing settlement construction on a main stretch of land deep in the West Bank that is considered the last chance for a contiguous Palestinian state?

While the announcement doesn’t currently change anything on the ground as the planning process will take years, on a diplomatic level, due to the sensitivity of the area, it is Israel’s way of saying F you not only to the Palestinians, not only to the United States (its one and only ally, without which it couldn’t exist) – but to itself.  To the very notion of Israel as a Jewish state.

I find myself in an absurd, depressing and enraging reality whereby  I identified with everything Abbas said at the UN , and was horrified (though not at all surprised) with every single word Israel’s envoy said.

Whereas Abbas, in trying to save the two-state solution, is by extension, inevitably trying to save the Jewish state – Israel’s government is doing everything it can to thwart it. It is essentially screaming from the red settlement rooftops: “One segregated state from the river to the sea!” Just don’t say you didn’t know.