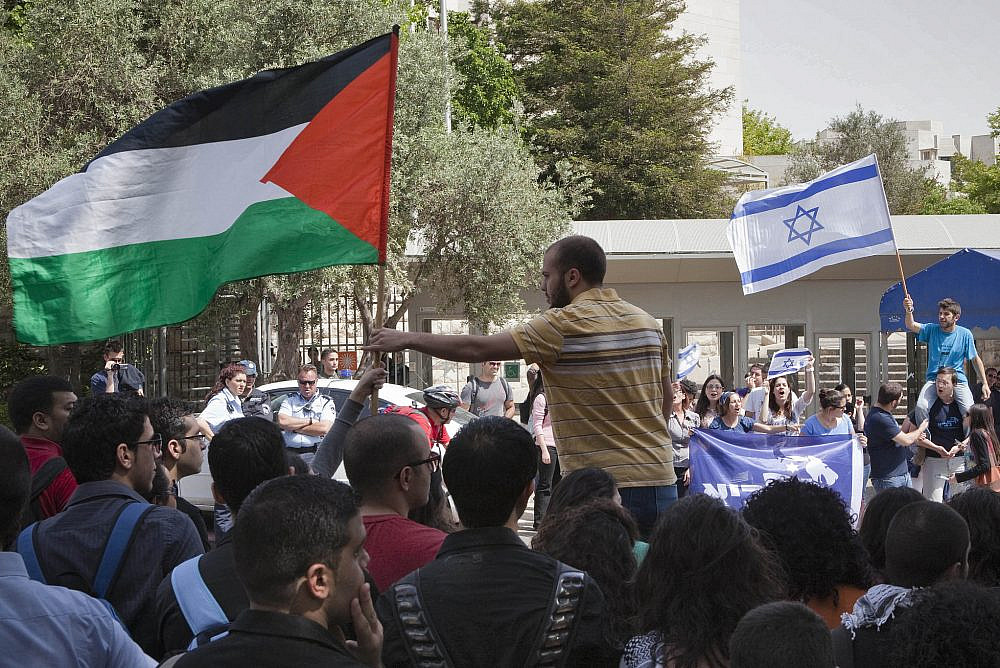 Palestinian students at the Hebrew University of Jerusalem protest a violent escalation that followed Nakba Day, while Jewish Israeli students counter-protest opposite them, May 16, 2011. (Ruben Salvadori/Flash 90)

A recent video clip about the Nakba and the militarization of the Hebrew University of Jerusalem, put together by a left-wing student group, has led to a furious backlash by right-wing groups and politicians who claim the clip incites to violence against soldiers. One Knesset member has called for a criminal investigation, while other actors demanded that the student chapter of the socialist Hadash party, which created and published the video, be shut down.

The video starts out with the message “72 years of the Palestinian Nakba, and the Nakba continues to date,” and presents a timeline of the Nakba. It then makes several claims about the militarization of Hebrew University, including that many soldiers attend the university; that Palestinian students are being removed from campus dorms; and that Israeli snipers are stationed on the roofs of university buildings in order to take shots at protesters in neighboring Issawiya, which has been the site of an extended campaign of police violence.

The video also addresses a controversial army intelligence training program at the university that was launched last year, which grooms undergraduates for an extended stint in the IDF’s intelligence unit, and which has seen a sharp rise in the number of uniformed, armed students attending classes on campus.

The aim of the video, explains Shirin Hamad, a second-year undergrad at the university and a member of the Hadash student group, was “to present the point of view of Arab students at the Hebrew University. We wanted to show what we experience on a daily basis. When we saw police officers on the roof of the university (surveilling East Jerusalem’s Issawiya – O.Z.), it was very frightening, it makes every Arab student feel threatened. Academia also needs to fight the occupation.”

According to Hamad, the university administration has not made a serious effort to consider why Arab students, as well as some Jewish students, are fearful when they see uniforms and weapons on campus. “I think they don’t understand, they see soldiers as protectors and not a threat,” she says.

Right-wing organizations have zeroed in on the fact that soldiers’ faces in the video aren’t blurred, claiming that the clip therefore represents an attempt to harm the soldiers. Following the publication of the video, Israel’s Army Radio reported that soldiers at the university would receive increased security. Following a request by the university, the Hadash student group uploaded a new version of the clip with soldiers’ faces blurred.

Yassin rejects the suggestion that showing soldiers’ faces encourages attacks against them. “There was no call to harm soldiers,” he says, adding that Hadash “fights for the good of both peoples, for the Palestinian people but also for human rights in Israel that have been trampled by a militaristic discourse.” 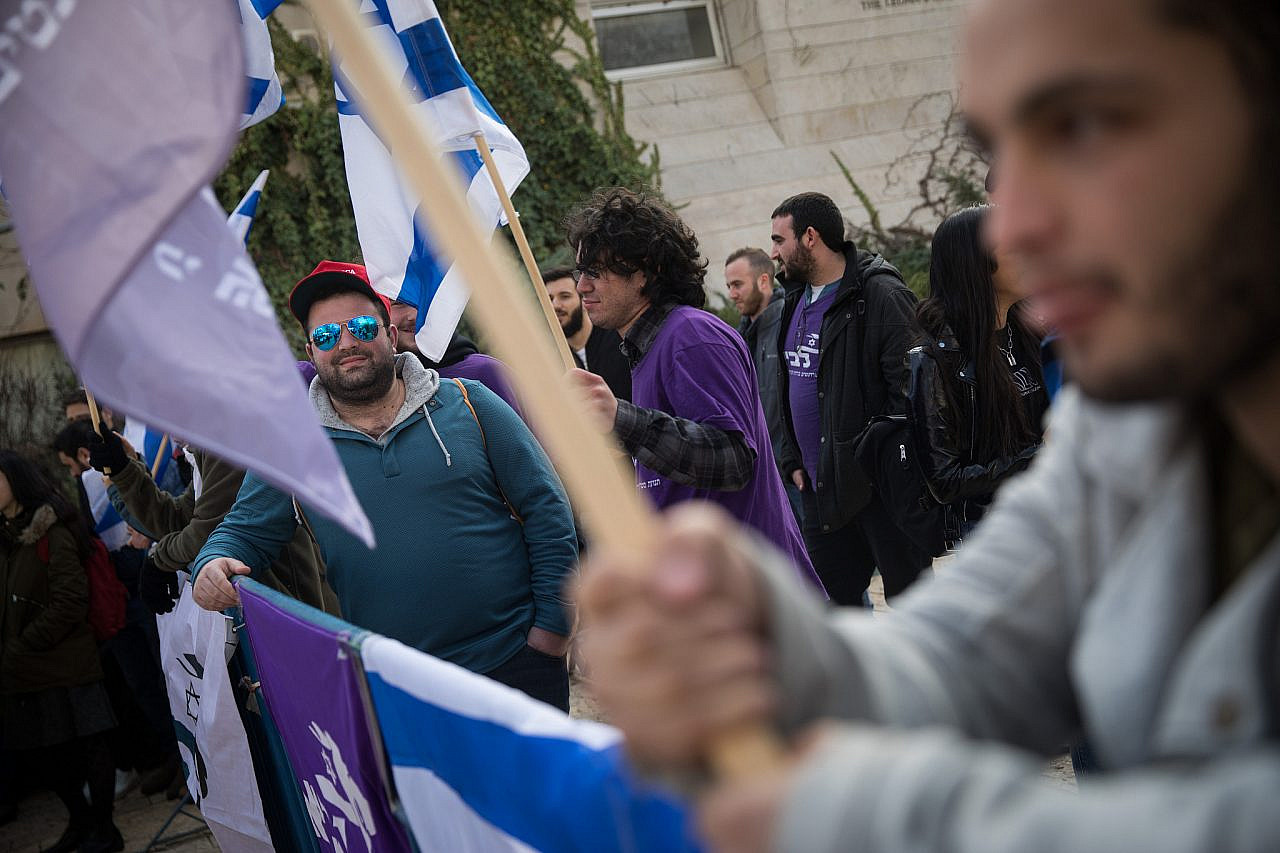 Right-wing students protest against a lecturer at the Hebrew University of Jerusalem, on January 8, 2019. Photo by Hadas Parush/Flash90

MK Ofir Sofer of the right-wing Yamina party submitted a complaint to the attorney general, demanding he investigate the creators and distributors of the video. Meanwhile, a number of right-wing and center-right student groups, including Im Tirtzu and student associations affiliated with Likud and Blue and White, have called on the Hebrew University to respond forcefully against the Hadash students and to show support for soldiers on campus.

Ofek, the student group associated with Israel’s Labor Party, condemned the video for being “liable to be interpreted as a call to harm groups of student soldiers,” while at the same time expressing a desire to establish “genuine partnership” with the Hadash chapter. The Hebrew University Student Association expressed its openness to hearing criticism and differing views, but criticized the “marking of ordinary students and the call for violence or incitement against them.”

The university responded that police photographers, rather than snipers, are stationed on the institution’s roofs. The university further claimed that “no Arab student has been evicted from the dorms,” and that when students switch accommodation on a yearly basis, some Arab students move into a new dorm. But Tareq Yassin, Hadash’s national student coordinator and a graduate student at the Open University, claims otherwise.

“They’re denying facts known to every student,” he says. “The entire lower level of one of the dorms is empty, they threw out the students a month before their exams. I personally know of several students who were pressured to leave their accommodation without being offered replacement housing, and this year they moved to private apartments.”

Yassin adds that electronic gates and armed security guards have been placed outside the dorms, resembling a “military base.” He further notes that the allocation of space for soldiers’ quarters has added “hundreds of soldiers to campus” as well as additional police, and that this has created the sense that the university is involved in “the repression of the Palestinian people, especially in light of [the campus’] location next to Issawiya.”

Hamad also confirms that students were ejected from their dorms last year. “In July last year, during finals week, they sent a message that you need to leave the dorms the following week,” she recalls. “Many students came to us and complained, asking why, even though the university told them it was to allow for urgent renovation, after a month-and-a-half it became clear that the real reason was to make way for an army intelligence training program.” Hamad adds that another wave of students was moved out of the dorms in January this year. 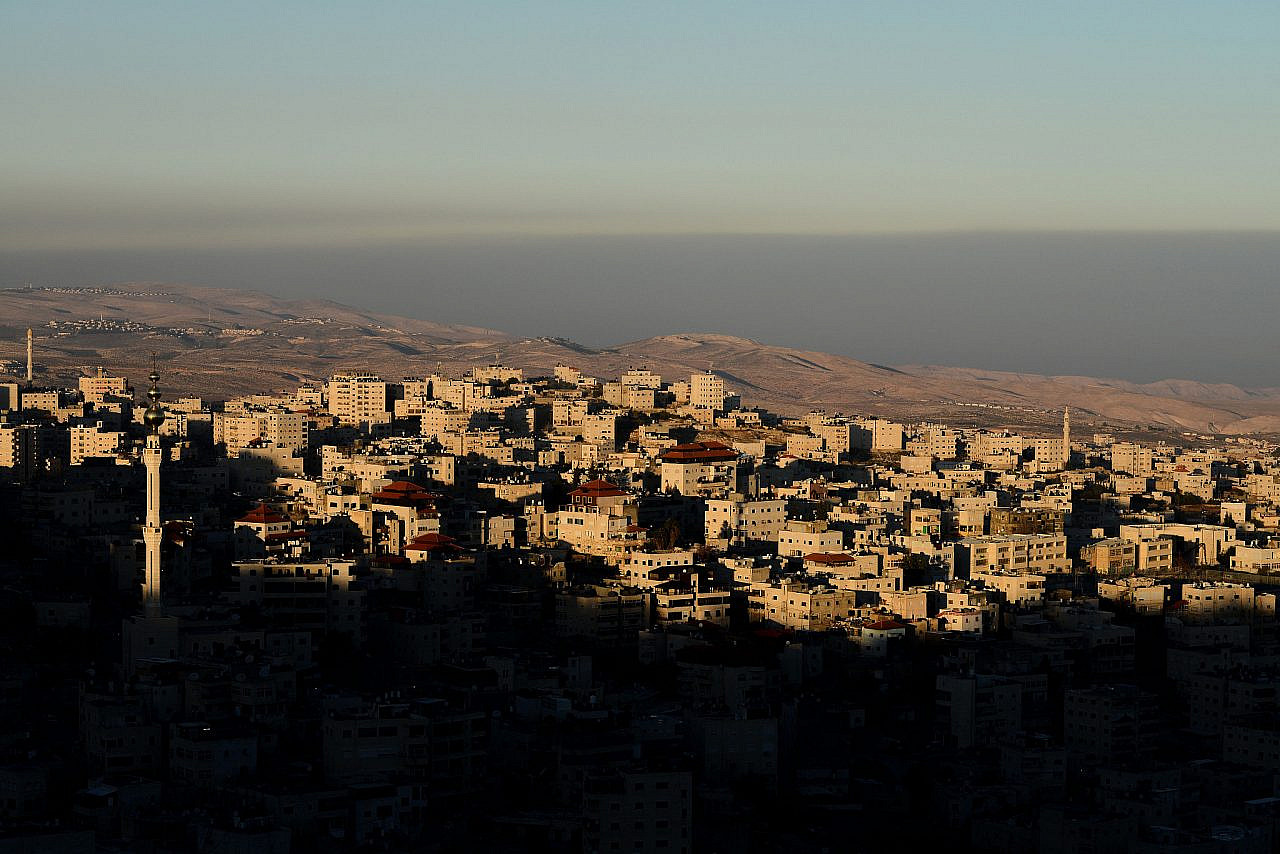 View of the East Jerusalem neighborhood of Issawiya as seen from the Hebrew University of Jerusalem, on Mount Scopus, January 8, 2018. (Mendy Hechtman/Flash90)

A lecturer at Hebrew University who asked to remain anonymous said that the number of armed soldiers on campus has increased since the army intelligence training program began last year. They further noted that some student accommodation had been cleared for the benefit of the program. Palestinians make up a relatively high proportion of dorm residents, meaning that they have been disproportionately affected by the assigning of student housing to soldiers.

Academia for Equality, an activist academic group, and New Profile, a feminist organization that works to end militarism in Israeli society, published a joint letter expressing support for Palestinian students battling the “militarization” of their campus. The letter points out that contrary to the university’s claims, Palestinian students were indeed moved out of dorms that were subsequently assigned to soldiers.

The letter also highlights the impact of the army intelligence program, arguing that the university “needs to remain a civilian institution,” and that it has a responsibility to safeguard Palestinian students who “feel threatened by the military atmosphere taking over” the campus.

Responding to a request for comment, the Hebrew University stated that “the original film was taken offline following the university’s request to the Hadash chapter. The film, which was circulated on social media, made false statements about the university… Students from all corners of Israeli society are secure and free — starting with IDF soldiers in the military’s most prestigious program, Arab students, ultra-Orthodox students, and so on.

“The desire to portray the campus as an unsafe environment is entirely false. The film does not represent the views of the university and its administration, but rather those of the Hadash chapter alone.”