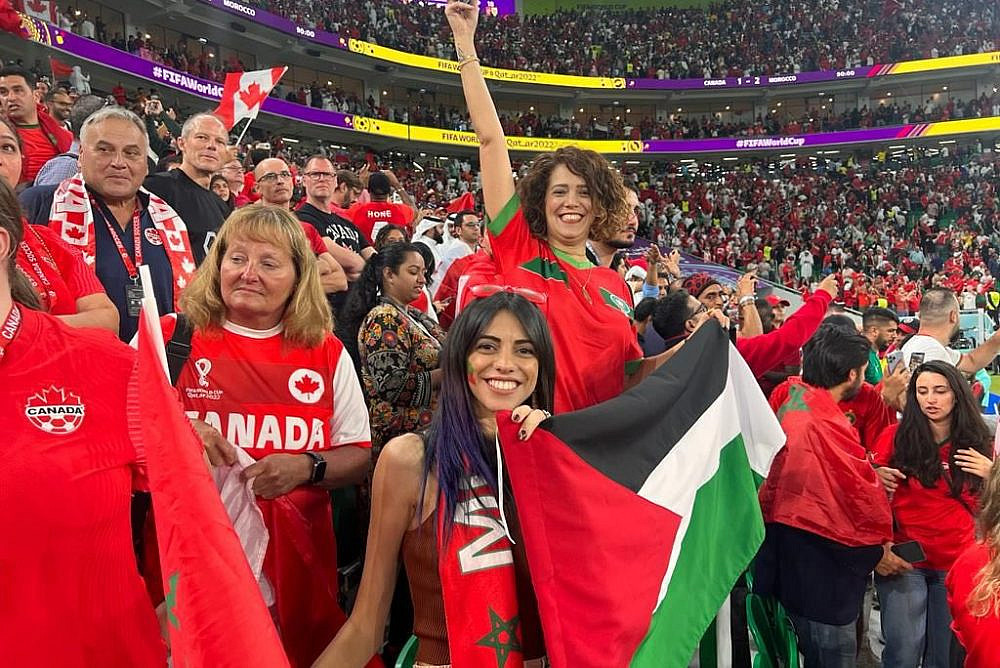 “The atmosphere in Qatar is something that happens once in a hundred years. It’s a dream that came true, an Arab dream. Palestinian flags are everywhere — in the stadiums, in the markets. Wherever you go, you will meet Qataris dressed in traditional garb with a Palestinian flag in their hand or draped over their neck. Even the South American fans are coming to take photos with us and say ‘Viva Palestine.’”

This is how Maha Ighbaria, a Palestinian political activist from the city of Umm al-Fahm who traveled to Qatar for the soccer World Cup festivities, described her experience. Her remarks reflect what Palestinians across Palestine and around the world, young and old, are calling the “Palestinian World Cup.”

Palestinians have been united in supporting the Arab national teams, including Saudi Arabia, which in recent years has not been popular among Palestinians. The achievements of Arab and Muslim teams — from Morocco to Saudi Arabia to Tunisia to Senegal — strengthened the feeling of unity. But more than that, it is clear that this World Cup has returned the Palestinian issue and people to the forefront of the Arab world, after years of decline and a general sense of isolation.

Everyone, of course, is celebrating the fact that Palestinian flags are being raised at stadiums by fans of the Arab national teams. But what has equally warmed the hearts of many Palestinians are the viral videos that have filled social media since the tournament began, showing people’s responses to Israeli journalists in Qatar. Fans from across the Arab world and beyond have raised the Palestinian flag or refused to be interviewed when they discovered the reporter was Israeli, reminding the Israeli media that they are unwelcome strangers in the Arab world — even after believing that the Abraham Accords would magically render their presence acceptable and legitimate in the region.

“There is no doubt that this World Cup is the Arab World Cup,” Knesset member Ahmad Tibi, chairman of the Ta’al party, and an avid soccer fan, told +972. “The respectable performances of the Arab national teams brought us pride. The presence of Palestine was strongly felt in every stadium, the flag of Palestine was waved everywhere. After [years] in which the feeling that the Palestinian issue was less of an issue among the Arabs, the [Arab] people made clear that this issue is the central one for the entire Arab nation.”

‘A feeling we did not know before’

Tibi also referred to the “brazen behavior” of Israeli reporters who were “disappointed” by the hostility against them. “The Israeli journalists behaved arrogantly and tried to push the microphone onto people, expecting to be greeted with roses and hugs. But the people hate the occupation and the occupiers. There is a lot of hypocrisy in the anger of the Israelis [at how they are treated], because they forget how Israel behaved and behaves vis-à-vis Palestinian journalists, from cursing to physical attacks, while not a single Israeli journalist has been attacked in Qatar.”

While Yedioth Ahronoth, one of Israel’s most popular daily newspapers, called the tournament the “World Cup of Hate,” Tibi called it the “World Cup of freedom, the World Cup of Palestine and the Arabs.” It is impossible, he said, to separate politics from sports. “The world, which excluded Russia from sports competitions due to the occupation of Ukraine, embraces Israel, which is responsible for the longest occupation in the world. Germany, which tried to suppress [former national team player] Mesut Özil because he showed solidarity with the oppressed Uyghur Muslims in China, criticizes Qatar on the issue of [its treatment of] homosexuals. This World Cup exposed those who hold double standards.” 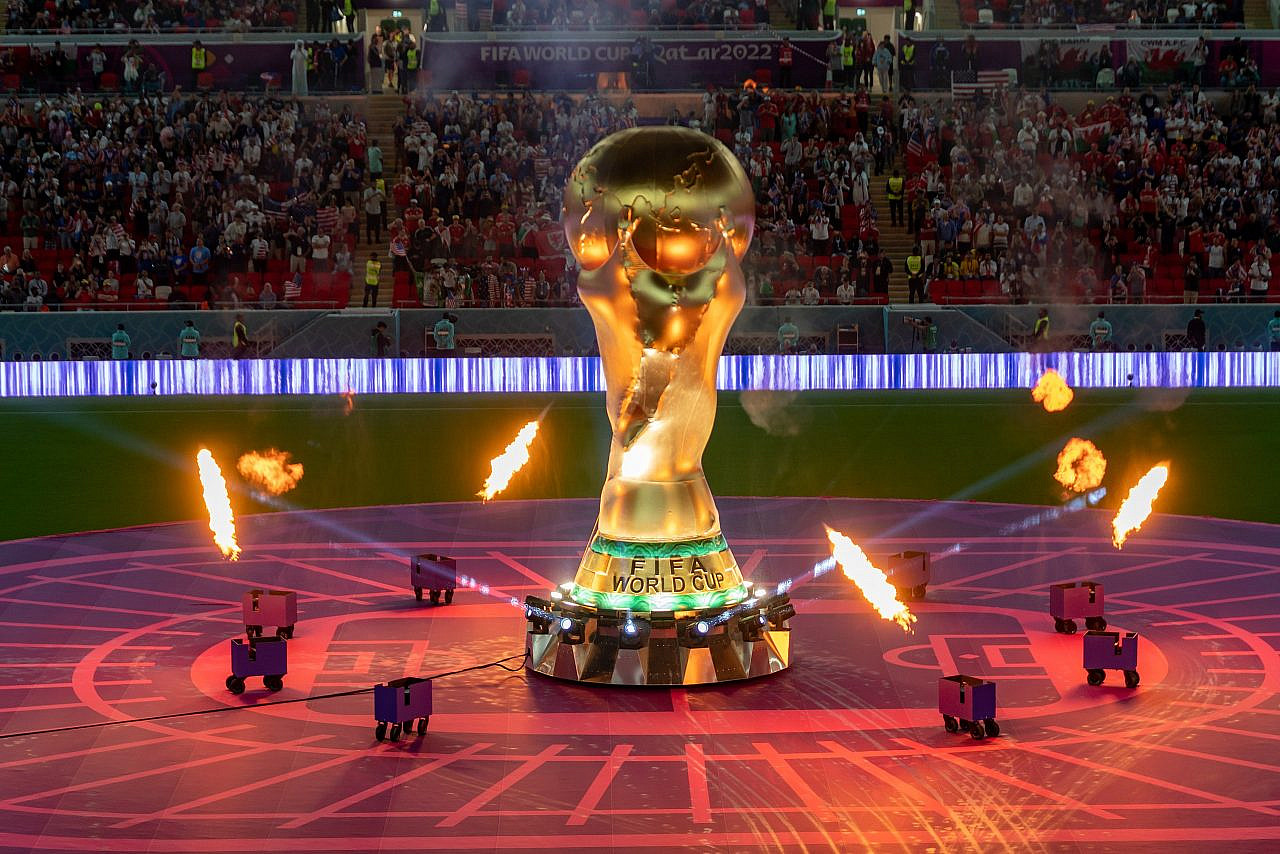 Ighbaria, who has been in Qatar since the beginning of the World Cup, noted that most of the fans who came to the country are from Arab countries or South America, in contrast to most previous World Cups which are usually dominated by European fans. “The white people from Europe mostly boycotted,” she said. In her eyes, this is actually a positive phenomenon, because the “so-called superiority of the whites over the Arabs” was absent from Qatar.

The Israeli journalists, claimed Igbaria, “did not respect the place they were in, neither Qatar nor the Arabs. They couldn’t believe their eyes when they saw how hated they are in Qatar. The funniest and most pathetic thing is that they are somehow surprised. You are an Israeli, you are occupying and oppressing another people for decades, murdering them in cold blood, committing crimes against humanity — how on earth are you surprised? Is it because the dream of normalization crumbled before your eyes? Qatar is not the United Arab Emirates.”

But for Ighbaria, the most powerful aspect was the ability for her, as a Palestinian citizen of Israel, to break the barrier of loneliness she feels. “There is a feeling of unity that we always dreamed of and talked about, and was very far from coming true,” she explained. “We, the Palestinian citizens of Israel, experience a disconnect with the Arab world, [but] suddenly we are here among our brothers waving the Palestinian flag.”

“Qatar gave us a feeling we did not know before,” she continued. “The Palestinian flag is present along with all the flags of the participating countries, as if Palestine is the 33rd country in the World Cup. We’re meeting people from all across the Arab world, and they all embrace us. It’s hard to put into words.”