Jerusalem Day is not a celebration of a unified city, but rather a show of Israeli power, a reminder for the Palestinians that Jerusalem is an occupied city where non-Jewish residents don’t count.

Every year, Jerusalem Day brings a depressing shadow over East Jerusalem. While Israelis celebrate the “liberation” of the city, Palestinians mourn the beginning of a long journey of oppression and occupation. On Jerusalem Day, tens of thousands of Israelis right-wing activists are allowed to parade in the streets, Palestinians are told close their shops, remain in their homes and not bother the celebration.

An announcement distributed by the police in East Jerusalem requested that shop keepers (voluntarily) close down their shops by 5 pm on Sunday. The same document requires that all products viewed outside the shop be removed by 4 pm. The justification for these requests is justified by an attempt to “reduce potential tension” between the shop keepers and people “celebrating.” However as usual, the cost of reducing tension is paid for by the Palestinian residents of East Jerusalem. 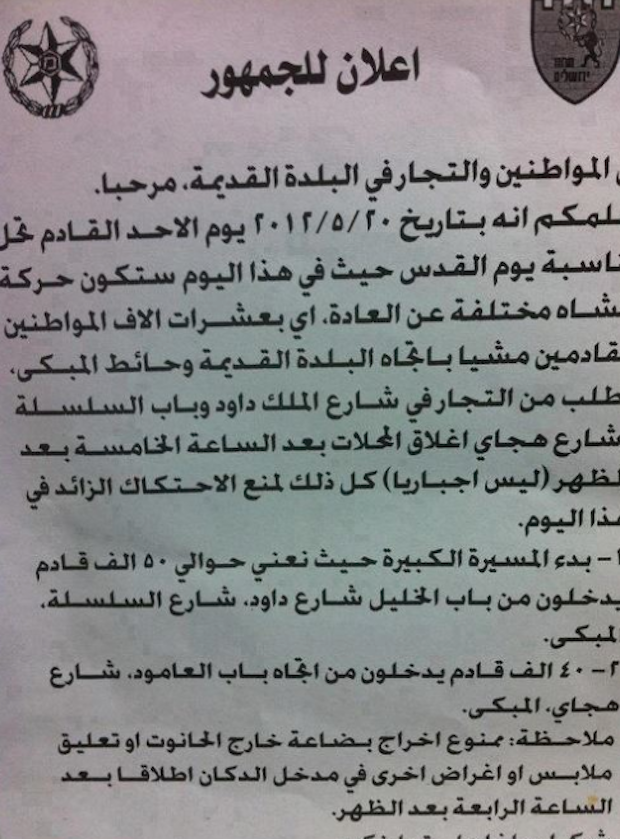 Every year’s celebration of Jerusalem Day is full of provocation and attacks on the local Palestinian population. In the video below, you can see an example of what happens. First comes the famous slogan “Mavet Le’Aravim” (Death to Arabs), then physical attacks such as stone throwing. The police often tries to calm things down but Palestinians are often arrested even if beaten by the extremist marchers.

Imagine for a moment that Palestinians decide to celebrate their heritage in West Jerusalem and march through Jaffa and Ben Yehuda streets! Would they be given full police protection? Would the police dare to ask shops in West Jerusalem to close their doors to reduce tension?

I remember a few years ago I was in West Jerusalem when the “celebration” of Jerusalem Day started. Somehow, I forgot that I was supposed to return home early on that day to avoid harassment. Everyone knows you shouldn’t be on the streets on this day if you are a Palestinian, but I screwed up. The streets were closed to cars so I had to walk towards East Jerusalem only to be stopped by a policeman. After he checked my ID, frisked me, and asked a few questions he told me that I cannot walk to East Jerusalem. How pathetic, I thought. You are celebrating the unification of Jerusalem but you are stopping me from crossing the street to my home?

“There is a celebration and you are not allowed there,” he told me and then tried to convince me that it was for my own safety that he is preventing me from walking home.  So, I had to spend my evening sitting on the road in West Jerusalem unable to go home because this is the day that Israel celebrates Jerusalem as its “undivided” capital. Yet, I am being told to believe that I have equal rights, to believe that there is no difference between me and a Jewish resident of Jerusalem.

Jerusalem Day is not about a unified city but is about a show of power. It is a reminder for the Palestinians that Jerusalem is an occupied city where non-Jewish residents don’t count. Jerusalem Day is a sad day because Jerusalem ought to be a city of peace and not of conflict. Perhaps it is appropriate to end this post with this Psalm for the peace of Jerusalem:  “May those who love you be secure.” 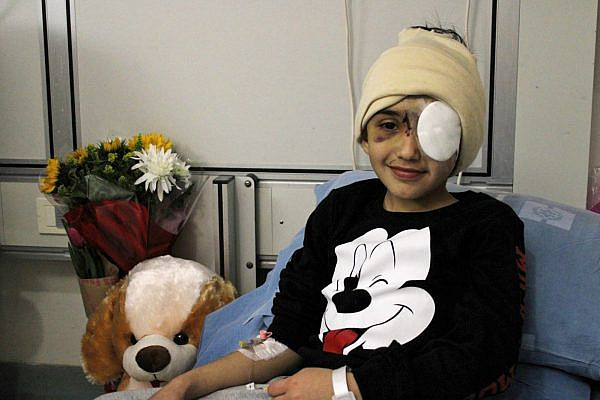