The small village is located in E1, an area in which the U.S. and Europe have long demanded Israel not build new settlements, because doing so would cut the West Bank in two. 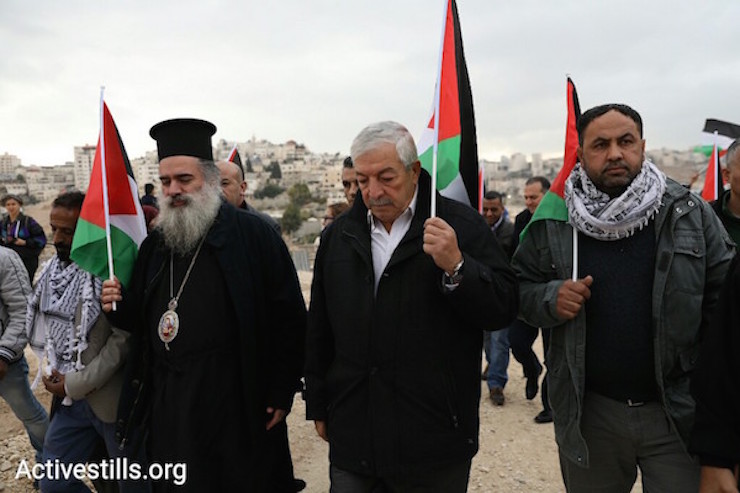 Representatives of the Palestinian Authority and Bishop Atallah Hanna from the Greek Orthodox Church took part in the protest by residents of Jabal al Baba against their expulsion. November 23, 2017 (Oren Ziv/Activestills)

Around 100 demonstrators  joined the Palestinian community of Jabal al-Baba on Thursday, November 23, in the E1 area of the West Bank adjacent to the Israeli settlement of Maale Adumim, to protest a new Israeli-military order that would displace the entire community. On November 16, members of the community received the military order to leave their homes and take with them all of their belongings—the first step in the eventual demolition of their homes. Thursday was the day they were supposed to leave, according to the order.

The West Bank area known as E1, where Jabal al-Baba is located, is the site of an Israeli plan to build several thousand settlement housing units. For over a decade the United States and European Union have demanded that Israel halt the project, which would connect annexed East Jerusalem with the settlement of Maaleh Adumim, thereby making a geographically contiguous Palestinian state all-but impossible.

The demonstrators were joined by members of the Palestinian Authority, the popular committees, and Bishop Atallah Hanna of the Greek Orthodox Church. They marched from the village to a nearby hill, surrounded on one side by Jerusalem and the settlement of Maale Adumim on the other, where they placed a Palestinian flag.

The community consists of 60 families, or more than 280 people, 151 of whom are children. Residents of the community, members of the Jahalin Bedouin tribe, released a statement declaring that they do not intend to comply with the military order. They called on the public to support their struggle. 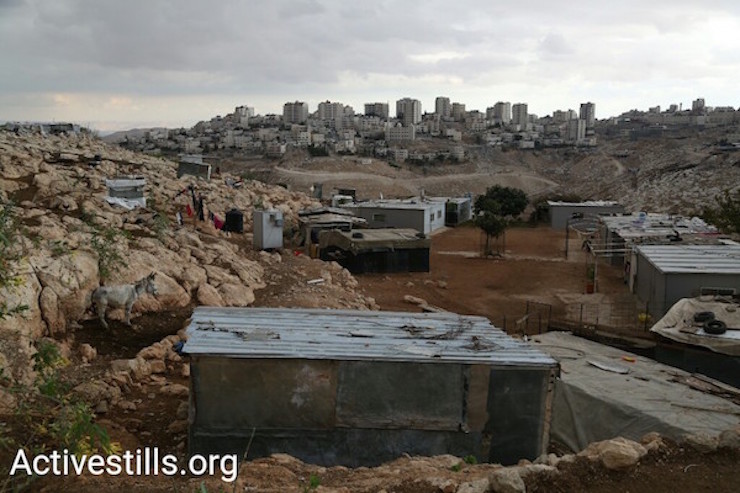 Rain clouds above Jabal al Baba. In the background, the Palestinian neighborhood of Azaria. (Keren Manor/Activestills)

Since the beginning of November, similar evacuation orders have been issued against the villages of Ein al-Hilweh and Umm Jama in the Jordan Valley. 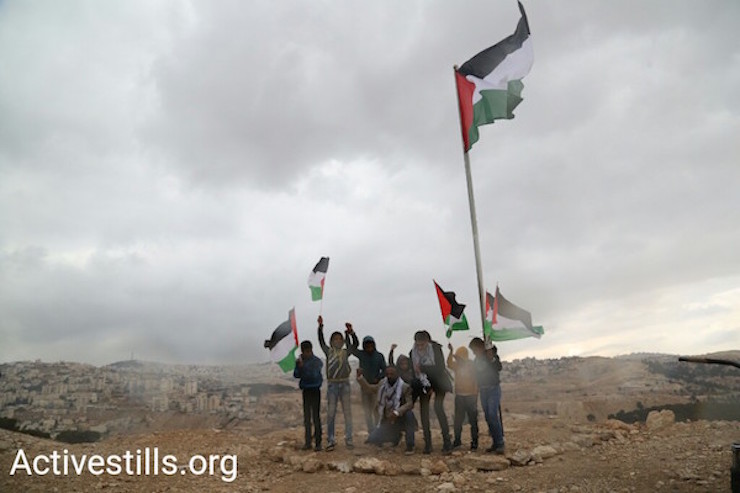 So far in 2017, the Israeli military has demolished 349 Palestinian-owned structures, and displaced 542 people, including 302 children, according to data collected by the UN Office for the Coordination of Humanitarian Affairs.

The Israeli army recently declared plans to demolish one-fifth of the buildings in the Palestinian village of Susiya, located in the South Hebron Hills, within two weeks. “As winter arrives, the imminent demolition will leave 100 people, half of them children, without shelter, said Attorney Quamar Mishriqi-Assad, who is representing the villagers of Susiya.”This is contrary to Israel’s obligations under international law.”

The residents of Susya have for years been fighting in court for the right to stay on their land. The village’s residents were first expelled from their lands in 1986 after the Jewish settlement of Susya was established and an archaeological site built on its former location. The Palestinian villagers then moved the village to their adjacent agricultural lands and have been fighting to subsist there ever since.

The Israeli army has issued repeated demolition orders in the village on the basis of illegal construction and zoning. Residents are currently in the middle of a court process demanding that the army legalize their village. 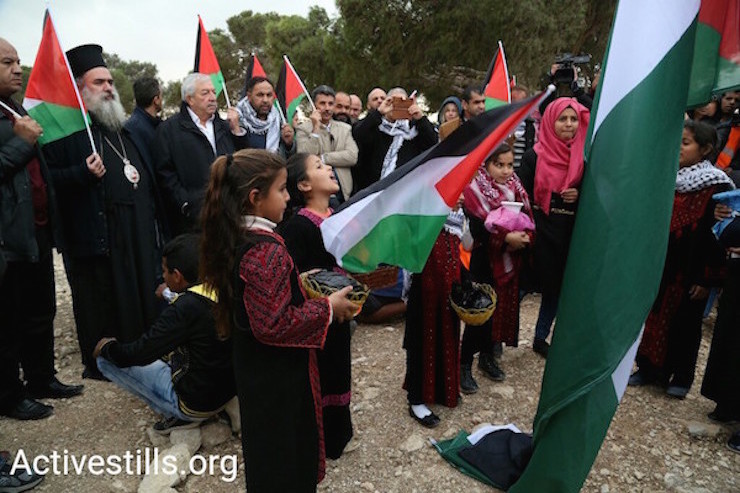 Protesters against the expulsion of Jabal al Baba. (Keren Manor/Activestills) 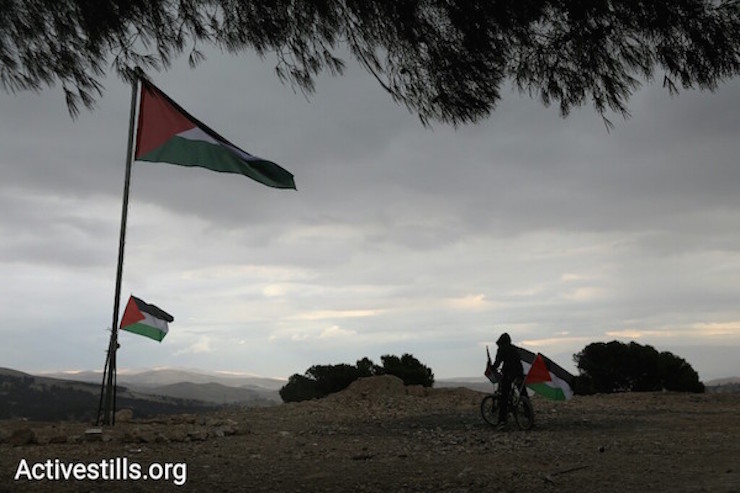 A Palestinian flag flies after the protest. Jabal al Baba. (Oren Ziv/Activestills)
Get Our Weekly Newsletter

emailemailemail
Before you go…
A lot of work goes into creating articles like the one you just read. +972 Magazine is nonprofit journalism, owned by many of our writers, editors, and journalists. In order to safeguard that independent voice, we are proud to count you, our readers, as our most important supporters. With your support, we can keep +972 Magazine a strong, independent, and sustainable force helping push the global discourse on Israel/Palestine.
DONATE
More About maale adumim 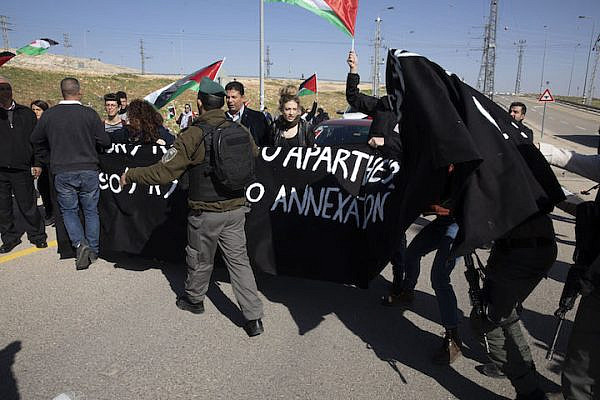 Activists shut down traffic on new West Bank ‘apartheid road’
Activists say the highway, which separates Israeli and Palestinian traffic with an 26-foot concrete wall, will ‘strengthen Israeli rule, including by shutting out entire Palestinian areas.’ Dozens of Palestinian, Israeli, and international activists Wednesday morning blocked a highway many have dubbed the “apartheid road,” Route 4370 in the occupied West Bank, which separates Israeli and Palestinian…
By Oren Ziv January 23, 2019 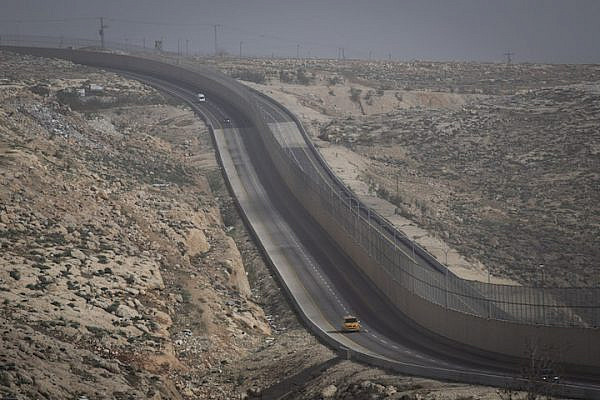 Israel’s new ‘apartheid road’ is about more than just segregation
Israel claims the new road, which separates Israelis and Palestinians by an eight-meter wall, alleviates traffic for settlers while helping Palestinians travel around the West Bank. Human rights activists say it will help create Israeli-only enclaves free of any Palestinian presence.  Israel unveiled a new segregated highway in the occupied West Bank last week, with a giant eight-meter…
By Edo Konrad January 16, 2019 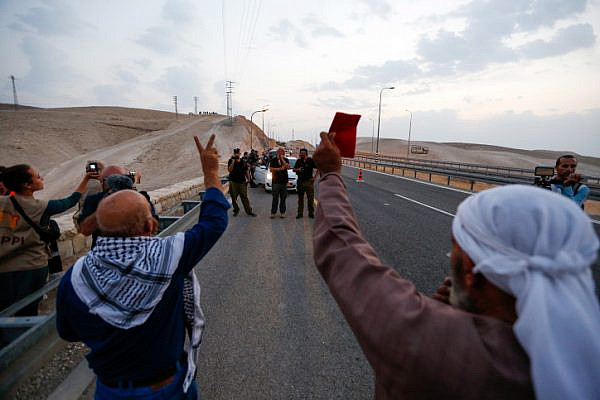 Activists dig in ahead of Khan al-Ahmar demolition
Israel may demolish and evict the Palestinian-Bedouin community any day now, and activists are maintaining a presence there until it does. Israeli forces demolish a small, protest camp that was erected earlier in the week. By Oren Ziv An Israeli High Court injunction preventing the forced displacement and demolition of the Bedouin community of Khan…
By Oren Ziv September 13, 2018