Building thousands more settlement units all over the West Bank and East Jerusalem is in no way comparable or proportionate to the release of Palestinian prisoners. The construction of more settlements is equivalent to the annihilation of a two-state solution and the preemption of any kind of faith-building measures. 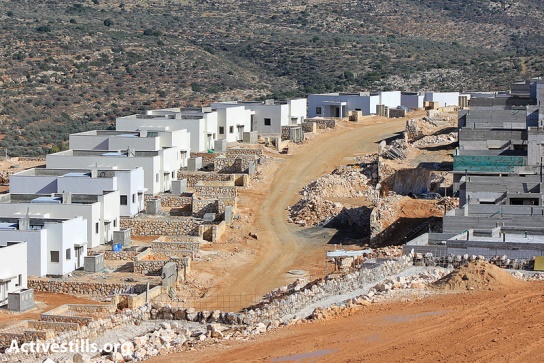 The announcement Sunday that Israel’s housing minister has approved construction of 1,200 new settlement units in the West Bank and East Jerusalem should be no surprise. It comes just a few days after the Civil Administration announced 878 new housing units in the West Bank. In fact, Israel’s approval of new settlement construction is the one new concrete development on the ground since Kerry announced the resumption of negotiations on July 19.

Something like 2,000 new units in the West Bank and East Jerusalem – some in final approval stages before building begins and others at the start of the tender process – have been announced in the last few weeks. The construction published today enumerates 400 new units in Gilo, 210 in Har Homa and 183 Pisgat Ze’ev — all settlements beyond the Green Line in East Jerusalem. In the West Bank,it was made up of 117 units in Ariel, 149 in Efrat, 92 in Ma’aleh Adumim and 36 in Beitar Ilit.

While the new units are mostly part of “consensus settlements” – meaning areas that are presumed to remain part of Israel in any two-state solution – it is important to remember that the only reason they have become so is because of U.S. and international complacency in Israeli settlement building over the years. There is no logical or legitimate reason for places like Ariel, deep in the West Bank, and Har Homa, a relatively new but highly controversial settlement that cuts Bethlehem off from Jerusalem, to remain part of Israel in a future agreement.

The tandem news headlines of “peace talks to resume” coupled with “new Israeli settlements announced” are ridiculously insulting. How can anyone take these talks seriously? It is as if Israel was waiting patiently for the U.S. to announce peace talks before it could fling the settlement floodgates wide open; there was actually more restraint in the last year, with a de facto settlement freeze in East Jerusalem.

Despite its formal statements of condemnation, the U.S. clearly has no problem with the new settlement construction, since it is not doing anything to stop it. According to Ma’ariv‘s report Sunday morning, a U.S. official said that Israel notified the administration of this new round of settlement plans, presenting it as a carrot and stick deal in which the carrot is settlement building, and the stick is releasing Palestinian prisoners.

But how can more construction in what is slated to be a future Palestinian state constitute a carrot? Building thousands more settlement units all over the West Bank and East Jerusalem is in no way comparable or proportionate to the release of Palestinian prisoners. Approving more settlements is equivalent to the annihilation of a two-state solution and the obliteration of any kind of faith-building measures. And releasing Palestinian prisoners is primarily symbolic – considering that Israel remains the controlling power, choosing who and when it releases and re-arresting as it pleases, whenever it pleases.

The disingenuous nature of Israeli actions and the nerve of U.S. passivity is at times hard to comprehend. How can anyone take any of it seriously? Instead of building settlements, as the occupier, Israel should be building trust. If Israel wanted to show a modicum of genuine interest in moving towards a solution with the Palestinians — or if the United States was serious about compelling it to do so — the first thing it should carry out one single act to relieve the basic human rights violations in the occupied West Bank. At this point, even a really really small act could make a big difference.

Like, how about the Civil Administration refrain from destroying water cisterns in the Palestinian village of Susya and allow residents to access their water? Is that too much to ask? Would that undermine the “peace process?” Or how about opening Shuhada Street in Hebron to Palestinians? How about ceasing to conduct night raids in the homes of Palestinians who are non-violently protesting occupation. Or how about this crazy thought? Instead of releasing some prisoners, how about ending the military system under which Palestinians can be arrested and imprisoned without trial for years on end?

That would be too much. In the theatrical charade that is the 2013 “peace talks,” Israel has found the perfect equation: continue exactly as before, but this time, settlements aren’t even considered a hindrance, they are rather, the carrot.