This week: Border Police bloopers in Bil’in, asylum seekers in Tel Aviv, Palestinian activists launch campaign in the Jordan Valley, anti-Arab graffiti in Silwan, ultra-orthodox Jews against the draft in Jerusalem, a far-right politician hands out award for McCarthyism in Israeli schools, and solidarity outside Holot ‘open’ detention center. 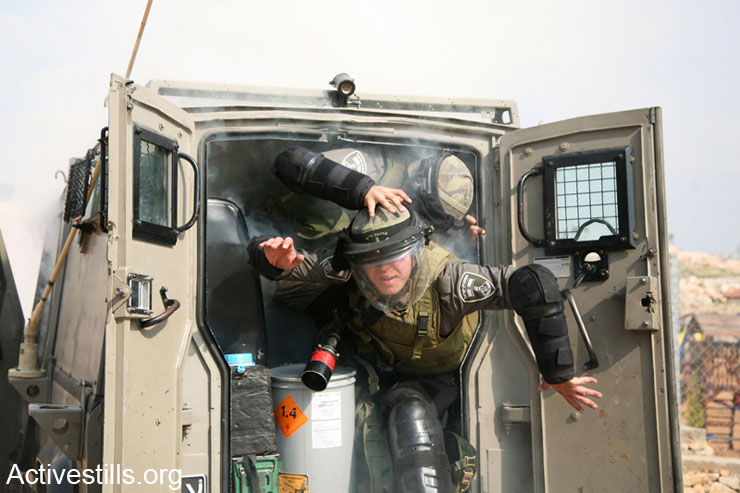 Israeli Border Policemen jump out of their jeep after a tear gas grenade unintentionally exploded inside it, as they were trying to disperse the weekly protest against the Israeli wall in the West Bank village of Bil’in, February 7, 2014. (photo: Hamde Abu Rahma/Activestills.org) 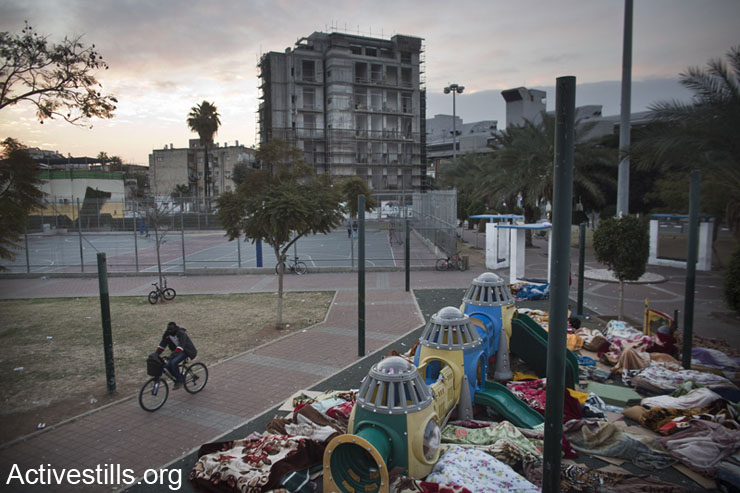 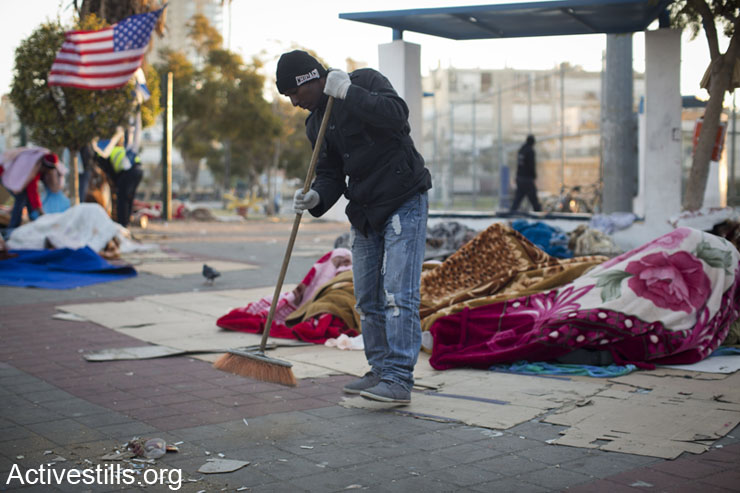 An Eritrean Asylum seeker sweeps the ground, after spending the night in Levnisky park, South Tel Aviv, on their eighth day of an ongoing protest, during the early hours of February 9, 2014. (photo: Oren Ziv/Activestills.org) 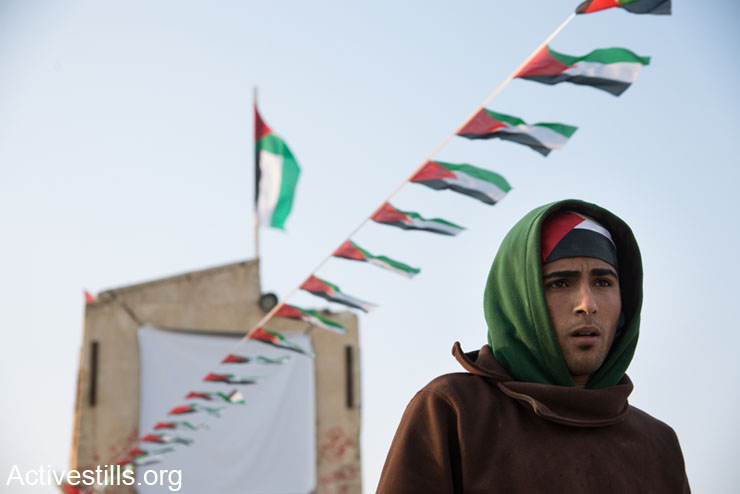 A Palestinian youth stands among the buildings of the Jordan Valley protest village of Ein Hijleh, West Bank, February 6, 2014. As part of its Melh Al-Ard (Salt of the Earth) campaign, the Palestinian Popular Struggle Coordination Committee began to restore and occupy abandoned homes in Ein Hijleh to protest the ongoing Israeli annexation of the Jordan Valley. (photo: Ryan Rodrick Beiler/Activestills.org) 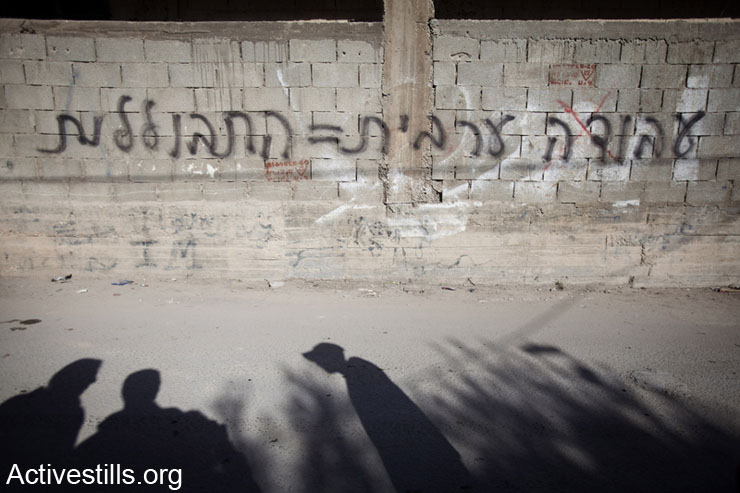 A ‘price tag’ graffiti is seen sprayed on the wall of a Palestinian house in the Silwan neighborhood of East Jerusalem, February 10, 2014. The graffiti reads: Arab labor = assimilation.’ (photo: Tali Mayer/Activestills.org) 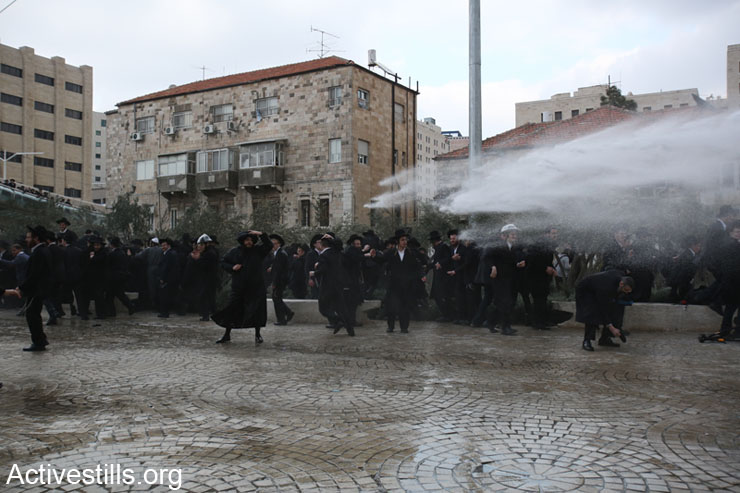 Ultra-Orthodox Jews take cover as an Israeli police water canon sprays the crowd under the Chord Bridge at the entrance to West Jerusalem, during a protest against drafting ultra-Orthodox Jews into the Israeli military, February 6, 2014. Several thousand Haredi Jews protested in Jerusalem and other cities after an ultra-Orthodox young man was arrested for dodging the draft. Police used water canon, horses and physical force to break up the protest. (photo: Tali Mayer/Activestills.org) 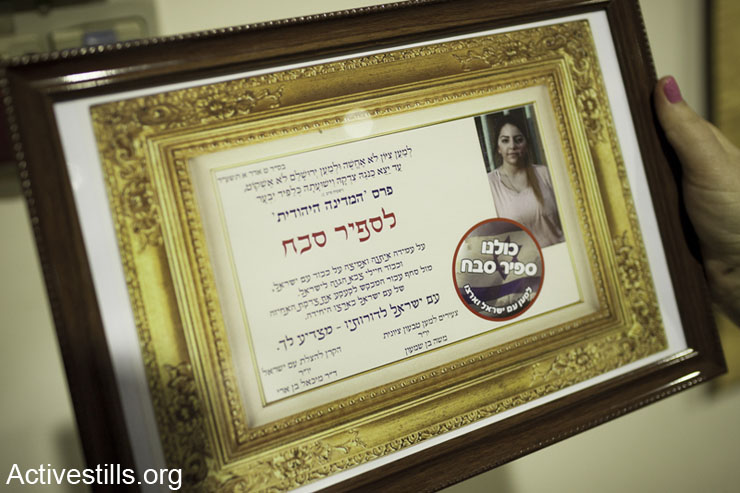 The “Jewish State Award” is given to Sapir Sabah during a ceremony organized by former MK Michael Ben-Ari, Israel, February 9, 2014. Sapir Sabah is a high-school student who publicly denounced her teacher, Adam Verete, for questioning the morality of the Israeli army’s actions in class. The award ceremony was attended by far-right activists Itamar Ben-Gvir, Baruch Marzel and their followers. (photo: Activestills.org) 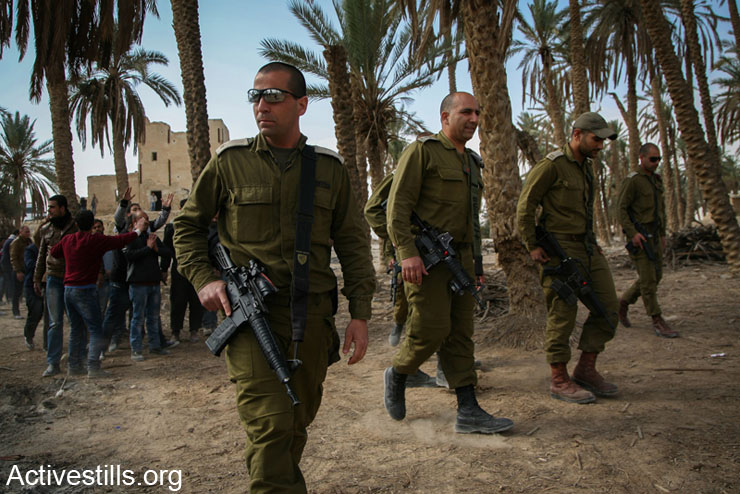 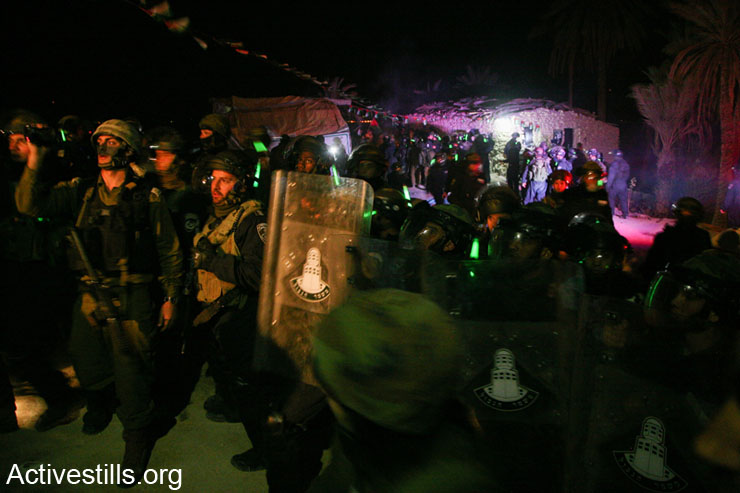 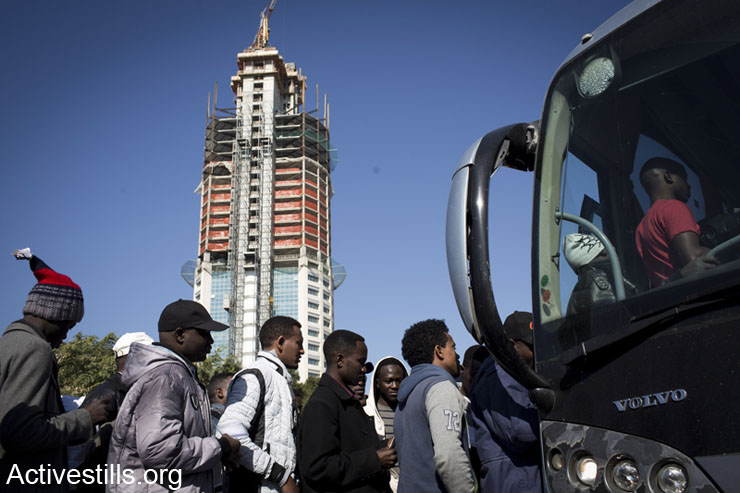 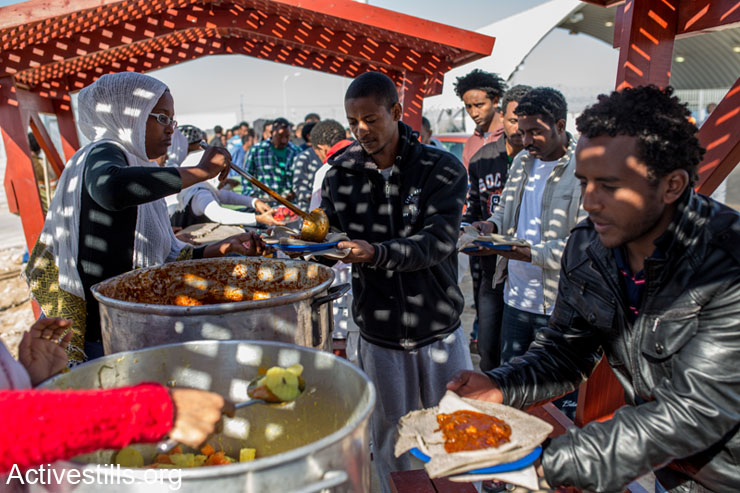 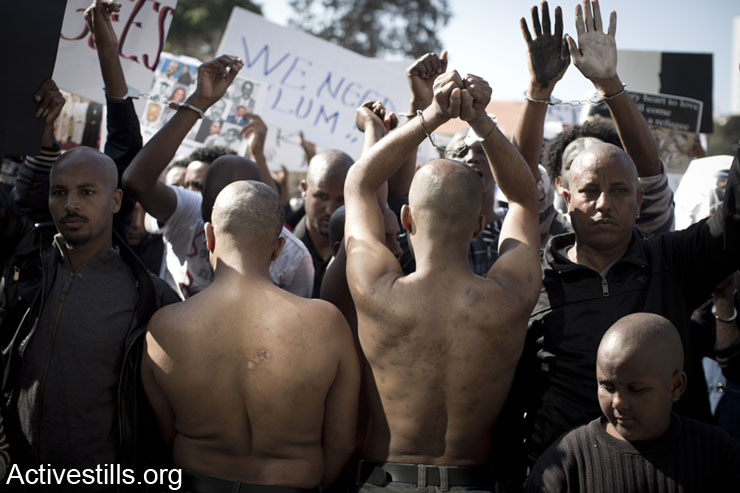 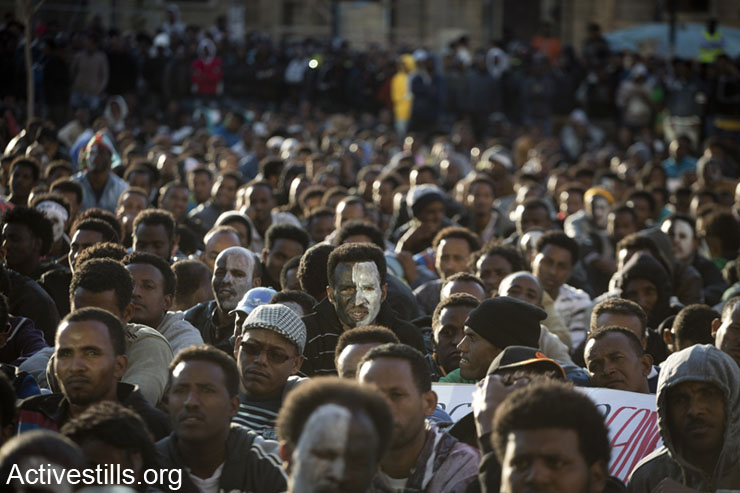 emailemailemail
Before you go…
A lot of work goes into creating articles like the one you just read. +972 Magazine is nonprofit journalism, owned by many of our writers, editors, and journalists. In order to safeguard that independent voice, we are proud to count you, our readers, as our most important supporters. With your support, we can keep +972 Magazine a strong, independent, and sustainable force helping push the global discourse on Israel/Palestine.
DONATE
More About Ein Hijleh 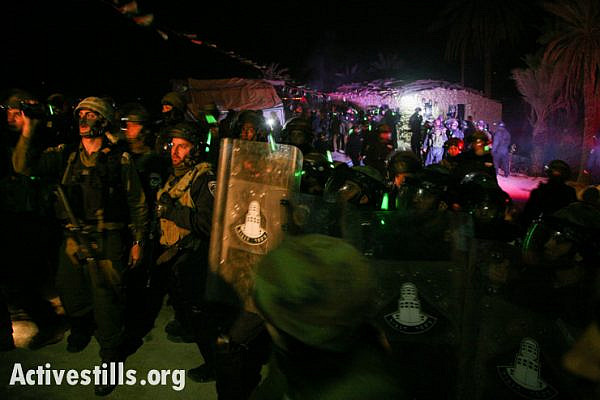 PHOTOS: Ein Hijleh village evicted after seven days of protest
One week ago, some 300 Palestinian activists established the protest village of ‘Ein Hijleh’ in a cluster of palm trees and long-abandoned houses north of the Dead Sea. Their goal was to protest Israeli government demands to retain control of the Jordan Valley as part of a U.S.-brokered peace deal. One week later, their encampment was…
By Activestills February 7, 2014 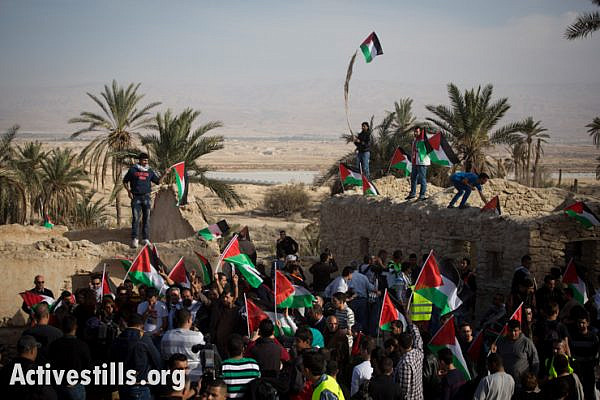 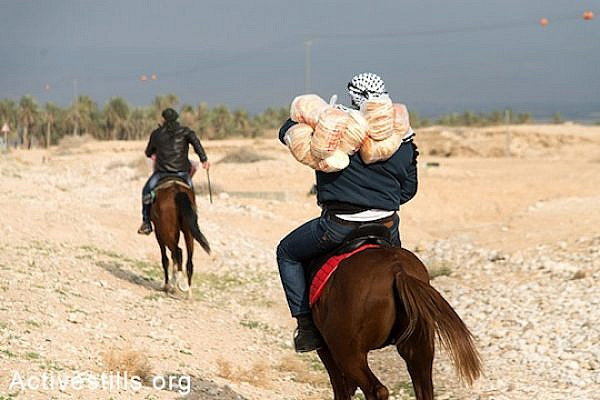