Every Saturday, African asylum seekers from the Eritrean community gather in a small park on De Modina Street in the Shapira neighborhood of south Tel Aviv. There, they hold memorial ceremonies for the loved ones who have died in Eritrea or in Sinai while on their way to Israel.

For years, these ceremonies have taken place every week with no sound system or speeches – just people sitting and crying together. This week, right-wing activists from the neighborhood announced an event on Facebook, calling on local residents to hold a picnic and “reclaim” the park. They claim the sound of people crying disturbs their sleep during the weekend, and that their children are afraid to play in the park.

Around 15 people gathered in the park at 8:00 a.m. on Saturday, February 15, while approximately 100 Eritreans started to arrived in the area. The right-wing protesters hung colorful balloons and made noise with whistles and chants to disturb the mourners. Slowly, the Eritreans stated to leave the park, some seemed to be scared by the protest, and some wanted to continue mourning in a place where people would not disturb them. 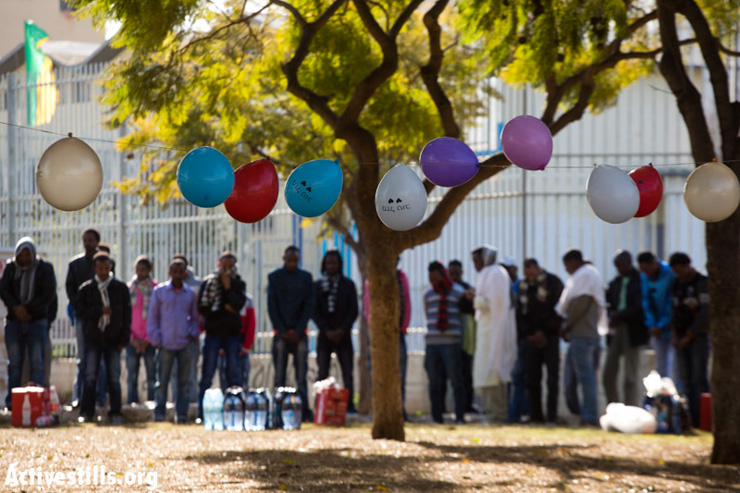 Eritreans mourn next to balloons hung by right-wing protesters A right-wing protester tries to attack a neighbor who came to support the asylum seekers.

Two neighbors who came to confront the right-wing activists and document the scene were attacked, when one woman took a stone and tried to throw it at them. Others told them, “You leftists are the real problem in south Tel Aviv. We know where you live, and you have one week to leave the area before we burn your house.”

Other residents who passed by the park and confronted the right-wing activists were also threatened: “No leftist will live in Shapira or other areas of south Tel Aviv. We will take you all out.” A right-wing protester blows a whistle to disturb the mourning ceremony of Eritrean asylum seekers. An Israeli policeman (right) holds a stone he took from a right-wing protester (center) after she tried to attack two neighbors. The woman was not detained or questioned by the police.

Police who arrived at the park chose to detain the two neighbors who were arguing with the right-wing protesters for “disturbing the public order.” The right-wing activists who tried to attack them were not checked by the police.

After the right-wing protesters celebrated their small victory of forcing the Eritreans out of the park, they said they will be back next Saturday to make sure no more memorial ceremonies will be held in the area. Policemen arrest one of the two neighbors who attempted to show support with the Eritrean asylum seekers mourning in the park. Following reader comments and a public discussion regarding this post, we found it necessary to clarify that not all participants taking part in the events consider themselves to be right-wing activists; some define themselves as local activists working for the betterment of the neighborhood and living conditions in it. Nonetheless, we stand fully behind the textual and visual description of the events as they occurred.

Activestills is committed to covering struggles in various arenas, among them the struggles of both Israelis and African asylum seekers for better living conditions. We thank our readers for their comments, which contribute to the much needed dialog between the different ethnic and political groups living in the neighborhoods of south Tel Aviv.
Get Our Weekly Newsletter