African asylum seekers march through central Tel Aviv to protest a law that deducts 20 percent of their wages. 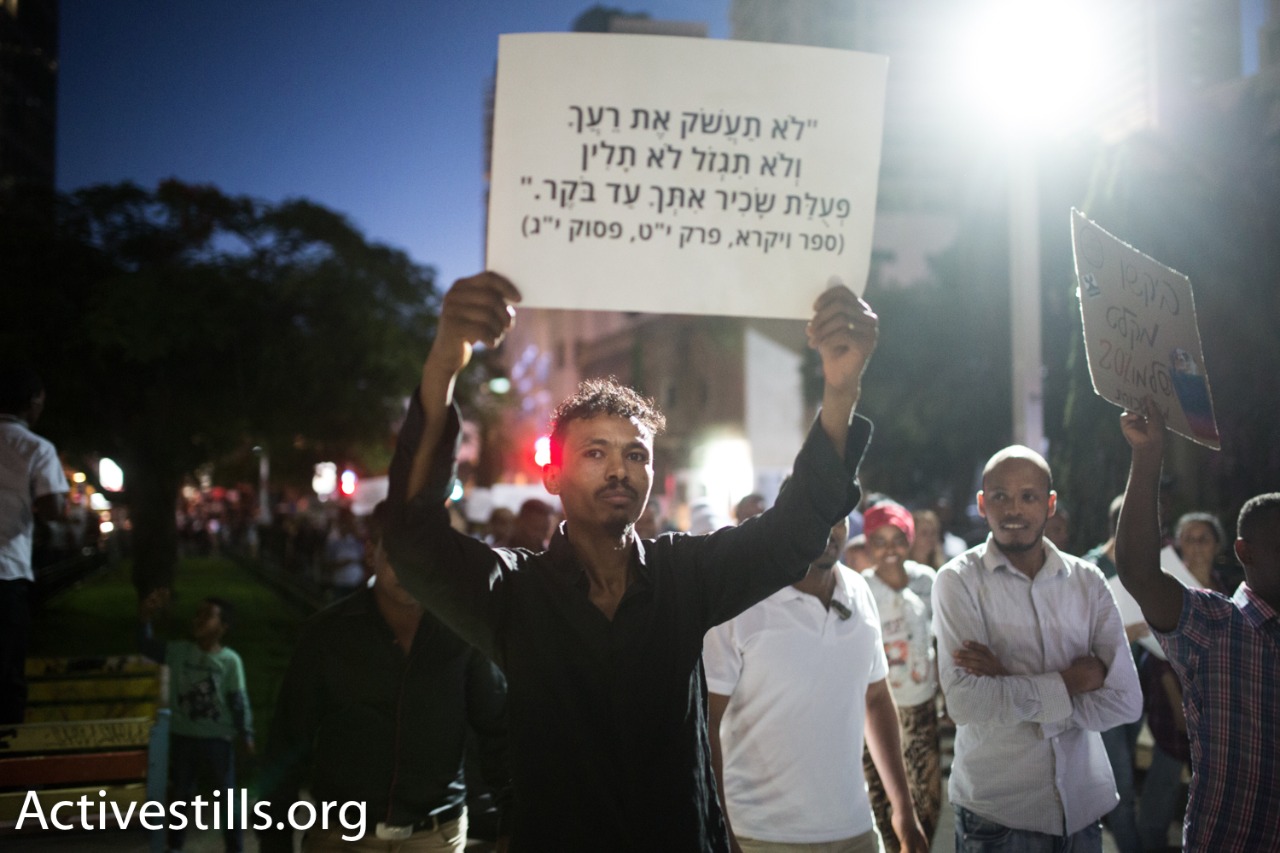 An African refugee marches during a protest against a new law to deduct wages from refugees, Tel Aviv, June 10, 2017. (Yotam Ronen/Activestills.org)

Over 3,000 Sudanese and Eritrean asylum seekers marched through central Tel Aviv Saturday night against a new law that docks 20 percent of their salaries, which will be repaid only when they leave the country. Marching alongside Israeli activists, business owners who employ asylum seekers, and residents of south Tel Aviv, the protesters chanted “We are refugees — not slaves!” as they walked through Rothschild Boulevard, the city’s main thoroughfare.

The members of Knesset behind the new law, which went into effect on May 1, did not hide their intention of withholding asylum seekers’ salaries as an incentive to push them to leave (despite the fact that the state has admitted that it cannot deport them, and that they have a right to live and work here). According to the law, employers of asylum seekers will have to deposit another 16 percent of the salaries into the fund, in addition to another fee they must pay for hiring asylum seekers and foreign workers. 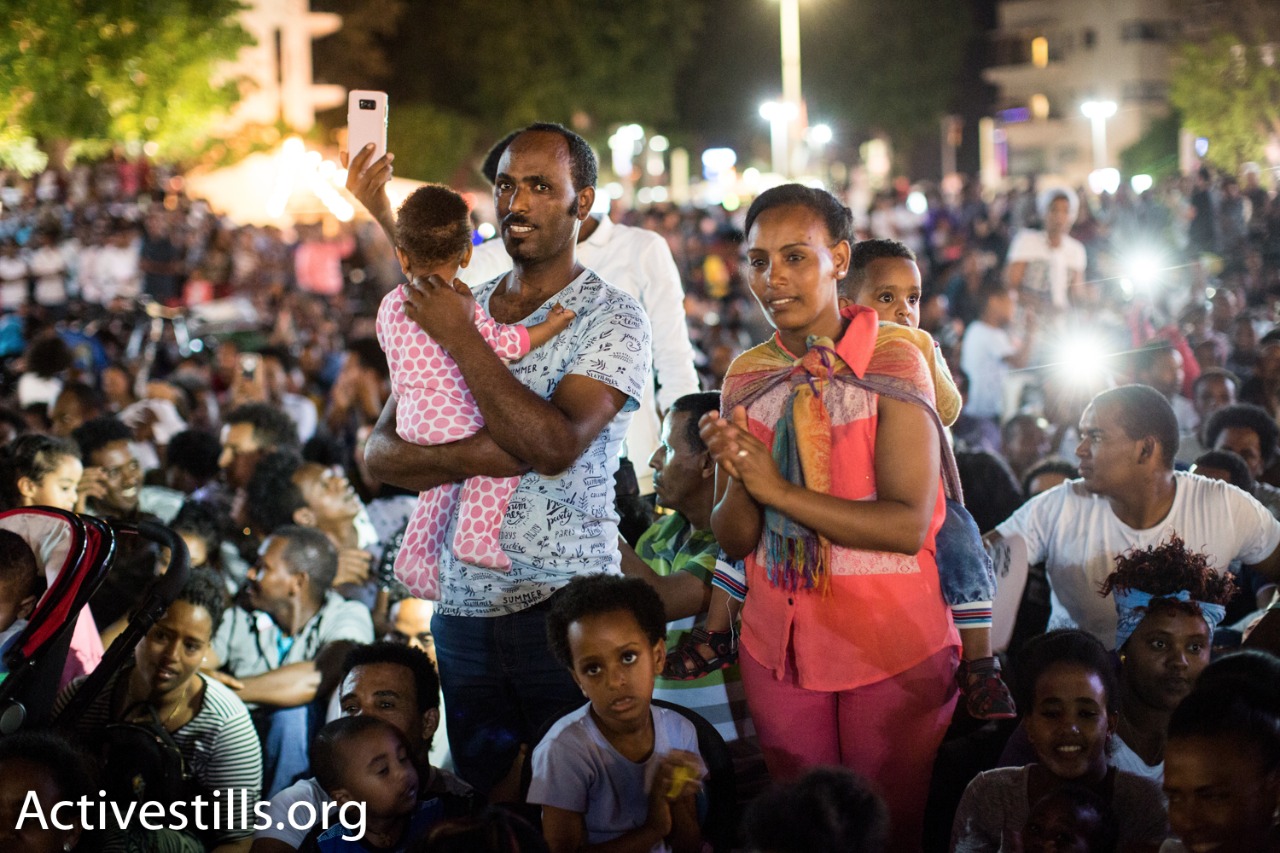 A family of asylum seekers seen during a protest against a new law to deduct wages from refugees, Tel Aviv, June 10, 2017. (Yotam Ronen/Activestills.org)

Following the march on Rothschild Boulevard, the protesters gathered in Habima Square for a demonstration. Merav Barzilay, the owners of Meshek Barzilay in Tel Aviv’s Neve Tsedek neighborhood, spoke to the crowd about her close relationship to her Eritrean workers: “This last month we were shocked to discover that we need to reach into our employees’ pockets and take 20 percent of their salaries. The state cannot expel them, but it expects us, the restaurant owners to do the dirty work and harm them. I am supposed to walk up to a worker who earns 5,000 shekels, take her money and give her only 3,500? We ask the High Court of Justice to reject this illegal law.” 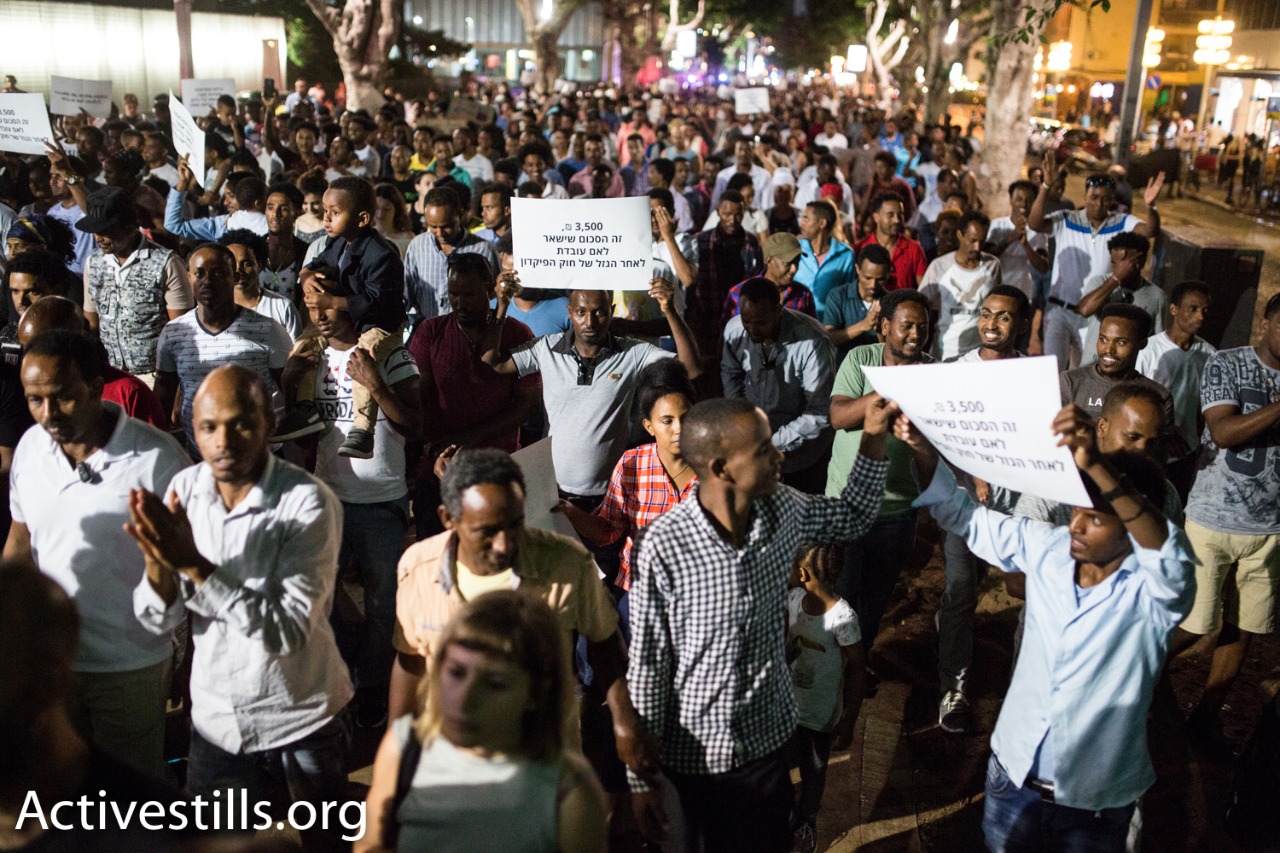 African refugees marche during a protest against a new law to deduct wages from refugees, Tel Aviv, June 10, 2017. (Yotam Ronen/Activestills.org)

“I am a mother of three children, I pay for rent, food, transportation, and more. I simply have no idea what to do,” said Eden Tesfamariam from the Eritrean Women’s Center. “It’s just not enough money, and I have no idea where to go. But I won’t leave Israel.”

Zehava Vaknin of “Power to the Community,” a group comprised of asylum seekers and long-time residents of south Tel Aviv, told the crowd that cutting asylum seekers’ wages will only lead to a deterioration in the conditions of all those who live in the southern part of the city.” 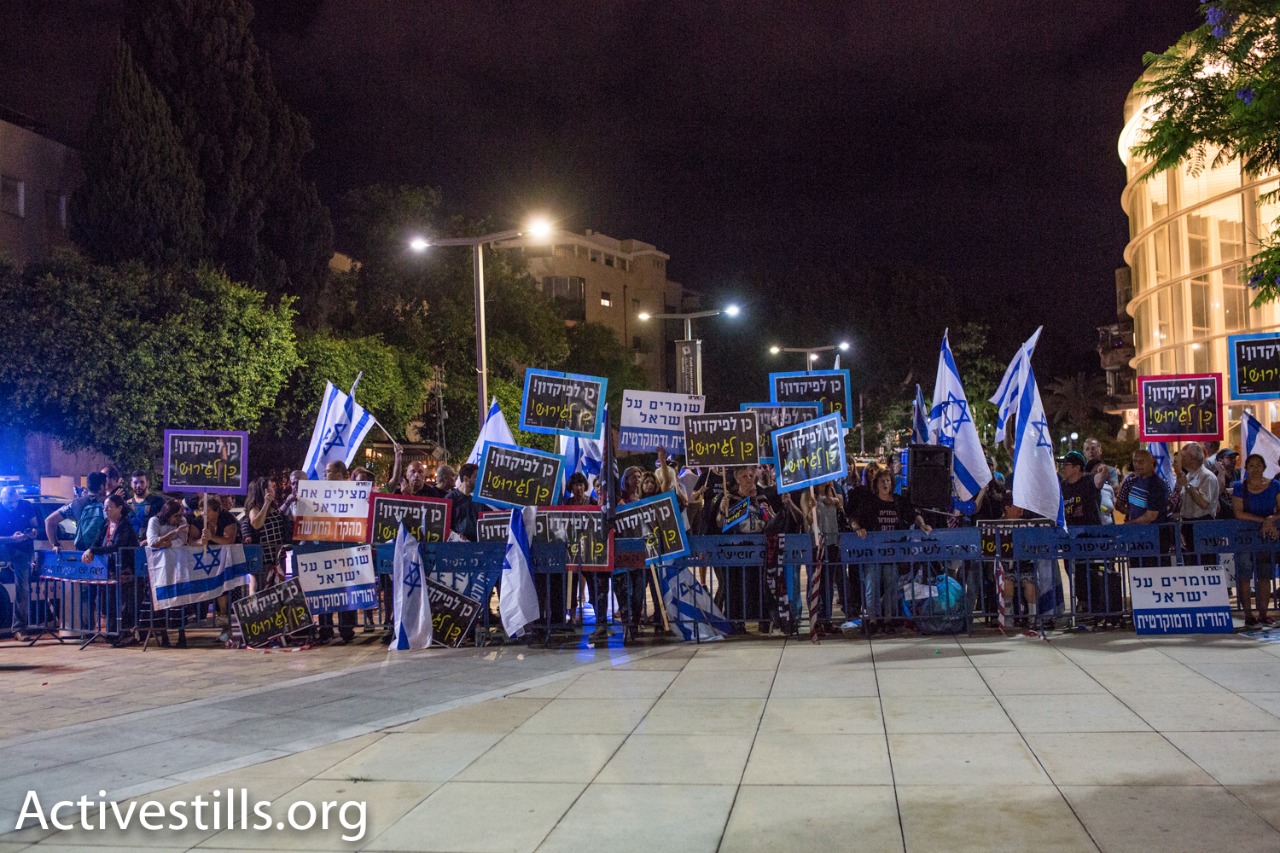 Protesters from the Front for the Liberation of South Tel Aviv and Im Tirzu hold a counter-protest against African refugees during a demonstration against a new law that would deduct their wages, Tel Aviv, June 10, 2017. (Yotam Ronen/Activestills.org)

“The goal of this law is to turn the southern neighborhoods into disaster area and make your lives unbearable, until you leave,” said Attorney Oded Feller of the Association for Civil Right in Israel (ACRI) during the demonstration. “The Israeli government knows it cannot deport them to Sudan or Eritrea, two of the worst dictatorships in Africa, so it does not deport them. But it leaves them in limbo when it does not grant them rights or status. No deportations, but they cause people to want to leave. Asylum seekers have been here for 10 years, and the time has come to say: Israel is a strong state, and it can deal with asylum seekers like other countries. It must recognize the fact that many won’t leave Israel… We must grant them status, social rights, health insurance, and the right to work anywhere in the country. We must stop with this idea that the worse off they are, the better we are. On the contrary.”

On the other side of the square stood dozens of protesters from the Liberation Front For South Tel Aviv, Im Tirzu, and others. The protesters chanted against “infiltrators and leftists,” expressing their support for the new law and for deporting asylum seekers.