The Israeli military, the IDF, is enjoying both widespread praise and criticism this week for the posting on its English-language Facebook page of a photo of two uniformed men holding hands. The photo was taken and distributed just days after Tel Aviv’s Gay Pride Parade, which attracted thousands of foreign visitors to Israel. Its distribution comes amid growing accusations that the Israeli government through its various ministries, is engaging in a public relations campaign dubbed “pinkwashing” – the touting of Israel’s record on gay rights as a diversion or deflection from the attention it has received over its treatment of Palestinians in the occupied territories. 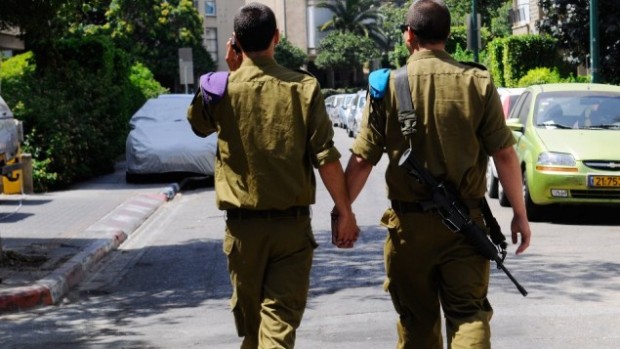 In the first two days, the photo generated nearly 9,000 “shares,” more than 10,000 “likes,” and more than 1,500 comments on the IDF’s Facebook page (ranging from “incredibly proud” and supportive to the expected accusations of “abomination”), plus countless other “chats” on the pages of various Facebook users who re-posted the picture. The uniformed men have their backs to the camera, making their identities almost impossible to ascertain. Those familiar with the berets fastened on their shoulders safely assumed that one serves in the elite Givati Brigade while the other is enlisted in the Artillery Corps. However, within 24 hours, it was discovered and confirmed that the photo was staged, that both men serve in the IDF’s spokesperson’s unit, and that one of the men is not gay at all, and thus, the two are not actually a couple, as effectively suggested by the photo. The Times of Israel, a somewhat new publication headed by the former editor of the relatively conservative Jerusalem Post, David Horovitz, was among the first to call the post “misleading.” The IDF told a writer from the publication, in response to its query, that:

The photo reflects the IDF’s open minded attitude towards soldiers of all sexual orientations. The IDF respects the privacy of the soldiers featured in the photograph, and will not comment on their identities.

But the IDF did not deny that the photo was staged.

Indeed, the IDF does have an open policy regarding the sexual orientation of its soldiers, and that should be applauded. While some gay men may use their sexuality (combined with a recommendation from a psychiatrist) to avoid military service, most serve and, if they chose, can serve openly, without risking official condemnation. Such a policy long precedes the United States’ repeal this year of “Don’t Ask, Don’t Tell,” and is one that by most standards measures up as more progressive than any other military in the world. And it goes even further, as pointed out by “GB” in one of the debates on the photo:

[The IDF] not only allows Trans[-sexual] soldiers to serve but also pays for their hormones while they are in service, as part of their medical benefits.

Which is, some would argue, one of the reasons why a staged photo is all the more upsetting. If the IDF is doing such wonderful things in terms of gay rights, can it take a real picture of one of them and use that instead?

But the photo has also raised some others questions. “GB” adds:

The Israeli army plays a huge role in shaping Israeli social consensus, so publishing a photo like that has a huge impact on promoting LGBT (Lesbian, Gay, Bisexual and Transgender) awareness and rights.

Indeed, Israeli society suffers from an incorrigible dose of machismo, much of it the effect of a military culture. That being the case, why was the picture posted only on the IDF’s English Facebook page and not the Hebrew one? Namely because it was not meant to change anything about Israeli society from the inside, but rather only influence public perception abroad. Arguably, that’s a shame and a missed opportunity. Many openly gay cadets serving in the military are frequently abused, most often verbally, though in some cases physically and sexually. Derogatory terminology for gays is used both in military and civilian life, with some-to-little discomfort for the majority of the population except, perhaps, in the condensed liberal metropolis of Tel Aviv. The contradiction between the IDF’s staged photo and this reality is highlight in a caricature by artist and +972 friend Mysh. 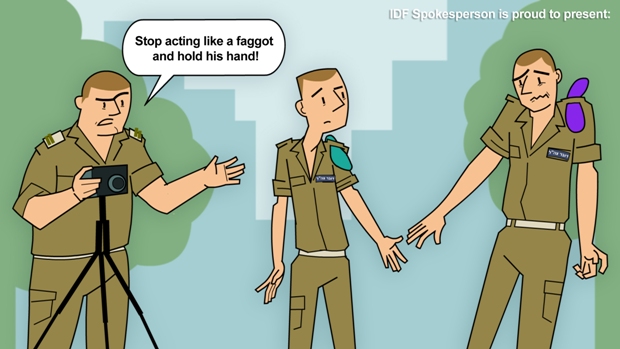 Earlier this year, a spokesman from Prime Minister Benjamin Netanyahu’s office tweeted a drafted version of a letter to be issued to pro-Palestinian activists arriving in Israel. As reported by +972’s Dimi Reider, in it, Spokesman Ophir Gendleman effectively asks the activists why they do not go protest in Syria or Iran or Gaza. Mr. Gendleman fails to realize that activism does not work like that. One cares for a cause and sticks to it. For a very long time. It is rare that an activist wakes in the morning and thinks, “Where in the world should I go today? What in the world should I protest today?” That is just not the case. Energy is a finite resource and one usually dedicates it to a cause that is close to one’s heart. 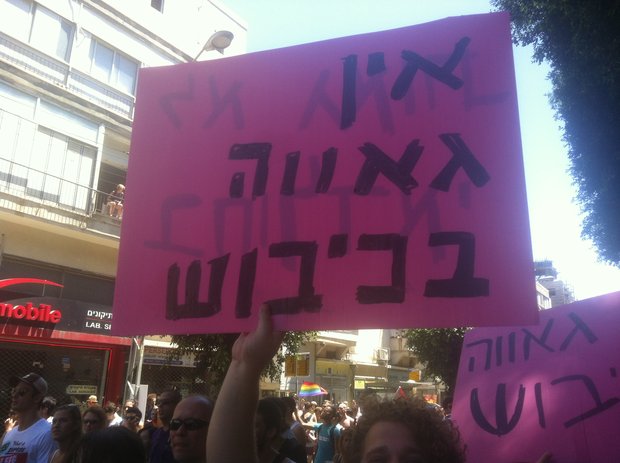 The same is true in reverse. There are those in Israel who have been fighting for the promotion of gay rights for years, undiverted by other causes. Undiverted, but not unsympathetic. In this year’s Tel Aviv Pride Parade, a few dozen people marched in a group holding signs that, among them, read, “There’s no pride in occupation.” The majority of gays and lesbians in Israel support an end to the occupation, even if they do little to show for it. But condemning one’s default allies is not wise. Those, like Columbia Law Professor Katherine Franke, who snubbed a global LGBT conference in Philadelphia earlier this year because it celebrated Israel’s record on gay rights (and then posted the reason for her decision on YouTube), are at best disrespecting Israeli gay rights activists, and at worst, doing a disservice to their cause. Essentially no different than Mr. Gendleman questioning why pro-Palestinian activists do not fight other causes, Professor Franke and fellow boycotters are effectively saying, “if you cannot find the energy to fight both causes, we won’t support you.” Actually, they are going one step further than not supporting them; they are working against them. 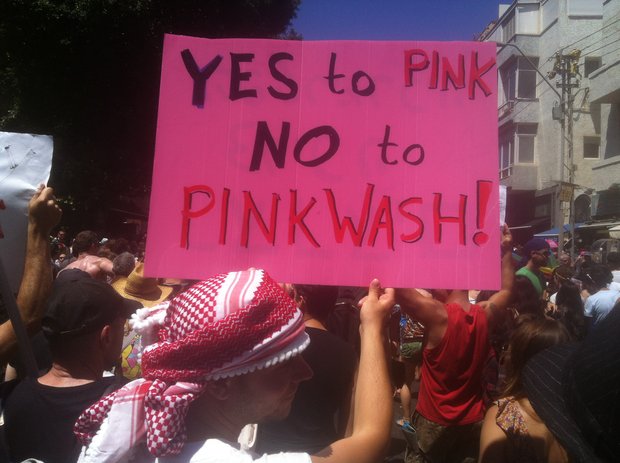 And that is the final reason why the IDF staged photo is troubling. The IDF’s cause is a military one. But the timing of this photo thrusts it into the “pinkwashing” debate. Why didn’t the IDF post the photo last year? Or the year before? Or the year before that? The status of gays in the military has not just undergone some drastic revision. So why now? The IDF should leave the “pinkwashing” debate to the diplomats and the activists.

Remember that while Tel Aviv held its 20th annual gay pride parade last week, Moscow police were arresting activists in the city who participate in an unauthorized parade. (A 100-year ban on “gay propaganda” in the Russian capital is now in its fifth year. And St. Petersburg recently adopted a similar measure.) 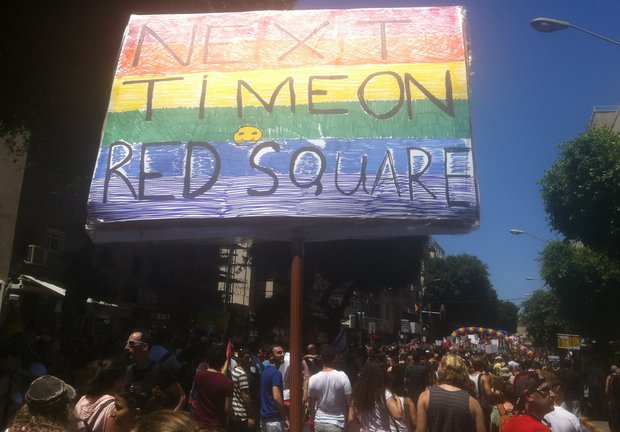 Remember that while Tel Aviv held its 20th annual gay pride parade last week, gay Palestinians who fear for their lives in the West Bank and Gaza still have to flee. Some hide out illegally in Tel Aviv. (This narrative is highlighted in the film “The Invisible Men,” screening this week at the Tel Aviv Gay & Lesbian Film Festival, which is ironically boycotted by “QUIT – Queers Undermining Israeli Terrorism.”) 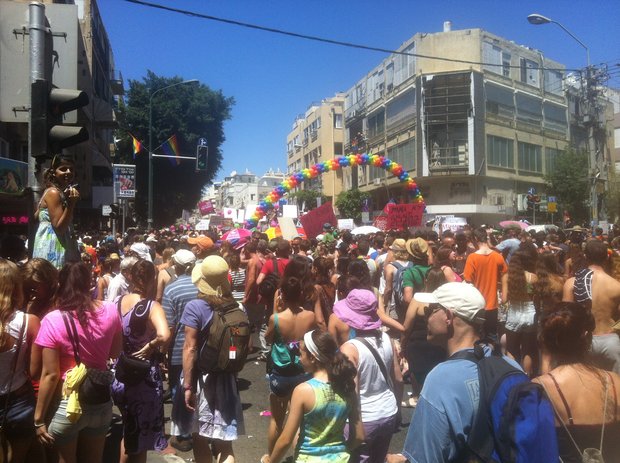 Remember that while Tel Aviv held its 20th annual gay pride parade last week, in South Africa on Tuesday, a gay man was brutally slain in his home in what police are calling a hate crime.

Remember that while Tel Aviv held its 20th annual gay pride parade last week, globally, 76 countries are said to have anti-gay legislation on their books – notoriously among them, Uganda – and almost all have a total ban on blood donations from gay men.

Remember that while Tel Aviv held its 20th annual gay pride parade last week, in Nairobi, two gay men were beaten by a mob in late May, while this week a gay Kenyan was stoned to death.