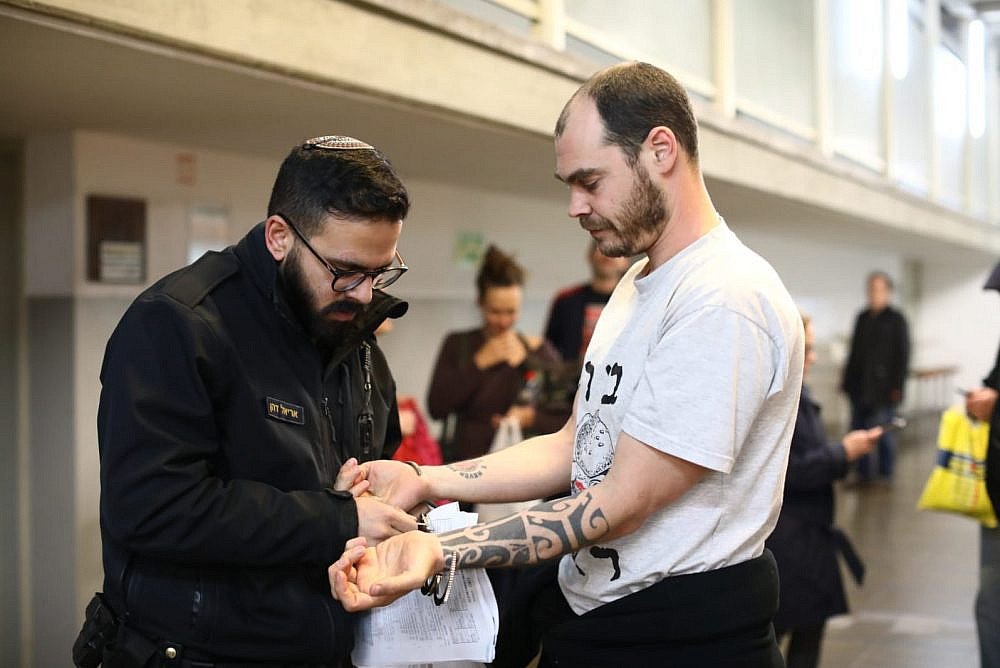 Jonathan Pollak, right, at the Tel Aviv Magistrate's Court after being arrested at his place of work, January 6, 2020. (Oren Ziv/Activestills.org)

Undercover police officers arrested prominent Israeli anti-occupation activist Jonathan Pollak at his workplace Monday morning, after he repeatedly refused to appear in court over a private prosecution filed against him by a far-right organization.

Witnesses said three officers arrived at the Haaretz building in south Tel Aviv, where Pollak works as a graphic designer, and took him into custody. Pollak later stated that around 15 officers were at the scene.

In December 2018, Local Call reported that far-right group Ad Kan launched a private prosecution attempt against three Israelis, including Pollak, for participating in protests against the West Bank separation barrier. Ad Kan’s private prosecution, the first of its kind against anti-occupation activists, accused the defendants of “attacking IDF soldiers and Border Police officers.”

When Israeli authorities did not see it fit to charge the three activists, Ad Kan — which came to prominence in the last few years for sending its employees to infiltrate human rights organizations and record their every move with hidden cameras — took matters into their own hands. The organization claims it was involved with Monday morning’s arrest, and noted that police had surrounded the area where Pollak works in order to prevent him escaping.

Pollak, however, repeatedly refused to appear in court, saying he did not recognize the legitimacy of a system that maintains a “military dictatorship” over “subjects that lack all basic democratic rights” in the West Bank and Gaza or are “second-class citizens” in Israel.

Despite two bench warrants issued against him at the request of Ad Kan in July and September, as well as an arrest warrant issued in December, Pollak continued to attend demonstrations in the West Bank and Jerusalem on a regular basis. Atty. Tzur Falk, who represents Ad Kan, noted in a recent hearing in the Jerusalem Magistrate’s Court that he repeatedly notified police in real time that Pollak was attending the demonstrations, yet the police did not arrest him.

Following the July bench warrant, police officers repeatedly arrived at Pollak’s apartment to take him into custody. When the officers were unable to locate him, Ad Kan requested that the court update Pollak’s address to that of the Haaretz building.

Since then, officers have come to Haaretz on several occasions, yet until Monday morning had been unable to locate Pollak. Atty. Felk even claimed that the police told him that Pollak’s co-workers were covering for him. Pollak’s repeated refusal to appear in court means he can legally be held in custody, indefinitely or until he agrees to post bail and attend hearings at the Jerusalem Magistrate’s Court.

“It is unbelievable that the police acts as the private militia of an extreme-right organization that filed a baseless private prosecution without any jurisdiction to do so,” said Atty. Gaby Lasky, who is representing the two other defendants in the prosecution. “It is sad that the court is lending a hand to such a severe violation of the right to liberty.”

Pollak was transferred from the police station to the Tel Aviv Magistrate’s Court on Monday afternoon. However, the court appeared unsure how to handle his case, and both the judge and the police seemed to struggle with Pollak’s refusal to participate in the proceedings.

During the hearing, Judge Hannah Klugman stated that Pollak could be released if he paid NIS 500 bail, adding that his statements to the court did not, in her view, justify his release.

Refusing to pay bail, Pollak said: “Engaging with these hearings would be a recognition of Israeli court’s authority to discuss its opposition to the same regime it represents. This is not a matter of money, and I do not intend to legitimize the court’s discussion of this matter.”

Pollak’s attorney, Gaby Lasky, requested that Pollak be released without conditions, given that the police failed to send a representative to the hearing. Lasky further requested that the hearing be delayed, arguing that the complaint from Ad Kan constituted “political persecution of activists by an extreme right-wing organization.”

Pollak will be brought before the judge a second time on Tuesday afternoon.

In July of last year, Pollak was physically assaulted by two assailants as he left work. The attackers reportedly yelled “leftist asshole” as they beat him before one of them pulled out a knife and lightly wounded him in the face and arms. Neither of the assailants have been caught.