A majority of the public wants the state to discriminate against Palestinians, says a poll published in Haaretz. The findings don’t reflect a failure in education, as some might argue, but rather the inherently discriminatory nature of the state and the result of decades-long occupation. 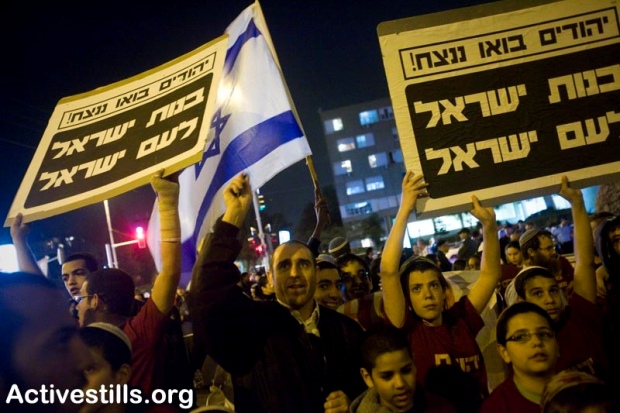 Far right-wing activists and local residents protest against what they claim to be a growing trend of Arab men courting Jewish women in the city of Bat Yam, near Tel Aviv, December 20, 2010. The Hebrew on the signs reads: “Jewish girls belong to the Jewish People.” (photo: Oren Ziv/ Activestills.org)

Gideon Levy reports in Haaretz today the findings of a survey that reveals deeply-rooted racism in Israeli society, and a desire of most of the Jewish public to practice ethnic segregation between Arabs and Jews. This is the front page story of Haaretz today. The poll was conducted by Prof. Camil Fuchs, one of the respected pollsters in Israel.

Palestinians make up 20 percent of Israeli citizens, and roughly 40 percent of the population under Israeli control (not counting Gaza). Almost half of Israeli Jews (47 percent) want Arab citizens stripped of their citizenship rights, and to be made part of the Palestinian Authority. It is an idea that Avigdor Lieberman and other elements of the right have been pushing for some time.

Were the West Bank to be annexed, a clear majority does not want voting rights to be granted to Arabs. At the same time, most Israelis don’t support annexing the West Bank. The poll therefore reflects the Israeli desire to maintain the status quo, a fact I have written about here.

It’s a well known fact that religious views can predict positions on the Israeli-Palestinian conflict in Israel, but there seems also to be a direct link between religious positions and racism. The ultra-Orthodox population expressed the most racist views, followed by the national-religious. This fact explains why many professionals, journalists and diplomats are not aware of how racist certain elements in Israeli society are, because they don’t often meet members of those groups. It also should put an end to the unfounded hope that the ultra-Orthodox will desert Netanyahu’s coalition. They might support a centrist party if the right is denied a Knesset majority, but they would generally prefer to stay with their constituency.

A note about the meaning of this poll. From my own personal impression on life in Israel, the findings are very consistent with the views you encounter in the public sphere. They reflect the widespread notion that Israel, as “a Jewish State,” should be a state that favors Jews. They are also the result of the occupation, which has completely dehumanized the Palestinians in the eyes of Israelis. After almost half a century of dominating another people, it’s no surprise that most Israelis don’t think Arabs deserve the same rights.

These positions are the result of legal discrimination and the status quo on the ground. While the Israeli government is ready to try and advance Palestinians on some fields, the dehumanization narrative dominates the political conversation, and there is zero readiness to challenge the inherent discrimination in the system itself (not to mention the occupation). This poll is therefore not a failure of education – as some might want to see it – but a problem inherent in the system itself. Only an end to the occupation and a move towards an egalitarian model of citizenship – “a state for all its citizens” – can bring the desired change in attitude by Jews. When the system treats Arabs as equal, public perception will follow.

emailemail
Before you go…
A lot of work goes into creating articles like the one you just read. +972 Magazine is nonprofit journalism, owned by many of our writers, editors, and journalists. In order to safeguard that independent voice, we are proud to count you, our readers, as our most important supporters. With your support, we can keep +972 Magazine a strong, independent, and sustainable force helping push the global discourse on Israel/Palestine.
DONATE
More About the only democracy in the middle east